A version of this post was written by Adam Rein and originally appeared on ImpactAlpha.

Quick! What do these issues have in common: food insecurity, water conservation, economic development, and climate change?

Pressing social and environmental concerns can be addressed by reducing food waste. Tweet This Quote

A new Roadmap to Reduce U.S. Food Waste by 20 Percent from the nonprofit consortium ReFED, shows how even a modest reduction of food waste over the next decade could yield $100 billion in positive societal economic value, including nearly $6 billion per year in consumer savings on food bills and $2 billion per year in new business profit potential. The Obama Administration last year set a goal to cut U.S. food waste in half by 2030.

The amount of food wasted around the world is absurd, as documented by organizations such as NRDC and National Geographic. In the U.S., up to 40 percent of food that is grown for human consumption is never eaten.

Food waste reduction over the next decade could yield $100 billion in positive societal economic value. Tweet This Quote

That’s $218 billion (yes billion with a “b”), or 1.3 percent of U.S. GDP each year that is spent growing, processing, transporting, storing, and disposing of food that mostly ends up in landfills.

As consumers, we see this every day—a half-filled carton of milk thrown away a day past its “sell by” date, a tub of salad mix that wilts before we can consume it all, or chicken bones and stale bread that have no easy way to be composted.

When perfectly good food gets tossed at a restaurant or dinner party, we wonder why there isn’t an easier way to get it to people in need. In total, about 400 pounds of food is wasted for every American each year.

Solutions have often been obscured by the complexity of the food value chain. Now, a broad coalition of stakeholders has built a rigorous economic analysis and action plan to reduce food waste nationwide that can be implemented today.

1.3 percent of U.S. GDP each year is spent on food that mostly ends up in landfills. Tweet This Quote

ReFED, an initiative guided by our team at MissionPoint Partners, found that food waste can be cut by 20 percent from a combination of 27 solutions that are cost-effective, feasible, and scalable today. That would divert 13 million tons of food from landfills and on-farm losses.

The ReFED coalition includes more than 30 industry leaders and organizations committed to reducing food waste at scale, including Ahold, EPA, Feeding America, City of Phoenix, NRDC, Sodexo, Walmart, and Waste Management. Sodexo, for example, the leading foodservice provider and one of the 20 largest employers in the world, recently announced a goal of reducing all avoidable food waste within its 33,000 locations by 2025. 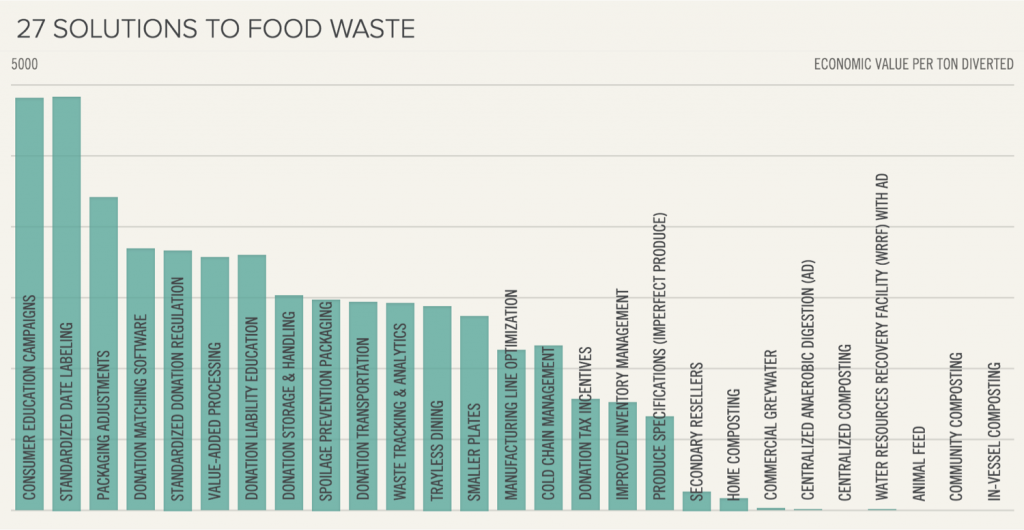 Graph from “The Roadmap to Reduce U.S. Food Waste by 20 Percent” report.

Each year, about 400 pounds of food is wasted for every American. Tweet This Quote

Importantly, the roadmap identifies a range of attractive opportunities for impact investors. To achieve $100 billion in societal economic value over a decade will require an estimated $18 billion investment.

That’s less than a tenth of a penny of investment per pound of food waste reduced, from private, government, and philanthropic sources of capital. Most government funding will stem from existing legislation and private capital will flow from market forces.

By reducing food waste at scale, we help protect the environment, alleviate poverty, boost the economy, and reduce the tax burden of government. Tweet This Quote

The key gap is $100 to $200 million in catalytic capital per year to de-risk new innovations and projects, unlock industry bottlenecks, and stimulate projects with outsized impact. Currently, it is estimated that less than $10 million per year of foundation funding explicitly targets food waste, and few investment funds focus on this emerging sector.

ReFED has already gathered a list of over 100 potential innovators, many of which have been ignored to date. Here are some examples of catalytic funding opportunities currently looking for capital:

Few solutions offer as much impact leverage for every dollar invested as food waste reduction. Tweet This Quote

Food waste is a solvable problem. Few solutions offer this much impact leverage for every dollar invested. The Roadmap to Reduce U.S. Food Waste by 20 Percent offers a plan that can gain bipartisan support, as it does not require major tax increases or regulations to implement. Find out what you can do at www.refed.com.