Our team at Unreasonable Group strives to give entrepreneurs best positioned to define progress in our time an unfair advantage.

The good news is that, of course, we are not the only ones trotting on this path towards achieving social, economic, and political progress. As a hallmark example, let’s look at one institution that has inspired and shaped much of our thinking at Unreasonable to date: the United Nations.

As you may know, in September of 2000, the United Nations brought together 189 countries that collaboratively signed what were called the Millennium Development Goals (or MDGs), committing themselves – amongst many other goals – to halving the number of individuals living in extreme poverty by 2015 (i.e. individuals living on less than $1.25 a day). This was a real moment in history, and it shouldn’t be overlooked. At the time, the MDGs represented the single largest gathering of world leaders. Ever.

Over a trillion dollars was invested in development assistance during the course of the MDGs between 2000 and 2015. Tweet This Quote

Beyond this astronomical number, philanthropic giving also skyrocketed. Total contributions in the U.S. alone across philanthropists, foundations, and donations from corporations reached an estimated $373 billion in 2015, setting a record for the second year in a row.

So with many trillions of dollars and 189 nations supporting the MDGs, what was the end result on the number one goal of halving the number of people living in extreme poverty?

A Reason to Celebrate, Yet Recalibrate

Reading this excerpt from the report, it would seem we should all be celebrating. But in reality, if you look at the data more closely, I think you may agree with me that we should be inclined to feel otherwise.

According to the World Bank, during the last 30 years, about 790 million individuals in China were lifted out of absolute poverty. An incredible feat indeed, and one that should be applauded and studied by the rest of the world. But this, of course, skewed the UN’s data significantly. The World Bank goes on to estimate that 72 percent of poverty reduction in the developing world in the past 30 years happened in China. So what of the rest of the world?

50 million more people live in poverty on the African continent today than in 2000. Tweet This Quote

Let’s zoom into one region in particular, the one hardest hit by poverty. In Sub-Saharan Africa, between 2000 and 2015, according to a 2016 report also conducted by the World Bank, because of population growth, the most optimistic scenario shows that there has been an increase in at least 50 million individuals now living in absolute poverty in 2015, who weren’t in 2000. We as a global community spent trillions of dollars and carried out the largest global accord of world leaders in history, and yet 50 million more people live in poverty on the African continent today than did in 2000.

Albert Einstein is famous for his definition of insanity: “Doing the same thing over and over again and expecting different results.” Something needs to change. Clearly, our traditional approaches are falling short of achieving our goals as a global community.

And this brings us to today. Immediately following the 2015 deadline of the MDGs, the UN announced a new set of goals to be reached by 2030 known as the Sustainable Development Goals (SDGs). This time, instead of 189 nations signing onto the goals, 193 member states of the United Nations did. The new Global Goals now mark the largest signed pact amongst world leaders in history.

And to be clear, the SDGs have a more ambitious agenda than the MDGs did, seeking to eliminate rather than reduce poverty and including more demanding targets on health, education and gender equality. They are universal, applying to all countries and people.

We are scaling companies that are already effectively addressing our most stubborn global challenges with profitable models. Tweet This Quote

So what are we going to do differently to ensure different results?

It is this question that is at the root of a new initiative we are launching in collaboration with the U.S. Department of State, aptly branded Unreasonable Goals. Rather than leaning on patterns of development that have failed us over the past century, we are looking to the world’s most effective solutions on the bleeding edge of what is possible, and we are scaling them through unlikely partnerships with some of the largest institutions of our time.

As you read this, you may very well be thinking, “Not another accelerator for entrepreneurs promising to end poverty through startups.” I’m happy to let you know that our approach will be unique. Rather than working with early stage companies and prototypes that could have the potential for grand impact on the world, we are scaling companies that are already effectively addressing our most stubborn global challenges with profitable models.

We just selected the companies, and on average, they have each already secured $18.8M in financing and generated $12.5M in revenue. They have operations in over 50 countries. In short, their solutions work. Now, we just need to scale what works. This is the premise of the Unreasonable Goals partnership. Let’s find the 17 most effective entrepreneurial solutions to the 17 Sustainable Development Goals and radically increase our odds of meeting the Global Goals by 2030.

An Unreasonable mentor and personal hero of mine, Paul Polak, who is responsible for bringing an estimated 21 million farmers out of poverty through the organizations he founded, put it better than I ever could when he said this: “It is not a question of ideology, it’s a question of what works.”

So What Are We Actually Doing?

Once a year, we will host multi-week programs through 2030. At these annual gatherings, we will bring together 17 growth-stage entrepreneurial solutions and wrap the participating entrepreneurs with world-class mentors. We will strive to drive not millions but billions of dollars of investment into their solutions, and we will give them access to an exclusive global network designed to help them scale further, farther, faster.

When it comes to solving the SDGs, we believe impatience is a virtue. Tweet This Quote

Knowing the SDGs are global goals, each year we will run the gathering with a new international portfolio of entrepreneurs and with a new country as our national host.

By 2030, we will have worked with over 200 high-profit and high-impact entrepreneurs worldwide, we will have partnered with a cadre of multinationals, and we will have worked directly with 13 national governments. This is where the real impact of Unreasonable Goals comes into focus. It’s this collective global network and this hodgepodge of public and private actors – all oriented around scaling what works – that we believe will help ensure we achieve the SDGs by 2030.

I’m privileged to say that for the inaugural Unreasonable Goals program, we have partnered with the U.S. State Department as our host partner and Johnson & Johnson as our cornerstone multinational partner. This summer, just outside of Washington D.C., we will bring together what we believe will mark the world’s most impactful portfolio of entrepreneurial solutions and technologies to solve the SDGs.

We chose to announce this new initiative on stage at the Global Partnerships Week’s opening forum because Unreasonable Goals will only succeed if we are pathologically collaborative.

If you are a company, institution, or foundation eager to reach the lofty vision of the SDGs, I hope you will join us. Tweet This Quote

For July’s up and coming program, we are looking to bridge 17 partnerships with 17 multinationals and foundations, each of which will underwrite the support of a particular SDG, just as Johnson & Johnson has chosen to support and collaborate with us on Goal #3: Good Health and Well-Being. Though time is limited, as the program kick-starts in July, when it comes to solving the SDGs, we believe impatience is a virtue. If you are a company, institution, or foundation eager to reach the lofty vision of the SDGs, I hope you will join us.

In closing, I want you to imagine the world in September of 2030. When we look back and track the world’s efforts to reach the Sustainable Development Goals, we have succeeded. In 2030, imagine that we, as a global community, have eradicated poverty in all its forms. What would that world look like?

Towards that vision, this is my formal invitation. Join us. You can find out more information and identify multiple ways to get involved on our new website unreasonable-goals.com. 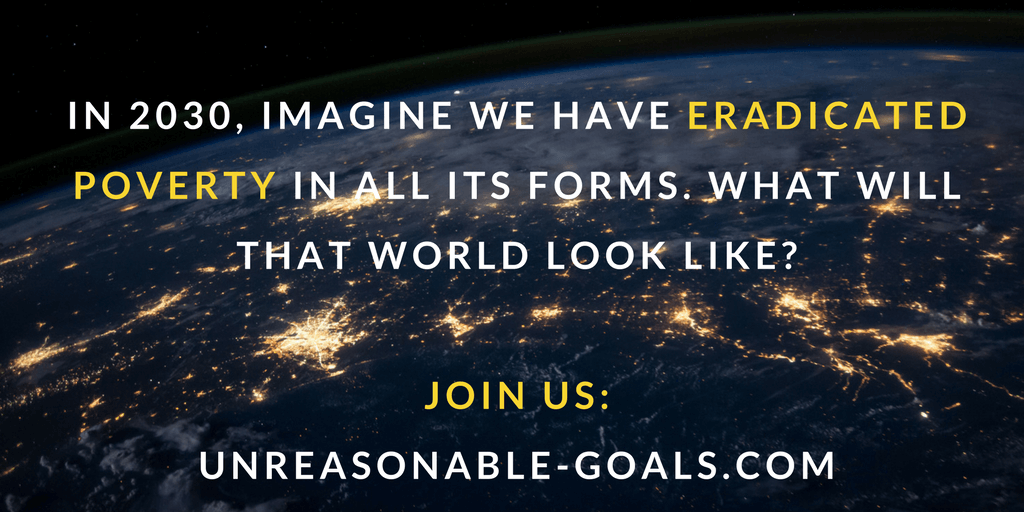 Of course, I would be remiss if I didn’t wrap up this post by saying thank you. If you took the time, thank you for reading through this initiative announcement, and thank you for the future partnerships I know we will work towards. Once more, thank you to the U.S. State Department and Global Partnerships Office for being our founding partners and for helping to ensure Unreasonable Goals wasn’t just a pipe dream, but rather a reality.

The Future Is Full of Female Entrepreneurs

The Future Is Full of Female Entrepreneurs