A Hyper-Local Model for a Global Water Problem

This is the last post of a 14-part series on entrepreneurship in Africa and the companies who participated in the inaugural Unreasonable East Africa program.

Randy Welsch, a retired software executive, was advising for several charity-backed water projects in Africa when he became consumed by the belief that he could do better. While clean-water access is a pressing issue—3.4 million people die every year from water-borne illnesses—nearly half of all donor-backed projects like those he was working on fail within three years.

Welsch felt this was primarily due to lack of local ownership (research backs him up on this). After consulting with his son, Galen—a former Peace Corps volunteer—the idea of locally owned and driven business was solidified, and they set about to change things.

We’re financing businesses with a razor-sharp focus and expertise in water purification. Tweet This Quote

So Randy and Galen Welsch and his son founded Jibu, a water project based on a hyper-local franchise model that ensures key decisions are made on a community-by-community basis, by the people who live in them, rather than from a central office or by teams of foreign volunteers.

Jibu franchises water stations that sell refillable jugs of purified water. The company operates on a turnkey model, licensing franchisees at a $1,000 co-investment, which provides them with a startup package that includes water-purification equipment, refillable bottles, packaging, point-of-sale systems, branding, and business training. Once a Jibu shop is up and running, customers purchase refillable containers of water for around five cents per liter. They return the empty jugs, which the Jibu station refills to be sold again—basically the same model used for the propane tanks that fuel American barbecue grills.

While the Welshes have spent considerable time and expense researching affordable purification technologies and assembling their startup package, their real goal consists of two components: First, to act as financial backers for potential franchisees by financing the initial $1,000 outlay. And second, to provide continual strategic and logistic support. That way Jibu is less a chain of cookie-cutter outlets and more a loose network of individual small business owners all working together in the water industry.

“The reality is that Jibu is a bank and franchise,” says Galen. “It’s financing businesses with a razor-sharp focus and expertise in water purification.”

The Welsches incorporated Jibu in 2012 and, since 2013, have been refining their model in three test stations—one each in Rwanda, Uganda, and the Democratic Republic of Congo. Their goal now is to have at least 400 up and running across East Africa by 2020—enough to provide water to about 15 percent of that region’s population within about 1.5 miles of a Jibu station.

The Welcshes incorporated as an L3C (limited-liability, low-profit corporation), a permutation of an LLC that requires a benefit to society before profit. They settled on a three-tiered structure, with corporate headquarters in North Carolina; regional developers throughout Africa, who are responsible for recruiting and supporting franchisees; and the franchisees themselves. 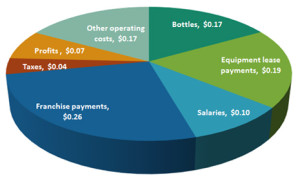 Galen says franchisees should be able to recoup their initial $1,000 outlays in around three months. At that point, franchisees pay 12 percent of their revenue each month to their regional developers and a $500 monthly royalty fee that is split between Jibu corporate and regional (the fee differs by region and projected revenue). The Welches use profits from royalty funds—driving local growth organically—to finance new franchisees, develop new equipment, and provide developers and shop owners with ongoing business, logistical, and technical training.

In order to prevent monopolistic price gouging, each franchisee serves customers within only a roughly 1.5-mile radius and at prices they have agreed on with Jibu. “We control prices as part of the franchise agreement to ensure we are hitting target market and not competing with upper-class water bottlers,” Galen says. And for people unable to afford even Jibu’s prices, the company has partnered with various NGOs and charities to establish a Jibu Water Club to supplement their purchases.

“We’re on to something here,” says Galen. “The interest from end users and franchisees gives me the feeling we’re on the brink of taking off.”

Nate is a thinker and instigator who occasionally tries to write, sometimes on UNREASONABLE.is.