How Apple Is Dropping the Ball In India

pple’s prospects for the iPhone look dim in China, with declining market share and competition from more advanced products. That is one reason why Apple is now focusing on the second-largest smartphone market in the world: India.

“I sort of view India as where China was seven to 10 years ago from that point of view,” Apple chief executive Tim Cook said during an investor call last year. “I think there’s a really great opportunity there.”

Apple plans to begin manufacturing smartphones in India, starting with the smaller and cheaper iPhone SE, according to the Economic Times. It is also marketing a discontinued version of the iPhone 6 through online retailers for a discounted price of $450 — because its products can’t command the same premium prices there, CNET reports. This comes after Apple repeatedly failed to get permission from the Indian government to import refurbished phones because of concerns that it would use India as a dumping ground for old technologies.

Apple is repeating the mistakes it made in China. It is relying on its brand recognition to build a market and failing to understand the needs of its customers. By marketing inferior products, it may also be insulting Indian consumers.

Smartphones with capabilities similar to iPhones sell for a fraction of the iPhones’ cost, and Apple enjoys practically no brand recognition among the hundreds of millions of Indians who are buying their first devices. It also does not have any form of product lock-in as it does with western consumers who have owned other Apple products and are now buying smartphones.

What’s more, Apple has not customized its phones or the applications for them to the needs of Indian consumers; they are the same as in the United States. Try asking Siri to recognize an Indian name or city, and it is clueless. Try asking it to play a Bollywood tune, as I have, and you’ll also be banging your head against the wall. And forget having support for Indian languages: Everything is in English.

Apple does offer an Indian version of its music-streaming service, but it is expensive and largely inferior to those of local competitors, such as Saavn, Gaana and Hungama. It also has the same problem as the Apple India App Store: It requires credit cards, which less than 1 percent of the population have.

This is no way to conquer a market.

Well-to-do Indian consumers who can afford iPhones want the latest and greatest, not hand-me-downs. They aren’t buying iPhones because they are technically superior; they are buying them for social gratification.

And Apple doesn’t even come close on price. Take the Lyf phones that telecom giant Reliance Industries is marketing. Its lower end smartphones sell for $45 and come with three months of unlimited data, text and calls. Higher-end models cost about $150 and have features comparable to the iPhone 7, which sells for $750 and higher. 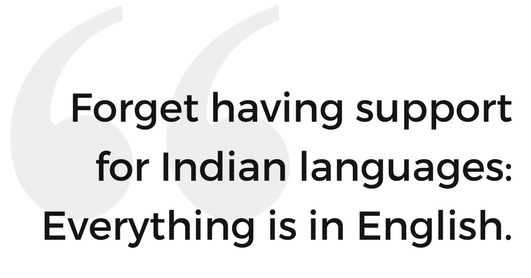 Until recently, Samsung and India’s Micromax dominated the Indian market. But Chinese brands — such as Vivo, Xiaomi, Lenovo and Oppo — are making major inroads, now enjoying 46 percent market share, according to Counterpoint Research. These companies offer stunning OLED displays (which Apple does not yet offer), state-of-the-art processors, and features that are popular in Asian markets, such as dual-SIM capabilities and selfie cameras. The phones are also available in different Indian languages. They use Google’s operating system Android, which enables them to have the Google Assistant converse in the Indian languages, including Hindi, that the assistant is learning.

It is also notable that Android has 97 percent market share in India. This means that there is little motivation for Indian developers to write software for the Apple platform and it will always be a laggard for hot new apps.

Apple typically sells its products online or through its very high-end retail stores. FactorDaily says the company is planning to open three Apple stores in India this year. But this is not the way to reach hundreds of millions of people in villages and small towns. Chinese vendor Oppo, for example, achieved great success by selling through 35,000 electronics retailers and setting up 180 service centers, according to Bloomberg.

If Apple is serious about entering India, it needs to do more than assemble components and open stores there. It must develop new products and services that suit the Indian market, and it should buy local competitors, such as Saavn and Gaana. With 500 million more people about to be connected to the Internet via smartphones, the opportunities are endless.

Improving Job and Food Security for 30 Million Farmers in India

Improving Job and Food Security for 30 Million Farmers in India