What We Do vs. What We Care About: The Blind Spot of Two-Pocket Thinking

once talked to a successful businesswoman and philanthropist — let’s call her Jane — who had set up her own foundation to give money to educational causes.

I was trying to convince Jane to invest in an education technology startup that had been improving student outcomes in low-income schools, and rapidly growing. Jane looked perplexed. She said, “Ross, I have two pockets. In my business pocket, I make as much money as I can. When I have enough to provide for my family, I give generously from my philanthropy pocket.”

She looked at me and asked, “Which pocket are you asking about here?”

Jane helped illuminate a concept I’ve come to think of as “two-pocket thinking”: the idea that “what we do for a living” and “what we really care about” live in entirely separate spheres. Two-pocket thinking is everywhere, it’s easy to understand, and it’s wrong. It’s a blind spot in how we invest our money that’s bad for business, and bad for society.

It’s also a helpful frame for understanding why the recent announcement from the Ford Foundation — that over the next decade, they’ll dedicate $1 billion of their endowment toward mission-aligned investments — is such a big deal.

You likely know the world’s biggest foundations: Gates, Rockefeller, Ford. Here’s what most people don’t know: incredibly, foundations are only required to give five percent of their assets to charitable causes each year.

What happens to the other ninety-five per cent? Most of the time, foundations will hire an asset manager or big investment bank to invest it in the capital markets — just like if they had never started the foundation in the first place. Sometimes these investments can even run counter to the foundation’s mission: if, for example, you are a foundation that supports economic opportunity in distressed areas, you might be surprised to find out that your endowment is invested in a public company that is automating, offshoring, or otherwise eliminating jobs while paying its management incredible sums of money.

Harvard has a $35 billion endowment, and is only required to spend $1.75 billion of that a year (at a school where tuition, room, and board is $63,000 a year). Asset managers for Harvard made $175 million in 2015. As Malcolm Gladwell once quipped, “I was going to send a donation check to Yale. But maybe it makes more sense to send a check to a hedge fund of my choice.”

This five percent norm is two-pocket thinking at its most stark. The businesswoman Jane was skeptical about making an investment in a for-profit venture, even if it was accomplishing the mission to which she was devoted. Likewise, most foundations are trying to change the world, but they’re doing it with their hands largely tied behind their backs. The value of all the public companies in the world, added up, is over $300 trillion. 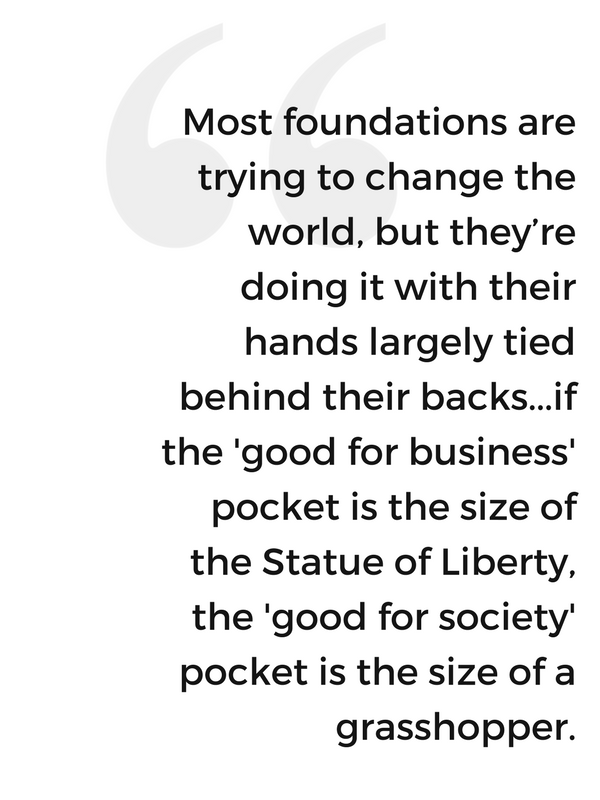 All this explains why Ford’s announcement is such a big deal. Darren Walker, the Ford Foundation’s CEO, announced that over the next decade, $1 billion of Ford’s $12.5 billion endowment will be invested in funds that seek to make a market-rate return and are also also aligned with the Foundation’s mission.

For Ford, this means making investments in affordable housing in the United States and financial services for people in developing countries. For other foundations, which will hopefully follow their lead, it could mean investing in companies that have diverse leadership teams and board, community banks that are re-invigorating small business in the middle of the country, or funds that support entrepreneurs solving thorny social problems.

Just as importantly, diversifying the endowment from a consolidated “one size fits all” strategy to mission-aligned uses will create competition among fund managers and investors for Ford’s very large endowment, creating more holistic and better ideas. It’s a one-pocket strategy.

Ford is not the only foundation to make moves towards a one-pocket world. The FB Heron Foundation announced in 2012 that they would deploy 100 percent of their assets in alignment with the foundation’s mission, the culmination of a ten-year strategy. The Rockefeller Brothers Foundation, set up with money from Standard Oil, announced in 2014 that they were divesting from fossil fuels. And I’ve talked with many more foundations that are beginning to see the limitations of two-pocket thinking, as they accelerate a one-pocket world.

Why aren’t more foundations one-pocket? Foundation trustees would say that they are fiduciaries over their endowment, and they need to grow the endowment to grow the mission. If the Ford endowment loses money, Henry Ford’s original bequest matters less. If Harvard and Yale see losses in their endowments, they can offer less to students.

I disagree with this point of view. It contains a faulty assumption: that if I integrate “what’s good for society” into my business decisions, I’ll lose money. But the evidence doesn’t support this. In a 2014 study, Cambridge Associates illustrated how funds that intentionally integrated social impact and financial returns performed similarly in developed markets, and outperformed in emerging markets. And a 2015 Wharton study showed that smaller funds that integrated purpose likewise outperformed those that didn’t.

If you’re reading this, you can help accelerate a one-pocket world. If your university asks you for money, you can ask where its endowment is invested (because chances are that 95 percent of your check will go to that, not the program they are asking for). If you are fortunate enough to have a foundation (or work for or sit on the board of one) then ask, “How can we solve our foundation’s problem with 100 percent of our endowment, not just 5 percent?” The Ford Foundation made this change because of a multi-year Herculean effort led by Darren Walker, and if you’re interacting with an institution that has an endowment, you can play a similar role.

eBay Founder Pierre Omidyar, who runs the Omidyar Network with a one-pocket strategy (they make grants and invest in companies that align with their mission) — once said that he hated how philanthropy was described as “giving back.” He said, “’Giving back’ implies, at one point, that you were taking. We’re dissociating what we do from what we value, and it’s becoming very difficult to improve the world as a result.” I’m excited to see the Ford Foundation take one of the biggest steps yet to building a one-pocket world.

This originally published on Medium.