One in nine people still go to bed hungry every night. Because of rapid population growth, the demand for livestock is expected to more than double by 2050, making it increasingly difficult to supply enough protein to nourish everyone. This pressure on the planet also amplifies greenhouse gas emissions and water scarcity. We have no choice but to discover alternative ways to feed people.

What most people in western markets fail to realize is that insects have been a staple in many diets for thousands of years. Two billion people eat insects regularly today, including crickets, which require six times less feed than cattle and consume only one gallon of water compared to 2,500 gallons for a single cow. According to the United Nations Food and Agriculture Organization, edible insects may be the protein source that provides the food security we need to survive. 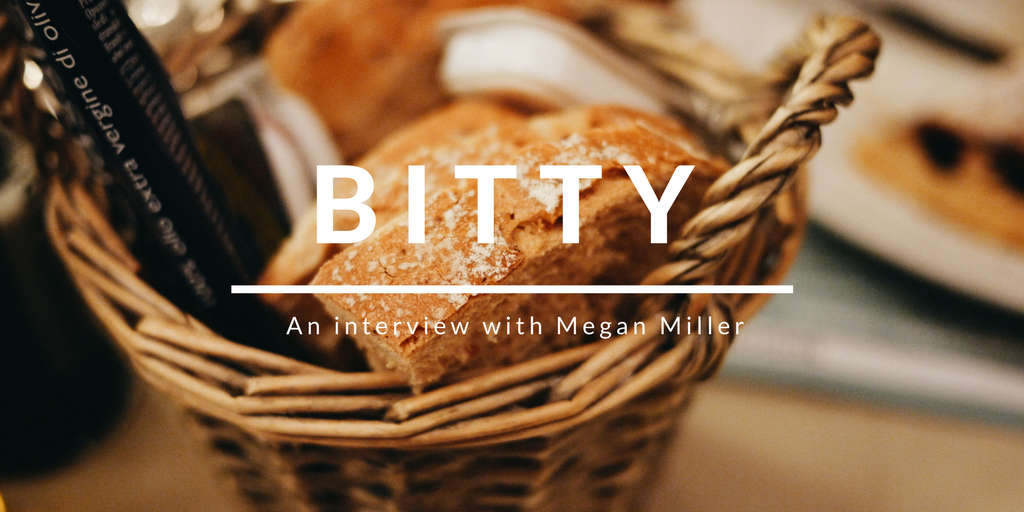 How did the company form?

Back in 2013, I was traveling around Southeast Asia and I had the opportunity to try a bunch of edible insects as street food in places like Thailand and Cambodia. I just got super interested in the idea that insects are considered everyday foods in those countries but they are unfamiliar to our culture.

After conducting research, I got really inspired by how eco-friendly and full of nutrition insects actually are. So I came home and asked my friends what they thought about eating bugs, and they told me I’d have to put my money where my mouth was.

So my good friend and I did some experimenting in my kitchen, making our own homemade version of cricket flour. I was the weird person who would take cricket muffins into my office. And then the UN came out with this report about how edible insects could be the key to food security and I decided that our bizarre little hobby could actually be a really smart business op-portunity. And we formed Bitty.

What is the problem that you’re trying to address?

Well, one of the big challenges of the next century is going to be access to food as the world population grows. There’s a supply and demand problem. As globalization spreads around the world, more and more people are becoming middle-class and everybody wants their comforts, and there’s just going to be a moment when the price of meat soars because we’re not going to be able to make enough meat to satisfy the demand.

We’re going to have to supplement our everyday diets with other forms of protein, from plants or insects. There are a lot of startups in Silicon Valley who are working on coming up with protein alternatives. A lot of them are stem-cell based meat solutions. But we think that the solution could be harnessing the existing biomass of protein that’s already on the Earth in the form of insects and using the protein as an ingredient in all sorts of familiar food products. 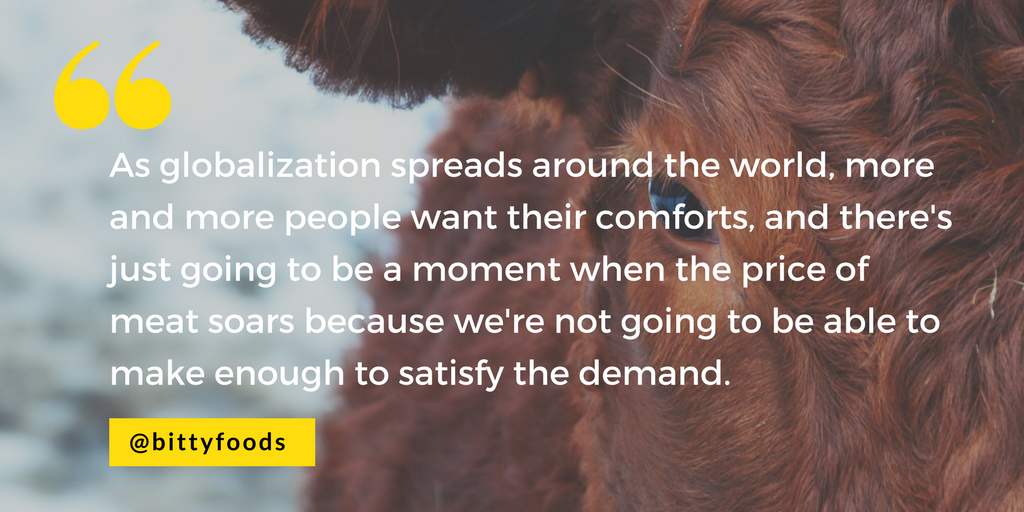 Can you tell me about your business model?

So we make an ingredient. We have a patent-pending flour that we sell wholesale to bakeries and other companies that want to make things with cricket flour in them. So we can do co-branded products and things like that. But we’re just creating a familiar brand that we want people to coalesce around as the trusted, beautiful brand that brings edible insects to the mainstream. So we have made our cricket-based foods and straight-up placed them in the traditional grocery distribution channels.

So what are the greatest challenges that you’re facing right now?

We just have a marketing and a branding challenge. I think what we have to do is educate people and raise consumer awareness. We want to make people familiar with the idea that this is a superfood, and there’s nothing scary about it. People are kind of turning to that idea much faster than we thought. Eighty percent of the world already eats insects and it’s familiar to them, but the countries that sort of drive culture around the world, the North American and European countries, are the ones that need to get on board with edible insects. It’s a really fun marketing and branding challenge.

What was one of your biggest triumphs to date?

One of the most interesting things that happened back at the beginning was that before we even had a product, we had just formed the company, but I had the opportunity to throw my hat in the ring at TEDxManhattan in 2014.

Edible insects may be the protein source that provides the food security we need to survive. Tweet This Quote

That ended up being a huge coup for us, because they let me speak and I got to serve our cookies at the lunch break. I basically just cranked out 700 cookies in my kitchen and served them to the guests, and everyone loved them. Writers from Vogue Magazine, Elle Magazine, and The New York Times were at the conference, and they all covered us. And then we got tons and tons of inbound interest, emails from people and stores saying that they wanted to buy the products. So we basically threw up a website really quickly and let people pre-order, even though there were no products yet, there was no kitchen even, and then we scurried to put together a team of bakers and a commercial kitchen and get all of our food certifications.

Three months later, we shipped all those orders out — close to 5,000 orders. So basically we had revenue before we had product, and I think that’s just an amazing signal for the fact that this is going to take off. 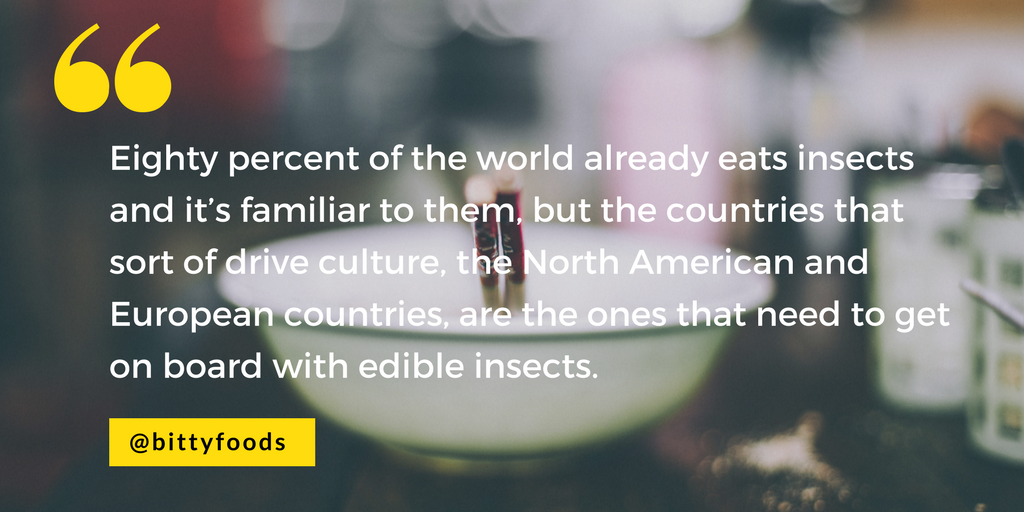 What do you want the world to look like as a result of Bitty Foods?

I want for there to be equal access to nutrition.

I’ll tell you what I don’t want the world to look like. I don’t want it to look like Snowpiercer. There was a science fiction film that came out a couple of years ago where basically, the world’s a mess and there’s a train that’s traveling around the surface of the Earth. All the people on the front of the train are really rich and they have these huge, beautiful feasts, and the people on the back of the train are poor and they have to survive on this bug mush. And you know, insects can be delicious, but it’s just like wheat flour: You can easily make something that’s not delicious out of wheat flour, because it’s a neutral ingredient.

We want to make people familiar with the idea that this is a superfood, and there’s nothing scary about it. Tweet This Quote

So what I don’t want is to create a division where rich people eat delightful meat and poor people are scraping the bottom of the barrel and don’t have access to healthy food. And we already have that in a lot of parts of the world, but I think if we’re able to elevate the status of edible insects to a superfood, then it becomes something that’s a part of everyone’s diet and it takes away the stigma. It makes it possible for delicious foods to be made and for people to have fairly equal access to protein. And hopefully, it will make it so that people don’t have to go hungry in the future.

And what happens if you fail?

My company may or may not be a success, but even if Bitty fails, I’ll feel really good about the fact that we’ve helped drive attention and bring momentum to this cultural movement. I feel like we’ve already made an impact. We’ve already gotten a ton of press, we’ve already done a ton of speaking and educated a lot of people about this. I hope Bitty becomes a big success, but even if it doesn’t, I feel like I’ve done some good work toward moving this whole thing forward. It’s going to continue to happen whether or not we’re a part of it. 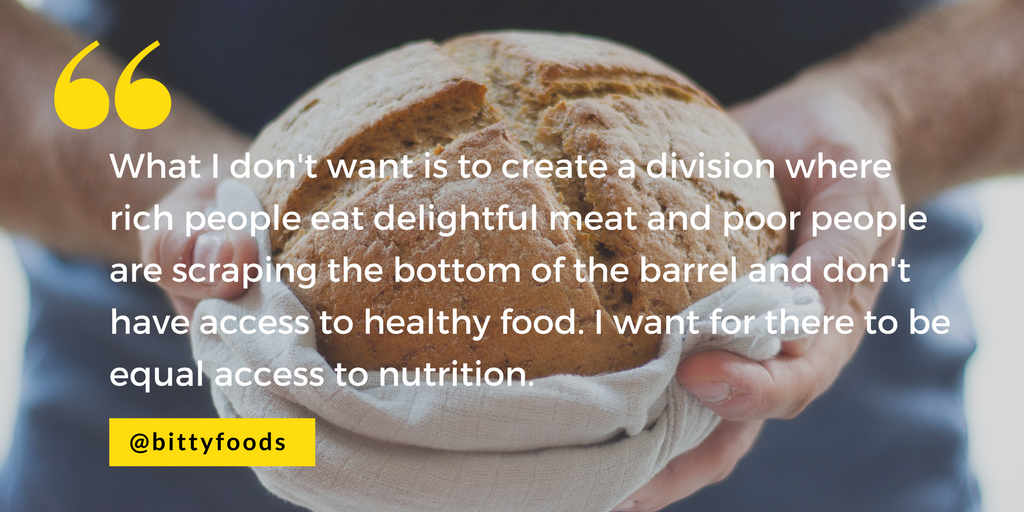 What’s next for Bitty and what are you the most excited about for the future?

We are in heavy sales mode. When I started this company, I had this vision of people all over the world happily eating products that have insects in them and thinking it’s normal, but I didn’t have a clear understanding of how to get from point A to point B because I didn’t come from the food business. So of course, we’ve hired that kind of talent and the people who could advise me on what to do. We have to sell now. So that’s what we’re doing. And it’s not my favorite part, but it is exciting single every time.

How is your business creating jobs?

We’re creating an entirely new industry. And it’s not just my company. I attended the first gathering of the North American Edible Insect Coalition in Detroit, and we’re forming an industry association — there are companies, academics, farmers, and packaged goods manufacturers all involved. It’s really exciting. So there will be jobs all across the value chain that are created and by being a leader in the industry, we’re directly creating jobs for our own supply chain and sales.

Do you regard other companies in this new industry as competition, or as allies?

It’s a trite truism that a rising tide lifts all ships, but in this case, it’s so new that as long as people are making foods that are tasty, I think we’re all in this together. I always say our only competition is foods that don’t taste good. Because we all want people’s first experience with cricket flour to be a delicious one. 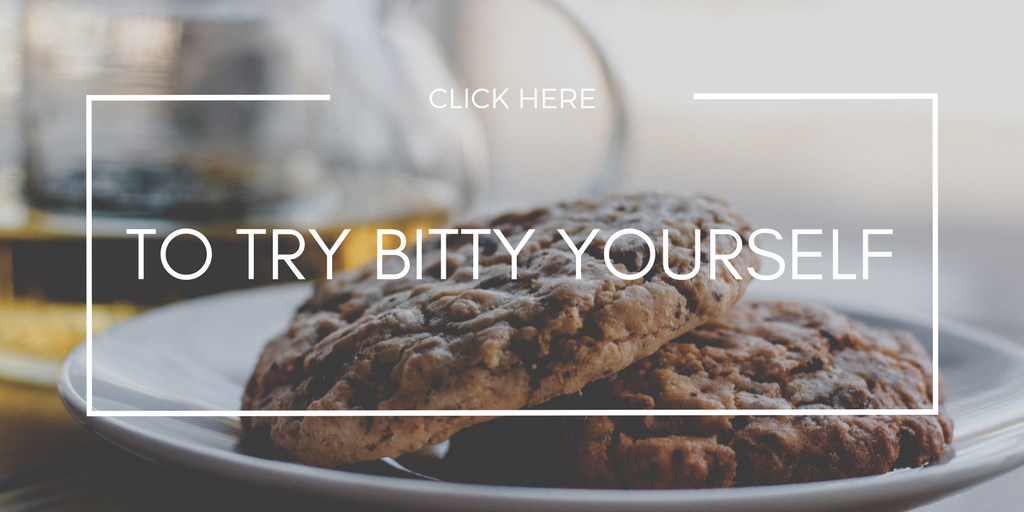 How These Black Swans Will Shape the Future of Energy

How These Black Swans Will Shape the Future of Energy