Why Cryptocurrencies Like Bitcoin Are More Valuable Than You Think

According to Business Dictionary, money is anything that serves as (1) generally accepted medium of financial exchange, (2) legal tender for repayment of debt, (3) standard of value, (4) unit of accounting measure, and (5) means to save or store purchasing power.

The rise of Bitcoin and other cryptocurrencies has forced us to rethink what money is and what it can be. I find it illuminating to go beyond the narrow functions of money listed above, and to consider as well the types of value which underpin money. By my estimation, there are three main sources of value driving a currency’s price:

We will explore all three, and in doing so, I’ll argue how “dollar for dollar” cryptocurrencies are more valuable than dollars.

Up until relatively recently, government-issued currencies (like the U.S. Dollar) were backed by a hard asset such as gold, meaning at any time you could redeem dollar bills for a predetermined amount of gold from the U.S. government. In order to issue more money, the government would have to place a corresponding amount of gold into the treasury in order to cover the redeemable obligations.

This arrangement begs the questions: where does the gold come from, and how does the government acquire more gold when it wants to issue new currency? The fundamental answer is of course, gold mining.

Taken together, the direct cost and opportunity cost of producing something makes up its total production value.

The rise of Bitcoin and other cryptocurrencies has forced us to rethink what money is and what it can be.

These days, governments do not bother backing their currency with a commodity like gold. Instead, they issue money by fiat and back it with the “full faith and credit” of the government itself. There’s no longer the ability to redeem your dollar bills for something tangible. And since it costs next to nothing to create more fiat currency, governments are perpetually tempted to either print more of it, or issue sovereign debt.

As a consequence, fiat currencies have very little production value. Furthermore, they are vulnerable to hyperinflation (like what happened in Brazil, Russia and 19 other countries over the last 25 years) or debt default (which has happened to just about every major monetary system at least once since 1800, including the United States).

Ironically, one of the main critiques of Bitcoin is there appears to be nothing tangible backing the currency. But in reality, Bitcoin is backed by its high production cost. Bitcoin is produced via a virtual “mining” process, which takes exponentially more computing power each time a new cache of Bitcoin is mined. Mining not only requires specialized hardware, but electricity to run and cool that hardware.

Estimates of just the electricity cost of Bitcoin mining range between $400 Million and $6.2 Billion per year. This as compared to the total Bitcoin market cap today of $17 Billion.

Critics argue that the energy spent on mining Bitcoin is arbitrary and wasteful. But this is precisely what makes Bitcoin secure and immune from hackers and governments alike.

The arbitrary-and-wasteful argument also lacks an understanding of opportunity cost. Imagine what all that energy and specialized hardware could be used for instead? With the rise of artificial intelligence and big data, there are surely very lucrative ways to deploy all that computing power besides cryptocurrency mining.

Mapping genomes, predicting the weather, and realtime translation of Mandarin to English jump to mind as all being higher value than Bitcoin mining, and yet Bitcoin mining is what the market demands. In my mind, this is a reflection of Bitcoin’s exponentially increasing production value.

As basic economic theory tells us, the financial value of anything is reflected in its fair market price, which in turn is a reflection of both the supply and demand. The demand for a currency is fueled by its utility, which we will address in a moment. Assuming a certain amount of demand, the price — and thus the value — of a currency is determined by its supply. Put another way, the more scarce a currency is, the more valuable it is (all else being equal).

As discussed, with fiat money, there is unlimited supply; the government can simply issue new currency by fiat. Even in the case of a gold standard, the supply is effectively unlimited. To wit: the Earth holds a finite supply of gold, but if the price of gold were high enough on the open market, it would be worth the cost to mine asteroids for gold or transmute gold from other elements.

And here’s where Bitcoin gets interesting.

Bitcoin (and most other cryptocurrencies) are designed to have a fixed supply. Once 21 million Bitcoins have been mined, there will be no more to mine. Thus, Bitcoins, being purely mathematical abstractions, are amongst the most scarce commodities in the known universe. Which means that their scarcity value is much greater than gold, silver, or any physical commodity.

As of this writing, about 75 percent of all Bitcoins have been mined — the last one is projected to be mined around the year 2045. This is why some futurists predict that (a) cryptocurrency will eventually replace gold; (b) replace the U.S. Dollar as the world’s reserve currency; and (c) the price per Bitcoin will eventually increase over a thousandfold to reach $1 Million per coin.

While I have doubts about the longevity of Bitcoin itself, I do believe cryptocurrencies as a class will surpass fiat currencies in the long run. And I believe this because of their relative scarcity, combined with their superior production value and utility.

By the old world definition of money, Bitcoin fails on the “legal tender” aspect, but over time it has become increasingly useful in the other aspects. However, fiat money and Bitcoin both have limited utility, when we compare them to the growing universe of alternative cryptocurrencies.

If you are like most people, you probably aren’t aware of the “Cambrian explosion” of new cryptocurrencies over the last several years, so here’s a sampling: 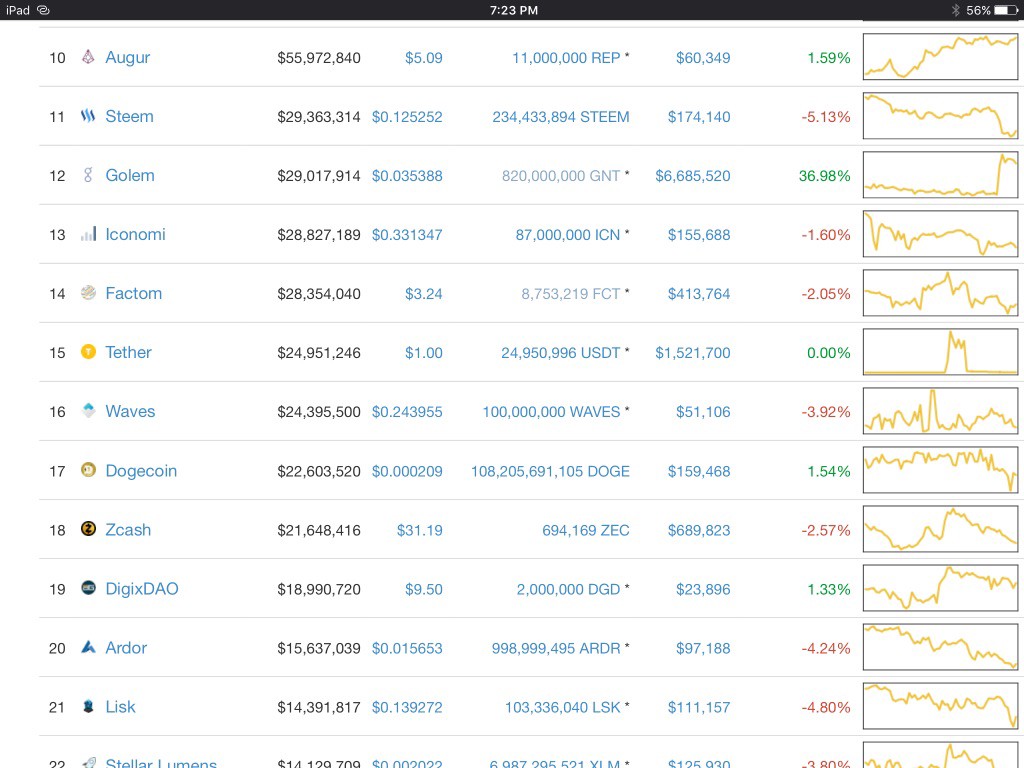 From http://coinmarketcap.com/ where there are over 700 listed cryptocurrencies as of this writing.

What you are looking at is the rise of the blockchain token and the decentralized business model (sometimes called “app coins”). Instead of yearning to create the next unicorn startup, the best and the brightest software developers are creating cryptocurrencies, which are backed by the applications that in the past would have been created by a startup.

The naive view of these app coins is that they are simply the same old Silicon Valley startups working on blockchain technology. The reality is a much more profound shift, and one that ultimately threatens the nature of the corporate firm.

Consider Golem, which works like “AirBnB for your spare computing cycles,” and which backs its currency with a globally distributed supercomputer. If the coin takes off and becomes one of the dominant cryptocurrencies, it could transform the way the internet works, taking the power out of large corporations like Google and AT&T, and putting it into the (literal) hands of the people, via their smartphones and laptop computers.

Or take Steem, which is a decentralized version of Reddit. Instead of Facebook getting paid for selling advertising over your content, you are getting paid, in cryptocurrency, each time someone reads or likes your post. The more people who write and read on Steem, the more valuable its network becomes, and the higher the price Steem cryptocurrency commands on the open market.

With a corporation, there’s a distinction between an executive, employee, investor, director, customer, supplier, contractor, and strategic partner. With a cryptocurrency, there is no distinction between any of these stakeholders. Anyone can play any role (or multiple roles) at any time. What’s even more of a mind boggler is that nobody is in control; these are hive minds, serving one or more extremely useful functions. Useful to whom? The stakeholder network, which is simultaneously creating the currency and benefiting from using it.

Money is a 5,000 year old, virtually unchanged technology. If money is a horse-drawn carriage, cryptocurrencies are Air Force One.

Think about that for a moment. What if every company you interact with in the future — including your “employer” — were not a corporation, but rather a distributed blockchain network? Imagine if you could earn a living being a sovereign individual, plying your skills and passions in a fluid and value-producing manner of your own choosing.

Whether this is your definition of a good life or not, this is becoming increasingly possible, and to some, as inevitable as the internet itself. Why? Because cryptocurrencies have high utility value to a large number of people who view such alternative as an improvement over the current state of affairs (see here and here for a flavor).

But it’s not just the digital elite who are starting to participate. There are coins for the cannabis industry, a coin that rewards students for learning, a coins that represents labor hours for temp workers, coins for gamers, one that grants universal basic income, one dedicated to the memory of Steve Jobs, a coin to support President Trump, another to impeach him, and one called bunnycoin, “designed to spread Love, Peace, Happiness and Economic Freedom Worldwide.” They all have real economic value and are trading freely on unregulated open markets, and ultimately are beyond the control of any government or other institution (just like the internet itself).

Centralized fiat money can’t do any of this. It’s laughable to even compare money to cryptocurrency. Money is a 5,000 year old, virtually unchanged technology. If money is a horse-drawn carriage, cryptocurrencies are Air Force One.

The naive view is of cryptocurrency suggests it’s a hybrid between money you can spend, and startup equity that happens to be fully liquid and tradable. Those on the inside see cryptocurrencies as prions, infecting and transmuting corporate structure into distributed networks.

Ever wonder what a world without corporations or without central government might look like? This is what Bitcoin, cryptocurrencies, and the blockchain are all about. This is why they are so valuable.