Energizing the Green Revolution in Africa

In the summer of 2005, Andrew Youn, an M.B.A. student at Northwestern University’s Kellogg School of Management, was traveling in western Kenya when he met two women, farmers who were living profoundly different lives.

Both were working small plots of land, but one was producing a yield of two tons of maize per acre — better than Kenya’s national average — while the other was producing one quarter that amount. The difference meant the world. One family had enough to eat during the “hunger season” — the months before the late-summer harvest. The other didn’t. One family had decent housing and clothing and the children were healthy. The second family was living a meager existence, Youn recalled. “She had lost a child and it was unlikely that her four remaining children would be able to complete high school.”

Among the billion people today who are living in extreme poverty—subsisting on less than $1.25 a day—one-fourth are smallholder farmers in Africa. Tweet This Quote

The difference? One woman was doing what many farmers around the world had been doing since the Green Revolution began in the 1960s — using improved hybrid crop varieties and fertilizer and incorporating planting techniques proven to boost food production. As Tina Rosenberg has reported, the Green Revolution transformed agricultural practices across Asia and Latin America — doubling world food production from 1960 to 1990 and saving countless lives — but, for a variety of reasons, it has not yet taken hold across Africa. Among the billion people today who are living in extreme poverty — subsisting on less than $1.25 a day — one-fourth are smallholder farmers in Africa.

“In the fight against global poverty, there are very few hugely powerful leverage points,” says Youn. “The majority of the world’s poor people are farmers; they share one profession, and we figured out how to make that profession way more productive 50 years ago. There is a common solution that could substantially improve their productivity.”

The African Green Revolution is emerging Tweet This Quote

Since his visit to Kenya, Youn has been obsessed with making that solution widely available in Africa. In 2006, he co-founded a nonprofit organization, One Acre Fund, with offices around East Africa, to assist smallholder farmers; today, the organization has a staff of 2,500 who deliver farming inputs, training and market assistance to 280,000 families in rural Kenya, Rwanda, Burundi and Tanzania, with a plan to be serving a million families by 2020.

This work is part of a historic shift. “The African Green Revolution is emerging,” said Pedro Sanchez, director of the Agriculture and Food Security Center at Columbia University’s Earth Institute. “In the last 10 years, yields of cereal grains like maize have increased by about 50 percent from 1 to 1.5 tons per hectare, but they’re still pretty miserable.” (In Asia and Latin America, yields are 3 tons per hectare.) “But it will happen,” Sanchez adds. “Many African countries are serious about this. The main barrier has been access to improved varieties of crops and fertilizers.” 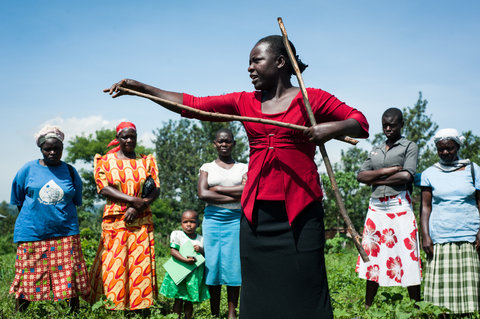 One Acre Fund field officer Caroline Atieno demonstrates how farmers can use a stick to space rows for planting in Kakamega, Kenya.Credit Hailey Tucker

Sanchez points to promising signs, including the spread across Africa of companies that specialize in improving seed varieties, joint efforts by governments and fertilizer manufacturers to reduce costs, fertilizer subsidies (notably in Malawi) and government loan programs, and the emergence of agro-dealers, mom-and-pop shops that sell agricultural supplies. “We have helped set up 25,000 agro-dealerships in 13 countries,” said Agnes Kalibata, a former minister of agriculture and animal resources for Rwanda who is now president of the Alliance for a Green Revolution in Africa, or AGRA. “We need to create a value proposition around smallholder farmers for the private sector and the area that needs to be strengthened is the last mile solution. We need institutions like the One Acre Fund to reach farmers.”

In Africa, agriculture is different from what you’d find in Asia. Most farmers are women, who face greater barriers than men in accessing land, finance and technology. Africa’s soils are more degraded, requiring more careful management. Africa’s population, already suffering from high malnutrition, is expected to double by 2050. African farmers will need greater access to drought-tolerant crops to contend with climate changes. And, of course, we know far more today than in the 1960s about the environmental costs of intensive farming with nonorganic chemicals.

In theory, as smallholder farmers increase productivity, demand for quality farm inputs should increase and markets should emerge to serve the need. One Acre Fund reports that the families it served in 2014 experienced average income gains for the activities it supports ranging from 25 to 99 percent. In Kenya, the gain translated to an additional $170 per year, which families typically used to pay school fees, buy food and make new business investments. In 2013, One Acre Fund began a major effort to overhaul its monitoring work so it would have a clear understanding of its impact.

This is important because business people need solid data to justify investments in new markets, and policy makers and philanthropists need to know what works to alleviate hunger. It’s also important to have organizations like One Acre Fund that work to develop new markets before they are widely seen as viable. They help figure out the delivery systems, show how to aggregate small-scale producers, and demonstrate demand. In the field of microfinance, social-purpose organizations like the Grameen Bank and Accion International spent decades demonstrating the viability of banking with the poor; they worked with foundations, governments, nongovernmental organizations and businesses that now provide access to credit to 200 million people.

Groups like One Acre Fund play a similar role today. The organization is particularly well designed to partner with private and public sector organizations to stimulate an African Green Revolution friendly to smallholder farmers.

“They’re solving a really hard problem,” said Marshall Burke, an assistant professor in the Department of Earth System Science at Stanford University. “There are millions of smallholder farmers spread out across Africa, with very poor infrastructure in areas where markets don’t function very well, and they’re providing them with timely and regular access to high quality inputs.”

In addition to distributing inputs, One Acre Fund provides credit to purchase them, along with bi-weekly trainings, so that farmers can learn how to maximize their productivity. “The question of how to use the right fertilizer and apply it in the right amounts and at the right times is very important,” said Sanchez. “Many small farmers used to use fertilizer 20 or 30 years ago before the Washington Consensus in the 1980s took away subsidies. Farmers have forgotten that.”

One Acre Fund systematically tries to assess its own effectiveness. “I think one of their defining features is they’re very scientifically inclined,” said Christopher Barrett, a professor of applied economics and agriculture at Cornell University. “It’s incredibly complicated to determine which of the 15 to 20 things is most immediately restrictive” to farmers, he said. “The only way to find that out is to continuously talk with them and to continuously evaluate the work as you go on.”

Continuous experimentation leads to important insights. For instance, the One Acre Fund promotes “micro-dosing” of fertilizer. It turns out it’s helpful to provide farmers with something as simple as a customized scoop to help them deliver the right amount to supply nutrients while minimizing the risks of soil or environmental degradation.

Similarly, the organization finds it crucial to regularly remind farmers about the importance of weeding, plant spacing, composting, crop rotation and proper drying. “It’s not always obvious why you get good harvests,” said Youn. “There’s a lot of boring details that we have a passion for.”

Much of the work is about reducing risk. One Acre Fund sells food-safe insecticide dust and sealed bags to reduce spoilage, solar lamps to reduce the need to burn kerosene (a major health hazard) and crop insurance against excess rain or drought. “We are now the largest retailer of crop insurance to smallholder farmers in Africa,” said Youn. “We work with farmers across enough rainfall zones that we have payouts every year.”

All of the work hinges on quality training. One Acre Fund field officers are usually farmers themselves, and are each responsible for training 200 others. Meetings are held at the farms of volunteer group leaders. “The most important thing in a training is that each and every person participates,” said Oliver Simiyu, One Acre Fund’s field director for the Kimilili district, in western Kenya. He oversees services to 7,200 farmers. “When I was a field officer, I was only to be contributing 20 percent of the content of the training,” he said. “The rest should be feedback, role play, giving kudos to those who have done well, sharing ideas for upward feedback, quizzing for understanding, so we know where to repeat or not.”

A lot of the staff members’ commitment to the work appears to stem from their own experiences. Pauline Wanjala, a senior field director who oversees One Acre Fund’s work serving 18,000 farmers in the Lugari and Kimilili districts in western Kenya, said: “I used to farm maize on half an acre of land and the most I could get was three bags. After my first season, I harvested 12 bags.” (Each bag could hold 90 kilograms). She used the profits to expand her house from two to six rooms. She now supports her three children, as well as two brothers and her mother. “If it were not for One Acre Fund, my children might not be in school,” she said.

“These farmers are not like U.S. farmers,” said Barrett, from Cornell. “Their own health and the health of their families is closely bound up with their agricultural production.”

Low productivity creates a trap. It’s during the seasons of greatest rainfall that people need to work hardest on their farms, noted Barrett. But that’s also when diseases spike and people are insufficiently nourished. Without a surplus, farmers and their families are highly vulnerable. A one-time health shock can send a family cascading into deep poverty, as Anirudh Krishna illustrates in his book, “One Illness Away.”

Another problem farmers face is selling low and buying high. When farmers are strapped for cash, they often have to sell their crops immediately after harvest, when prices are lowest, and buy food later in the year when prices have risen. Marshall Burke, from Stanford, is experimenting with assistance from the One Acre Fund to establish whether well-timed microloans can help smallholder farmers increase profits by letting them sell at more favorable times. During the first year, the loans produced a 20 percent return on investment, said Burke, and preliminary second-year results appear even more promising. If this project proves profitable for farmers, One Acre Fund is in a position to rapidly scale it up.

“We have this amazing fact where most of the world’s poor people are farmers and they have this basic food production system in their back yard,” said Youn. “The agricultural innovations were invented decades ago. What we need is to distribute them in a form that is useful to people. Right now, the biggest challenge for us is how insignificant our scale is. Fifty million farm families in Africa could benefit.”

The Pre-money vs. Post-money Confusion With Convertible Notes

The Pre-money vs. Post-money Confusion With Convertible Notes

David is co-founder of the Solutions Journalism Network and writes a column for the New York Times called Fixes with Tina Rosenberg. He is the author of "How to Change the World," and “The Price of a Dream: The Story of the Grameen Bank,” and is co-author of “Social Entrepreneurship: What Everyone Needs to Know.”