The results paint the picture of a well-rounded, flexible professional who takes a holistic view of development work. Just as likely to be a venture capitalist or high-tech whiz as your traditional aid worker, the future development professional will need to be agile, collaborative and constantly learning new skills.

A few elements of the report particularly stood out for me. For a start, the fact that only 10% of respondents felt that disrupters would play any significant role by 2025. Perhaps today’s emphasis on disruption is a passing trend, or we’re just overestimating its significance? Or perhaps development professionals are blind to what’s going on out in the real world, and they choose to not recognise it?

Is today’s emphasis on disruption a passing trend? Are we overestimating its significance? Tweet This Quote 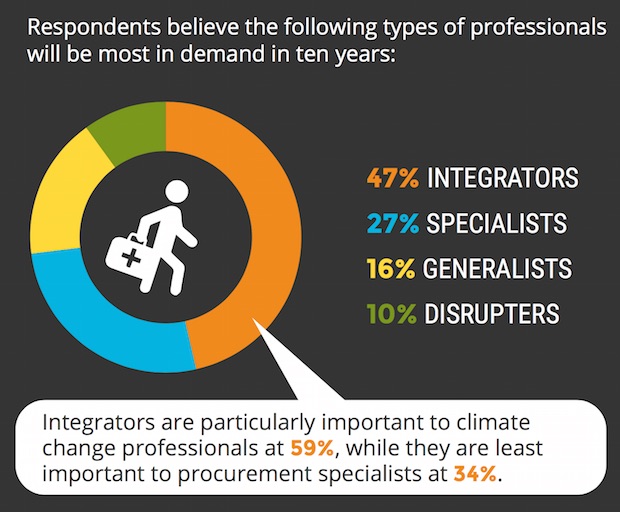 There was some recognition, though, that the traditional top-down approach would decline, although I’m not quite sure how the target communities will be able to meaningfully engage in the debate that replaces it. I guess the survey respondents assume that by 2025 we’ll have finally nailed those tricky little feedback loops. 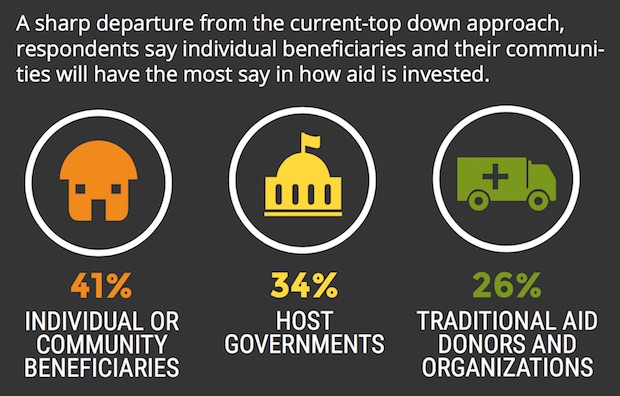 We’re already seeing a blurring of boundaries between aid and business. Tweet This Quote

It was also interesting to see where the respondents felt most of the ‘development professionals of the future’ were going to come from. We’re already seeing a blurring of boundaries between aid and business (i.e. Facebook and Google’s approach to last mile connectivity issues), and perhaps that trend will continue. If this forecast does turn out to be true, I would argue that they shouldn’t be called ‘development professionals’ (in the same way we don’t call Facebook and Google’s work in Africa today aid or development).

Last but certainly not least, this was one of the most revealing slides for me. Lack of empathy is already a huge problem as people bypass time in the field and opt to develop solutions far away from the problems without speaking to anyone. It’s great to see empathy on the list, but it should be higher. After all, none of the other skills matter if you don’t understand the people you’re trying to help, surely?

So, what was missing? Well, I would have loved to see a breakdown of responses from aid workers in the developing world vs. aid workers from the developed world. I’m sure some of the attitudes would have been quite conflicting and, in turn, revealing. I’d also love to see a similar survey carried out among aid recipients – their thoughts, concerns and hopes for the sector – something that will be increasingly important if they do, quite rightly, begin to have more say in how ‘their’ aid is spent and administered.

This first appeared on Ken’s blog. You can download your own copy of the survey findings here.

Blowing Up A Dam (Is A Lesson In Entrepreneurship)

Blowing Up A Dam (Is A Lesson In Entrepreneurship)