“On 29th August 1965, an article was published in The Observer entitled ‘How to help them help themselves,’ written by Fritz Schumacher the distinguished economist with support from his close friend Observer editor, David Astor. In it, Schumacher pointed out the inadequacies of aid based on the transfer of large scale, capital-intensive technologies and argued for a shift towards “intermediate technologies”, based on the needs and skills possessed by poor people themselves. This article helped shape the future of development.”—Simon Trace, CEO, Practical Action

I came across Schumacher’s writing almost 20 years ago during my time at Sussex University. I was only three years into my global development journey, having spent a decade working in the technology sector until everything changed after a trip to Zambia in 1993. Shumacher’s call for appropriate technologies resonated on so many levels, and seemed to sit in stark contrast to many of the active—and failed—policies of the development system.

My sense has always been that we need to support the people closest to the problem. Tweet This Quote

Sadly, despite the rhetoric, little has really changed, and many ICT4D projects simply follow big brother’s bad practice. This is why, for the best part of the last 13 years, I’ve been relentlessly focused on development ‘outside the system’, and how we might support the grassroots response to many of the problems out there. In 2005, FrontlineSMS was specifically built with this—and Shumacher’s vision—in mind.

My sense has always been that we need to support the people closest to the problem. Not only do they often have a better understanding, but they also get the local context (cultural, geographic, economic and so on). As outsiders, we often do not.

As Ahmed Djoghlaf pointed out during the current climate talks, “It’s difficult for someone living up on the 38th floor to know what is going on in the basement.” The same applies in global development, where many of the organisations that drive the agenda are based far away from the problems they’re trying to solve.

Until local actors drive more of the development agenda, there will inevitably be a disconnect; whenever there’s a disconnect, there should be caution. Tweet This Quote

Until local actors drive more of the development agenda, there will inevitably be a disconnect. And whenever there’s a disconnect, there should be caution. We may have the money, and what we believe to be the better technology and expertise, but history tells us that we often struggle to apply them in ways that result in meaningful change, or any change at all. 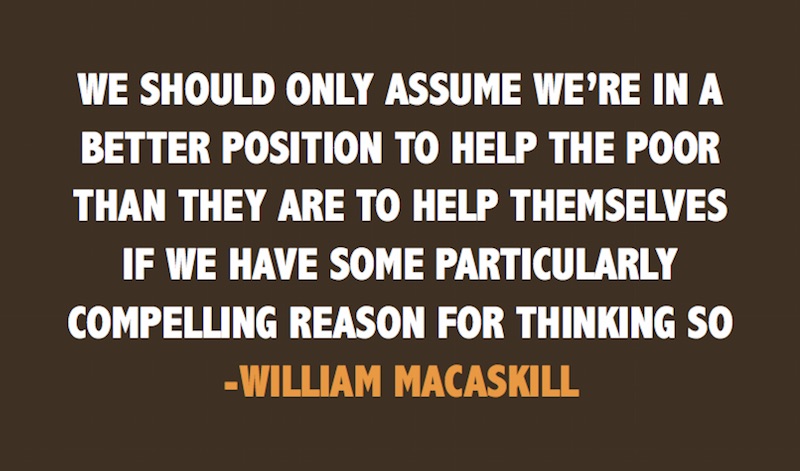 This quote from William Macaskill’s new book, Doing Good Better, should be printed off and pinned on the wall of every development agency working overseas. It should be the starting point, and opening question, to anything and everything we do.

It’s time to vacate those offices on the 38th floor and move our thinking a little closer to the basement. We still might not get everything right, but it’s almost certainly a better starting point. Just ask Schumacher. He’s been saying it for 50 years.

This post originally appeared on Ken’s blog. For more on how Schumacher’s work has influenced Ken’s, check out this article and interview in World Watch Magazine from 2010.