ver 625 million people live without power in Sub-Saharan Africa. That’s nearly 70 percent of the continent’s population. For those households with access to the grid, only 69 percent experience reliable electricity. Blackouts last for days, often impeding businesses from providing a dependable service or generating a consistent income.

With electricity and economic growth so strongly correlated, the ability to rely on power is a fundamental first step toward ending poverty.

Off Grid Electric is the world’s first distributed clean energy utility, providing affordable, solar energy to households that struggle with spotty or nonexistent grid access. They sell solar energy systems on a pay-as-you-go, lease-to-own model – costing some homes as little as $7 a month. That way, customers don’t have to worry about making a daunting financial investment upfront.

Unreasonable sat down with Off Grid Electric CEO, Xavier Helgesen, to discuss a trip to Malawi, the moral calling of our time, and work worth doing. 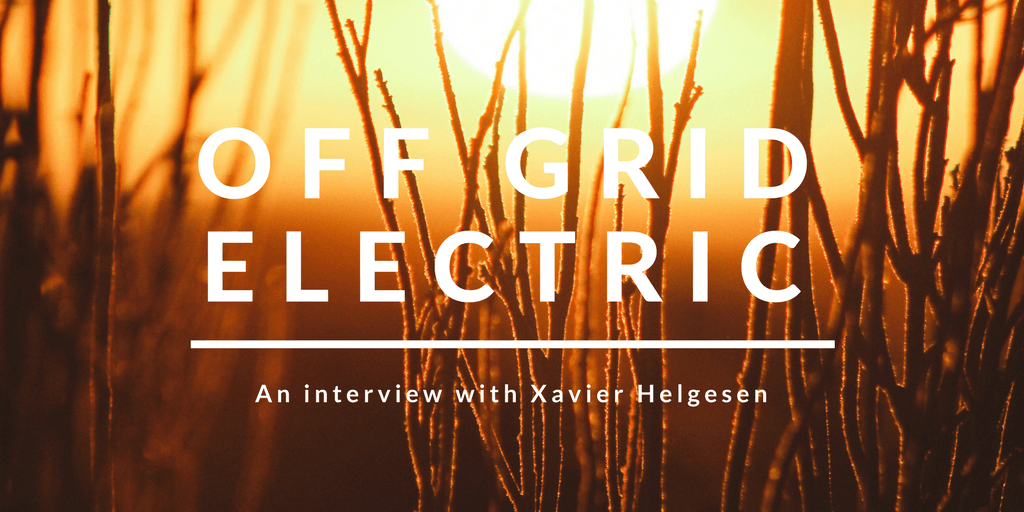 So, you have started four companies with over a million in revenue each. What made you feel like that was possible?

I think I did learn a good work ethic young, which I will thank my parents for actually. They did a good job of noticing my motivations and aligning them. So before I was mowing lawns, they paid me to paint our garage. They were paying me to polish our cupboards. They didn’t have to pay me much, and I’d be like, I’m on it.

Well, I’ve always been really interested in politics, and I’ve always been a big justice junkie. So stuff like the drug war struck me as deeply unjust back when I was a teenager. I just thought it was unjust that people were locked up for recreational drugs. So I would subscribe to these mailing lists, and my parents must have thought it was weird. So then in college, I was the progressive at a generally conservative school. And I’d started this website in college that became very popular on my campus. I would use that as kind of a progressive mouthpiece in a sense.

Then, I actually read Hunter Lovins’s book Natural Capitalism as a junior or senior in college, which was a huge eye-opener for me. I read that, and then I had this idea that whatever I do in life, I want it to be socially aligned and I want it to be business.

When you did come across energy, what about that problem made you dive into it?

Well, I thought it was this amazing thing. It was two elements. One was the impact side. It was like the impact triple crown. If you solve this problem, it leads to massive environmental benefits because you have a billion or so people who don’t get carbon intensive energy as their primary source of power. It’s a huge social benefit, too. Kids do way worse in school if they don’t have electric light, for example.

Also, it’s just basic stuff that lasts a lifetime, like not being able to study at night to getting sick from inhaling kerosene fumes. It was also clear that this would be a market. If people had a problem, they could pay to solve it, and there would be opportunities to create businesses. It was not easy, but you could do it. So I think I fell in love with the market first, and then I also felt like climate change was the moral calling of our time. So that was the one I looked at and was like, OK, this is how my generation is going to be measured. Not what did we talk about, not what papers did we write, but what did we do? 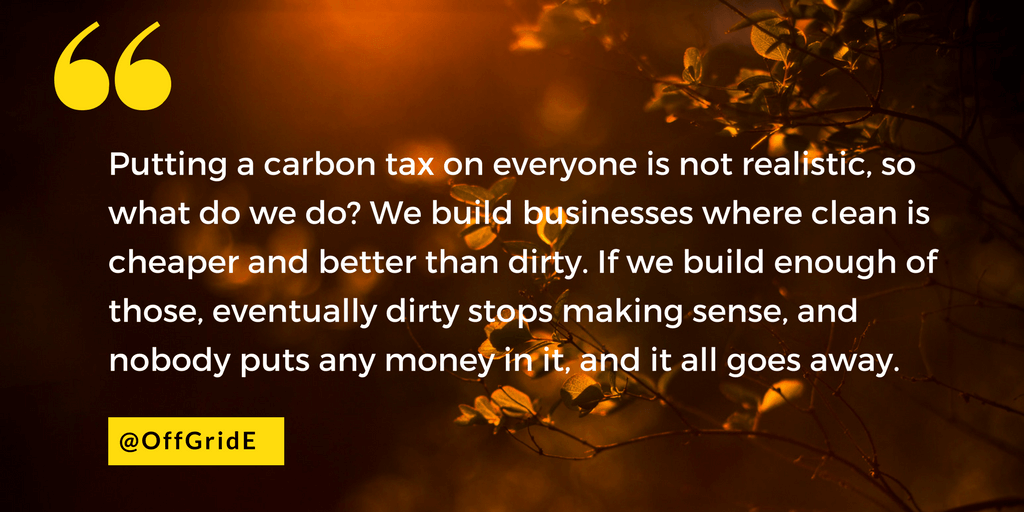 Putting a carbon tax on everyone is not realistic, so what do we do? We build businesses where clean is cheaper and better than dirty. If we build enough of those, eventually dirty stops making sense, and nobody puts any money in it, and it all goes away.

Did you have a personal experience where you encountered this problem?

I was really blessed to get to go to Africa a couple times. I went to this town that was on Lake Malawi, and I went scuba diving in the lake. And my guide was a really nice guy, so he invited me over for dinner at his house. This was a big town actually, and there was no electricity at all. It was completely off grid. So I just had this really surreal experience of being led by kerosene lamp through the streets of the town at night. The kerosene lamps lighted the entire experience, so I knew what that felt like and how crazy it was that this whole town was completely off the grid.

Once I learned about the more macro picture, I saw that this is normal. This isn’t a really poor town in Malawi. Then, I also was fascinated with solar, and I felt like solar would fundamentally change the world because it was such a different way of producing power, but that it would take time for it to be made relevant for consumers. 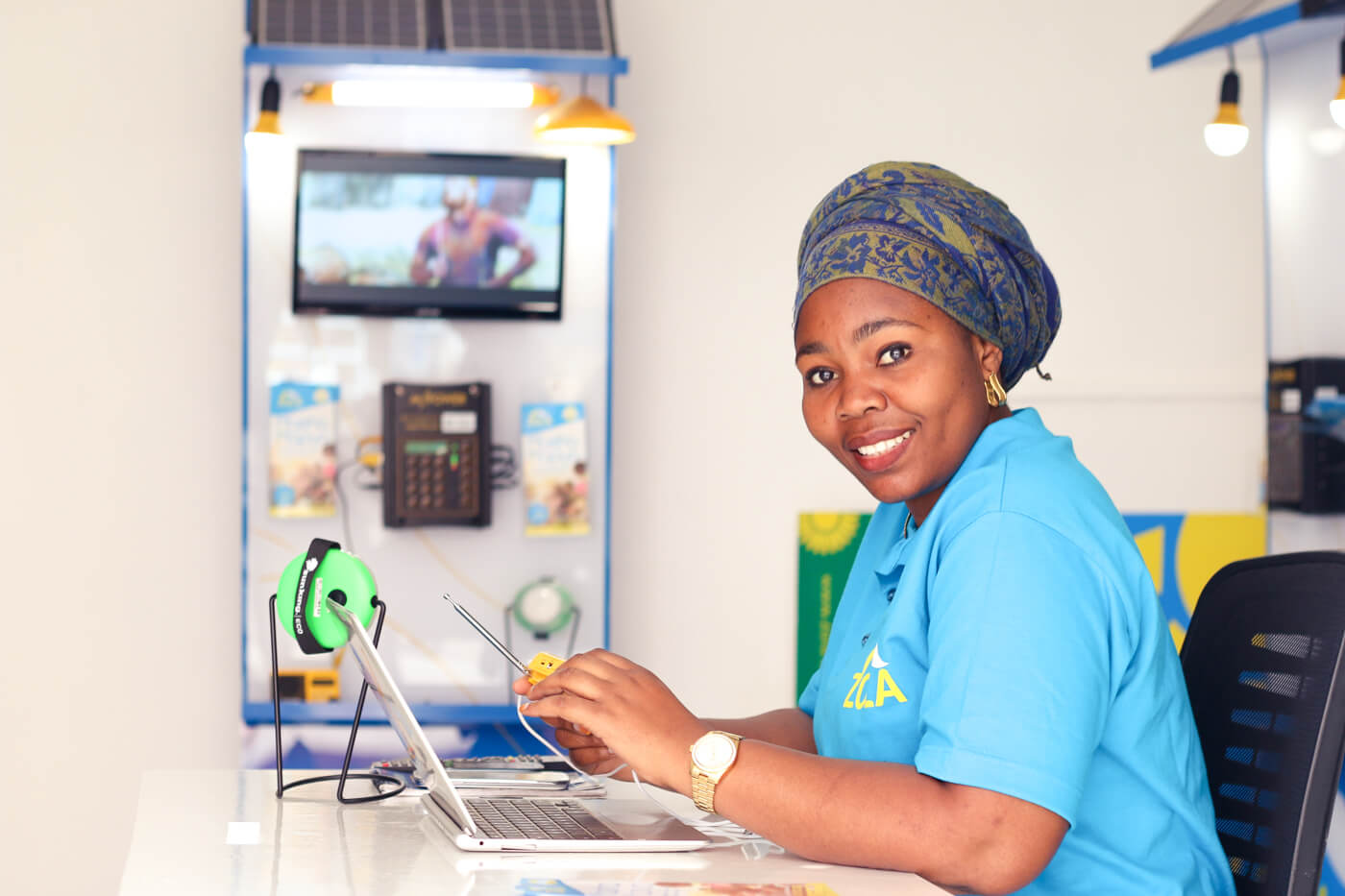 Photo provided by Off Grid Electric.

Was there a turning point where you decided you had to do this work and that Off Grid Electric had to exist?

I think it was something I went back and forth on during my year at Oxford because I knew how much pain it is to start something. It’s like knowing what’s ahead of you and knowing that you’re willingly putting yourself in that experience. You went through it already, and you have the scars from it, and of course you have a bunch of things that you would have done differently. In some ways, it’s cathartic to take this new company and say, “I’m going to do this and this and this that I didn’t do with my last company.”

Over 625 million people live without power in Sub-Saharan Africa. Tweet This Quote

I guess I just decided that this was an opportunity, like it was possible for me to do this at this point, and at the very least, it would be a tremendous opportunity to grow. And I felt like it was important. I felt like it was aligned. It’s one of those things that when you set your intention to something, then a few lucky things happen and you get on your path.

What makes Off Grid different or unique? Why does it need to exist?

We’re taking an extremely progressive view of where the technology is going and what the customers need. We’re basically building a business model assuming that solar panels will be more or less free. And a business model that says, we know that what our customers want is what every American and European has: power that just works all the time and powers whatever you want. We know that inherently there’s cost right off the bat with solar, and so the question is, how can we push that way further than a lot of people thought possible with as many applications of power as possible?

What does Off Grid’s success look like for your customers?

I think it’s a really fundamental human right at this point that people have electricity and connectivity. We have really no technical barrier to doing this. We have no economic barrier to doing this. Far more money is already been spent on electrification campaigns than would be necessary, even to subsidize the rural poor to get this.

But there are some folks that are a bit too poor to pay full price for this. I think if you get that fundamental level in place, then that’s a big step up in awareness. Now, people can have access to more information about the world. Presumably, that will make them better voters and better citizens, and I think that part’s important. 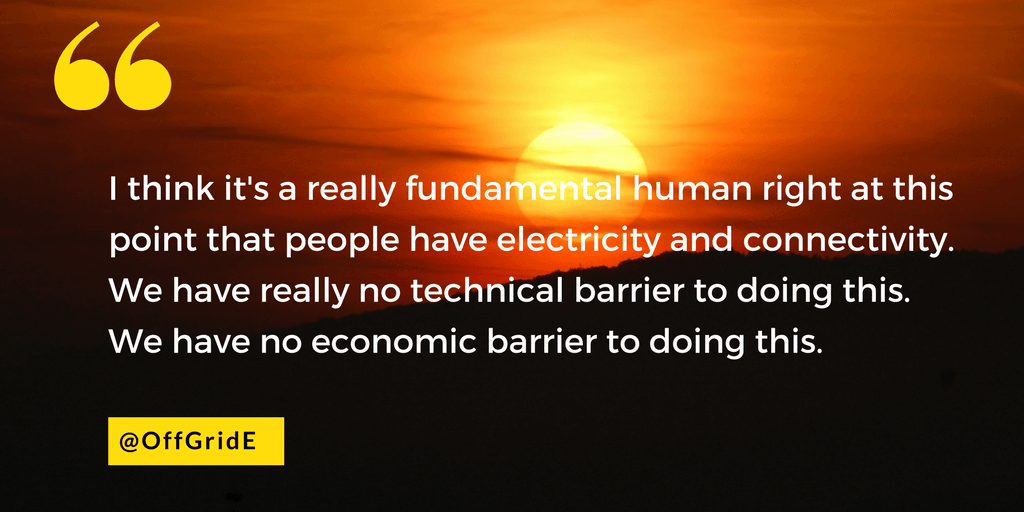 What are some of the major lessons you’ve learned?

So, one thing I learned is that big corporations are just made up of normal people, and those normal people generally want to help. Big corporations were very opaque to me before I started Off Grid, and building partnerships with these big companies and showing how we can help them with access to new markets or new business models has been a major learning for me. It’s been really cool to see the value of partnership and the value of mutual creation.

Our goal is not to supplement the grid; our goal is to be the primary power for Africa. Tweet This Quote

And then, even relatively big companies are run by a small cadre of smart, dedicated people who decide what happens. One of the cool things about a startup company is that if you really focus on it enough and you have at least some funding base, then you can get the caliber of people who could run a very, very big company in all of your key roles. In some ways, the sooner you do that, the better off you are. So we were probably two years too late to get real HR leadership for example, and that hurt us in a lot of ways. Because if you wait too long and try to skimp on things, which I think in some ways we’ve done that well, it actually comes back to bite you in a big way.

What do people get wrong about Off Grid Electric? Are there any misconceptions that you want to put right?

Some people in the world will look at what we’re doing and say, “Well, that’s a nice bridge until people get real electricity.” They don’t realize where this is going, and they don’t realize the cost curves and how quickly that’s going to flip. What we already provide today is a lot better than what a lot of people can get from their national grid, which is why we sell as many as we do, whether it’s that they already have power and it’s just unreliable, or that they don’t have any power and it would be expensive or prohibitively expensive to connect.

So I think that’s one thing that people don’t realize. Our goal is not to supplement the grid and only light the deep rural homes; our goal is to be the primary power for Africa, and that’s a much more ambitious goal.

Interested in working in clean energy? Companies in Unreasonable’s network are hiring!