How to Disrupt an Industry that Doesn’t Want Change: Q&A with Desalitech

While Coca Cola has made notable strides in its water management, most other large-scale manufacturers continue to rely on outdated purification technologies, making the industrial sector the world’s most egregious waster of water.

Nadav Efraty founded Desalitech to introduce a more reliable, more efficient method of water purification to an industry that has not questioned the efficacy of its own systems in nearly forty years. The company’s proprietary enhanced reverse osmosis technology is so effective that over the course of the lifespan of a single Desalitech unit, over 3.6 billion gallons of water can be saved.

This is no small change, considering that the impending projected increase in global population will not be met with an increase in water availability; in order to conserve the planet’s most precious resource, it will require action on the part of industrial manufacturers and individual consumers alike. 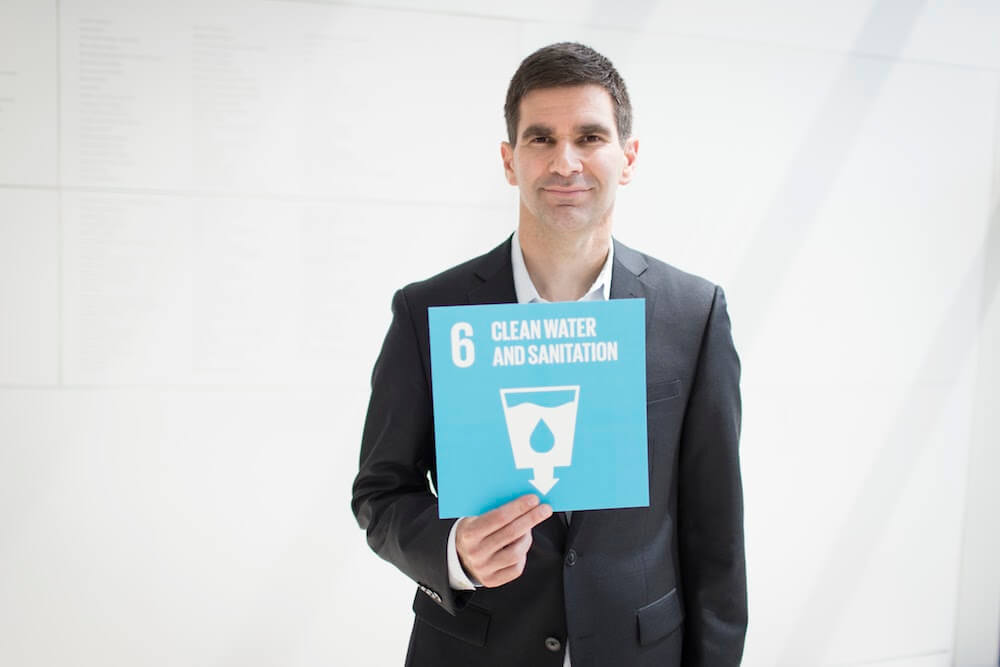 What does Desalitech exist to do?

NE: The world is wasting way too much water, and very surprisingly, the industrial sector is the biggest waster of all. Desalitech helps some of the biggest industrial companies in the States and all over the world save tremendous amounts of water and money and improve their operations.

Who are some of those industrial manufacturers?

NE: We work with some of the world’s biggest manufacturing corporates, be it Coca-Cola and their competitors, huge automotive companies, big utilities, or consumer goods giants like Procter and Gamble. The companies we work with basically manufacture all of the goods that we use in our every day lives.

How does Desalitech reduce water usage for these companies?

NE: They all rely on a technology called reverse osmosis to purify water, and despite this technology being very inefficient and unreliable, they have been using it for decades and decades.

We found a way to completely reengineer reverse osmosis and make it far more efficient, so it reduces water waste by about 85 percent. We also reduce energy waste by 35 percent, and we greatly reduce maintenance needs. All in all, we help those companies save about 50 percent of the water purification costs and grow a lot more sustainable in the process.

Let’s look at the tech a bit closer — reverse osmosis is not a new development. What differentiates your process?

NE: The reverse osmosis technology has been around for decades and it’s been built on a sequential process, where in order to reach high efficiency, the water need to go through many sequential membranes until sufficient water has been purified.

We found a way to turn that into a parallel closed-loop circuit that enables us to squeeze out all the water and all the energy that we’ve invested before we have to discharge anything, and that makes it a far more efficient and reliable process.

Was there one pivotal moment when you decided that working towards addressing clean water was how you wanted to invest your energy?

NE: I think that I became a big believer in this technology well before I decided to take part in commercializing it. I certainly had pivotal moments in my life before and after, but they were all around trying to make something great and bring value. When I saw this technology, I realized that this is one place in which I can potentially make a big difference in the world. Nothing has changed in that respect, and there’s still so much to do because we’re still on the beginning of our path.

We know that we have the best technology and the best product, and we know that in ten years most of the market will work with our technology. It’s a matter of bringing it there as fast as we can, as effectively as we can.

You’ve spoken about working with big corporates, but how do you help smaller communities purify their water?

NE: We have projects in Latin America, where we help smaller communities desalinate seawater in order to make it potable. We have municipal projects in the U.S., such as San Diego and Los Angeles, where we help them to reuse wastewater.

However, our major focus is on the industrial sector because frankly, in developed countries, they are the biggest consumer of water, and their process is inefficient. We believe that the solution always begins from eliminating inefficiency, reusing the waste you have, and only then can you consider going to the extreme, which is desalination. This is the marching order that we follow.

If we stay on our current water usage track, what do you imagine the world will look like in 25 years?

NE: Well, it’s not a matter of guessing, it’s a matter of knowing. We’ve seen many thirsty societies — Singapore, Israel, and Australia, for example. The order for solving water problems is always the same: it must start with efficiency, using what you have, then reusing, and then desalination. We already have the recipe for success. The problem is that the ingredients we had so far as a society were not enough.

Unfortunately, the best solutions that exist are incredibly inefficient. That is, until we showed up. We bring decision makers in the industrial and municipal sector a whole new tool that enables them to make a significant step change in how they treat their water.

But in the greater scheme of things, the world is marching pretty quickly in a very clear direction, and as individuals, communities, industries, and a human collective, we will have to reuse and desalinate, because there is simply no other way.

Do you face challenges getting buy-in from those key decision makers?

NE: I think our major challenge is the fact that these big companies and municipalities already believe they’re getting the best value, simply because they live in a sector that has not been disrupted in so many decades. They have a very deep belief that they’re doing the best, and it’s hard to persuade them that there’s actually much better.

Lucky for us, we already have dozens of Fortune 500 companies buying from us, and each of them has come back to buy more and more systems from us. By now, all of them are repeat customers. We’re doing the right things. However, as a sector, innovating in water is relatively hard because people have the mindset that everything is already resolved.

8 Ways to Help the Right Clients Find You

8 Ways to Help the Right Clients Find You