Cyrene Quiamco “CyreneQ” is a content creator specialized in Snapchat and one of the top social media influencers. She was named one of the “Most Fascinating People on the Internet” by Cosmopolitan and “Top 50 Best People on the Internet Right Now” by Tech Insider. Cyrene was nominated for a 2015 Streamy Award for Short Form Creativity and was a finalist for a 2015 Shorty Award for “Snapchatter of the Year.” The following is an excerpt from 3 Billion Under 30: How Millennials Continue Redefining Success, Breaking Barriers, and Changing The World, to which Cyrene is a contributor.

When I was little, my mom and I used to daydream about our ideal future. We laughed and giggled as we took turns making extravagant additions to blueprints for our dream house. We made a list of places we wanted to travel and things we wanted to do. Those ideas seemed farfetched and impossible at the time, especially living in a country with very limited opportunities, where it’s almost impossible to find a job past the age of thirty and where dreams can only get accomplished by going somewhere else. Even leaving seemed like a dream itself.

I was born in Bacolod City, Philippines. To most tourists, the Philippines is a beautiful vacation spot with stunning white sand beaches and extravagant shopping centers, but there’s an entirely different world behind the façade. 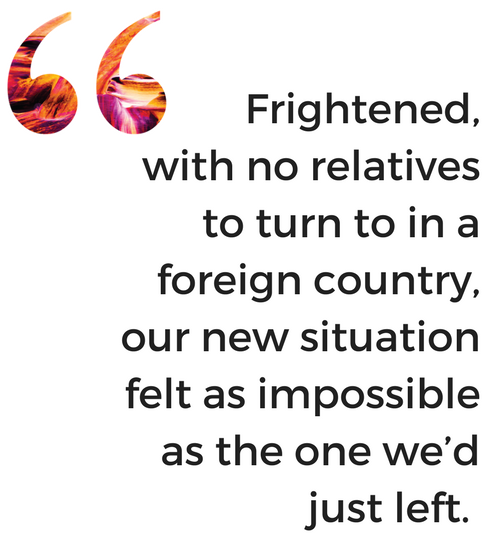 When I was seven, my mom was left to care for my sister and me by herself after an unfortunate turn of events. It’s challenging to be a single mother, but without a job, and in a country where it’s so difficult to find work, it is nearly impossible.

She was never tired or hungry, despite always staying up to see us to bed or forgoing food so my sister and I could eat first. In fact, I only ever saw her in a happy mood, despite our hardships. She sold the land she had hung onto for years (we’d hoped to build our dream house there) so we could get visas. She gave up one dream to invest in a bigger one: going to the United States. Frightened, with no relatives to turn to in a foreign country, our new situation felt as impossible as the one we’d just left.

We lived in a small apartment for many years. My mom worked a part-time job so she could still spend ample time with us; she never missed a school performance or an award ceremony. Even with her small income, she still made the finances work. Time and time again, she made the impossible feel possible, and watching her make it happen instilled in me the belief that there’s nothing I can’t do.

I soon started second grade in a small, private school in Little Rock, Arkansas, taking into the classroom the mindset that I could do anything. I became an Honor Roll student, won multiple science fairs, reigned as the undefeated winner in an annual art contest, and earned Student of the Year, equivalent to valedictorian, of my graduating eighth-grade class. I put 100 percent effort into everything I did because of the example set by my mom. I wanted to show my mom that her sacrifices and efforts were not made in vain. 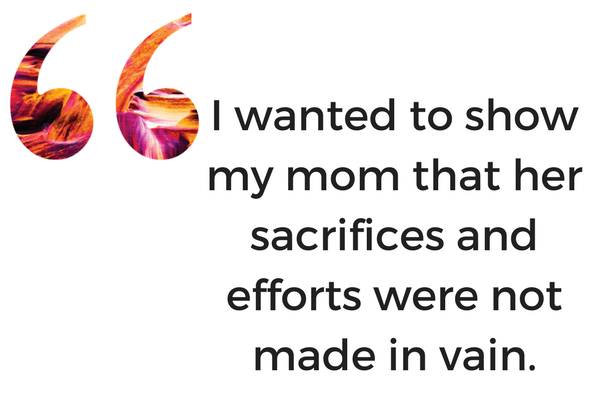 In high school, I graduated as one of the top ten students in my class and was awarded over $200,000 in scholarships for college. While awards and recognitions are great, they only define success in one way. I didn’t feel satisfied. To me, I hadn’t achieved anything meaningful unless I was able to share the experiences with my family and the community who made it possible for me to thrive in the first place. I started donating my artworks to fundraisers and charity auctions. By my junior year in college, I was able to take my family on two vacations before leaving to study abroad in Seoul, South Korea, and Hong Kong. One summer, we visited the Philippines and the next summer, Hong Kong, using the money I had saved up in extra scholarship funds.

With remaining scholarship funds and income from freelance graphic design projects, I was also able to buy my very first house and pay it off in full. It was almost identical to the dream house my mom and I envisioned when I was younger: two stories tall, with a wraparound porch, three bedrooms, three bathrooms (one with a Jacuzzi tub), and even a chandelier!

But the house was far more expensive than what I could afford. It was impossible to meet the seller’s asking price, but I knew from experience that “impossible” was just a starting point. It was a foreclosed property, so just for fun, I bid half the asking price (which was already below market value). Of course, I was promptly denied.

Months passed, and the house eventually went under contract to someone else, leaving us a bit discouraged. After a few weeks, I looked at the listing again. It was back on the market, and this time, at a new lower price — though still above what I could afford. With the mindset that nothing is impossible, I bid again. And great news came: my offer was accepted.

By age twenty-five, I had a high-paying job, with my house and car paid off, allowing my mom to retire early. But my dream was becoming a little blurry. I was in a cube all day, and by the time I came home, I had no energy to spend quality time with my family, let alone travel or enjoy our dream house. I hit a plateau and I thought that maybe this is as good as the dream can get.

With a little light of hope still shining, I decided to find a way to work from home. I created several websites I planned on monetizing. There were several failed attempts, and it wasn’t until I created The11thSecond.com, a website dedicated to the app Snapchat, that an unexpected opportunity arrived. While Snapchat was still in its prime, one of my friends introduced me to the world of Snapchat Art, drawn using the tools on the app, and I became fascinated with these disappearing and simplistic works. 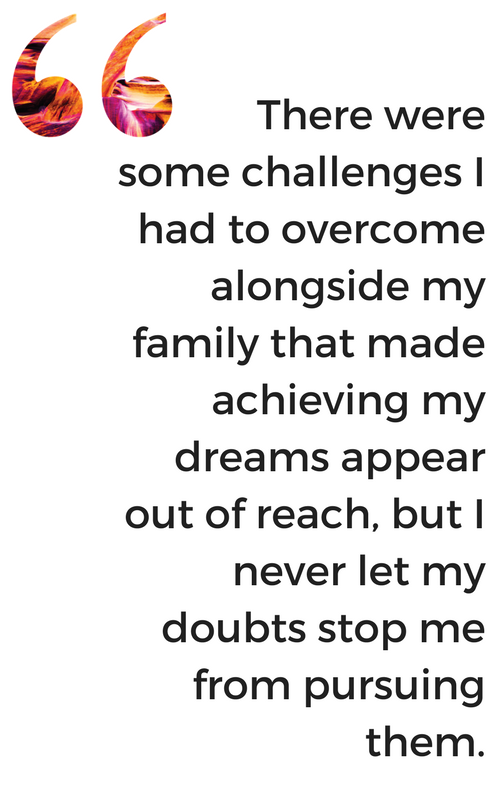 As you may or may not know, Snapchat (at the time of writing) is a disappearing messaging app. Messages, videos, and art all vanish within seconds unless you purposely save them by taking a screenshot. I didn’t want these masterpieces to go to waste, so I created a website to preserve and showcase them. Through the site, I had the chance to interview and collaborate with emerging Snapchat artists like Shonduras. Little did I know, it would soon become a community for Snapchat influencers to connect, discover, and collaborate in helping each other rise to the top.

Finding someone to follow on Snapchat who you don’t already know is very difficult right now. Unless you are already famous on another platform and siphon your following from that media, it’s nearly impossible to expand your audience. But I had already learned that nothing is impossible. Through the connections we made on the website, the Snapchat creators collaborated, gave each other shout-outs, and grew enormous followings through partnerships and word-of-mouth.

I became a Snapchat influencer myself in the process. Several high-profile publications soon featured my Snapchat art. After that, brands started contacting me to work with them on some of the first-ever Snapchat marketing and advertising campaigns. The demand for my services grew and grew. I was traveling at least once a month to experience some of the most amazing events I had ever been to. I got to interview celebrities on the red carpet, bring my family to Snapchat and enjoy a major theme park, view exclusive movie screenings, and travel the world.

I was getting paid up to $30,000 per Snapchat campaign, which eventually surpassed what I was making at my corporate job. After three years, I decided to quit my old job to pursue this exciting opportunity exclusively using Snapchat. On this path, I work from home, travel all over the world, and spend time with my family — just like we imagined our future would be! Time to dream bigger, perhaps? Who knows what’s possible now?!

I’m no different from anyone else. I wasn’t born with a silver spoon, and nothing was given to me. There were some challenges I had to overcome alongside my family that made achieving my dreams appear out of reach, but I never let my doubts stop me from pursuing them. By ignoring those who doubted me, and not feeling helpless because of where my story began, I am living my dream today.

What’s stopping you from achieving yours?

Jared is the co-author of 3 Billion Under 30 and 2 Billion Under 20, hailed as the #1 Entrepreneurship Book of 2015. He’s also a global speaker on Millennials in the workplace, and a marketing specialist for some of the world’s top thought leaders and companies.