How a Powerful Story Helps You Find Great Partners

In our business, we have a habit of making people cry.

It started in the early days, when my business partner, Sam Goldman, and I were trying to raise seed funding for d.light through business plan competitions and angel investor pitches. We had a very simple slide deck, comprised mainly of photos, and two props: a kerosene lantern and a prototype portable lantern.

But we had something far more effective than the most sophisticated PowerPoint or presentation could provide: we had a powerful story.

The story began with Sam’s stint as a Peace Corps volunteer, when he lived in an unelectrified village in the Western African nation of Benin. One night his neighbor’s son accidentally overturned a kerosene lamp and suffered third-degree burns over most of his body. That incident prompted Sam to ask: Why, in the twenty-first century, were so many people still using dangerous and expensive kerosene for light? 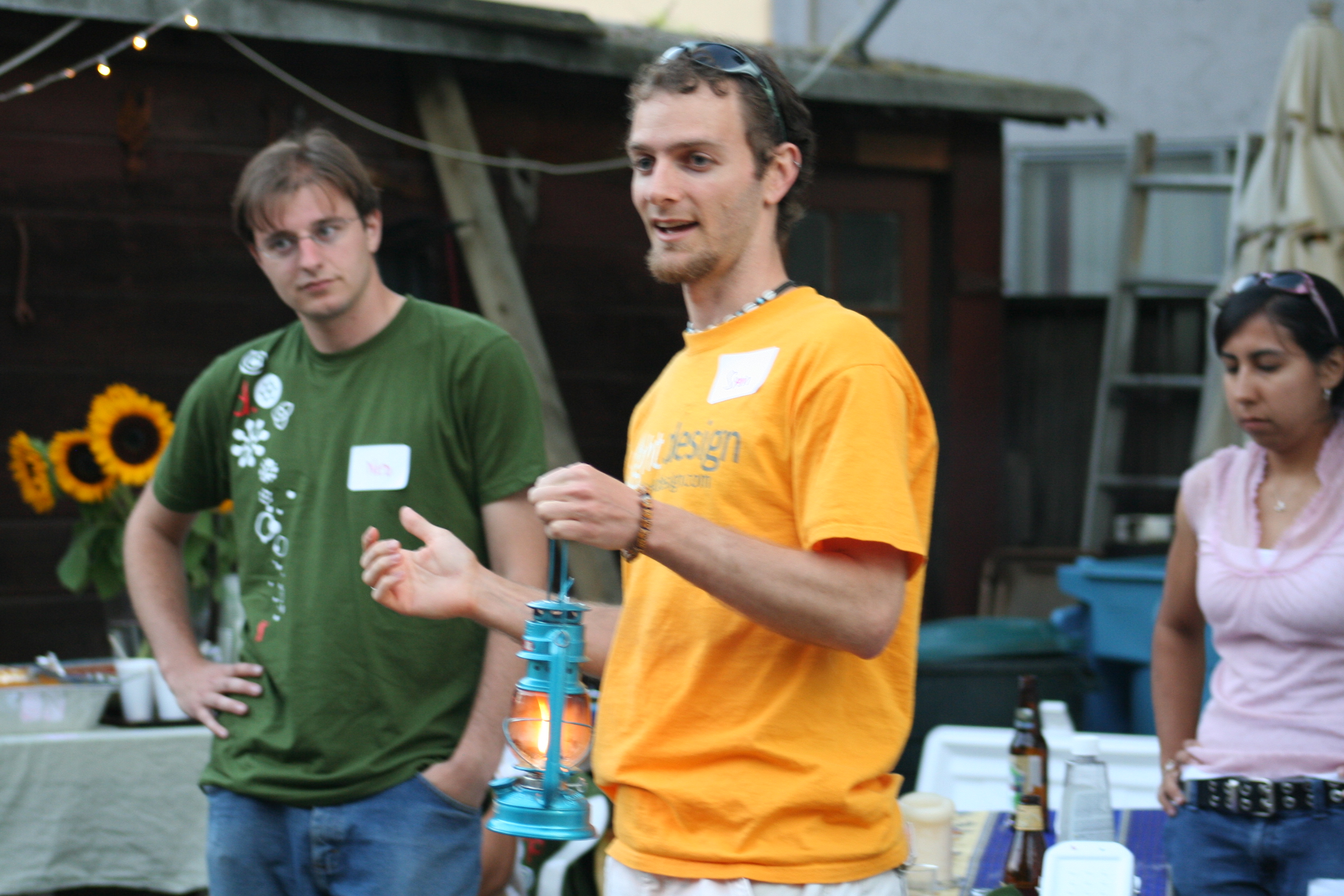 Sam and Ned presenting their prototype through story in the early days. Photo courtesy of Ned Tozun.

To drive the point home, we would light our kerosene lantern and allow clouds of black, noxious smoke to fill the room — whether it be an investor conference room or a business school classroom. We would extinguish the lamp after just a few seconds, but the looks of surprise and alarm remained on the audience’s faces long afterward.

A powerful story is far more effective than the most sophisticated PowerPoint or presentation. Tweet This Quote

Sam and I would spend some time on our business plans and projections, but then we would be sure to close with another impactful story. This one was about a woman in Myanmar named Mi Yah, who had tried one of our earliest prototypes: a string of LEDs attached to a battery. We visited her a few days after leaving the lights with her. She wept openly as she told us how much her life had changed, from her brick-making business to the well being of her five children.

When we finished our presentation, it wasn’t uncommon for us to look around the room and see people wiping their eyes.

In those early days, we learned an important lesson: No matter how powerful or influential people are, no matter how much money they control, they are still human. Even the most hard-nosed, numbers-driven investor is drawn to stories with meaning and impact.

Even the most hard-nosed, numbers-driven investor is drawn to stories with meaning. Tweet This Quote

Scientific studies have consistently demonstrated the power of storytelling. People remember stories far more than they remember numbers, no matter how many zeros might be in them. Individuals primarily evaluate brands based on emotion, not facts or attributes.

According to experiments conducted by executive and Claremont professor Paul J. Zak, “character-driven stories with emotional content result in a better understanding of the key points a speaker wishes to make and enable better recall of these points weeks later.”

In the business world, the idea of using stories in marketing and sales isn’t new. But we’ve also found storytelling to be effective in recruiting partners, investors, and employees.

We Want to Be Part of Good Stories

When d.light was first getting started, potential employees, suppliers, contract manufacturers, and distribution partners had little reason to want to work with us. We had no proven track record, and our scale was small. In order to make our products affordable to base-of-the-pyramid families, we were very frugal with costs. We actually asked people to accept less financial compensation than they were accustomed to.

People remember stories far more than they remember numbers, no matter how many zeros. Tweet This Quote

Many people, reasonably, said no. But a surprising number, including extraordinarily smart and talented individuals who had plenty of other opportunities, said yes. Not because it was the rational choice, but because they were moved by the story of why d.light was founded and the customers we were trying to serve — and they wanted to be part of it.

In his book A Million Miles in a Thousand Years, author Donald Miller discusses how we all want to be part of a story that is bigger than us. We want to live our own hero’s journey, with a mission so meaningful that we are wiling to sacrifice and push past obstacles and fears.

This is why Sam and I got involved in d.light in the first place, despite the fact that we both had attractive job offers from giant multinationals — he from Wal-Mart, and I from Google. Our initial salaries with d.light were less than half of what we would have made elsewhere.

We all want to be part of a story that is bigger than us. Tweet This Quote

Both of us have spent years living in developing countries for the company, and we have worked so hard that we have become very familiar with burnout. It hasn’t been an easy road in the slightest. But what a story we have been part of.

We Find Like-Minded Partners Through Our Story

Nowadays, d.light has grown enough that we don’t need to rely as much on our story to woo employees or partners. But we still make sure to tell the stories of our founding and our customers because that, more than anything, demonstrates who we are as a company. 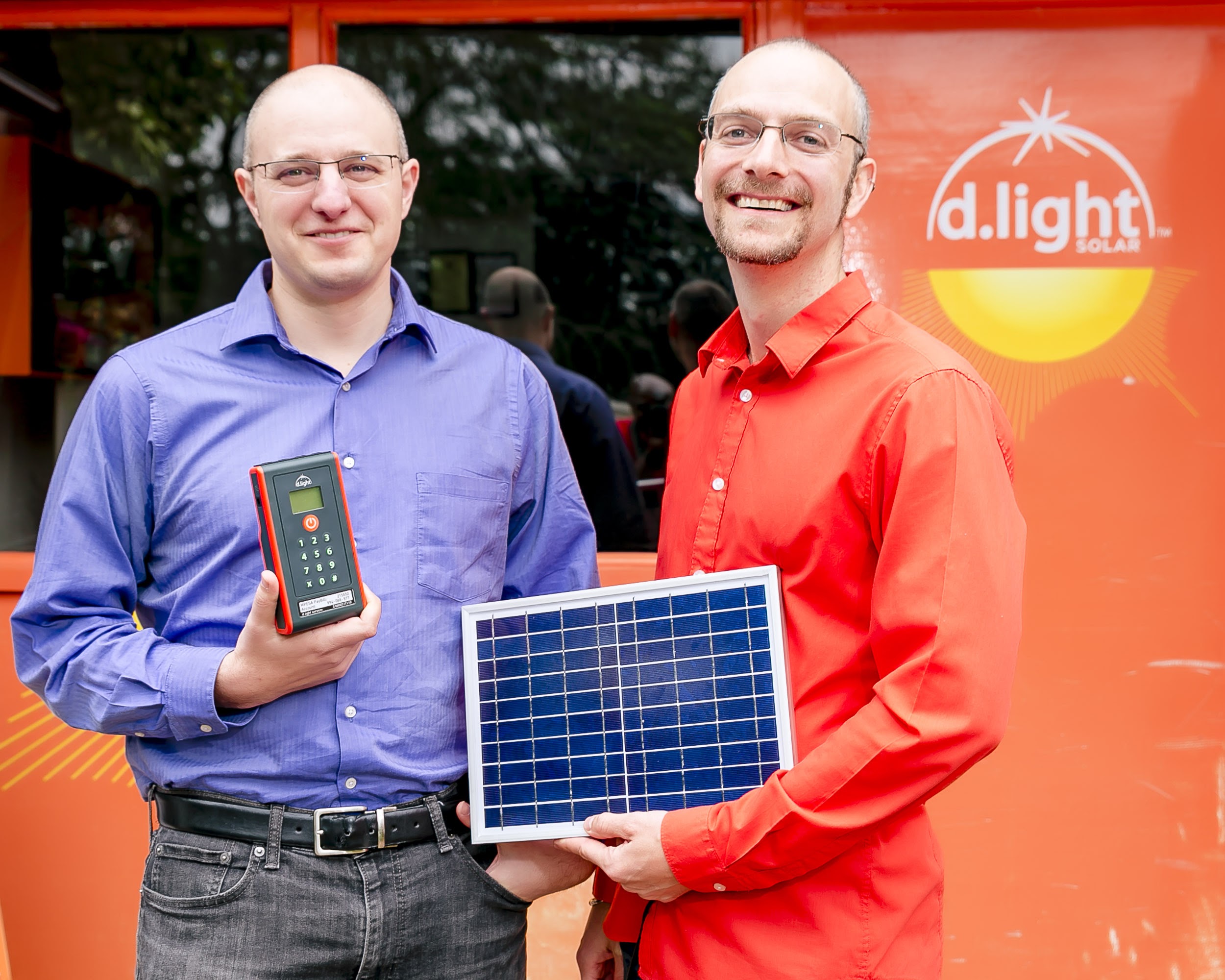 A current shot of co-founders, Ned and Sam, with d.light products.

It helps that what we do naturally lends itself to stories of change, transformation, and impact. In addition, though, the storytelling helps provide tangible expressions of our mission and vision. It brings the lofty language into the everyday in a way that almost every individual can relate to.

No matter how powerful or influential people are, they are still human. Tweet This Quote

If we meet someone who is moved by that story, then we know there’s a good chance we could work together well. If someone doesn’t connect with the journey that d.light is on, then it’s an indicator that we may not be aligned in our goals and priorities.

Recently, one of our human resources managers told me that he likes hiring people who cry during their interviews with d.light. Empathy is one of our core values as a company, and what better way to evaluate empathy than to see someone moved to tears by the stories of families who do not have access to electricity?

Obviously, the story of d.light is not one that everyone can or should be part of. But there is a meaningful story that each one of us can participate in. It’s through that story that you can find like-minded partners and supporters.

Ned co-founded d.light in 2006 and currently serves as the company’s CEO. Ned has been recognized by Forbes as one of the world’s top thirty social entrepreneurs. Prior to d.light, Ned founded several consumer product start-ups in Silicon Valley. Ned graduated from Stanford with degrees in Computer Science and Earth Systems, and returned to Stanford to earn his MBA.