How Rate-Based Thinking Can Transform Your Goals Into Reality

Goal setting is huge in the world of entrepreneurship, but are we doing it entirely wrong?

Most of us are used to setting goals around specific outcomes we’d like to achieve. We want our business to make $10 million next year. We want to learn a new language. We want to get 100,000 customers, etc. For obvious reasons, I call these ‘outcome-based’ goals. Now as good as we are at setting them, we’re nearly as good at missing them; and usually for three common reasons:

Rates help tackle unknowns: Whenever we’re doing something that hasn’t been done before, we face significant unknowns. In these situations you may not know what the solution form should be, or you may have a form in mind but have no idea on how to realize it. Such situations are about risk and confidence and are perfect for rate-based goals.

In a normal outcome-based goal, you are charging away at your goal, and risk is something you avoid or impatiently swat away like flies. Using a rate-based goal, risk is something you can take head-on. After all, sizing up the unknown and making it known is essential to finding your way. You can define a rate for your systematic experimentation and exploration of the unknown to elucidate the path to success.

So to tackle the unknown, you can set a definite rate at which you’ll try things. If you can find a way to establish a rate of three experiments per week, then 10 weeks later you’ll have massively bolstered your chances of success.

Rates help you get real: So many startups expect their growth to follow the hockey stick curve. And so many startups fail to see anything of the sort. If instead you take your goal and transform it into a daily rate, your brain will stay focused on what it will take to make your dream real. Knowing the rate will also give you faster feedback on when an approach is not in the ballpark. Of course, you may say—some things really do follow exponential curves—but take a look at this: 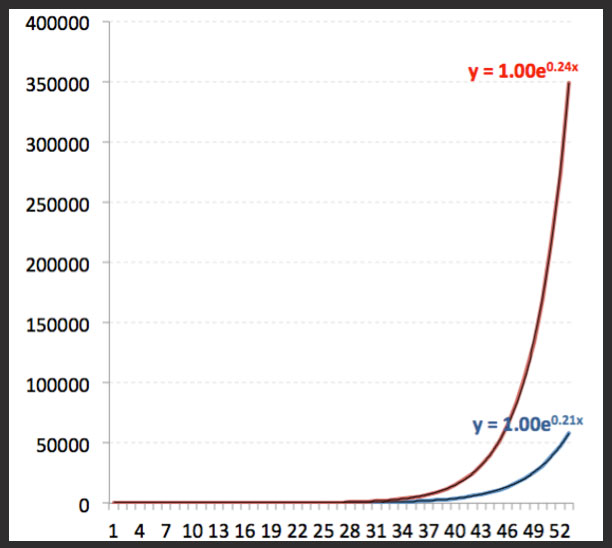 Here are two hypothetical exponential curves for a business—plotted week-by-week for a year. If the business hoped to reach 350,000 people by the end of the year (red curve), then you can see that the lower curve in which they miss their target by a mile actually looks nearly the same for the first 33 weeks. As a manager, it’s not ideal to expend 2/3 of your timeline and resources before you know that you’ll miss your target dramatically. By then you’ve probably put a lot of operational machinery into place that might take months to modify—at which point you’re out of time and out of business.

If instead you define a simple rate, then you can be laser focused on establishing that rate. As soon as that’s achieved, you need only sustain the rate—a far easier task than figuring out how to bring massively more customers in at the end.

Rates help to get you going: As for not even getting started, rate-based goals break down the psychological barriers to starting. If you think getting to 100,000 people sounds impossible, break it down to the daily, or even the hourly, (or even the minute!) and go after that goal. In this case, to reach 100,000 customers in a year, you’ll need to sign up one every 5.25 minutes. So get out there and sign up one customer, and don’t worry too much as to whether you can do it in 5 minutes yet.

Once you’ve hit the atomized goal, you’ll have a much clearer sense of what it takes to get customers and you can then systematically work on bringing the time down to improve your rate. So perhaps the first customer takes three days to sign up. You can now analyze the steps, conversations, questions, approaches that sealed the deal and figure out how to bring them down in terms of time or scale them up in terms of reach. You can also quickly eliminate approaches that could never be brought down to that timescale.

These quick assessments get you focused and going far faster than a huge intricate build and release Gantt chart. Starting small and focusing on the rate makes impossibly large and dreamy numbers feel real and immediate. And immediacy is what prompts you to action.

Convert your most important outcome-goal into an approachable rate-based goal. Make it your primary mission to achieve that rate instead of stressing about the big outcome number.

Update: More broadly than what is discussed in this article, I’ve been exploring the idea of “verb-ifying” goals. When our goals are defined by nouns, then they are all about what we’ll get and what we’ll attain. When our goals are defined by verbs, they become about who and how we want to be in the world. These goals have a deeper character to them and ultimately help us achieve nouns anyhow. It’s simply that the nouns become the milestones and feedback on how we are living the verbs instead of the end themselves.

Tom is the CPO and Head of X at Factory building teams that can build anything in the world. He is an entrepreneur, teacher, rapid prototyping enthusiast and part of the founding team of Google X.