This post is part of a series of stories featuring the entrepreneurs who participated in Unreasonable East Africa’s 2015 program.

In Uganda, preventable water-borne diseases like diarrhea are the leading cause of death for children under the age of five. Ten million Ugandans—nearly a third of the entire population—lack access to clean water. They rely on boiling water to make it safe, which in addition to being time consuming, burns valuable charcoal that would otherwise be used for cooking.

Sustainable Point-Of-Use Treatment and Storage (SPOUTS) of Water makes the pots, about the size of large flowerpots, in a factory near Kampala, Uganda, from locally sourced clay and rice husks. During firing in a kiln, the rice husks burn away, leaving behind microscopic holes. The pots are then coated with silver nitrate, which is a biocide. When the pots are filled with water, the water seeps through the holes while physical contaminants get trapped. At the same time, the silver nitrate, which is a biocide, removes 99.9 percent of biological contaminants.

While the product is straightforward, SPOUTS of Water’s business plan is a bit trickier. The company has decided to enter the water-solutions space as a for-profit business, as the founders see that as the best way to make a lasting difference.

The idea of behavior change is that if you pay for it, you’ll care for it. Tweet This Quote

“We have created a product worth investing in that breaks the cycle of relying on free aid,” co-founder Kathy Ku says. “We’ve seen communities leave water pumps in disrepair once they’ve broken. The idea of behavior change is that if you pay for it, you’ll care for it. We believe that we can do the maximum amount of good if we are a profitable business.”

Traditionally, the problem of safe drinking water has been tasked to NGOs and nonprofits. Their models frequently deliver short-term solutions like distributing bottled water in times of disease outbreak, or building one centralized pump in a community, which isn’t always maintained. Aid models in Uganda also often rely on precarious outside funding, which drives them toward projects that appeal to donors, instead of toward decisions based on the needs and nuances of the region. 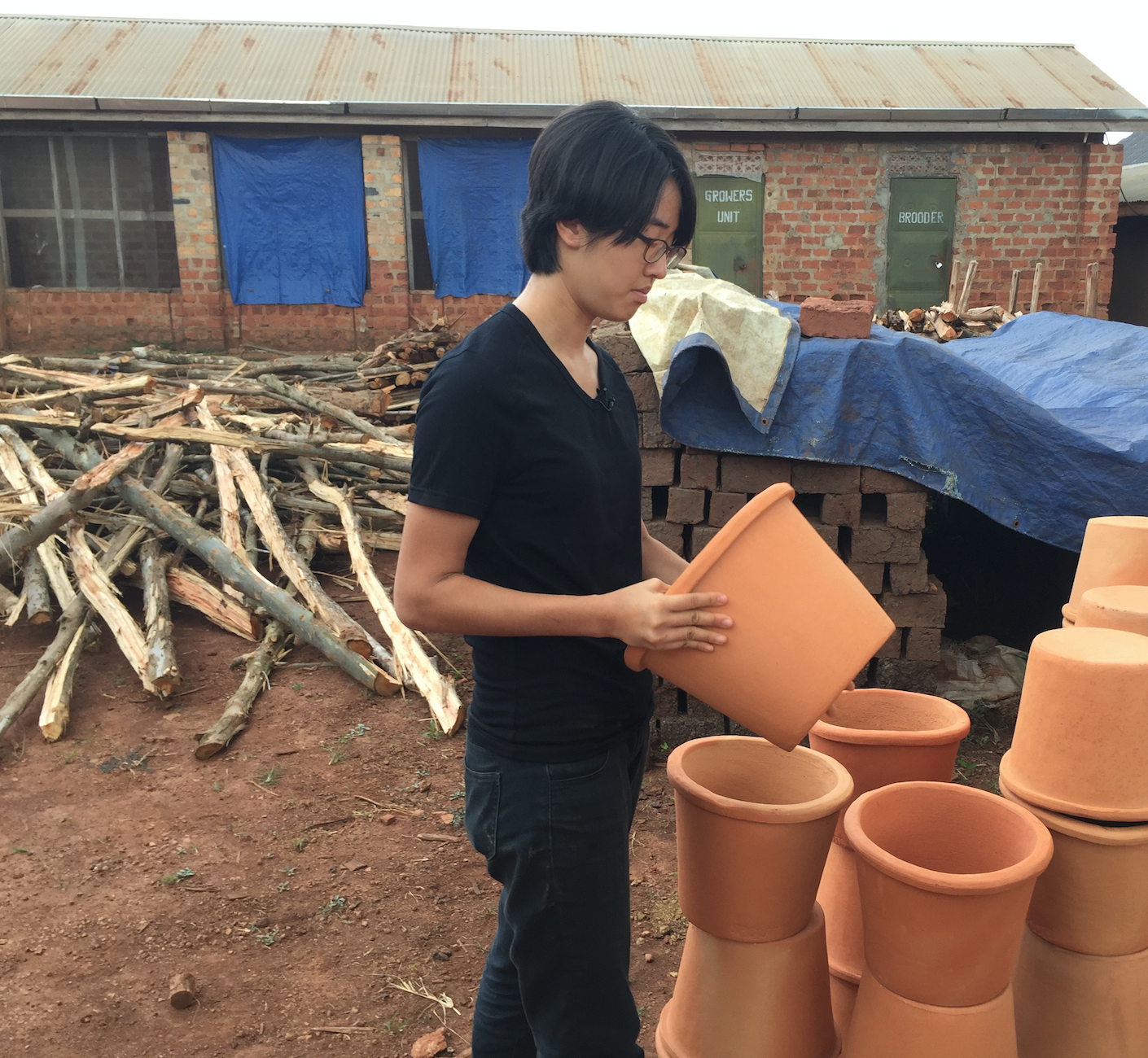 In addition to making sure customers have a sense of ownership with their filters, SPOUTS of Water’s solution creates a workplace for Ugandan potters to carry on the long tradition of making pottery and gives them a chance be an integral part of the mission to increase access to clean water.

Aid models often rely on outside funding, driving them toward projects that appeal to donors instead of decisions based on the needs and nuances of the region. Tweet This Quote

Nearly 75,000 people currently use the pots, which sell for $20 through retailers. SPOUTS partners with microfinance institutes to help customers pay up front so that cost is not a limiting factor in reaching communities in immediate need. SPOUTS does make an exception in the cases of refugee camps, schools, and prisons, where the company distributes filters for free.

“Installing in the prisons was a reminder for why we offer free installations in public places,” Ku says. “At the prison, there were 1,500 people crammed into close quarters without any clean drinking water. They drank from the lake. Because it’s a closed space, we could see the immediate effects. We could see them being maintained, people lining up to get water, and people came up to us to thank us.”

SPOUTS currently sells around 400 pots per month. The company plans to scale up to 2,000 per month by the end of 2015 and expand into South Sudan.

Ku has obsessed about water access since her first stay in Uganda in 2010. She was teaching at an all-girls school and would make the two-kilometer walk each day with her host family to get water. Back at Harvard, she filled notebooks with designs for water filtration systems and tried to get other people interested. That’s how she met co-founder John Kye, who studied economics and graduated in 2014. Kye and Ku now both live in the SPOUTS factory.

SPOUTS partners with microfinance institutes to help customers pay up front so that cost is not a limiting factor. Tweet This Quote

Ku first proposed to build the water filter factory in 2012. Her efforts were recognized when SPOUTS of Water started winning awards and grants, including the Harvard Deans’ Cultural Entrepreneurship Challenge. Her vision grew legs with the help of Kumi University, which donated the plot of land for the factory. This early recognition validated the big goals she set before graduating and moving to Uganda. Ku is a rare breed. She is driven by ideals, yet firmly grounded in hard science and engineering.

“The big picture idea is no matter what I do, I hope my work goes towards leveling the playing ground,” Ku says. “It’s a lottery that I have the set of resources I do. Broadly, you want to pay that forward. I see it as if you have a far-fetched goal, something I’ll always work towards. That’s how I prefer to see things, without limits.”

Eventually, when the filter factory is fully self-sustaining, Ku hopes to attend medical school and then continue to address global health needs.

Cayte is an Unreasonable correspondent. She collects stories and lessons from and for entrepreneurs dedicated to solving the world's most pressing problems. She writes on a variety of subjects including science, technology, international development, the environment and travel.