rom a contemporary cultural vantage point, slavery may seem like a distant or altogether extinct barbarism, but the reality is that modern-day slavery still plagues much the world, whether in the form of sexual exploitation or forced labor.

Many people are unaware this kind of slavery still infiltrates society, and that the products they regularly buy can contribute economically to the perpetuation of deeply engrained systems of oppression.

Moreover, the issue of slavery cannot sufficiently be eradicated unless an alternative exists to take its place. Not For Sale is an organization that works not only to support individuals who have been exploited, but also to create business opportunities for those communities that are most vulnerable to slavery. Unreasonable spoke with the co-founder and President of Not For Sale, David Batstone, about the ways in which his organization leverages business ventures to eliminate human trafficking.

What sparked your interest on the subject of human trafficking in the first place?

DB: I wasn’t looking for it; it found me. It was in a restaurant in the San Francisco Bay Area that I used to go to on a regular basis. I loved the tandoori chicken and the papadums, I just didn’t recognize that the young people who were waiting on the tables and washing the dishes were anything other than members of the extended family who owned the restaurant. So, it was a real shock to learn that my favorite restaurant was a human trafficking ring that brought hundreds of teenagers from the area of Bangalore, India, into California for the purpose of forced labor – first in the restaurant, and then they’d be taken out to fruit or vegetable fields in northern California. 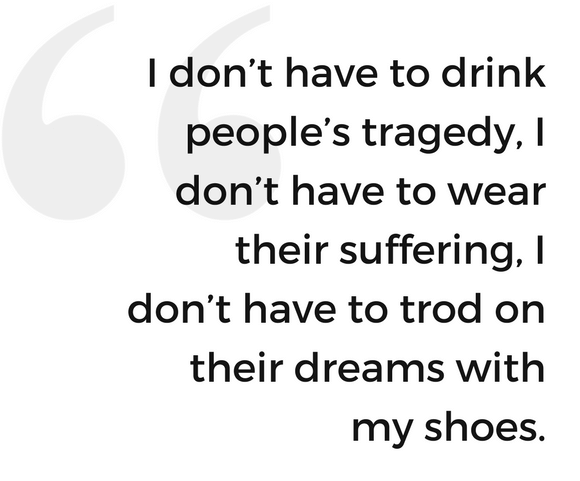 I started investigating where else was this happening in the United States and I found out that trafficking was prolific in every major city. I decided to take a year leave of absence from my private equity bank and go around the world and uncover the economics and the practices of modern slavery.

Can you explain what Not for Sale exists to do and the specific problem that you are aiming to solve through the organization?

DB: Not For Sale aims to eradicate human trafficking in the world. We realize that so much of human trafficking happens because of people living in conditions of vulnerability. Our model is to intervene when people are being taken advantage of, when they’re being trafficked, identify the causes and conditions that led to their trafficking, and then bring about a long-term solution.

What do you think other organizations get wrong about their approach to human trafficking?

DB: Most organizations that work in the trafficking area work downstream. They’re pulling bodies out as they’re drowning and they’re flailing — and that’s really important work. But it’s not enough in order to go upstream and find out how we stop people from falling into the river in the first place.

Sometimes it feels like so many of our efforts go around addressing the symptoms and the crises, and we never get to the point where we actually think about, “How do we end this?”

Can you talk a little more in depth about your process?

DB: If our ultimate goal is to bring economic and social stability to people who are at risk, then we want to create viable companies or enterprises that employ people and provide opportunities for them to make choices about their future.

All of our work is very entrepreneurial in that we’re trying to empower people from day one by engaging with them around potential solutions in their area. The results come from companies like REBBL, Z Shoes, and Square Organics, so we have a number of companies, but we didn’t get there in a day. We got there because we engaged with local communities.

You work in a number of different countries, so how do you address the challenge of tailoring that process to each unique place?

DB: We see slavery as a tool; we’re not fighting slavery, we’re trying to find a replacement for it. The reason that slavery is such a useful tool for people who are only concerned about making money is that it’s an economically incentivized way to make money. If you don’t have to pay people, you lose no cost to your labor, so you’ll have a higher profit margin.

We try to come up with a better way of making a diamond, making a beverage, making a shoe. If we can find a better alternative, then we’re going to disrupt and undermine the use of the tool of slavery. For centuries, slavery has been effective because people have been economically rewarded for their behavior. Let’s change the rewards and let’s change the model.

That’s why we need so many consumers, which we call change agents. We need people to be involved in partnership with us. Because by changing their purchase patterns, by buying a pair of shoes that has dignity, then they are undermining the tool of slavery.

Many products that we use every day support those systems of slavery. How has your involvement with Not for Sale influenced your perspective on what you purchase?

DB: My own personal slogan is “Be everywhere.” It means I don’t have to drink people’s tragedy, I don’t have to wear their suffering, I don’t have to trod on their dreams with my shoes. One thing that I’m looking at is what I have on right now. I’m wearing a pair of my own shoes that are made from rubber of the Amazon, harvested by the Amazon people. I’m drinking a coffee that is made in the highlands of Thailand, empowering people who for centuries have been enslaved and exploited.

I don’t have to be Mother Theresa and go to Calcutta. I can be who I am, everywhere. We’re now living in a world where that’s possible to do. It’s our choice. It’s not a matter of I can’t find a fashionable pair of jeans. I can wear jeans now that are empowering people and giving people dignity. Now it’s our choice, the kind of world we want to live in, the kind of person we want to be.

When you go into these other countries and are building this programming, do you ever experience pushback to your attempt to break this cycle? What kind of reaction does that invoke?

DB: It’s inevitable. It’s all about experimentation and evolution. I think it’s really important for both companies and NGOs to be learning cultures where every week you’re getting smarter. Thank god you didn’t interview me last week, because I was pretty stupid. I’m smarter this week, right? It’s an on-going evolution, and organizations make you do that as well.

The other challenge with non-profits is that they rely on a business model or a funding model that’s not sustainable. They spend the money they raise, and then the money they deploy in their work doesn’t replicate itself. It doesn’t return anything back into the community or back into the NGO, so they have to go out and raise more money. They’re constantly having to raise money that they spent. That’s not scalable. Investment will stay the same or stay flat, so in order to scale change, you need to come up with a scalable model that enables you to deliver your work.

Among all the people you have met and all the stories of change you have encountered through this work, are there any particular stories or moments that have been especially impactful to you personally?

DB: I’d have to say that the most inspiring and moving personal connection I have had was to the very first project. I had not even intended to start an NGO when I went around the world to investigate human trafficking. My goal was to write a book and make it visible. I went to the north of Thailand and met a woman who had rescued 27 kids. They were living in an empty field because they had to escape Chiang Mai, where they had been trafficked, and the “owners” of the children said they were going to come after the woman who had rescued them and stolen their property.

These 27 kids were living on the dirt floor of a palm leaf roof with no walls, and I made a promise to them – I’d build this house for them. I keep going back. Last year I went back. Eleven years later, I go back, I meet the kids for their university graduation. The ones that were sleeping on the ground and were running from trafficking weren’t allowed to go to school because they’re ethnic tribal children in a country that keeps them out of school. To see them now entering professional lives, as university graduates, is astounding.

What’s the call to action for people who really care about impacting human trafficking, but don’t necessarily know where to start?

DB: For anyone who really cares, there’s going to be an incredible amount of information about the companies that are advertising how they’re producing their products differently and how they’re trying to solve problems with their model. Those are the ones to embrace, because there’s nothing that speaks to investors like a successful market.

I believe that if we open our eyes, we’re going to find companies all around us. REBBL is now the fastest growing organic health beverage in stores in America. It’s about paying attention to companies that bank the very engine of who they are behind their values — those are the companies to embrace.

Networking Is Not a Task — It’s an Art

Networking Is Not a Task — It’s an Art

Amanda Cary is the Editorial Apprentice at Unreasonable Group and is a senior at the University of Colorado Boulder. She is passionate about using storytelling to create meaningful change and inspire action.