Incentives to Tilt Businesses Toward the Needs of the Poor

A version of this post was written by Dennis Price and originally appeared on ImpactAlpha.

Companies often get fined for poor behavior. Now, some will get rewarded for behavior that serves the poor.

A pilot program funded by the Swiss government will pay bonuses to Latin American businesses that can prove that they are improving the quality of life of their poor customers. The enhanced revenues should make such high-impact businesses more attractive to private investors. That capital, in turn, should enable the businesses to expand sales, reduce costs and serve even more low-income customers.

To address the most pressing social and environmental problems, it is vital to find financing models that reward real, measurable impact. Tweet This Quote

The model, called Social Impact Incentives, is a response to the challenge facing market-based solutions to social problems: most high-impact businesses that serve the poorest of the poor often are not investable, and therefore are starved of the capital they need to grow.

Take for example, a Chilean business that sells affordable toilets to low-income customers in Santiago’s slums. The company contracts with a social-impact incentives payer concerned with the social conditions of slum dwellers. For the actual impact contribution of the firm’s product, a reduction in average days of diarrheal disease per household, for example, the business might get an incentive payment on top of its normal revenues. This supplementary income increases the profitability of the business, making it more attractive to those investing capital.

“To address the most pressing social and environmental problems it is vital to find financing models that reward real, measurable impact performance and thus prepare the ground for scaling outstanding solutions,” says Dr. Peter Beez of the Swiss Agency for Development and Cooperation, or SDC. “For us, it’s a proof of concept.”

Social Impact Incentives boost the viability of businesses serving the poor by aligning impact with profitability. Tweet This Quote

The $1.6 million pilot program, to be run by the Inter-American Development Bank, or IDB, aims to support four companies and “crowd-in” between $6 and $10 million in private capital. If the program is successful, the SDC will deploy the model in other regions, including sub-Saharan Africa.

“We have seen a vast number of outstanding social entrepreneurs worldwide who created high-impact solutions but struggle to raise the funds that allow them to scale,” explains Bjoern Struewer, founder and CEO of Roots of Impact, the German impact investing consulting firm that helped develop the social impact incentives model.

Roots of Impact, with the SDC, will manage the pre-investment process for the pilot program, and measure and validate the impact of each investment. The social entrepreneurship network Ashoka, with 6 offices across the region, will work the IDB’s 26 field offices to help identify the social businesses.

A body of evidence is emerging that it’s tough to build a business serving only the very poor. In a 2009 study, “Emerging Markets, Emerging Models,” Monitor Group reviewed 270 enterprises in India serving the poor and found less than 20 percent operating at or near scale and ready to take on investment. In a followup study in 2011, “Promise and Progress: Market-Based Solutions to Poverty in Africa,” Monitor consultants reviewed 439 enterprises targeting the very poor in sub-Saharan Africa; only 31 fit the bill as “investable.” 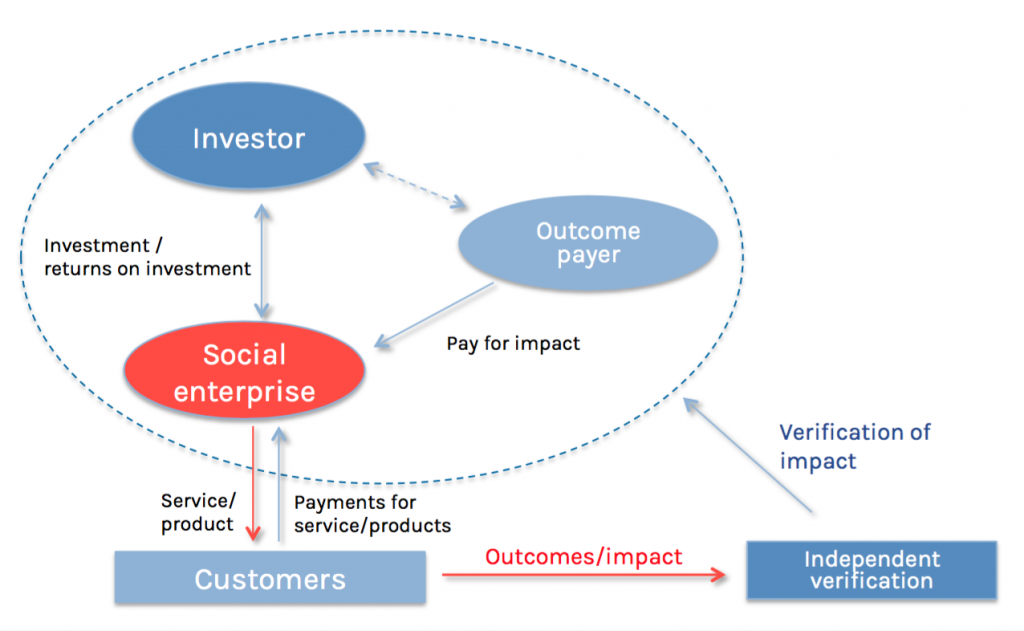 These low-margin businesses operate in difficult, unproven markets serving customers with minimal and inconsistent livelihoods. It’s no surprise the enterprises are often unattractive, even to impact investors.

Once a business attracts capital, it’s able to build capacity, increase revenues, and achieve a proof-of-concept. Tweet This Quote

The Social Impact Incentives scheme boosts the viability of businesses serving the poor by aligning impact with profitability. Once a business attracts capital it’s able to build capacity, increase revenues further while lowering per-unit costs, and achieve a proof-of-concept.

At this point, in theory, the business will have demonstrated its social impact and can sell its services to a public agency such as a local health authority, an education ministry or a city council. Or the business will have proved out its value proposition to customers and can attract investors to scale up operations.

Social impact incentives are the latest experiment in so-called “pay-for-success” financing in which public or philanthropic funders reward enterprises for their social contributions. Pay-for-success models have caught on as cash-strapped governments seek to enlist private capital in local and global development efforts. Social impact bonds, for example, are being used to finance non-profit service providers, with private investors repaid, with interest, by local governments if the service provider achieves its impact milestones.

Struewer says the there are two major differents between social impact incentives and social impact bonds. “One, our model works with social businesses with revenue streams, which massively reduces costs for the outcome payer,” he says. “And two, the incentive is not just about achieving a benchmark, but outperforming one.”

Government and philanthropic funders can also attract private investors to sectors ignored by commercial capital markets by using tools such as first-loss or loan guarantees, or low-cost loans. But pay-for-success models may provide the best mix of incentives.

A 2015 report from the Center for Global Development argues that models that raise investor returns (e.g. pay-for-success) are more efficient and effective than other catalytic public and philanthropic funders such as guarantees or low-cost loans.

Pay-for-success contracts “improve incentives for investors to choose and manage projects effectively, promote more contestable markets while reducing the costs of optimism bias, build public support by paying for success rather than failure, and reduce the need for policymakers to try (and too often fail) to pick winners,” write the authors of the report, “Guarantees, Subsidies, or Paying for Success? Choosing the Right Instrument to Catalyze Private Investment in Developing Countries.”

In growth markets across the developing world, low-income earners graduating to the emerging middle class are demanding services that outstrip governments’ capacity to provide. Market-based businesses and private investors may be able to help meet that demand—with the right incentives.

Will Money Help or Destroy the World?

Will Money Help or Destroy the World?