Our Astronaut/Fighter Pilot Scribe tells the story of crashing & burning (literally!) and how this changed the way he looks at risk & innovation forever.

The author of this post, Ron Garan, is a Fighter Pilot, Test Pilot, Social Entrepreneur, Astronaut, and Aquanaut. And most unreasonably, through his social enterprise incubator the Manna Energy Foundation he has helped to bring drinking water to millions in Africa in a completely financially self sustaining way via his company, Manna Energy Ltd.

I hear the word innovation constantly. The word is used in advertising, business plans, and countless seminars and conferences. Although there are cases of misuse and overuse for sure, I believe the reason why we hear the word innovation so much is because what is needed at this moment in history is, in fact, innovation. That is, innovation defined as coming up with better solutions – better solutions that come from doing something different rather than doing the same thing better.

Dialog is great but we need action–positive, disruptive action

In developing a strategy to use our rapidly advancing technology to produce innovation that will address our most critical challenges we need to step outside of our comfort zones, step outside of the way we’ve always done things and take some risk. 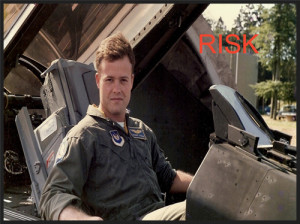 I want to share with you a story that has shaped every decision I have made concerning risk over the last 25+ years. This is a picture of me in my first operational F-16 squadron in Germany. I was a very stereo-typical young fighter pilot. A little cocky and I tended to think of myself as seemingly indestructible. A few months after this picture was taken on Sept 13th 1988, I was taking off in an F-16 at Shaw AFB in SC. Up until this point I had 1000’s of takeoffs and landings and nothing had ever gone wrong …until that day.

On this day as I was rolling down the runway in my single seat, single engine F-16, as I got a few feet in the air and raised the landing gear, I heard a pop followed by a loud explosion that knocked my feet off the rudder pedals and head back into my seat. As a single engine pilot we are trained to be acutely aware of our engine parameters. The engine appeared to still be running. At this point, I attempted to make a climbing turn with the goal of hopefully getting to a point where, if the engine failed, I could dead stick the jet in for a landing. As soon as I started the turn I realized that was not going to be an option. The jet no longer had any usable thrust and this close to the ground my only option was to eject. My concern shifted from trying to save the jet to trying to minimize the aftermath of a jet that was about to crash. Fighter aircraft have a button called the Emergency Stores Jettison that if pushed, clears everything off the wings. That day I was carrying fuel tanks carrying about 5,000 lbs of fuel under the wings as well as some other heavy inert stores. I thought for a second to buy some time by jettison some weight but elected not to since in front of me was rush hour traffic on a highway off the end of the runway. At this point I was heading straight for a trailer park. I turned the aircraft a little to the left to an area that was more sparsely populated. I then saw wide open woods further to the left and attempted to steer the aircraft there. As soon as I tried to turn the jet further to the left it went out of control and started to slice back to the right. 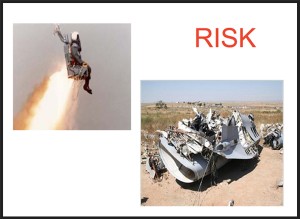 At that point it was very apparent to me that there was no reason for me to stay with the ship and I reached down and pulled the ejection handle. The realization that there was nothing more I could do probably saved my life because I ejected about 4 seconds prior to impact and probably less than a second from being out of the ejection envelope. This whole story took considerably longer for you to read than it actually happened. This whole story probably occurred in a timeframe of less than 20 seconds

I obviously survived the ejection and actually had no injuries at all. You would think that a situation like that would have some kind of effect on me, it would somehow change my outlook on flying, life and risk. For some reason, unknown to me, it did not. What would happen the next day would be the life changing wakeup call that I probably just hit the snooze button on. 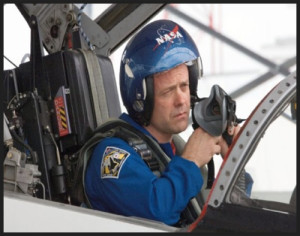 Ron in the cockpit of NASA T-38 Supersonic Jet Trainer

The next day, in the spirit of getting back on the horse, I was leading a formation of 4 F-16s on a training mission. Taking off first, when I was airborne I retarded the throttle out of after burner and heard a pop. I remember thinking to myself, “I bet it’s always done that and I’m only now noticing it because I’m being hypersensitive and aware” The next thing I heard was the low speed warning alarm come on indicating I had another engine malfunction. This time I was a little higher and faster and there was no rush hour traffic underneath me, just wide open fields, I pushed the emergency stores jettison button and unbeknownst to me had another malfunction and only the stores on one wing were jettisoned leaving my aircraft in an asymmetric condition that was not certified for flight. I was able to land my aircraft in the opposite direction on the same runway I took off from just as the last guy in my formation was getting airborne.

What got my attention was after 1000’s of uneventful takeoffs, I had 2 that almost killed me back to back. I wouldn’t say I was a dare devil but after that second incident, in as many days, I definitely changed. After that my eyes were opened and I saw risk in a new light. I saw risk as the price to pay for a benefit, I saw an emerging risk/benefit tradeoff.

This new outlook probably saved my life and carried me through many dangerous periods in my life; from flying in combat during the 1st Gulf war, to being an instructor at the AF’s Top Gun School (Fighter Weapons School) where over the course of my 3 years there I attended 5 memorial services for colleagues and friends of mine, to flying as an AF test pilot, to 2 space missions and 4 space walks.

In each of those environments, no mater what the situation was, the first thing I did was access where the safe exit to the situation was, unlike the young fighter pilot of my youth I didn’t blindly charge into a situation without first answering the question; “Where’s the way out if everything goes south?” But before I ever got myself into a situation where I could possibly need an exit strategy I first asked myself, was stepping into that situation worth it? Was the potential benefit worth the risk? The answer to that question sometimes was that the potential benefit is so great and the cost of not taking action so high that I was willing to enter a situation knowing I had no way out if things went south. These situations were very rare. I had a couple of these situations in combat where not taking action and putting myself at risk would threaten the lives of troops on the ground and certainly during space missions there were times where all I had to go on was a belief that what we were doing was having tremendous benefit for the world. 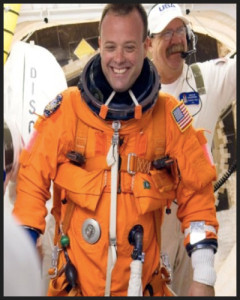 Ron about to board Space Shuttle Discovery

In order for an individual, organization or corporation to progress, grow and succeed some risk must be taken. The safest possible space program is one that never launches anything to space – but what good is that?

What NASA does better than probably any other organization in the world is to look at a situation and then spend a great deal of time and effort figuring out before hand every possible thing that can go wrong and develop plans that can be enacted in a very short amount of time to overcome those situations.

You have to have mechanisms in place to capture great ideas and emerging lower risk opportunities and streamline a path to action.

Lets say that someone has a great idea about how to improve global health programs, sustainability, or positive social impact. It must first be noted that ideas are highly overrated. 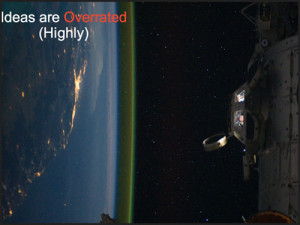 Ron photographed in the ISS Cupola over coastal Australia during the 6-month, Expedition 27/28 Mission

What I mean by ideas are overrated is: Every great accomplishment starts with an idea – however, an idea without action is empty.
After carefully calculating the risk and weighing all aspects of the risk-benefit equation, and evaluating the underlying motivation for a course of action, in order to reap the desired benefits, a decision must be made to not only commit to action but also there has to be a willingness to step outside of your comfort zone.

However, it is precisely those people and organizations that truly commit to making a positive change and stepping outside of their comfort zones and it’s precisely at those moments when we have the courage to embrace new and innovative ideas, approaches, and partnerships and collaborate across different disciplines, industries, cultures, boundaries and borders, those are the ones that affect real change in the world – Disruptive Change. 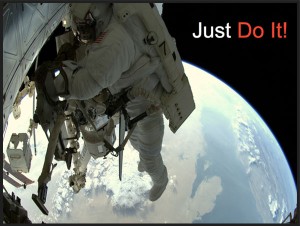 Ron on a spacewalk during the STS-124 mission

So please take this as a Call to action.

Dialog is great but we need action – positive, disruptive action – action that leads to exponential good, to exponential progress toward solutions to the challenges we face. We need to stop thinking linearly and embrace exponential change – change that comes from being open to innovative partnerships, and solutions. This is true innovation.

How To Do Well & Do Good: Interviewing a Misfit Entrepreneur and Media Mogul

How To Do Well & Do Good: Interviewing a Misfit Entrepreneur and Media Mogul