Investing in Energy Efficiency Pays Off

A junior and senior economist are walking down the street. The junior one spots a $20 bill on the ground and says, “Hey, look, 20 dollars! Should I pick it up?” The senior economist replies: “Don’t bother. It can’t be real. If it were, someone would have taken it already.”

Retrofitting buildings for energy conservation in the United States could save $1 trillion over a decade, reduce American greenhouse gas emissions by 10 percent, and spur employment across the country.

The idea that money is available for the taking defies economic logic. But sometimes it’s true. That’s the case with a vast opportunity that’s routinely overlooked by institutions across the country—from universities to hospitals, companies to governments.

The opportunity is investing in energy efficiency. “The returns are tremendous, and there’s virtually no risk,” said Mark Orlowski, the founder and executive director of the Sustainable Endowments Institute, an organization that is building a network to advance research, education and practical tools to help institutions, primarily universities and colleges, make investments that mitigate climate change.

The idea that money is available for the taking defies economic logic. But sometimes it’s true. Tweet This Quote

Consider the example of Burton D. Morgan Hall, a 48,000-square-foot building completed in 2003 on the campus of Denison University in Granville, Ohio. Even though it’s only a decade old, energy conservation technologies have advanced so rapidly in recent years that significant savings were possible. In 2012, Jeremy King, Denison’s sustainability coordinator, explained, the college invested about $108,000 to install new sensor-controlled heating and cooling systems and energy efficient lighting throughout the facility. The combined savings from reduced gas and electric bills have remained roughly $28,000 per year, the initial estimate. (The rate for natural gas has gone down but electricity prices have increased.)

That’s less than a four-year payback. For investments in energy efficiency, it’s not an unusual return. And it’s low risk: unless the building is destroyed or the usage patterns change markedly—the energy savings will continue long after the principal is recovered.

Nationally, the potential savings from energy conservation investments are astounding. In a 2012 study, Deutsche Bank and the Rockefeller Foundation found that retrofitting buildings for energy conservation in the United States could save $1 trillion over a decade, reduce American greenhouse gas emissions by 10 percent, and spur employment across the country.

The opportunity is investing in energy efficiency. ‘The returns are tremendous, and there’s virtually no risk’ Tweet This Quote

To be sure, retrofitting at the national level would require huge efforts of mobilization. But at the level of a single university or government agency, the opportunities are more straightforward. So why do institutions regularly overlook them?

One problem, says Orlowski, is disbelief. Like the economist above, if something seems too good to be true, we assume it is. Indeed, energy savings can be difficult to measure and verify (although there are reliable methods for estimation).

But a bigger problem is that energy efficiency is mainly thought of as a cost, not a potential windfall. And it can be particularly hard to justify funding for retrofits when budgets for programs are being slashed.

Even when money is available—in cash reserves or endowments—institutional silos get in the way. The individuals who are best positioned to identify potential savings—operations and facilities managers—have little interaction with the people who control resources—finance and investment managers. As a result, fund managers may look far and wide for attractive returns, while failing to recognize market-beating opportunities to invest in their own campuses.

How do you solve this problem? The Sustainable Endowments Institute (S.E.I.) is advancing a workable approach. It provides step-by-step guidance to help universities and colleges (as well as other institutions) establish Green Revolving Funds (G.R.F.s)—funds that treat green projects as investments and reinvest savings. It also provides them with access to a software platform called the Green Revolving Investment Tracking System (Grits) that allows them to track returns, and review the efficiency investments that other colleges have made, too. (Explainer videos here.)

S.E.I. is a small organization that punches above its weight. The Billion Dollar Green Challenge it introduced in 2011 to build momentum for G.R.F.s has brought together institutions that have, to date, committed $110 million to these investment vehicles. The Grits library contains detailed investment information on 350 energy efficiency projects from 75 institutions, viewable by members. (One founding partner of the Green Challenge, Western Michigan University, has made its project information publicly available in summary and detailed reports.)

Nationally, the potential savings from energy conservation investments are astounding. Tweet This Quote

Denison University was an early partner in the Billion Dollar Green Challenge. “We signed the American College and University Presidents’ Climate Commitment in 2010 and we have a goal of carbon neutrality by 2030,” Jeremy King, the university’s sustainability coordinator, explained.

In 2011, Denison committed to creating a $1 million green revolving fund. Since then, the university has put $1.8 million into it and invested in 60 efficiency projects. King reports that Denison’s energy consumption per square foot of building space has dropped by 13.5 percent since 2008.

“It’s relatively easy to set up the fund,” King added. “But it’s not always easy for people to put two and two together and redirect the savings back into it.” This can be a tricky sell when utility bills go up, or colleges add buildings, and you have to explain that the savings is avoiding what would have been a higher bill.

To make the fund work, therefore, it’s important to create a common frame of reference. The first step is to form a working group that includes representatives knowledgeable about finance and facilities with faculty, students and sustainability officers. S.E.I. provides templates to guide the process: how to organize the group, write the fund’s charter, and establish its operating and investment guidelines.

At Denison, leadership came from the vice president of finance, Seth H. Patton. “He got it and insisted that savings from efficiencies flow back into the fund until the cost was repaid,” said King. Additional savings would reduce the general operating budget.

Last year, Denison decided to increase its revolving fund—the Green Hill Fund—to $3 million. “We are choosing projects that have an average payback of six years or less, so in any given year we’ll have $500,000 to invest in energy efficiency independent of the operating budget,” said King.

Another partner in the Billion Dollar Green Challenge, the University of New Hampshire, capitalized its G.R.F. with funding for efficiency projects that the state government offered from the Obama administration’s stimulus package. “We said, if you give us the seed money, not only will we get to work right away, but we’ll continue this work for years and years,” said Matthew O’Keefe, the university’s director of energy and utilities.

The school started with $600,000 in the fund. In five years, it has generated $1.3 million in energy savings, allowing the original sum to be reinvested in energy saving projects that have cost $1.8 million over all.

Some of the investments were no-brainers; others provide longer returns. For instance, the school insulated sections of its three miles of underground piping, an investment that pays for itself in just two years. “In one of our science buildings, we spent about $100,000 on ‘demand control ventilation’ and saved that in just over a year,” he added. They installed a solar preheat ventilation system—an air chamber attached to an exterior wall with a black surface. The air is drawn in slowly through small holes, heated by the sun, and used for ventilation (a 10-year payback). 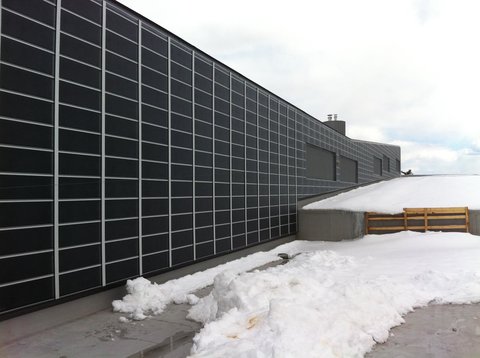 “You have a great bang for the buck if you can just get the money to invest in it. It’s really important to have a separate funding mechanism,” said O’Keefe. “We think that over 10 years, we will have saved $3 million with no other external injections of capital.”

When Elizabeth Kiss, president of Agnes Scott College, in Decatur, Georgia, heard about the Billion Dollar Green Challenge, she decided to establish a G.R.F., and reached out to college donors to finance it. Kiss was surprised when the first grant came from a patron who was skeptical of the environmental movement and climate change. What attracted him, she said, was the efficiency argument and the prospect of saving money for the college’s core mission.

To design the fund, the school’s director of sustainability, Susan Kidd, worked with financial officers, faculty and students. Peyton Nalley, who was then a sophomore, developed the processing form needed for project approval and funds transfer. Working on the G.R.F. gave Nalley a practical connection to ethical concerns raised in her courses, she said. “In economics, we’re looking at property and discrimination,” she said. “And huge power plants are always located in poor areas.”

People say, ‘We’re overloaded and this isn’t a fire that needs to be put out now.’ But if they actually did an energy audit, they would find millions of dollars in savings Tweet This Quote

One of the most active institutions using Grits today is Western Michigan University, which established its first G.R.F. in 1980, and has contributed data on 60 projects. “One benefit of a revolving fund is that it enables engineers to become entrepreneurs,” said Peter J. Strazdas, the school’s associate vice president for facilities management and president-elect of the national industry association known as APPA: Leadership in Educational Facilities. “What kills people is when they have an idea and you talk about it but nothing happens,” he added. But when engineers or mechanics know funding for ideas exists, they take initiative. “I’ve got 500 employees in facilities, and they’re the ones coming up with project ideas and making them happen,” he said. “I’m a cheerleader.”

This month, S.E.I. formed a partnership with the two largest higher education networks that prioritize energy efficiency: the American College and University Presidents’ Climate Commitment and APPA. “We’ll be rolling out Grits on a pilot basis to approximately 100 additional universities by the end of February,” said Orlowski. One priority will be providing access to institutions that serve predominately minority students. (Grits is available for a free trial to any nonprofit institution.)

It’s a big moment for a small organization. It could open doors to 2,000 institutions. But Orlowski knows that the path ahead won’t be downhill. Although no one is refusing to consider the idea, he explained, “People say, ‘We’re overloaded and this isn’t a fire that needs to be put out now.’ But if they actually did an energy audit, they would find millions of dollars in savings—and that money could be used for all sorts of things: scholarships, new faculty positions, even more pay for the university president.”

How Mexican Prisoners & Artisans Gave This Startup A Competitive Edge

How Mexican Prisoners & Artisans Gave This Startup A Competitive Edge

David is co-founder of the Solutions Journalism Network and writes a column for the New York Times called Fixes with Tina Rosenberg. He is the author of "How to Change the World," and “The Price of a Dream: The Story of the Grameen Bank,” and is co-author of “Social Entrepreneurship: What Everyone Needs to Know.”