First, a quick look at how we did this year, in graphs! These come from a 68-question survey that our entrepreneurs completed at the end of the Institute. (1 = poor or very unlikely; 5 = excellent or extremely likely. 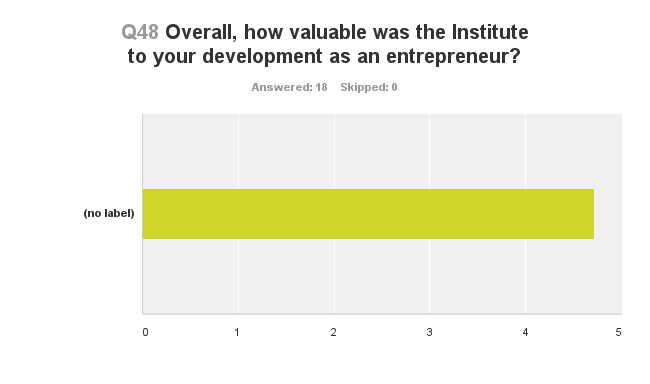 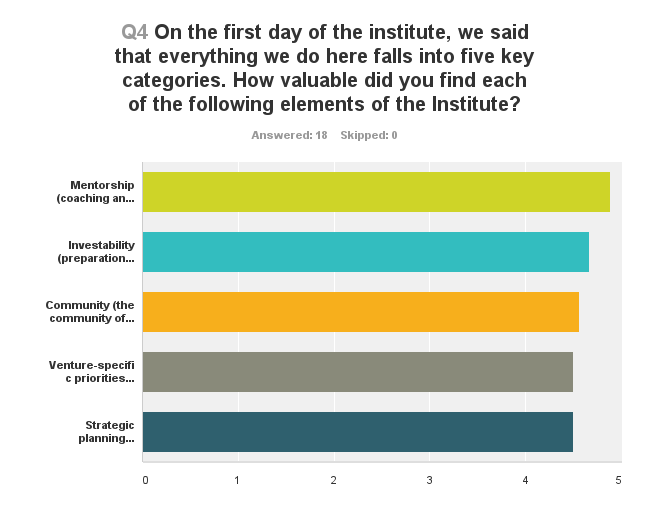 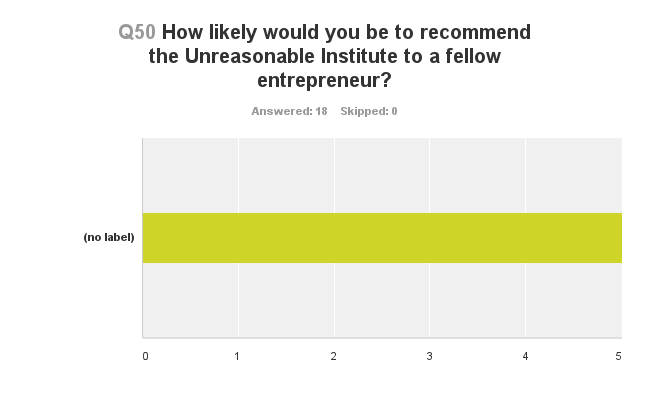 While there are definitely some things we can improve upon, I am extremely proud of the Unreasonable team for pulling off such an incredible Institute this year!

1. The entrepreneur should be in the driver’s seat. We’ve been hearing for years that some of our entrepreneurs simply don’t follow up with mentors and funders they meet at the Institute. We found this bewildering. So after considering feedback from previous mentors and entrepreneurs, we made the following changes:

These efforts, simple as they may be, seem to have worked. Mentors told us they had never seen a batch of our entrepreneurs so good at following up. And the entrepreneurs appreciated the extra effort we put into framing and told us they wanted even more.

2. Curation trumps serendipity: Why we’ll change some of our community events and end others. We carefully curate our mentor and funder networks and match relevant people to the entrepreneurs during the Institute. But to protect against the fact that we can’t possibly know everyone who might be valuable to an entrepreneur, we host two events that we are open to anyone who wants to buy a ticket: the Unreasonable Launchpad (formerly the Climax) and the Unreasonable Scrimmage. The Launchpad was open to the public and welcomed nearly 800 attendants who came to hear the entrepreneurs’ six-minute talks. The Scrimmage was a chance for the entrepreneurs to work with skilled professionals in the Boulder Community on specific problems in their venture.

This year’s entrepreneurs told us that these were our least helpful events. Some felt that they did more for Unreasonable Institute than for themselves. They posited the reason for this was that “the right people weren’t in the room,” leading to little benefit, especially considering the work they put in. 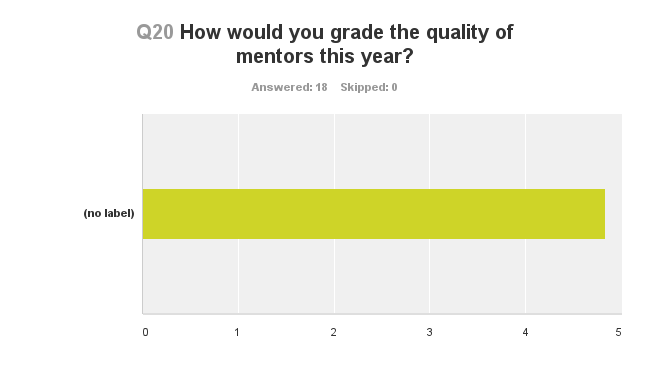 Moving into 2015, if we do events like the Launchpad and the Scrimmage, we will likely aim for smaller, more tightly curated events. In some ways, this is sad for us, because the community in Boulder so loves the Unreasonable Launchpad. However, we are here to serve the entrepreneurs, and this event just doesn’t produce enough value for them.

3. Bringing 30 mentors to the Institute in one weekend works! For the second year, we hosted “Mentor Weekend.” This took place two weeks into the Institute, right after the Launchpad, and brought the bulk of our mentors to the Institute. They participated in speed dating as well as deeper one-on-one sessions with our entrepreneurs and forged a lot of strong relationships. This was much better organized and attended than last year’s event, making us confident in this structure moving forward. Its effectiveness may also give us the ability to shorten the Institute a bit, making it accessible for more entrepreneurs.

4. Mentor teams are better than mentor relationships. We’ve evolved from an organization that matches entrepreneurs with mentors to one that helps each venture build a tailored, well-rounded mentor team. Wherever the entrepreneur needs support, we try to assemble a team of two to four dedicated mentors with skills that address the gaps in the founders’ experience. This team commits to working with the entrepreneur for a minimum of six months before a re-evaluation.

Mentors are more motivated when they know the context in which their expertise fits. And the team format creates a sort of “coopetition,” as the mentors all want to add at least as much value as their peers, if not more.

5. Mentorship needs to localize. We also noted that ventures whose mentor teams had large contingents of local mentors were stronger, as they were able to hold more regular meetings. Moving forward, we plan to dramatically increase the proportion of local mentors in our mentor pool. This learning also validates the model of our Institutes in Uganda and Mexico (which will consist more heavily of local mentors).

6. The middle of  the Institute is not the best time for entrepreneurs to raise funding. We usually run an investor event as part of each year’s program. But this year we decided to detach this event from the Institute and schedule it for three months later.

The main reason for this decision is that we think our entrepreneurs need time to deconstruct before they reconstruct. During the Institute, mentors poke holes in the entrepreneurs’ core assumptions. Our Financial Architects (who are offering a new service to entrepreneurs this year in helping build their financial models) tear apart financial models. Our Capital Partners (funders who also serve as mentors) perform “funding reality checks” for our entrepreneurs and show them how far away they are from being considered investable.

This is clearly not the best time for an entrepreneur to meet with investors. Indeed, few of our past ventures have secured capital during this step. (Though the vast majority did a few months later.) So we’ve decided to offer them support as they reconstruct, then host Investor Days in October, three months after the close of the Institute. We’ll bring in 100 carefully chosen funders, using the remarkable database that our venture funding lead Tyler Hartung built, along with Philip Berber.

7. We need to distribute power rather than consolidate it. Given how much meticulous one-on-one matchmaking goes into creating an Institute experience that is valuable for the entrepreneurs, we suspect that we often get in the way of thousands of potential relationships. Over the past few years, we’ve seen how effective the matchmaking can be if we share responsibility for it. A great example is the Unreasonable Coaching program, led by the amazing Renée Freedman. Renée has built a remarkable network of trained and experienced executive coaches, whom she matches to our entrepreneurs after understanding their needs. It’s one of the most highly lauded parts of Unreasonable Institute!

Thanks to Renée, our entrepreneurs have access to a whole new network of support. Traditionally, we have relied on only one person to build our mentor network and another person to build the funding network. Moving forward, we plan to empower multiple people—from inside and outside the organization—to help us recruit and match mentors and funders, as well as accountants, lawyers, designer, and others who have the skills our entrepreneurs need.

8. We can make a much bigger difference with earlier-stage organizations. The average 2014 Unreasonable Venture was much earlier stage than last year’s. And the success of the 2014 class validates our assumption that we’re better suited to earlier-stage ventures.

Over the past few years, we’ve experimented by working with ventures at different stages. In 2010, we took idea-stage ventures. In 2013, we took profitable operations with strong evidence of their impact. 2011 and 2012 represented gradients in between these extremes. While nearly all ventures found value in the Institute, the entrepreneurs who have found it to be an absoulte gamechanger were those at the prototype or early-revenue stages (roughly the kind of venture we accepted in 2011).

Part of the reason that we pushed later stage in past years was that funders in our space tend to seek more traction and evidence before they’re willing to invest. But our 2011 ventures raised more money on average than our 2013 ventures, despite being earlier stage. Yes, they have had more time to raise money since the Institute, but most of the 2013 ventures were about two years ahead of 2011 ventures.

Funding aside, the ventures that have grown the most coming out of the Institute arrived at the institute at a very early stage—in many cases pre-revenue.

Role of the Entrepreneur: The entrepreneur needs to be in the driver’s seat and must master the art of building deep and authentic relationships with mentors and funders.

Roles of the Institute:

We can’t wait to apply these lessons!

1. [Of the two that didn’t build a team, one team didn’t speak English well enough to cement relationships. We need to be stricter about this criteria moving forward. The other turned out not to be sufficiently coachable.]?

2. [You’ll notice that the 2013 Class had less than half the number of ventures in the 2011 Class. We made the decision to accept fewer ventures to the Institute per year in order to more deeply customize the program to our entrepreneurs and to invite teams (rather than simply one leader per venture). However, having honed our methodology for curating the right mentors and funders for our ventures over the past two years, we believe we can work with more ventures per Insitutte and plan to design our 2015 Institute with a larger class size in mind.]?

His Competitive Advantage? Employees With Autism

His Competitive Advantage? Employees With Autism