The following is the final excerpt in a three-part series from one chapter in The Unfinished Social Entrepreneur, a book that provides 21 useful essays about what it takes to build a career as an impactful entrepreneur, plus additional commentaries from several entrepreneurs.

OMS Shoes pioneered and popularized the buy-one-give-one corporate cause marketing model. For every pair of shoes that you and I buy, the company donates a pair of shoes to a shoeless child in the developing world. Copycat social enterprises are metastasizing: eyewear, toothbrushes, baby clothes, bicycles, soccer balls, fruit snacks, jewelry, purses, coffee, blankets, lamps, hammocks, and children’s rain boots. Clearly, the buy-one-give-one model is here to stay.

TOMS Shoes has left a sizable, albeit muddied, footprint on the American psyche. “When asked, almost one in three Americans can’t name a single socially-responsible organization. But, the people who can [name one] cite TOMS Shoes, Whole Foods, and Microsoft most often—even ahead of nonprofits like the American Red Cross and The Salvation Army,” reports Ariel Schwartz in ‘Americans Think TOMS and Whole Foods are the Most Socially Responsible Companies, Sort Of’.

“On college campuses,” blogs Johnathan Favini, a student at Lafayette College, “just about every twenty-something knows the name. You can spot TOMS Shoes on college campuses across the country, often sported by young, socially-minded students. The buy-one-give-one promise captures the hearts of the young idealistic demographic quite well, satisfying its two greatest cravings simultaneously: one, the desire to feel a part of change…and two, the desire to look cool.” 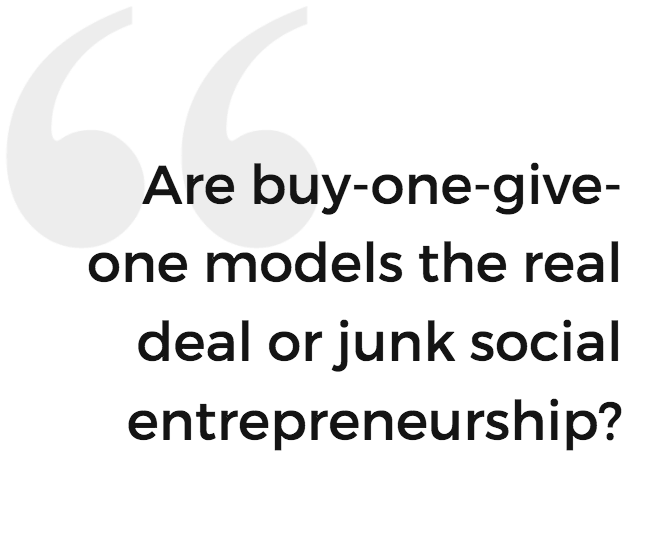 To get to the foot of the matter, are buy-one-give-one models the real deal or junk social entrepreneurship? After all, even a company claiming a ‘soleful’ purpose might be shoe-washing. If I’m wearing a pair of TOMS Shoes, am I walking the talk? It’s complicated, because there are three aspects to the buy-one-give-one model for us to unpack:

First, is it a sustainable and ethical revenue model for social entrepreneurs to emulate? Yes, is my cautious answer. By all accounts, TOMS Shoes is a cause marketing success. According to the company, it has distributed 10 million pairs of free shoes. To manufacture a pair of canvas shoes costs approximately $5 or less (according to experts), so that means that this one social venture, if you choose to call it that, has generated $50 million of shoe-charity for the developing world. On its face, that’s a good amount of money.

As a matter of policy, however, you and I might question the wisdom of spending our way to social justice. The implicit appealing (and appalling) message of the buy-one-give-one model is that economic development can be bought on the cheap. Still, as an ardent shopper, I find the prospect rather enticing. If shoes, why not shovels, shirts, shorts, shampoo, soap, spoons, saws or scissors? In that respect, buy-one-give-one doesn’t fundamentally differ from any other corporate social responsibility program or consumer-facing business charity. It’s shop ‘til you drop meets be the change. TOMS’ message is not all that distinct from a charity that tells potential donors that it can save the world, or at least a child’s life, for a few pennies a day. A world with great misery offers opportunities for great hype.

Second, as conscious consumers, is the buy-one-give-one model a prudent way for us to support social change? Not really.

As social entrepreneurs concerned about the cost-effective use of our money, the buy-one-give-one approach ranks pretty low on the dollars-reaching-recipients efficiency-meter. Let’s compare a buy-one-give-one model with a run-of-the-mill, nonprofit (hypothetical) charity. We’ll take TOMS Shoes versus Tanya Teachers. I spend $50 with each organization—in one case, making a donation; in the other, buying a pair of canvas shoes (the ‘classic’ retails in that price range).

Let’s assume that both organizations have overhead costs totaling a whopping 30 percent of total revenues, thus, leaving $35 after my donation or shoe purchase for other expenditures.

Let’s also say that Tanya Teachers sends me a crummy $5 coffee mug as a thank-you gift. That leaves $30 for training and paying teachers, plus hot dogs for the staff party.

By comparison, TOMS spends $5 manufacturing one pair of shoes for me, and another $5 to make a pair of shoes to send a poor kid. That leaves $25 for profits.

Obviously, these numbers are pure guesswork, but the conclusion is pretty clear: a direct donation to a cause I care about is the more cost effective way to go. In our little example: For the same $50 out of pocket, Tanya Teachers generates $30 for teaching, versus $5 of shoe charity from TOMS.

Parenthetically, if I happen to buy a more expensive pair of TOMS shoes, the charitable benefit is still only one pair of shoes donated, whereas increasing my donation to Tanya Teachers has a commensurate ‘do good’ benefit.

Finally, my donation to Tanya Teachers is tax-deductible. Shoe purchases are not.

Of course, if either of us was planning to buy a pair of canvas shoes anyway, a pair of TOMS shoes might do a bit of good in the world. We simply need to be honest with ourselves: shoe-shopping is what it is, and it isn’t smart philanthropy.

Third, is the buy-one-give-one model, at least as executed by TOMS Shoes, a sensible, impactful economic development model to copy? Not even close.

As reported on the company website, “In 2006, TOMS Founder Blake Mycoskie befriended children in a village in Argentina and saw that they didn’t have adequate shoes to protect their feet. Wanting to help, he created TOMS Shoes, a company that would match every pair of shoes purchased with a pair of new shoes for a child in need.”

Imagine, if you will, showing up one day in an economically-depressed village. Subsistence farming is the town’s principal employment. We note the absence of electrical lines. Women, still fully dressed for modesty, are bathing in a nearby stream. Young girls use flat stones as washboards. Unemployed men huddle in small groups. An old church doubles as the health clinic. At the end of town, feral pigs feed in an open garbage dump. A small school, staffed by one teacher, lacks sufficient books. We hear songs and laughter. Boys and girls flirt. Babies cry. Meals are cooked. Life has meaning. Taking this all in, you or I decide the most pressing priority is free shoes for barefoot children. Really?

If TOMS’ CEO, at the time of his shoe epiphany, had looked into what poor children require to realize promising lives, he might have come up with a buy-one-give-one business plan for TOMS Health Care, TOMS Jobs, TOMS School Books or TOMS Who-Knows-What. Of course, you and I don’t know what he might have learned. More to the point, neither does he.

As social entrepreneurs, you and I reject the wheezing argument that ‘anything is better than nothing’. We also dismiss the cringe-worthy implication that the shoeless poor are helpless and, therefore, whatever we in the West dole out is ‘at least better than nothing’. No one wants the economic development bar set so low that, one day in the future, we might be shopping for the best in TOMS Shoelaces.

TOMS Shoes is the oldest form of altruism known to humankind: alms for the poor. In economic development terms, TOMS Shoes is product dumping with a heart. Dumping is the predatory practice of exporting a product or commodity into another country at a price below its cost of production. Even cutthroat corporations consider this an unsavory business practice, and seek government protection against it. When TOMS walks into a village, local leaders focused on economic opportunity are wise to worry about their local shoemakers and cobblers. ‘Free’ is a difficult price point to undersell.

“Charitable gifts from abroad can distort developing markets and undermine local businesses by creating an entirely unsustainable aid-based economy,” writes Cheryl Davenport in ‘The Broken ‘Buy-One, Give-One’ Model: 3 Ways To Save TOMS Shoes’. “By undercutting local prices, Western donations often hurt the farmers, workers, traders, and sellers whose success is critical to lifting entire communities out of poverty. That means every free shoe donated actually works against the long-term development goals of the communities we are trying to help. TOMS isn’t designed to build the economies of developing countries. It’s designed to make western consumers feel good.”

Contemplate this hypothetical: according to the National Center for Children in Poverty, “more than 16 million children in the United States (22 percent of all children) live in families with incomes below the federal poverty level—$23,550 a year for a family of four.” Undoubtedly, some of those children need new shoes. If a Chinese shoe company implemented a buy-one-give-one program, Chinese volunteers would soon be landing at American airports, then fanning out into inner cities and poor rural communities to give away free shoes to American kids. American shoe manufacturers, retailers and repair shops would explode in jingoistic protest.

Our rejection of the TOMS Shoes giveaway program is compounded by the way the program presents itself to the general public. Characteristically, the TOMS Shoes CEO is pictured on bent knee fitting new shoes on the feet of grinning brown, black or yellow children, imagery reminiscent of the Pope washing feet on Holy Thursday. TOMS’ optics are reminiscent of the white, Western savior. It’s a paternalistic narrative that informed social entrepreneurs religiously avoid.

Worse, when interviewed for the Australian magazine Dumbo Feather, the company CEO revealed an insulting ignorance about the nonprofit sector. In ‘Blake Mycoskie is the Chief Shoegiver’ he says, “when people look at charities sometimes they see huge percentages going towards overheads and the CEO’s high salary, and it’s off-putting… We’re a business and hopefully we’re going to be a really big business and make lots of money, but in the process we’re going to help lots of people.” Is it churlish to note that TOMS Shoes (privately-owned before its sale to Bain Capital for $625 million) doesn’t publish its ‘overheads and the CEO’s high salary’? In stark contrast to nonprofits which are legally-obligated to be transparent, you and I were not given a shred of information about the company’s operational efficiency.

We only know that TOMS’ profits are symbiotically laced together with welfare shoes for poor kids: no free shoes, no motivated customers. When life’s essential products and services (like health care, education, decent roads, clean water) depend on vagaries of American consumer purchasing patterns, it seems like the opposite of committed social change.

Perhaps the buy-one-give-one model makes sense for products that are unimportant, or at least less important. Perhaps the TOMS buy-one-give-one model seems reasonable to us because, in the final analysis, shoelessness is a comparatively trivial part of the poverty puzzle—a symptom of economic injustice, not its root cause. Anyone who says otherwise probably owns stock in a shoe company.

Google, Silicon Valley Must Do More to Hire Female Engineers

Google, Silicon Valley Must Do More to Hire Female Engineers

Jonathan C. Lewis is a life-long social justice activist and social entrepreneur. He is the Founder of MCE Social Capital, an innovative social venture that leverages $110 million of private capital to finance tiny business loans to deeply impoverished people, mostly women, in 33 countries in the developing world. Jonathan is also Founder and President of the Opportunity Collaboration, an annual strategic business retreat for 450 senior level anti-poverty leaders from around the globe. In addition, Jonathan is the co-founder of Copia Global, an Amazon-like consumer catalog serving the base of the economic pyramid in Kenya. Jonathan has taught social entrepreneurship at New York University, the University of California (Berkeley) and lectured at universities around the world. He is a recipient of the Social Venture Network Innovation Award and a regular HuffPost Contributor.