Modern Energy Could Mean the Difference Between Peace and Unrest

hen we think about the things we take for granted, one of the most common is access to basic energy. Turning on a lamp so you can teach your children how to read, watching the evening news, or working into the night on your computer are all basic acts that most of us don’t even consider to be a privilege. Over 500 million people have a mobile phone without a place to charge it at home – a basic convenience needed to conduct commerce.

For 1.2 billion people around the world, though, basic energy has been provided by subsidized kerosene or the deforestation of the world around them. Even though we still have a lot of work to do to reach this population, energy – especially renewables – continues to attract more attention and spark debate on the global political stage. 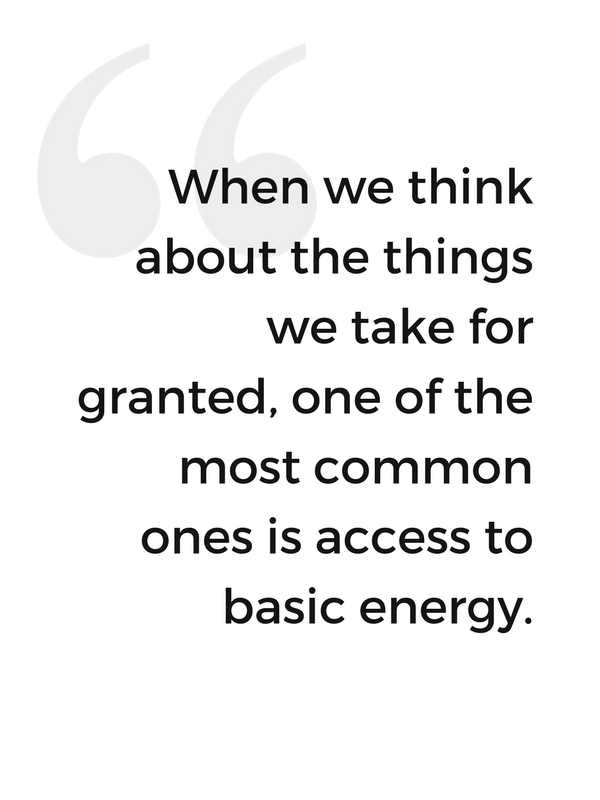 One of the 17 Sustainable Development Goals developed by the United Nations in 2015 is dedicated to ensuring “access to affordable, reliable, sustainable and modern energy for all” by 2030; it also specifically aims to “increase substantially the share of renewable energy in the global energy mix.”

From the UN’s perspective, reaching a basic level of electricity is essential to meeting the other Sustainable Development Goals. In fact, the cost of providing a basic solar lantern has gotten so cheap that the global kerosene subsidy budget alone could provide every family basic electricity by 2020. Turns out that solar is the easiest and most affordable to provide. The good news is we have the technology we need to make a massive dent in this problem; we just have to bypass the kerosene subsidy proponents to reach scale.

Basic electricity has been shown to increase household income, improve household health, increase child development, and start people on the pathway to prosperity. Despite these findings, many people have argued that modern electricity was defined by a connection to a traditional coal-powered electric grid. Even more bold, these voices have suggested that anything short of modern electricity would not be worth pursuing. What a lot of us are saying is that basic electrification is worth pursuing as its own end.

Since the Millennium Development Goals were issued back in 2000, over 85 million people are now being served by basic solar electricity. Companies like d.light, M-KOPA, and Mobisol are serving more people than many centralized grid operators.

If we start with solar lanterns, for example, I believe we can get at least one in the hands of every off-grid family in the world by 2020 — for less than the cost of annual kerosene subsidies. People will argue with me and say that lanterns don’t equate to modern electricity, but if we provide basic electricity we will see household incomes rise and health impacts from smoke inhalation improve. Companies like the ones mentioned above will be able to help their customers add more solar electricity using solar home systems, microgrids and more.

This isn’t just modern electricity – it’s the future of energy.

The Risk of Failing

Even though over one billion people still lack access to electricity, mobile phones make them aware that the technology exists to fix it. All people want electricity. What many see today is a government that doesn’t care enough to prioritize the effort to solve it. The worst risk we can take is failing to provide basic services to the general population. We’re already seeing high levels of social unrest in many areas of the world, and that’s only going to increase.

Consider cell phones, which have become nearly ubiquitous. People pre-pay for minutes. They need their phones to function because they have to sell goods, check weather patterns for their crops, or communicate with their families. But if the phone dies, it doesn’t matter how much credit they purchased – it won’t work because it’s not charged.

Solar lanterns sales are today often led by the need to charge cell phone, with the lighting benefit as an added service. In fact, some are buying solar lanterns and charging multiple phone to create a sustainable revenue stream. In fact, mobile phone companies helping to solve this problem because if their customers can keep their phones in use, they will theoretically purchase more minutes.

But will this be fast enough to alleviate frustration? It is up to those people fighting for modern energy that are blocking prioritization of this important effort. Basically, if we don’t make progress on this goal, we stand to swap social cohesion and well-being for civil unrest.

Beyond providing solutions for electricity, our goal has to be to increase the productivity of a family, such that they can make more income.

A charged cell phone accomplishes this, as it enables business to occur more efficiently. Having electricity prevents women and girls from spending four hours a day foraging for wood to cook meals and light homes. Instead, they can spend that extra time making products to sell and generate money for the family. 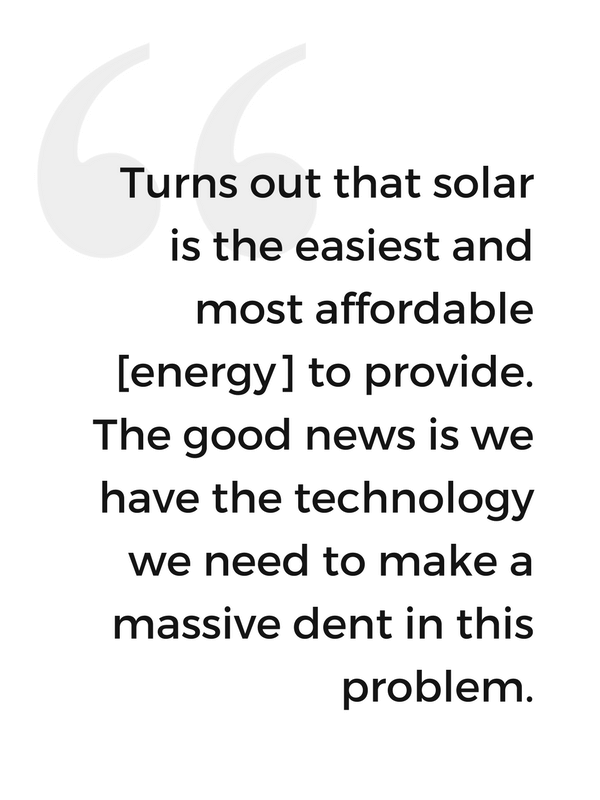 A USAID study found that access to electricity increases household income by 44 percent. If women are able to work, you move from a one income household to a two income household. The potential for improved well-being multiplies.

I believe we’re already on the right trajectory, but governments have to want this to happen. When Prime Minister Modi of India came into power, he made it clear that he wanted everyone to access modern electricity by the end of this decade.

If more presidents or prime ministers like Modi simply said they wanted access to energy for all by 2030, then it would happen – even if they didn’t allocate any money. The technology is ready but attention and pressure on large utility and telecom companies are necessary to make it happen.

Since the end of World War II, there’s been this shared belief that we can collectively solve the world’s biggest problems. We’ve made tremendous progress, but the Sustainable Development Goals show that there is more to do. For example, the total number of people living in poverty is nearly the same as it was back then.

The SDGs represent the final frontier of the grand experiment that was post-WWII reconstruction. It’s time for us to come together as a global community and actually accomplish all 17 of these Global Goals.

Part of this means prioritizing the 1.2 billion people without access to electricity, especially the populations in places where we’re seeing civil unrest and unmet social needs. The West needs to redouble our efforts to support these governments in providing sufficient social services.

The technology is here, and it’s ready. The political willpower has to be there, too.