In 1823, Scottish con-man Gregor MacGregor successfully generated over £200,000 in investment and recruited over 200 settlers to a fictitious country he dubbed Poyais (situated in modern day Honduras). The scheme made MacGregor a multi-millionaire by today’s standards.

The key to MacGregor’s success? Artful salesmanship. MacGregor had fake maps and deeds drawn up. He created a fake currency and natural history of the country. He also gave out bogus appointments and titles like “shoemaker to the princess of Poyais” and “Grand Cazique (Prince) of Poyais,” which he humbly reserved for himself.

To further support his cause, he released a book entitled “Sketch of the Mosquito Shore, including the Territory of Poyais,” which boasted that the country had lush natural resources (including gold, silver, and fertile soils) as well as civil infrastructure. In reality, the territory was part of an uninhabitable jungle with four run-down buildings.

Ask yourself: what would a con artist do? Tweet This Quote

While we might dismiss such con men as entrepreneurial blemishes that are part of a “deviant history” we’d rather forget, such tricksters actually have quite a bit to teach entrepreneurs today about hustle, salesmanship, and the art of a pitch. For anyone who has ever struggled to get buy-in or support for their idea — especially those who feel like an underdog in an incumbent sector — let’s take a few tips from confidence men and fraudsters. For if they can generate support and momentum around entirely fictitious schemes, then certainly that can give us all confidence to boldly and creatively pitch our own ventures.

Below I’ve synthesized five practices from con artists that they use to make the unbelievable believable, tips that should be beneficial to anyone running a start-up, trying to sell their ideas internally within an organization, individuals working to build consensus, or social entrepreneurs looking to convince others that another world is possible.

1. Understand the decision-making habits of others.

The art of the con involves thinking through others people’s motivations, needs and ambitions. People almost always fall for a con because they allow themselves to be emotionally roped in.

Ideas only become real when we can visualize them. Tweet This Quote

Don’t discount people’s emotional needs when you pitch. When MacGregor attracted investment and settlers to Poyais, he appealed to people’s deep-felt insecurities and economic ambitions. He played on Scottish national pride — specifically, the fact that Scotland was without a colony like many other European powers at the time. Lastly, understanding the psychology of others also means being a good listener and making people feel unique and understood.

Ideas only become real when we can visualize them. But too often we depend on Power Point or word of mouth to spread our ideas. Develop creative ways for enrolling people and for inciting their imagination. A prototype is worth one thousand words. An experience is far more meaningful than an elevator pitch. MacGregor had a suite of collateral to make Poyais appear legitimate: a fake currency, natural history, and bogus positions and titles. It was these props that bought him trust, support, and helped de-risk the investment. 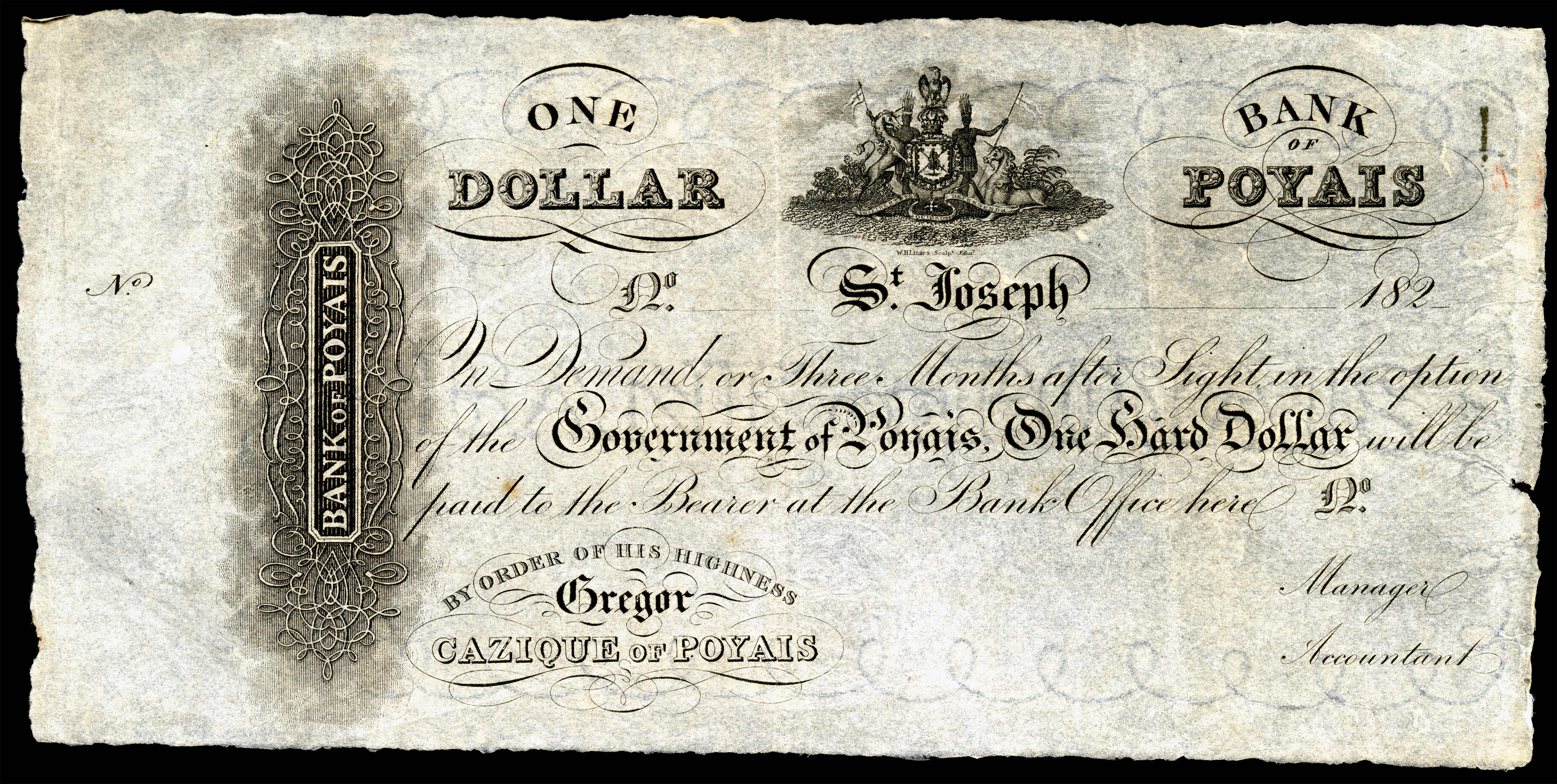 Fake currency that MacGregor drafted for the Bank of Poyais. Photo from Wikimedia Commons.

One intrapreneur I met — a former consultant at Accenture — took a cue from the con-man’s playbook and developed a fake press release about a new business unit he wanted to develop. The idea was to create a not-for-loss consulting division within the company that could focus on the development sector, working in areas where traditionally only aid organizations offered services. Once the press release caught the eye of the company’s chairman, he had his runway to develop the idea.

3. Free ride on others’ legitimacy.

When pitching, signal connections to things that people already know and have a built-in imagination around. It’s no wonder that many start-ups lean on a tried formula of “Zipcar for puppies” or “Grinder for fights” (fictitious examples). Creating a link between established enterprise and something new gives others a metaphorical bridge into your idea. But beyond metaphor, draw in social capital — mentors, communities, partnerships, organizations, universities — that already have established reputations. This allows you to tether your fledgling idea to the legitimacy of others with trusted authority, brand halo, or reputation.

Step into a character or persona that allows you to stand strong in joy, humor, confidence, leadership, and vision. Tweet This Quote

One fraudster confessed that they used to get washed-out celebrities to make commercials for their products in order to make them seem legitimate. For example, Adam West from the 1960s TV show Batman was used on a television advertisement for a scam that sold marked-up Internet kiosks to high traffic areas — like airports and shopping malls. The advertisements falsely promised high revenues for those that installed the computer kiosks.

In 1925, Victor Lustig successfully sold the Eiffel tower as scrap metal. He did so through a variety of tactics, but mostly by cementing his own posh reputation. He brokered the deal at the Hotel de Crillon (a prestigious location), where he invited six scrap metal dealers that he hoped to swindle. Lustig created expensive fake government stationery for him to exchange notes with these potential buyers. Lustig had earned the nickname “the Count” for his polished and suave demeanor. What he knew well was that half the art of pitching is managing your own reputation and understanding how people perceive you.

When pitching, signal connections to things that people already know and have a built-in imagination around. Tweet This Quote

Especially if you’re working within a larger organization, if you get branded as a “misfit,” many of your ideas might be perceived as being peripheral. Take stock of how others see you and then work to dislodge any negative assumptions they might be carrying. Go for a walk with someone to clear up any misunderstandings. Or recruit different personalities around your vision/venture that can offer counterpoints to yourself — and make you less risky as an individual.

Often times con men will assume an alias that makes it easier to pull off their deception. Assuming a false personality or social mask makes it easier for them to jump into a swindling persona. For many of us who might be nervous, under-confident, or anxious about going out on a limb for an idea or pitching something new, it can be helpful to develop an alias as well.

Step into a character or persona that allows you to stand strong in joy, humor, confidence, leadership, and vision. It’s not about cultivating a fake identity, but tapping into the strength of a personality that might reside dormant within you. Create a character sketch of who you want to be when you pitch. Give that character attributes — a secret name even — and wear an outfit that makes you feel connected to that character. Con men and performers do this all the time.

The world certainly doesn’t need more tricksters and con men, but it does need people able to bring good ideas to life. And that might just require a little bit of stealthy behavior. So next time you find yourself sitting on a good idea, ask yourself: what would a con artist do?

How Hundreds of Mexican Homes Save Money and Spare the Environment

How Hundreds of Mexican Homes Save Money and Spare the Environment

Alexa is a researcher, speaker, and social innovation strategist. She is the co-author of The Misfit Economy (Simon & Schuster), a book that examines creativity and innovation on the fringes.