Energy is essential to generate a livelihood and improve quality of life. Over one billion people around the world, though, continue to live without access to electricity, the majority of them in Africa and Asia. According to the World Bank, nearly another three billion people rely on wood or other biomass for cooking and heating, which produces air pollution that causes millions of deaths every year.

Simply put, access to affordable, reliable and clean energy is fundamental for a healthy planet. Founded in 2006, d.light manufactures and distributes solar lighting and power products designed for those who need it most. To date, d.light has sold more than twelve million solar light and power products in 62 countries. Their goal: improve the lives of 100 million people by 2020.

Unreasonable spoke with Founder and Chief Product Officer, Sam Goldman, about building d.light from one janky prototype to a multinational enterprise that at a rate of nearly every second provides solar light to someone, somewhere in the world for the first time. 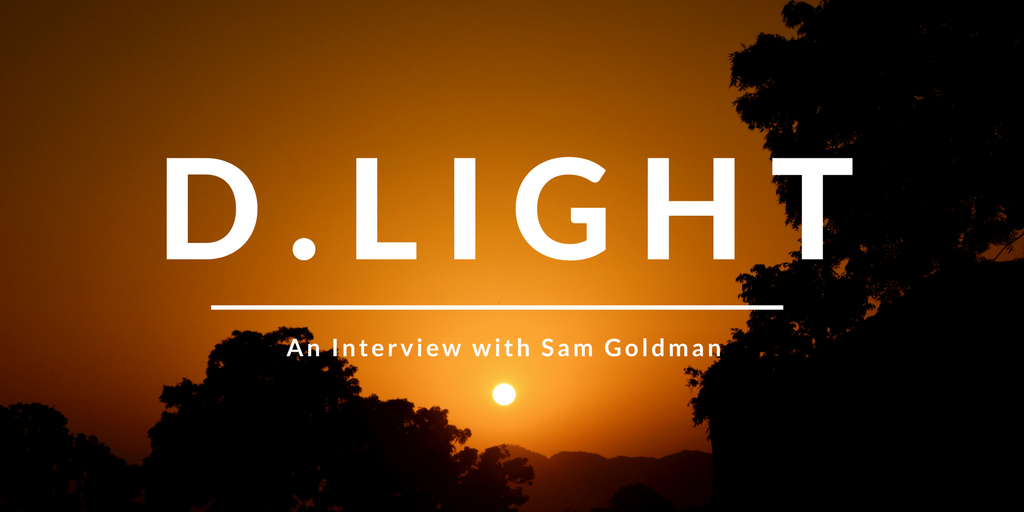 Growing up, was there a pivotal moment that attracted you to environmental problems?

S: No, I don’t think there was one pivotal moment. My hypothesis is that I was living in a lot of big, developing cities like New Delhi, which were incredible, but where rapid development combined with poverty were taking a large toll on the environment. I lived overseas because my parents worked for USAID. My mom worked in health and nutrition, and my dad worked in environment, energy and economics. So my whole world was a development mindset.

But my family vacationed every year on this one island where my grandfather had bought land decades ago that’s actually close to where we live now, in west Canada. It’s so environmentally pristine in British Columbia, where the population pressure is much less and there are relatively more resources to put into environmental protection. So every year, I had the juxtaposition of the degradation rapid population growth and economic development can bring, and then this amazing island with forests and beaches and a population of environmentalists caring for it. So all that came together to create this desire to fix it, mostly centered around, how do we have more equity in the world? How do we have more people rise up to the same standard of living without sacrificing beauty, opportunity and the environment?

What would you say is your personal North Star? Or what problem is most important to you, and why?

S: If I had to boil it down, it’s just climate change. The thing I’m most worried about and the thing I want to work on the most is, how do we make sure that we don’t mess up the world so badly, not only for humans, but for ecosystems – for everything? How do we not – in a very short time – destroy what took hundreds of millions of years to create and was working pretty well before 200 years ago?

I’m really passionate about how we preserve what’s been created and not do irreversible damage. In the process, if we can help as many people and animals and other things as possible, then that’s great. But I really want to do more conservation, and I think climate change is the biggest problem to work on.

How did d.light get its legs, and how was the technology created?

S: I joined the Peace Corps in 2001, mostly because I wanted to understand what it would be like to live as a subsistence farmer. I was an environmental action volunteer, and during that time, I was in a village with no running water, no electricity, no phones, no paved roads, nothing really. Before I finally got hold of an LED lantern, I used a kerosene lantern and really did not like that experience.

How do we make sure that we don’t mess up the world so badly, not only for humans, but for everything? Tweet This Quote

But the real thing that had the massive, massive impact on me was what happened to my next-door neighbor. A young boy had a kerosene fire accident and got third degree burns, head to toe, except for his face. He nearly died. That was what got me researching. It turns out like a million people a year die from kerosene-related fires and burns, and that just got me thinking that this is not some isolated problem of not having electricity in my village; it’s all over the place.

That’s when I started really researching LED lights and thinking about it as a market failure and market opportunity. I decided to abandon biology and environmental studies and go for an MBA instead. Luckily, while I was getting my MBA, I had a chance to work with a group of great people on a class project we called d.light to look at how we would bring affordable, clean, bright light to families who don’t have electricity. 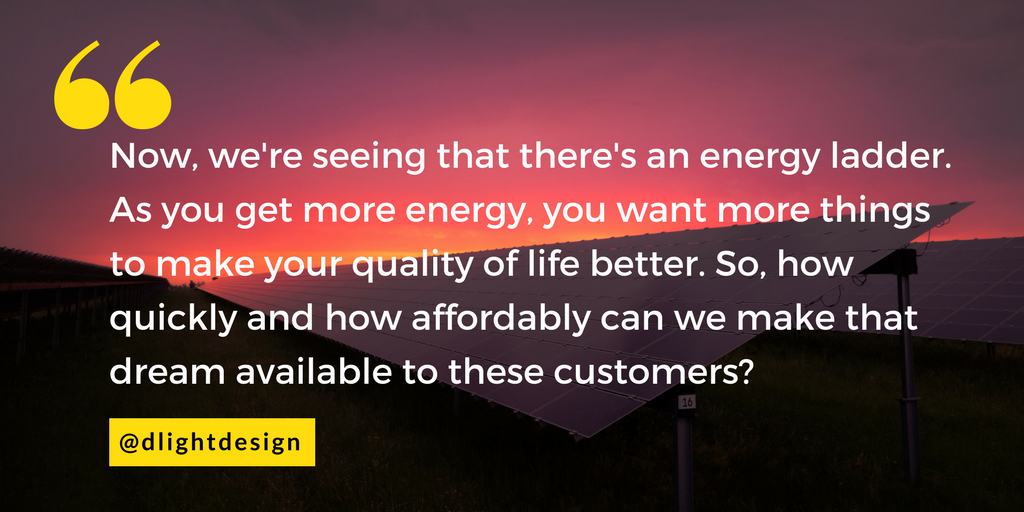 At what point in the development of d.light did you realize it was actually going to work?

S: By the time the class project ended, my co-founder Ned and I begged, borrowed and found money to spend our Christmas in Myanmar in 2006. While there, we saw that if they could afford it, people would get power through these homemade batteries, which is so gross because kids would take lead, melt it down, and then pour it into plates and dump out the acid. Then, every couple days, the kids would carry the batteries on a stick in between their shoulders and walk them to some person who had a really gnarly old Chinese generator, who they would pay to charge up the battery. They would say the more the acid bubbles, the better it’s charging.

We’re not doing it for personal wealth, we’re doing it because we want to make people’s lives better. Tweet This Quote

It was this messed up system, and we realized we could do something awesome here with LED lights. We had this really janky prototype that we gave to this one family. When we came back a couple days later to hear about the experience, the lady – her name was Maya – was crying because this thing had transformed their lives. Her family made mud bricks, and they would wake up at 10 p.m. – the kids too – and go out and set up. There’s no kerosene allowed in Myanmar, so they would burn diesel while they made mud bricks all night long, so that during the day, the sun would bake the bricks. So with the LED light, they didn’t have to pay any money for diesel, they could work really efficiently, and they didn’t have to inhale all the fumes.

So when we came back from that trip with all of the insights, that was when we said we have to work nights and weekends. We found an electrical engineer who was willing to work with us, and we basically said let’s make this thing happen. 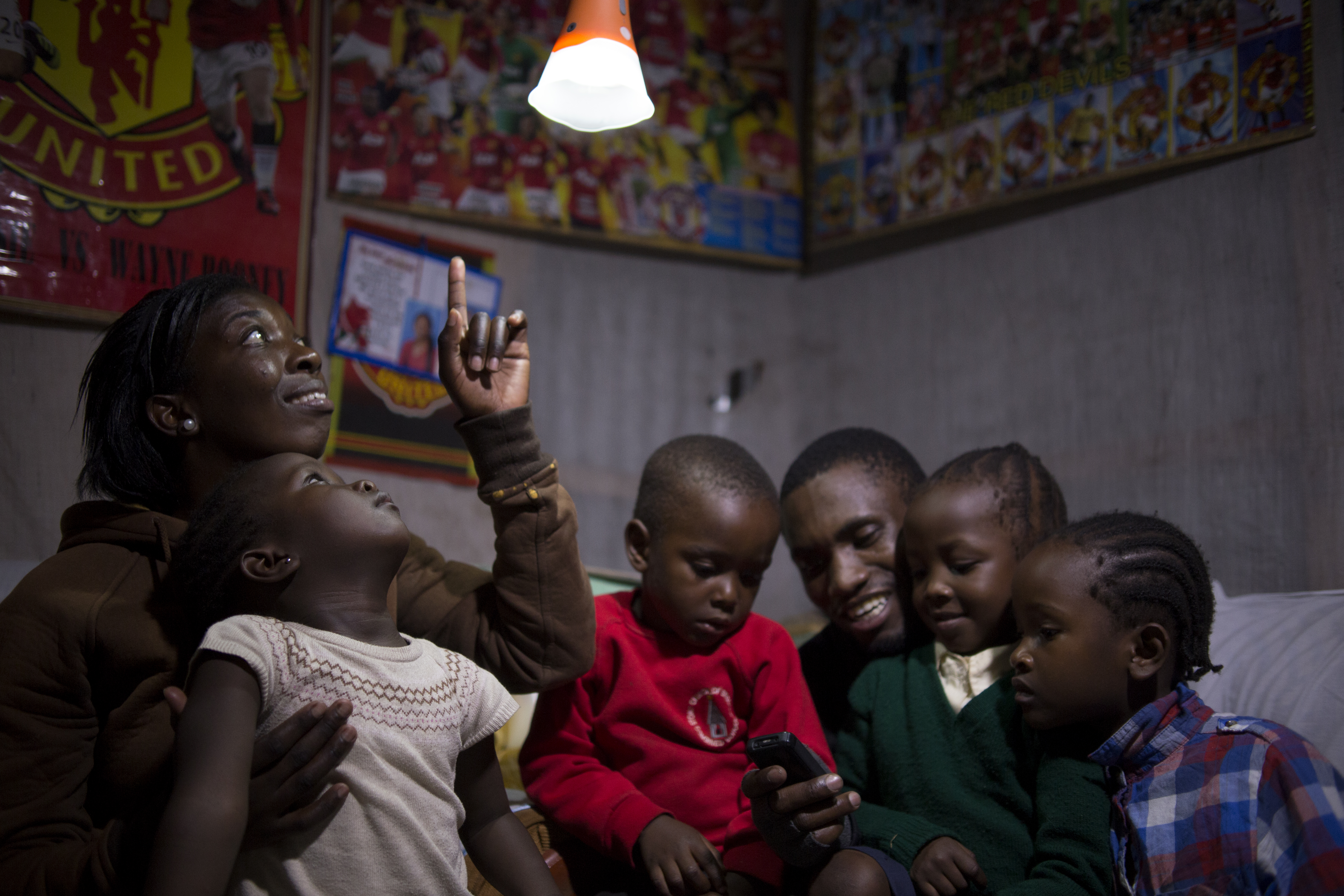 You guys forged the way for a lot of other companies in this space. What does that feel like, being in that position?

S: Well, on the one hand, it’s really awesome. We were also right there when social enterprise generally started to blossom in a major way. When we first started, there were barely any impact funds, there weren’t really any conferences, and there were only a couple schools with maybe one course. Now, it’s relatively huge. So one of my goals in the whole enterprise sector is changing capitalism. A lot of people who worked for us or got inspired by us in one way or another are now doing all kinds of other projects, which has a magnifying impact.

The downside of doing what we’re doing is that when you trail blaze, it’s really expensive and takes a lot of effort from employees and investors. You spend a lot of time and money. Sometimes you get the benefit, sometimes you don’t.

When times get hard, what gets you up in the morning to keep going?

S: We are riding a really big wave, and we got a good start on it. It’s challenging, but we’re in a good position. I also have a great co-founder in Ned. Times get tough, but when you’re with somebody else who’s on the same journey, you manage through it. Especially now, we have a really incredible team, and everybody’s in this for the right reason, so you count on each other and you pull through. We’re not doing it for personal wealth; we’re doing it because we want to make people’s lives better.

And then I think when we take the time to get out and go meet our customers, we see that these products totally change people’s lives instantly. Whenever we’re down, we just need to go find a customer and hear their story. 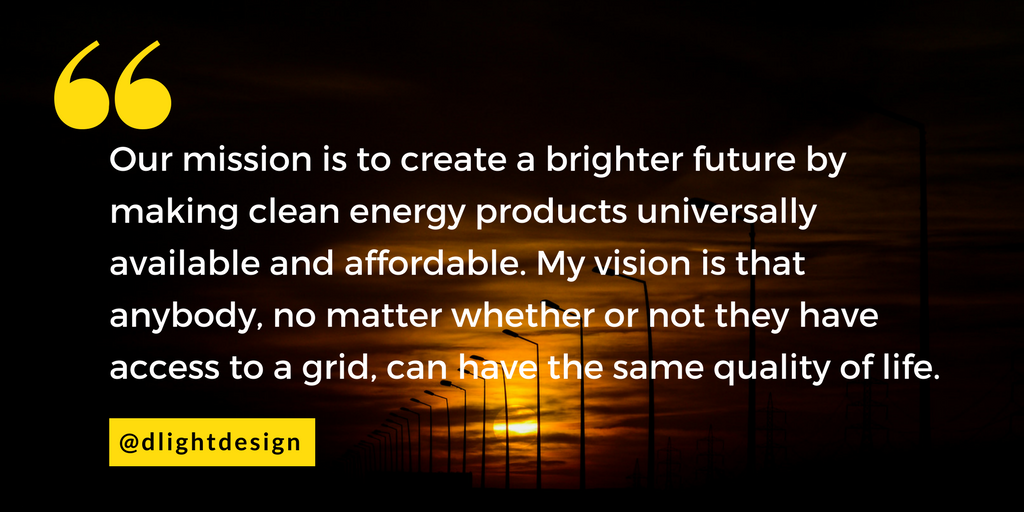 What’s next for d.light? What gets you excited about the future?

S: I think the whole theory of change was that we needed to introduce really low-cost products at scale to introduce people to the idea of clean energy, and just having basic access. So they got their light and mobile charging. But now, we’re seeing that there’s an energy ladder. So as you get more energy, you want more things to make your quality of life better. The whole game is, how quickly and how affordably can we make that dream available to these customers?

I just don’t think quality of life should be determined by where you’re born. Tweet This Quote

We’re looking at more power and more appliances that change people’s lives. The game is expanding, and we need to bring people up the energy ladder, and that’s super challenging but super exciting. I think because we were one of the trailblazers in this space, we’re known as a solar-lantern company, but we’re working hard to makes sure everybody knows we’re a solar products company. Ultimately, we’re going to provide all the rungs of the energy ladder.

What do you want the world to look like as a result of the work you’re doing? What does it mean for a person’s life? 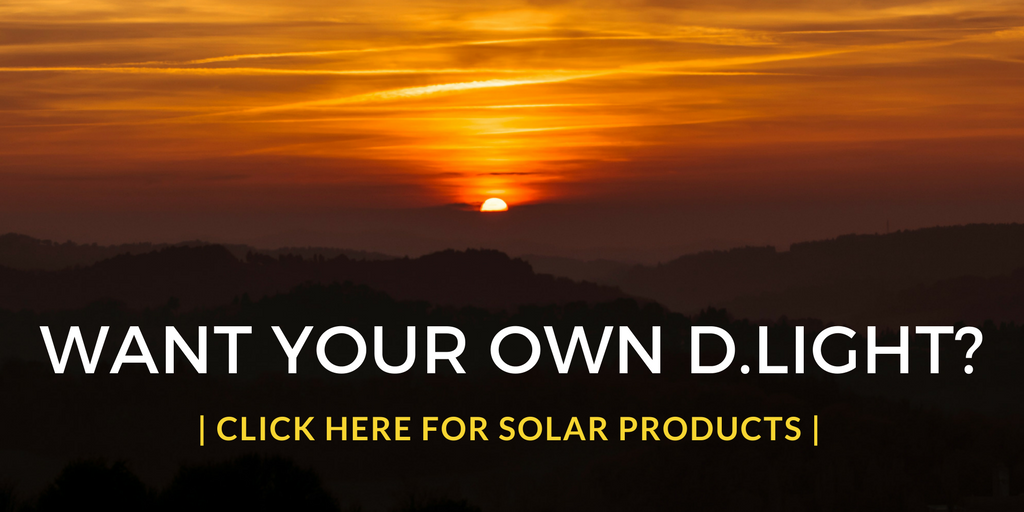 Why Naïveté is a Crucial Quality for Entrepreneurs

Why Naïveté is a Crucial Quality for Entrepreneurs