Powering the World With Solar, From the UK to India to Kenya

It was a cloudy rainy day out in Norwich. We were about 16 miles from the town, our wellington boots treading in cold water and mud. All around us were the large solar panels of Bunns Hill Solar Farm. David Gilbert, a Senior Project Manager from Solarcentury led the way, followed by the Site Manager and the Main Contractor. They were preparing to build a permanent road where we were walking, our feet stepping carefully on an aluminum trackway.

It was the first of three days, an opportunity to see first-hand how a solar farm is built, but I came here to answer a bigger question.

It’s a false perception that you need a warm climate for solar panels to work—what creates the energy is radiation, not heat. Tweet This Quote

The UK government has been highly supportive of renewable energy for the past few years, but at end of 2015 there was a large cut on Feed In Tariffs. Feed in Tariffs are defined by the UK government as the ability to receive “payments from your energy supplier if you generate your own electricity.” Not many people know this, but the government financially supports all forms of energy, including oil and gas, and the cut was targeting renewable energy only. As a result, companies in the solar energy market are looking to expand their business abroad. The big question is, does renewable energy need government help?

“We are nearing the point where solar farms will reach grid parity, which means building and exporting this electricity will cost the same or less than purchasing it from the grid,” says David. Solar panel prices have fallen and at the same time, technology and efficiency have improved. As a result, the amount of land required today to build a 5MW farm could in the future support a 10MW to 15MW farm, depending on how efficient the panels become, and if the cost continues to follow the downward trend.

The big question is, does renewable energy need government help? Tweet This Quote

The same is true for private homes, but home owners are cautious when it comes to installing the panels. One of the challenges is the perception that you need a warm climate for solar panels to work. This is not surprising, as projects in Asia and Africa get high publicity in the UK. However, what creates the energy is radiation and not heat, and cables transfer electricity more efficiently when they are cold. As a result, there are cases in which the best day for solar energy in the UK is a sunny day in the middle of winter. The largest markets for solar right now are in Germany and Japan, where the weather is cold, but radiation is high enough. The average home roof panel can last 10 years in Africa and 20 in England.

It was the second day in Norfolk. The sky was half blue, and it was even colder than the first day. We walked to the edge of the farm, deep in the puddles, but it was easier today. One of the drainage trenches had cleared some of the water. The connection of a few cables to the UKPN Switchroom, the region’s Distribution Network Operator, was also complete. David tells me about SolarAid’s project in supplying solar lights to rural Africa. After the journey I would buy one of the lamps and start testing how it works, charging the light during the day, and using it to charge my phone during the night. My payment would cover my own lamp and three others sold in Africa.

Not many people know this, but the government financially supports all forms of energy, including oil and gas. Tweet This Quote

There are places in the world where solar is the only way people get clean and safe electricity. For some residents of Uttar Pradesh, who have waited years to finally get connected to the electricity grid, rolling blackouts are still a daily deal.

“Many of those people are farmers and live under one dollar a day. Their homes are often lit by kerosene lamps, candles and battery torches,” says Priya Shah, from Simpa Networks, a company that supplies solar home systems to these rural homes. “Once the system is installed, customers receive five to six hours of clean electricity a day. They pay per month using top-up agents. The average system powers three lights and one fan, and comes with a charge controller and battery to store the energy during the day.”

Similar to a mortgage, the owner places a down-payment in cash, and the monthly payments pay back to cover the cost of the system. After approximately three years, the customers will have finished paying back the cost of the system, allowing free access to the electricity. Simpa has nine branches in eight districts in India and serves over 15,000 customers.

Another solar success story comes from the small village of Sirohi, 40 km south of Delhi. The change started with a collaboration between Engineers Without Borders India and students from the National Power and Training Institute which supplied technical expertise, with funding from a corporate investor from the United States, all organized by a new charity, the Skilled Samaritan Foundation.

To power the world completely with renewable energy by 2030, solar could make up 40 percent of energy sources. Tweet This Quote

“We lit up an entire village of 366 houses in less than a year of incorporation,” says Gauri Gopal Agarwal, founder and director of the foundation. Gauri’s interaction with the villagers started with a small tourism business that would lead walks in the mountains around, ending with a traditional dinner cooked by the local women. “One evening, when we were coming back, there was no light and we had to struggle through the village. I started noticing this was an every day problem. I knew solar would be the best way to resolve it.”

Solar did not only help navigate through the village, but also helped the children gain education by studying later into the night, and it eased the household chores of the women by giving more light hours. The relationship with the villagers grew and more projects started, according to their needs. Local beds were made and sold, from the women’s weaving, with fiber from recycled candy wrappers. The solar project spread to a second village, Khoiri, and another project, with students from Michigan started in the neighboring State of Uttar Pradesh. The Skilled Samaritan Foundation now plans to clean the lakes around the village to introduce fishery as a new source of food and income. A pilot floating island, growing specialist plants that take their nutrients from the water, has already been installed, and the foundation is looking for environmental engineers and related resources to expand. 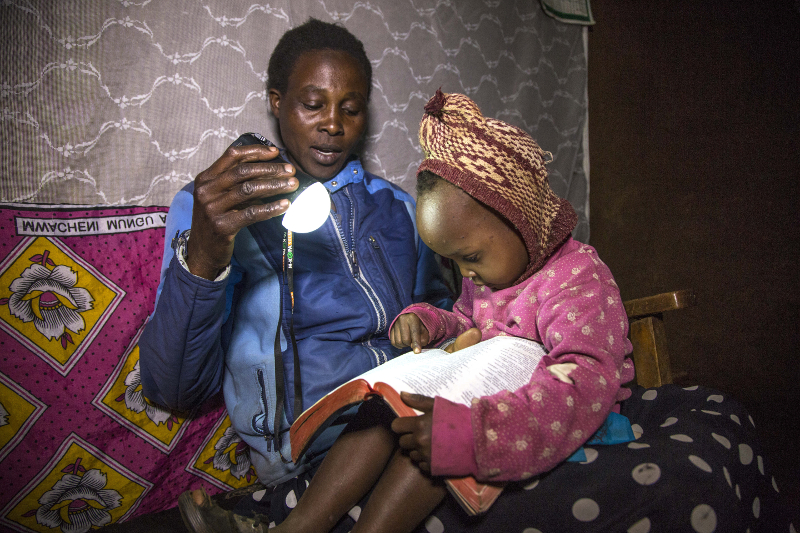 In Africa too, solar energy is changing people’s lives. “It’s not just a change in how you pay for electricity,” says Chad Larson, co-founder of M-Kopa Solar, that has so far supplied 330,000 systems to rural areas. “You go from not having electricity at all, and relying on kerosene lamps and candles, to having safe energy. You have a healthier home without the kerosene effects on your eyes and lungs, more hours of light for your children to study, and you don’t have to go all the way to town to charge your phone. Many people have told us they feel more safe when they know the phone is always working (90 percent of people in Africa have phones, but only 25 percent have electricity).”

The solar panel is considered a beautiful status symbol, as are the open hanging wires and the large light bulbs, that were designed to look like non-LED lights. “We deliberately designed the product that way, because in a rural African home this was what electricity looked like, and having electricity meant having wealth,” says Chad. “When we made our systems, we left our own taste behind and thought, we know nothing; we have to listen to our customers.”

90 percent of people in Africa have phones, but only 25 percent have electricity. Tweet This Quote

M-Kopa also supplies other solar-powered equipment, such as radio, flash-lights and television, and hopes that many citizens in Africa would be able to power a modern home without ever having to connect to the grid. They have so far raised over $35 million in investment from the likes of Shell Foundation and the Gates Foundation, and have enjoyed the support of President Barack Obama in Nairobi through the Power Africa Initiative. In the future, they hope to conduct long-term research on health and educational improvements in African children whose families connected to solar power.

Small solar business models have started in the UK, but consumers have been slow to adopt. Here, they have the option of paying for regular electricity. Some don’t like the looks of the panels, so new businesses are designing more attractive options, or simply panels that look like roof tiles. The one challenge that remains is how to best finance the installation.

“Sales of renewable energy projects are very labor intensive,” says Abhinav Jain, CEO and founder of PowerMarket, an Oxford University incubated start-up. “However, we can eliminate the complexity by letting a computer do an initial valuation. On our website, consumers identify their building on a map. Then, based on satellite imaging, we can calculate the cost for installing a solar panel on their roof and its payback.” Perhaps in the near future having a solar panel would be no different than a satellite dish.

Perhaps in the near future, having a solar panel will be no different than a satellite dish. Tweet This Quote

It was the third and last day in Norfolk. The day started with an eight o’clock meeting with the team and then a couple of phone calls. On the way back to the train station, I asked David if you could build a farm on your own and then sell it. Apparently, you could do it in a similar way to selling shares of a company in the stock market. This is called a Yield Co. For example, Abengoa Yield Plc raised over $800 million by combining a group of energy assets, some renewable and some conventional. Once sold together, the returns are more predictable than selling these assets separately.

Six years ago, Mark Z. Jacobson and Mark A. Delucchi from Stanford University published an article on how to power the world completely from renewable energy by 2030. Solar would make 40% of energy sources. As the train neared London, I could see a few solar panelled roofs, a reminder that we were already on the way.

Solar expert and writer Reut Barak is highly passionate about innovative technology to solve global warming. A business analyst, online vegan chef and trained opera singer, Reut holds an MBA from the University of Oxford and a Bachelors of Music from the Jerusalem Academy of Music and Dance. She was also one of the founding members of German charity, Musik Fuer Kinder in Not, raising funds for children in need of medical care.