The Next Generation of Rural Infrastructure: Q&A With Altaeros Energies

n the twenty-first century, having internet connection is nearly synonymous with participating in the global economy. Yet many people who live in rural areas, especially in developing countries, remain beyond the reach of the infrastructure required for modern communication.

By the end of 2016, mobile-broadband networks – 3G or above – reached 84 percent of the global population, but only 67 percent of the rural population. Just over half of the world’s population is still not using the internet. In essence, billions of people are being left behind.

Over half of the world’s population is still not using the internet. Tweet This Quote

Seemingly something out of a science-fiction movie, Altaeros Energies has developed the world’s first autonomous aerostat system to deploy energy and communication to more people at a fraction of the cost. In other words, they have effectively created a really tall cell tower (up to 600 meters off the ground) that can provide as much mobile coverage as at least 20 ground-based cell towers. Not only that, but this tethered airborne platform can lift a lightweight wind turbine up into the sky where winds are strong and consistent, harnessing exponential amounts of clean energy.

Unreasonable sat down with Altaeros’s Founder and CEO/CTO, Ben Glass, to discuss what it’s like to develop the next generation of infrastructure to affordably and sustainably connect billions of people. 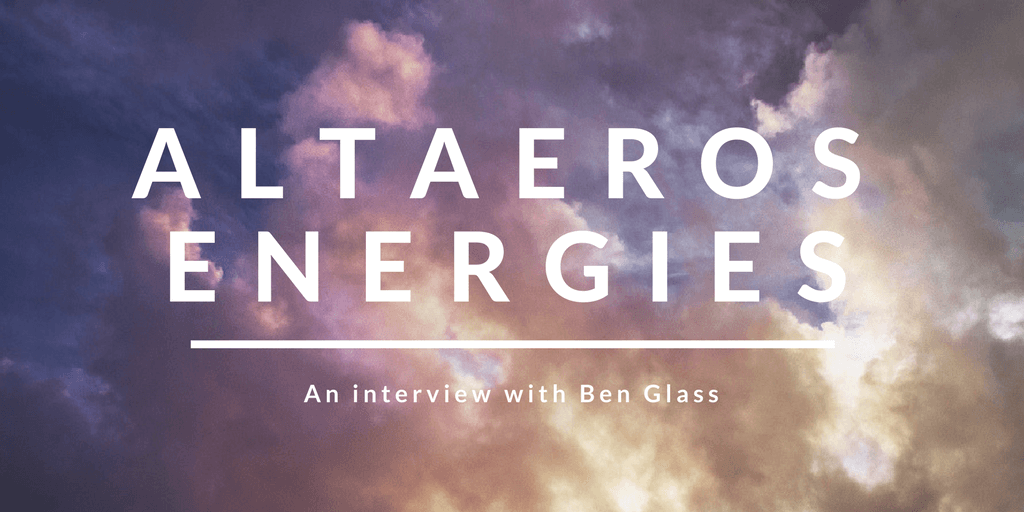 Can you tell me about how your childhood influenced you to become an entrepreneur?

Yeah, so I am the product of two very different parents. On the one hand, my mom was a park ranger and environmentalist, and on the other, my dad was a former Israeli Air Force pilot and mechanical engineer.

I feel like I’m very much the product of those two aspects: the moral compass that drives me to solve what I consider to be important sustainability problems, and the insatiable curiosity of an engineer. I basically started my engineering curriculum at the age of 3. I would always ask my dad, “What is that? How does that work?” And he would always give the unbelievably frustrating answer of, “I don’t know, how do you think it works?”

In high school, I was really interested in rockets and I wanted to build a real, liquid-propelling rocket engine. I found a kit online and my parents refused to let me buy it, but they encouraged me to write a grant application to my grandparents for money to buy the blueprints for the plan and then all the materials to actually fabricate it myself. My dad’s friend owned a machine shop in Michigan, so we would go on the weekends and we built the rocket ourselves instead of just buying the kit.

How did those experiences manifest into Altaeros?

I think that in hindsight I was probably destined to start a company. I never went out and got a typical job — I started a catering company in high school, and then all of my internships were at startups. So I think I was predisposed to be an entrepreneur.

Then I went to MIT to be a rocket scientist, whatever that is. And I had the opportunity to do an internship at SpaceX, which was a really incredible experience. But I think one of the big takeaways was that in order to be able to tackle the big problems — the really big problems — you had to be Elon Musk. You had to be a billionaire and go and start a rocket company or you’d be designing a widget.

After that internship, I got pretty involved with the wind-energy community of the MIT energy club and ended up building an array of wind-turbines for my senior project. Around the time I graduated, I read a paper that came out of Stanford, which ended up being the first extensive evaluation of high-altitude wind sources as a source of energy for civilization. It showed that it’s a hugely geographically diverse, super-dense energy source that we just don’t have a good way of harnessing. There’s enough energy in high-altitude winds to power civilization 100 times over.

So as an aerospace engineer interested in wind energy, that just seemed like a really cool challenge that if we could crack it, we would open up enormous potential and have an incredible impact. That eventually became the seed of genesis in Altaeros. So we got our start as an airborne wind energy company. 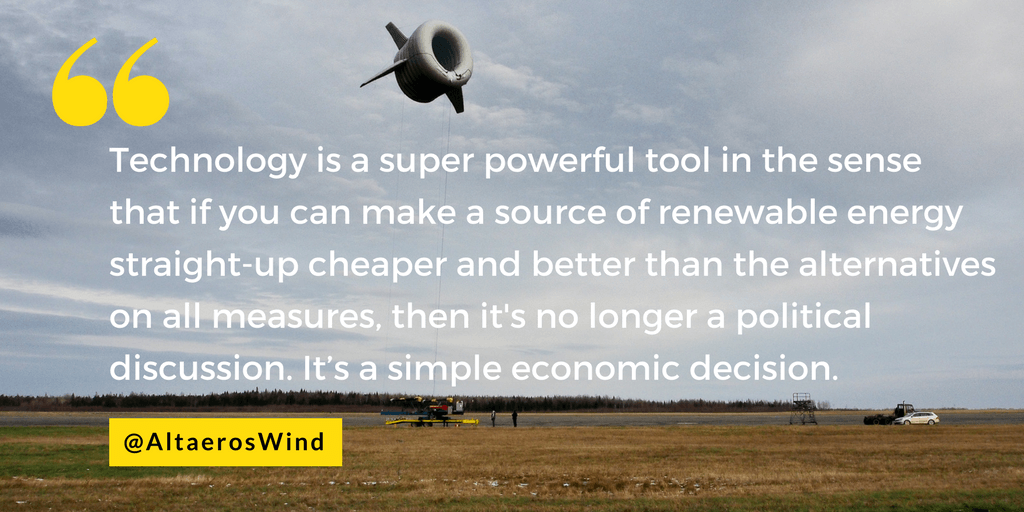 What would you say is the problem that Altaeros is trying to address?

Throughout the life of Altaeros, the mission and my personal goals have expanded somewhat. Right now, we have a massive problem with infrastructure in the sense that it’s kind of stuck in the 19th and 20th centuries, and energy is still centralized and dirty.

Everything is so tied to the communication sector, which is rapidly advancing, but the infrastructure for it is still slow to adapt. There’s a real opportunity to change the business model for that type of infrastructure to better fit the modern world.

I want to use technology to make it easy to make the decisions that lead us to a sustainable, equitable world. Tweet This Quote

Yet all of that has to be accomplished in a responsible way with the resources that we have. So right now we’re starting our first commercial product, and we’ll be in the telecommunications space. It’s basically a system that can drastically reduce the cost, the time, and the energy footprint to employ communications infrastructure and make it economical to do so in all of the rural areas around the world. And those are the communities that are being left out more than anyone else.

When you think about economic inclusion and the fact that you really need to have an internet connection to participate in the virtual economy, it’s the rural farmers in developing countries who are being left behind. We’re trying to create the infrastructure to connect all those people cheaply and sustainably enough that the carriers recognize there’s both monetary and ethical value in it.

How does an Altaeros product work compared to a cell tower or traditional wind turbine?

So let’s use a cell tower example, because essentially, what we’re doing is making a very tall cell tower. A cell tower is just a stick in the ground that you put radios and antennas on up at the top, and then you connect it back to the internet at the bottom. And that broadcasts wireless broadband or voice service, and people can connect to that with their phones.

The problem is that most towers are maybe 100-120 feet tall, and because they’re not that tall, it really limits how much area you can cover with a single tower. Now there’s interest in building higher, but towers become very expensive as you build bigger, because of the steel and foundation. In rural areas it becomes prohibitively expensive to build towers much taller than they are today.

So what we’re doing is providing a platform for those radios and antennas that is much higher. The super tower is about eight times taller than typical rural cell towers today, and by getting up to that height, we can actually provide the coverage and the service that you would otherwise need between 20 and 30 individual cell towers to do. So we’re consolidating all of that infra-structure into a single, super tower installation. 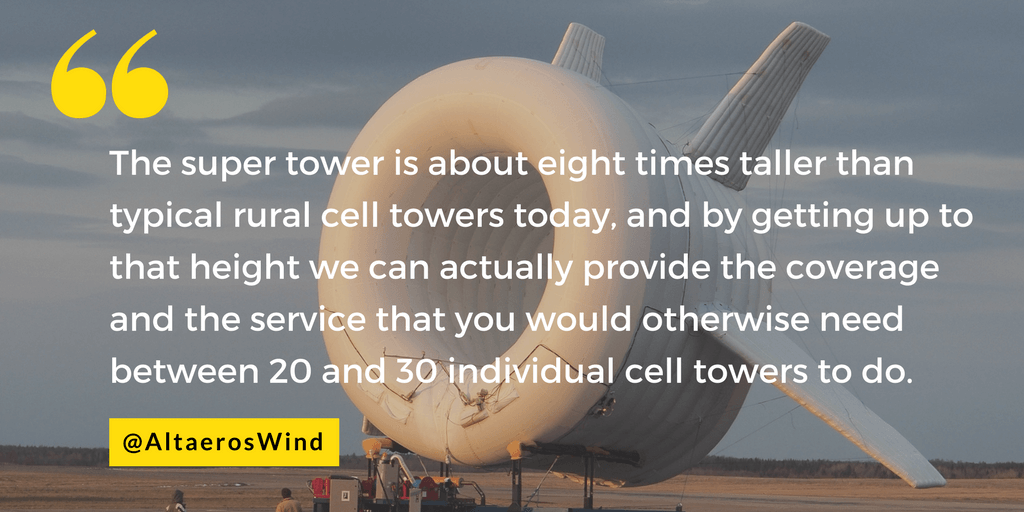 What has been your greatest triumph to date with Altaeros?

Oh man, at least just hiring a badass team. It’s at the point where I don’t have to be there day-to-day, and the team’s just awesome.

Also, early on, we were going to build the world’s first autonomous aerostat, or tethered balloon. The defense industry is the primary user of aerostats today. They’re used for surveillance and communication in military settings. So we go to one of the large defense contractors and told them that we were going to go make an autonomous aerostat. And we basically got laughed out of the room. Like get out of here, you guys are just a bunch of stupid kids. We came back and met with him a year later and sat down and played a video of the world’s first autonomous aerostat that we had deployed a few months before that. And to see his eyes open, that was a pretty cool triumph.

What have been some of the biggest challenges that you and your team have faced?

You have to overcome a lot of emotional barriers when you’re trying to do something that a lot of people consider impossible. It’s hard to convince people that we’re not only serious about this, but that we’re actually making it happen. These days, that conversation is becoming easier because we have a track record. But especially in the early days, it was hard to overcome the immediate emotional obstacle of doing something that sounds too futuristic to be true.

Your gut is just your intellect spinning faster than you can comprehend it. Tweet This Quote

And then the other challenge I think every startup knows is just, shit’s hard. It just takes a long time and a lot of effort and a lot of sweat and blood to get anything done. We’re constantly trying to do so much with very few resources, and that’s hard. In the spectrum of startups we were up against, we were the under-resourced, super scrappy underdog.

What do you want the world to look like as a result of Altaeros?

I want to use technology to make it easy to make the decisions that lead us to a sustainable, equitable world.

Technology is a super powerful tool in the sense that if you can make a source of renewable energy straight up cheaper and better than the alternatives on all measures, then it’s no longer a political discussion. It’s a simple economic decision. Nobody’s going to choose fossil fuels be-cause they’re politically opposed to renewables if renewables can save them a boatload of money really quickly. And so I think the key is maintaining a huge focus on innovation to create that shift through technology. 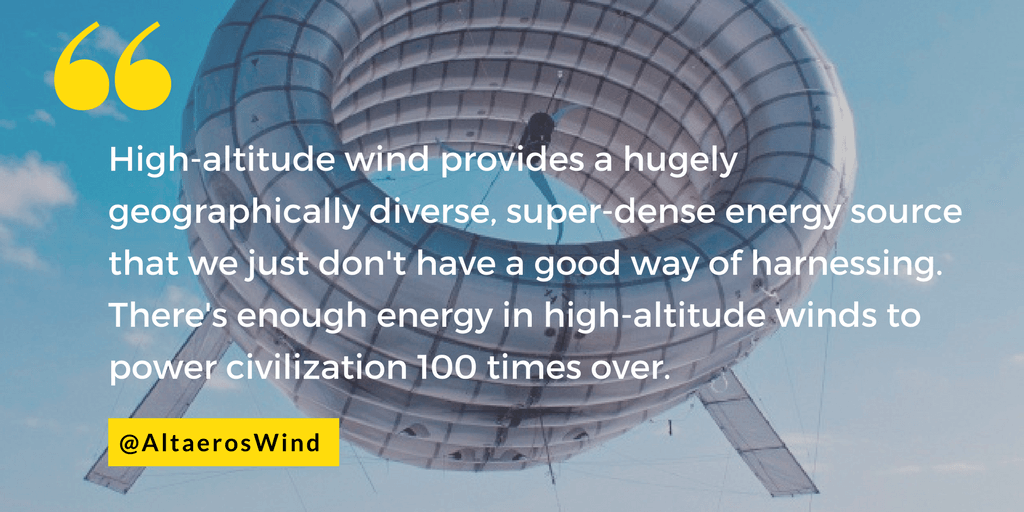 Knowing what you know now, what advice would you give yourself when you were first starting Altaeros?

It’s hard. Be patient. And trust your gut on hiring. Your gut is just your intellect spinning faster than you can comprehend it. It can make sound decisions that you just don’t quite understand yet. And one thing that I’ve learned is that my hiring gut has been very, very good. It took me some time to learn that.

What about your long-term vision for the company excites you most?

I think the super tower is really just the beginning and that the long-term vision is to get back into energy and broadly expand into the various infrastructure areas that need a lot of innovation. Energy and communications are the two big arenas that we’re starting with, and they are more interrelated than is obvious. I’m excited to tackle that in a responsible and efficient way.

How The Clean Energy Field Is Like a Juicy Orange

How The Clean Energy Field Is Like a Juicy Orange