Clean, Safe, Unlimited Energy for Everyone: Q&A with General Fusion

By 2050, we could see nearly 10 billion people inhabiting Earth who will require energy in order to participate in the global economy. Today, coal still provides 40 percent of the world’s electricity. It’s also the most carbon-intensive source of power, with its CO2 emissions producing the vast majority of the world’s greenhouse gases.

With energy demand rising in tandem with population growth, we need prevalent sources of energy that are emission-free, safe, and affordable. Fusion energy could be the answer.

General Fusion is developing the world’s first commercially viable fusion power plant. Forget the images of doomsday nuclear meltdown. With fusion, meltdown is impossible; it’s actually the same process that powers the sun. Fusion energy emits no greenhouse gases, produces no long-term radioactive waste, and it can be created anywhere in the world.

Unreasonable sat down with Bruce Colwill, Chief Financial Officer at General Fusion, about how fusion just might provide unlimited energy in the not so distant future. 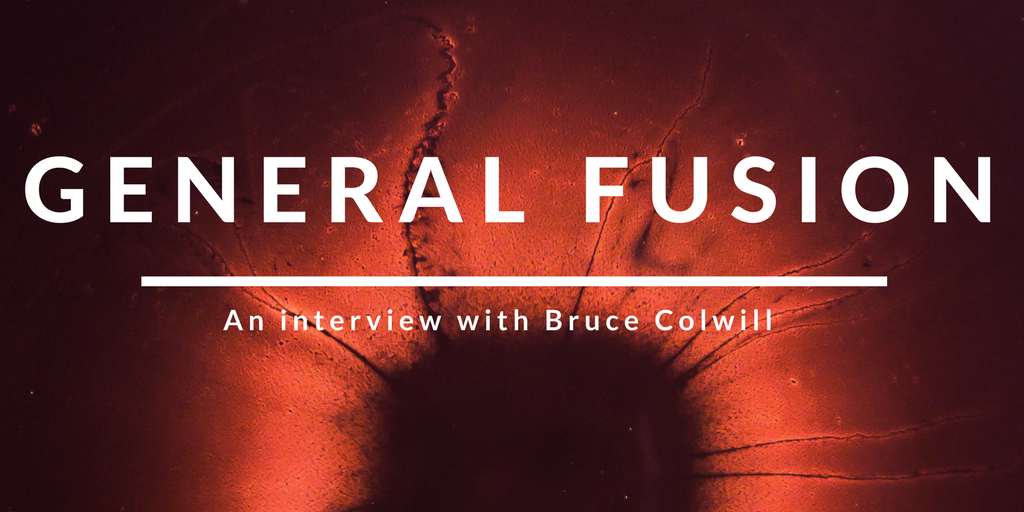 What drew you to General Fusion initially?

It was their mission of trying to do something that some people consider audacious, game changing, or even Holy Grail-ish. Just a group of smart people, pulling together to try to do something that’s really going to improve a lot of people’s lives, while recognizing that there will be a high science risk. I thought that this will be one of those experiences that I’ll tell my grandkids I was a part of when I’m sitting in my rocking chair. So that was what drove me to the company and ultimately why I agreed to come work for them.

What was it about you as a person or even growing up that would have indicated that you would choose to pursue working towards a mission that others might consider to be impossible?

My father was an independent business guy. He’d just create something from nothing to feed the kids. So I saw his drive, and that may have played a role in it. I spent a number of years early in my career over in eastern Europe, just after the Wall fell, and I saw how the growth in that economy was fueled by startups. The real growth and excitement was coming from the entrepreneurial initiative and I saw what it could do and I joined my first startup. Startups can be incredibly stressful places to work, but when you come out the other side of a success story and you look back and you see what was actually achieved, despite all the barriers and challenges, it leaves you with an amazing feeling. I think once I got the bug I kept it.

Switching gears a bit, why is commercial access to fusion energy so important?

The reason we highlight commercial is because there are a lot of fusion efforts out there, but they tend to be primarily dominated by a lot of government initiatives. And ultimately the hope is that there will be a commercial application for it, but that’s not the primary focus at the moment. It’s really just trying to understand the science. We felt that there’s probably a way to be more innovative, creative, and adaptive. So we aimed to take some of the knowledge that came out of those programs and combine it with the new developments of technology, and figured it was the faster way to get fusion energy onto the grid. Everything we do is always focused not just on the pure science — experience for the sake of science — but we ask how we can help accelerate getting fusion energy on the grid.

Why is energy such an important issue to track?

And if you look at projections of where we’re going, despite all the advancements in solar and wind, fossil fuel use is going to increase at a steady, high rate from now until 2040 or 2050, until there is finally an alternative. So there needs to be an alternative.

The second reason is if you look at the distribution of energy consumption around the world, it’s totally unequal. There’s high-inequality there. And being able to provide more energy provides a lot more job opportunity, and ultimately, it’s going to provide more security. If you think about the amount of upheaval from the lack of economic opportunity that we’re seeing now in Northern Africa and Europe, if there’s more economic opportunities, people are not going to risk their lives on a raft to go across the Mediterranean. So if there’s a greater availability of energy, then we can do both simultaneously: reduce carbon emissions and create more jobs and therefore more social security. 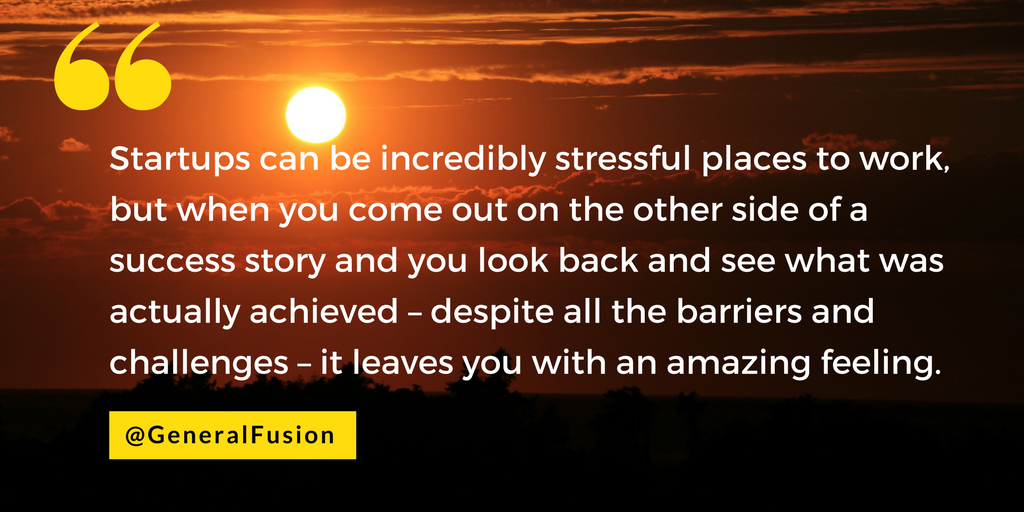 How do you imagine this becoming integrated into society?

Everyone’s familiar with fusion, whether they realize it or not. They basically see the power of the sun every day — that’s fusion. And all we’re doing is taking what works very well, day in and day out in the sun, and trying to figure out how to compensate for some differences on Earth and make that work on Earth.

What General Fusion does is we take the starting materials, which is something called plasma, which is a super-heated gas that exists in the Sun. What we need to do is figure out how we can get it to compress and heat up on Earth so that fusion happens. If fusion happens, the result is clean, abundant, safe energy. It sounds simple, but plasma physics are very difficult.

What do people get wrong about fusion?

One thing people get wrong about fusion is thinking that fusion hasn’t advanced over all the years. There have been substantial advances in fusion technology, fusion understanding, and plasma understanding. The amount of energy that is generated by existing plasma systems, having increased dramatically since the 70s, is essentially 10,000-fold.

Are there any safety concerns surrounding nuclear fusion?

No, it’s not like nuclear fission, where we see many issues with current technology. That’s why fusion is referred to as the holy grail of clean energy. It ticks all the boxes: clean, safe, the material, the fuel that goes into it is inexpensive. Basically, it’s heavy water. So there’s an almost virtually inexhaustible supply of it and it’s location-independent.

And you know, once fusion energy is available on the grid we will continue to advance it, continue to optimize it, and we need to figure out ways to do it better and cheaper so that it’s more readily available to everyone. 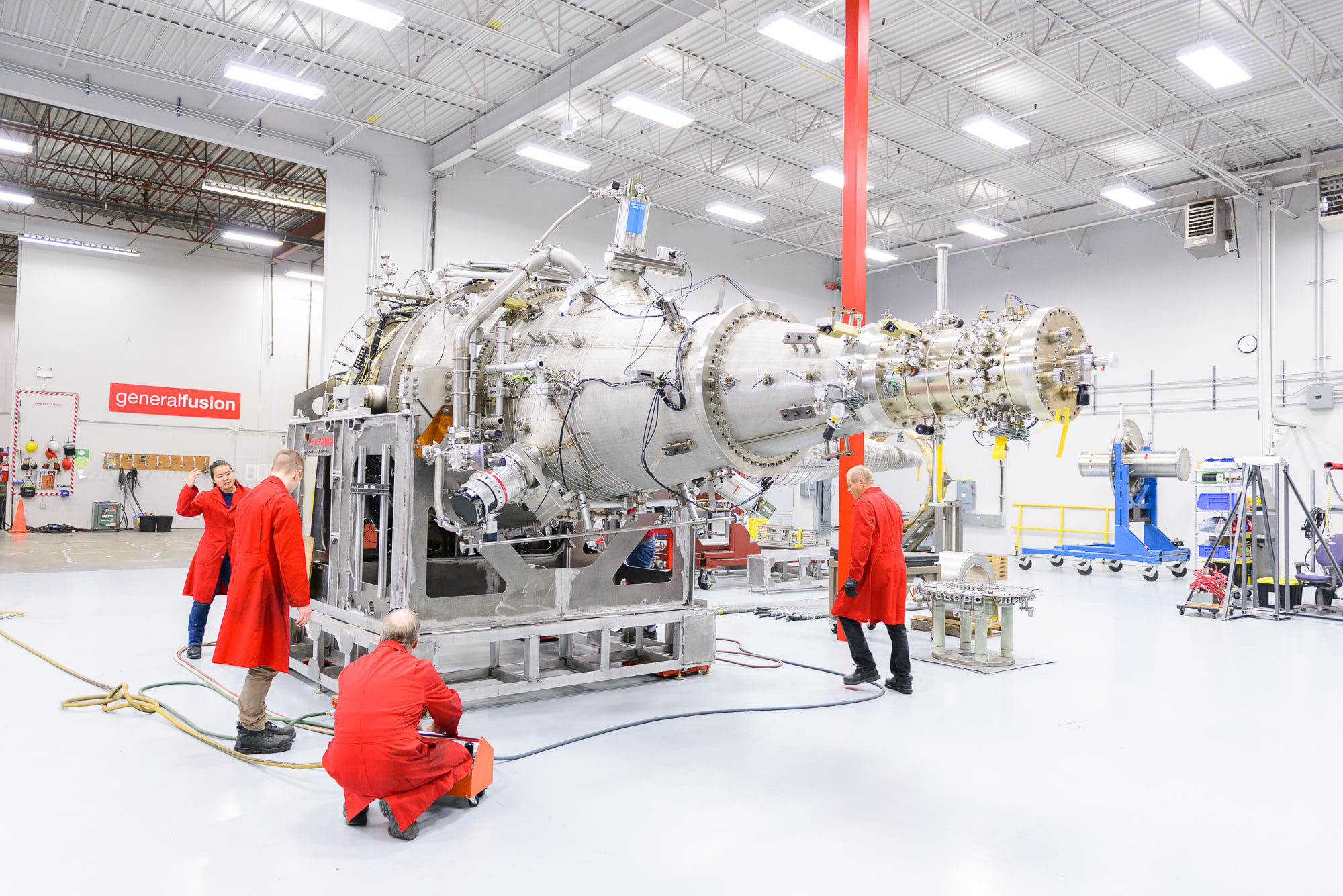 What have General Fusion’s biggest obstacles been?

There’s sort of a fundamental science challenge that we’re trying to overcome. I mean, we are trying to do something that hasn’t been done before. And we’re making great strides and we have a much better understanding than we did when we started, but we still have science risks to overcome.

Do you think that will change?

Absolutely. This opportunity is so large and so important that if one of the companies —and I hope it’s General Fusion — gets to the point of being able to design a fusion reactor that’s commercial and scalable, then it’s gonna get people’s attention. People will start to understand that there’s a different way to create energy for the world.

What happens if a reactor goes awry?

It turns off. One of the challenges of fusion is that it’s very hard to initiate. But then if something doesn’t work quite right, it shuts down. It just stops. It dissipates. So that’s one of the reasons why it’s so safe.

And usually people associate fusion with fission, which can be disastrous when something goes wrong…

Yeah, it can be a meltdown, or if it explodes, then radiation is dispersed. 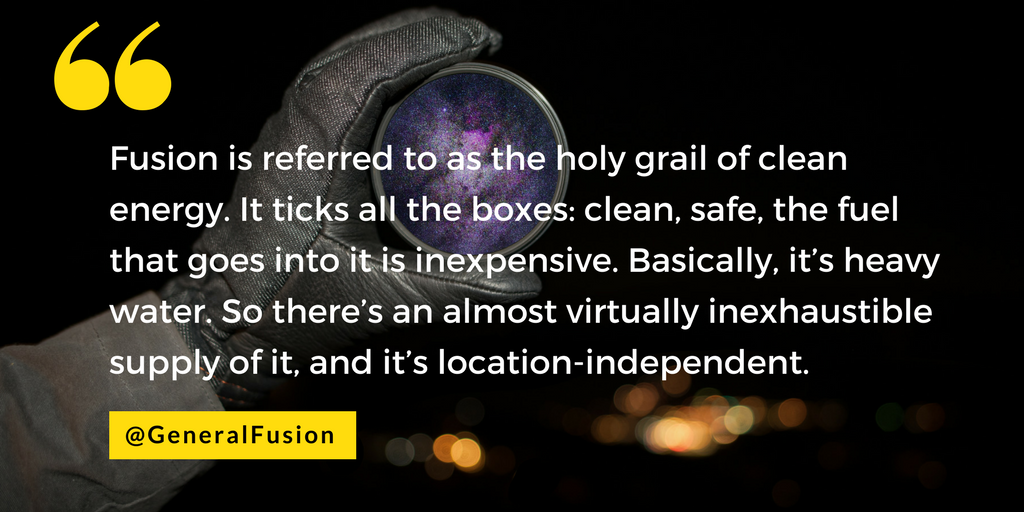 What does the world look like if General Fusion succeeds?

Cleaner. I mean, we’re not gonna replace fossil fuels right away. But we’ll certainly play a big role in making it largely redundant, and if we can create a fusion reactor that is location independent and it doesn’t rely on fossil fuels, then we’re going to be able to deliver energy not only to the existing, developed world, but also to the developing world. In a clean way.

What happens if General Fusion fails?

Well if we fail, which we really hope we don’t, then hopefully somebody else will figure out a different approach. I fundamentally believe that fusion energy will be cracked, one way or the other. And maybe it’ll be these massive government projects that sort out the way, but that will take a long time. What we want to do is get it sooner rather than later. But eventually, someone else is going to figure it out, and if not us, we’ll raise a glass of champagne the day somebody else does it.

In scientific fields, people often want to own progress, but it sounds like General Fusion takes much more of an inclusive approach.

Absolutely, we have. We have tried to be very supportive of other companies’ efforts. We have a big project we are working on right now, in partnership with Microsoft, to basically get our research data into the cloud so that third parties can access it and help us figure it out. So we have symposiums, we bring people from other projects into our facilities, and our whole aim is to engage in open collaboration. It’s a really big part of our philosophy. 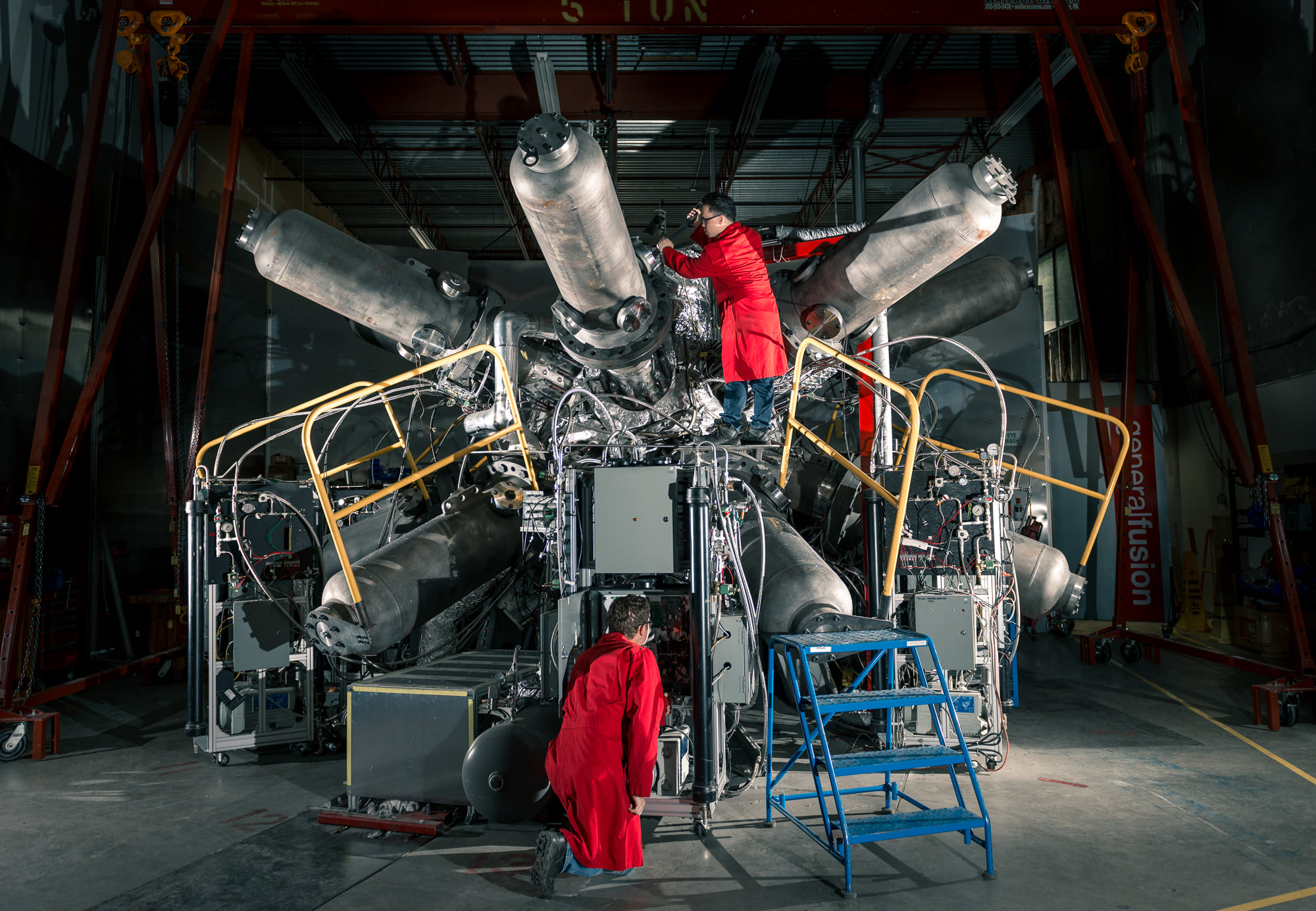 How do you personally stay sane and grounded in what I can only imagine is a trying and constant battle? Entrepreneurship is hard. How do you manage that?

It’s hard, and sometimes it’s stressful, but the things that really help — and this might sound cliché but it’s not — is that there is a really good group of people at General Fusion. We have some people who have been in the company for a short period of time, or others for a long period of time, but they’re all passionate about what they’re doing and they all get along. We don’t agree all the time but we all get along. Nobody’s ever alone in this, and that helps.

And then having a wife who also works for startups and is in that entrepreneurial environment is really helpful. It’s huge, because it’s somebody who understands. I mean you might think it’s crazy to have a husband and wife both in startups and entrepreneurial environments, but it’s having somebody else who absolutely understands. When you come home and you say one sentence, she totally understands the context, understands the stress, understands what it means. It’s fantastic. She’s not just my wife, she’s my friend and confidant and mentor. And that helps more than anything.

Why do you get up every day excited to continue working on this problem?

Because the world really needs a cleaner source of baseload energy. The population continues to increase. We’ve cracked seven billion. That’s a lot of people. That’s a lot of energy to make. And it has to come from somewhere. Our existing efforts — with all the amazing technology that’s being developed by so many countries and companies — are not going to be sufficient to meet the demand unless we burn more fossil fuels. Period. Full-stop. And if we can play a role in reducing that, then we’ve achieved exactly what we’ve set out to do.

How to Know Which Type of Investment to Seek

How to Know Which Type of Investment to Seek