Finally, the Turbine We’ve Been Waiting For: Q&A with Semtive

n 2015, over twice as much money was spent on renewable energy than coal and gas power combined. Despite record levels of investment and sharply falling prices for solar, wind, and hydropower energy, eighty percent of the world’s energy consumption still comes from fossil fuels. The energy sector remains responsible for at least two-thirds of greenhouse-gas emissions today.

Not only that, but 1.2 billion people around the world continue to live without access to energy at all. As the global population continues to grow, we need to get smarter about how we generate and consume energy.

Semtive, founded in Buenos Aires with an office in Silicon Valley, builds small wind turbines that function both on and off the grid in any weather conditions. These turbines need only a light breeze to activate, and they can work for individual households, businesses, and industrial applications.

Unreasonable sat down with Semtive’s CEO, Nacho Juarez, to discuss his technology’s potential to democratize and decentralize energy access for the masses. 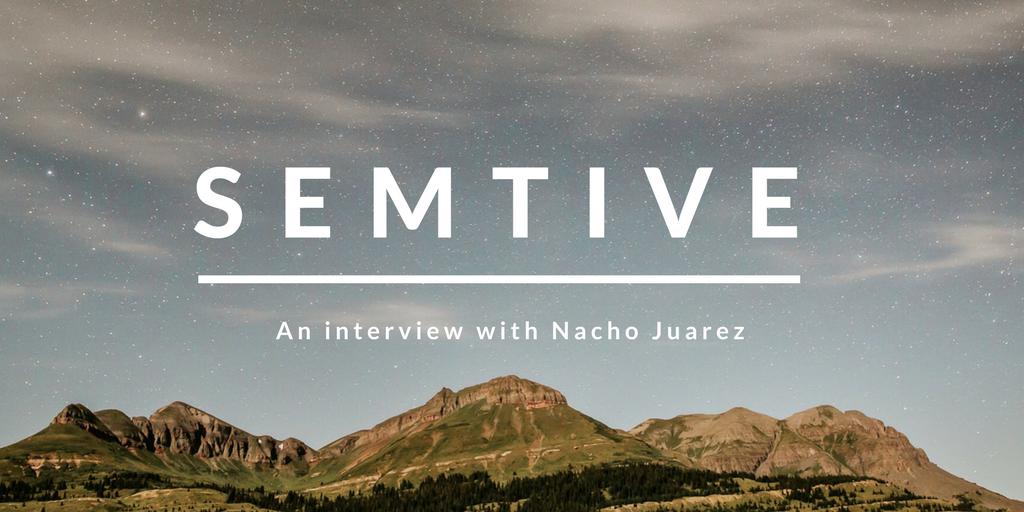 My partner Nicolas and I wanted to do something for the environment, something sustainable and long-term, and so we started by figuring out what we could accomplish together. We each had our own endeavors: I had some engineering and marketing companies, and he was working as a financial analyst. As we researched the market in our region, Latin America, we realized that we could manufacture a better product than what existed as long as we kept the price below a certain point.

It is very, very difficult to raise money in Latin America. The factors that affect numbers are completely different and everything from finding manufacturers and buyers to actually creating the company is a challenge. For example, it took an entire year just to incorporate Semtive.

And you are incorporated in Argentina?

Yes, well actually now we are a U.S. company that owns the company in Argentina. We’re very happy to be in Argentina — we sold our first turbine through a public bid from the Buenos Aires government. We’ve now started working with residential customers in Latin America, but our focus is now scaling the company in the United States.

What is the problem that you’re trying to address through your work with Semtive?

We are trying to democratize access to energy. Today’s energy solutions are highly problematic, especially in how energy is generated. In some cases, it’s expensive. In other cases it has a huge environmental impact. In both cases, the biggest problem is distribution. Energy has to be generated in one location and then transported to another. They use transformations in the middle of that process. You basically lose 40 percent of that energy just in transporting it. Semtive focuses on trying to find a solution in a decentralized way, by generating electricity where it’s needed.

How effective are Semtive turbines as compared to solar?

On average, our turbines are four times more effective than solar, depending on wind conditions. At night they’re infinitely more powerful. If it’s midday and there is no wind, turbines are less efficient than solar in some ways, but it really depends on the conditions.

How does your solution factor in the force of the wind?

Conventional wind turbines actually use a rated wind speed of 30-something miles per hour. We realized that those conditions are not really suitable in every part of the world, and we decided to figure out how to solve for that by designing a system that can work at low wind speed conditions. 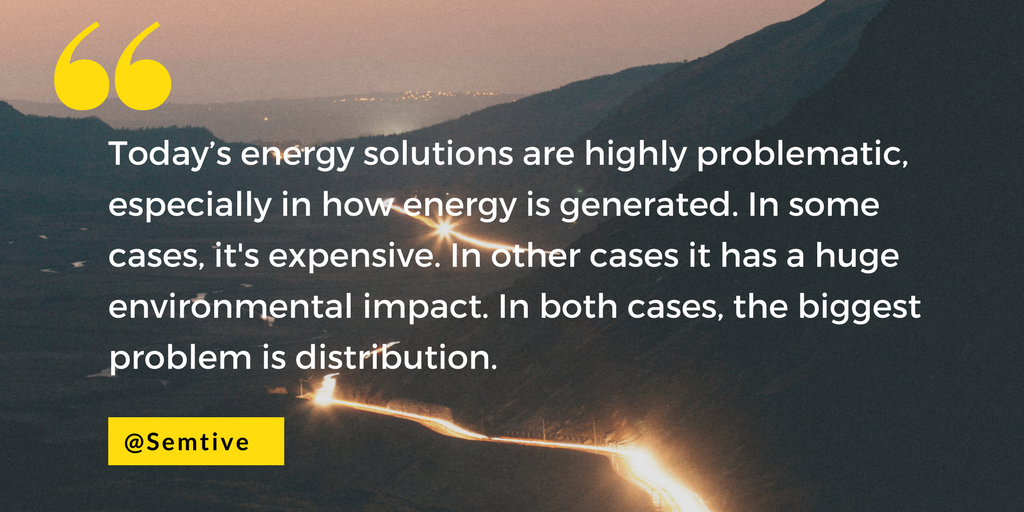 What are some of the greatest challenges that you have faced so far?

Well, a lot of them. Everything is a challenge! We have technical challenges to create something with a lifespan that will last, that is easy to assemble and install, and that is new. Apart from that, since 2008 or 2010 we have faced import limitations. If we needed a part that was manufactured elsewhere, we were not able to buy it. We were not able to use dollars with suppliers. So technically and operationally it was difficult to try to do business in that environment. Then we had the financial difficulties of being not able to raise money. Then the personal difficulties of going and moving to a new country. So everything is truly a challenge.

What would you consider to be your greatest triumphs?

Being able to work and grow the company despite all those challenges. We are really proud of all of that. We know that we can handle anything. I think that the challenges we have found are our biggest rewards, too.

There are technologies somewhat similar to yours in the industry. What sets Semtive apart?

Other technologies look like ours, but actually, they are not competitors. Our turbine can generate more electricity at a lower cost and for a longer time. Because of the wind speed with which we work, the materials that we use, and the simplicity of our design, we have a lot of small details in place that don’t allow us to compete with those other technologies. It’s on another level. 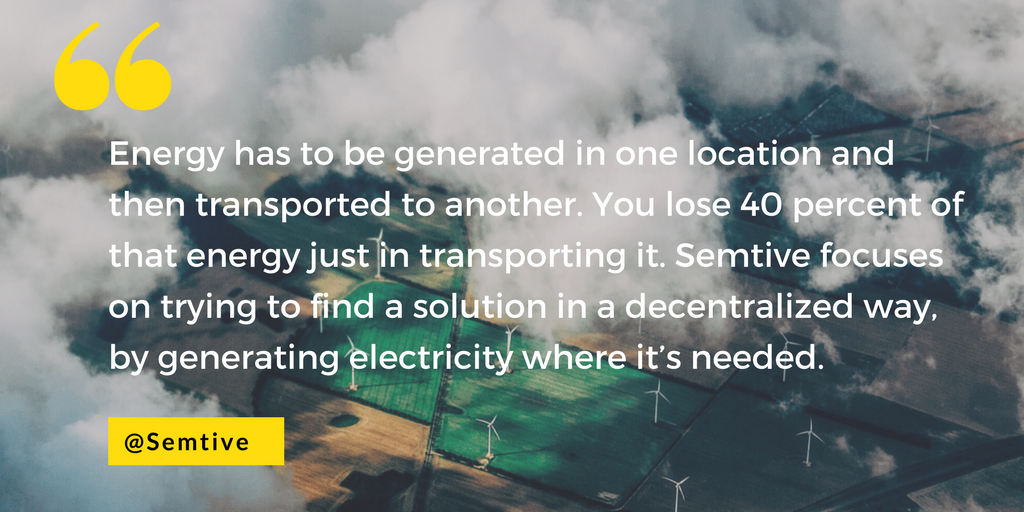 What do you want the world to look like as a result of your work?

Well, hopefully in the next 30 years we can be the biggest energy company in the world and everybody will use recycled and clean energy produced by one of our systems. It would be amazing to have a turbine spinning on every rooftop in the world.

What happens if you fail?

We’ll figure out a way to do it anyway.

Knowing what you know now, what advice would you give to yourself when you were just starting up?

Try to focus on one thing and don’t listen to what other people say that I have to do. At the same time, we’ve arrived where we have because of all of the mistakes we’ve made. You never know if changing something would put you in the same position that you are in today. It’s all a learning experience

How do you stay sane? 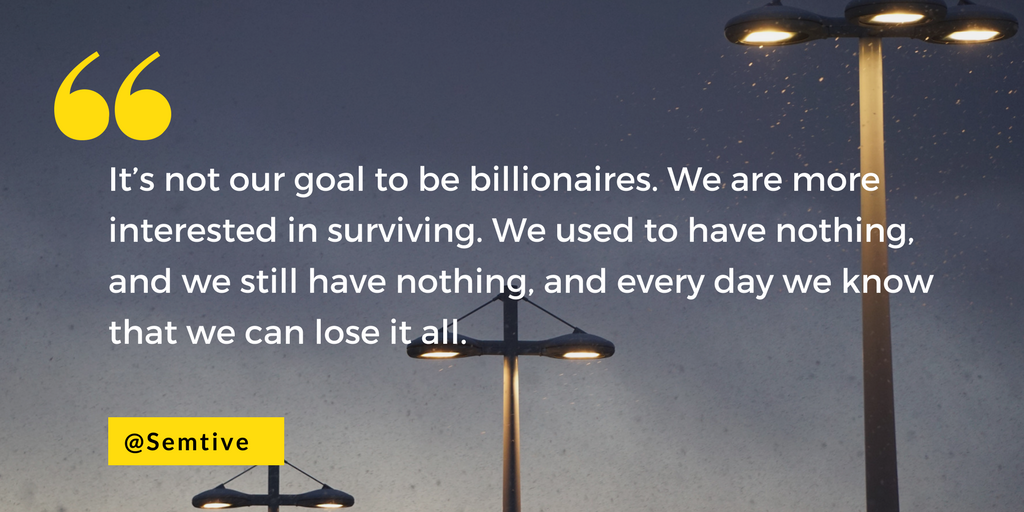 Well to be here I think that with years of not having any money. We came from nothing and we have nothing to lose, so our objective is to have a turbine on every rooftop. That’s what we want to do. If in the process we can make some money, that’s great. It’s not our goal to be billionaires. We are more interested in surviving. We used to have nothing, and we still have nothing, and every day we know that we can lose it all.

So what is it that gets you excited about the future of the company?

That we are growing every single day. I’m really, really excited about seeing the future that we are given every day, and looking back we see the huge path that extends behind us. We keep growing faster and faster, and that makes me really happy.