The following is the first of a three-part excerpt from One Person Acted and Everything Changed, a book that chronicles ten accounts of extraordinary people who risked everything to change the world.

abindra Mishra couldn’t understand why so many poor people in his home country of Nepal were hungry and suffering, some of them starving to death. Nor could he understand why Nepalis who had found success in other countries were doing nothing to sustain their own people.

“I had to ask, where was their generosity? Those individuals who had received foreign educations and made good incomes were staying abroad and ignoring the plight of their own people.”

It went against everything Rabindra Mishra learned as a child. His people had always been intrinsically connected to one another — could they no longer feel that? Had they forgotten it was their very interdependence that kept Nepal strong for millennia? Did they no longer remember the ancient Hindu proverb their grandparents had lived by: “May you have enough to eat and give away?”

And then it came to him — he would need to find a way to rekindle the ancient tradition at the heart of the Nepali people’s survival, a tradition reflected in their common counsel, “Take a bit of what you have, and share it with your neighbor in need.”

This is how the ancient tradition translated into action. At mealtime, every family separated a bit of rice and other food from their cooking pots. They set the food aside, and later delivered it to a needy person or family in their community. Because the practice was followed in nearly every home throughout the land, it sustained each person in multiple ways, including social needs and emotional attachment. No one was ostracized or made to feel inferior, and the poorest among them were equally valued contributors to the community. 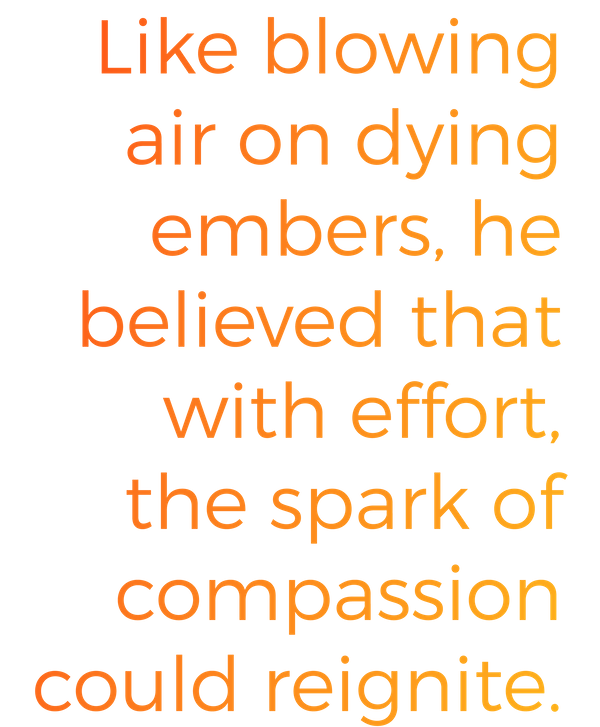 From Rabindra’s perspective, this tradition ceased to exist sometime between his grandparents’ lives and his own generation. To have any hope of restoring the practice, Rabindra knew he would need to dress it in modern ways to fit the evolving Nepali culture. But he also knew he would have to change his own life dramatically; he would have to give up his successful journalism career with the BBC, as well as his comfortable life in London, and devote the rest of his life to restoring the soul of his nation.

Compared to the 11,000 years his ancestors had lived in the region, Rabindra believed that two generations was not so long a time, and that the flame of generosity and cohesiveness could still be revived. Like blowing air on dying embers, he believed that with effort, the spark of compassion could reignite.

hree quarters of the country of Nepal, including its entire northern border with Tibet, lies tucked beneath the towering Himalayan Mountains. The range includes Mount Everest and seven more of the world’s tallest peaks, as well as 250 others whose summits reach just above 20,000 feet, attracting climbers and trekkers worldwide. If not for these awe-inspiring mountains, you may not have heard much of anything about this land, or the 31 million primarily Hindu people who live in one of the least developed nations in the world.

As it was, few people knew anything about Nepal for centuries. While much of the world developed and grew increasingly interconnected, Nepal’s government intentionally isolated its citizens from the outside world. This sequestering, combined with its formidable terrain, made the country inaccessible. As a result, the Nepali people relied solely on the interwoven fabric of their own communities for survival. Though desperately poor, the people of Nepal sustained a strong and vibrant society where individuals relied upon and cared for one another in every possible way.

All of that began to change in 1950, when a palace revolt restored Nepal’s ancient monarchy and the new king flung open the country’s borders to welcome a modern, yet unknown world.

That opening was a turning point that brought seismic changes to a people accustomed to the jolt of devastating earthquakes, but not to the shock of a contemporary world. Seemingly overnight, mountain climbers, journalists, foreign government officials, individuals seeking business opportunities, and a multitude of others surged in from across the world. They brought new customs, new technologies, and a new story of how other people live. 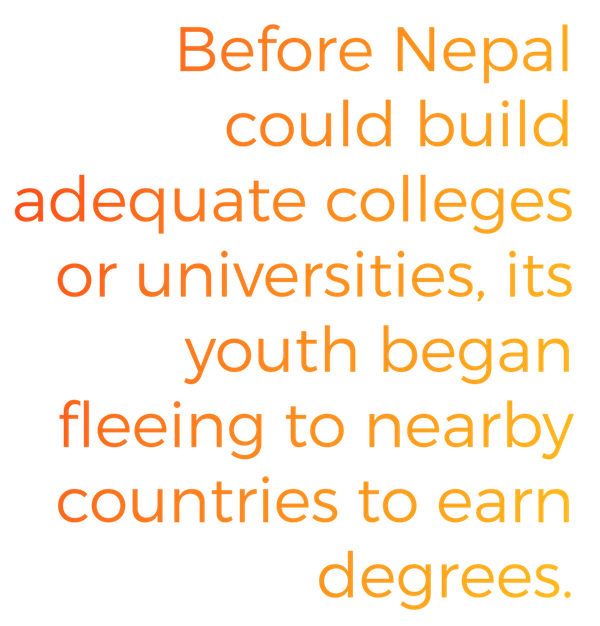 A period of great flux began. All the wonders of the modern world — previously unknown to Nepal’s citizens — were suddenly discovered and desired. Youth began to seek opportunities that would help them afford a more prosperous life, and it wasn’t long before they discovered they would need an education to take advantage of all the world was offering. Before Nepal could build adequate colleges or universities, its youth began fleeing to nearby countries to earn degrees. Once educated in academic and worldly ways, few chose to return to what they now considered a backwards and underdeveloped country with little to offer them. Nepal’s cohesive society began to unravel.

abindra Mishra grew up in Nepal two decades after that time of great change began, when remnants of his culture’s honored traditions gave way to the inevitable changes brought on by foreign visitors and exposure to the modern world. The timing of his birth left him aware of and connected to his country’s past, keenly aware of its present challenges, and increasingly concerned for its future.

Like most Nepalis at that time, Rabindra lived in a tiny, remote village far from Kathmandu, the only sizable city in the land. He attended the local school — a fragile hut with few resources. Still, he was a curious and conscientious student, a combination that made him one of the extraordinarily unique students to pass the high school graduation exam.

“In the school I attended, it was rare for even one person to pass the certificate exam required to graduate from high school. In my village, I was that one person. It was so unusual in fact, that I was held up as a hero and carried high around the marketplace, adorned with garland, and vermillion. It was truly a huge celebration for the entire village.”

Rabindra left his village to attend the county’s first college, located in the city of Kathmandu. His arrival in the country’s capital was exhilarating, yet also disconcerting. While village life had not yet felt the changes of modernity, the city had transformed. He witnessed the blight of severe poverty for the first time in his life, and it troubled him deeply.

“I never met my grandparents, so I don’t know if my need to help the poor came from their practice. It just started naturally that I felt I needed to do something. I was in college when I first began to actively notice beggars in Kathmandu. I used to give them some of my pocket change.”

Seeing those street beggars left Rabindra distraught. The blatant desperation that drove them to the streets simply baffled him. He wondered why city dwellers were not taking care of each other. Why weren’t they doing what his parents and grandparents, indeed all of his ancestors, had done to sustain one another going all the way back to ancient and even prehistoric times?

Why weren’t they separating out a bit of their food at every meal and sharing it with those in need?

After graduating with an English degree, Rabindra was eager to become a journalist. As no graduate schools for journalism had opened in Nepal, he moved 800 miles away to Lahore, Pakistan.

“When I moved to Pakistan I was distressed to see even more poor people there than in Kathmandu. As I traveled on the bus through the city of Lahore, I saw Muslim mothers with four or five children begging on the street. Having grown up in a primarily Hindu country, I wasn’t familiar with Islam, and I observed them with great curiosity. When the bus stopped along the route, I was surprised to see people who also appeared to be very poor giving one or two rupees to those begging. This compelling image wouldn’t leave my mind. I would later come to learn that for Muslims, giving to others more needy than yourself is a practice known as Zak?t, one of the five pillars of Islam.”

After earning a master’s degree in Pakistan, Rabindra secured a prize job as a journalist for the BBC in London. Coming from Nepal, the opportunity was a dream. He and his wife settled in London and began having children, and it wasn’t long before they began raising them with all the trappings of a prosperous, western life.

The Key to Enrolling Others in What You’re Working On

The Key to Enrolling Others in What You’re Working On