This post is part of a series documenting entrepreneurship in Mexico and the companies that participated in the Unreasonable Mexico 2016 program.

According to the World Health Organization, 360 million people worldwide have disabling hearing loss, and the majority live in low- to middle-income countries. For children who experience hearing loss and deafness in developing countries, schooling is rare and social isolation is common. Consequently, adults with hearing loss experience much higher rates of unemployment, plunging them into a difficult economic situation.

In Mexico in particular, access to educational and vocational opportunities for deaf people is lacking. In many cases, though, the opportunity to learn sign language as a child could easily stymie the negative social and economic effects.

“I’m deaf by birth,” says Gerardo Monsivais González of Nuevo León, Mexico. “When I was in kindergarten, I struggled to understand. The same thing happened throughout primary school, secondary school, and high school. I just copied my classmates and went to speech therapy in the afternoons, but I still couldn’t comprehend much.”

According to the World Health Organization, 360 million people worldwide have disabling hearing loss. Tweet This Quote

It wasn’t until he entered university that he had access to sign language and sign language interpreters in his classes. There, he finally learned how he could best communicate with others.

“Sign language has helped me better comprehend the world,” says Monsivais. “I could learn more meanings of things, and I could make more friends.”

After completing university, Monsivais secured a job at a local company where he met Rocío Garza Gutiérrez. Through working closely with him at the office, Garza discovered an entirely new – and challenging – world of communication. “This is a community that confronts a lot of injustices,” she says. “They feel a type of discrimination that most people don’t experience. I felt a responsibility to do something.”

She started to realize how much she enjoyed helping her new colleague learn and how little fulfillment she received from her job otherwise.

“It was really hard to work at the new company, so every day Rocío trained me,” Monsivais recalls. “At the same time, she asked me a lot of questions about deaf culture. She was fascinated by it.”

Following her newfound fascination, Garza left the company to pursue a Ph.D. in inclusive education. Her thesis investigated the problem of labor inclusion of deaf employees, and she discovered that many children who are born deaf in Mexico don’t develop sign language skills within the critical age range between infancy and age six. As a result, these children grow up disconnected from society and scramble to catch up as adults.

In her research, Garza found that on average, 4,000 children are born deaf every year in Mexico. Of those she surveyed, only 11 percent learned Mexican Sign Language before they turned six years old, leading to unnecessary developmental repercussions. Monsivais, for example, didn’t learn Mexican Sign Language until he was 18 years old.

“No child should have to go through what Gerardo did,” says Garza. “Children who are deaf should have the same opportunities as those who can hear.”

Garza was determined to figure out how to reach as many deaf children in Mexico as possible. After finishing her thesis and graduating with her Ph.D., she began brainstorming ideas for a project while she searched for a job. Fortunately, in retrospect, she couldn’t find the right one. Instead, she dedicated all of her time to the project, brought Monsivais along for the ride, and together they co-founded Dilo en Señas in 2015.

Dilo en Señas is an intentionally simple and accessible game, which can be downloaded for free from the Apple Store or Google Play. Users are presented with seven categories to choose from: family, food, toys, animals, colors, numbers, and letters. Each category is played in the same way. A short video is played that demonstrates a sign. Then, you select its match from three images. If you choose incorrectly, you get another chance; if you get it right, you move on to the next video. In total, there are nearly 100 signs to practice. 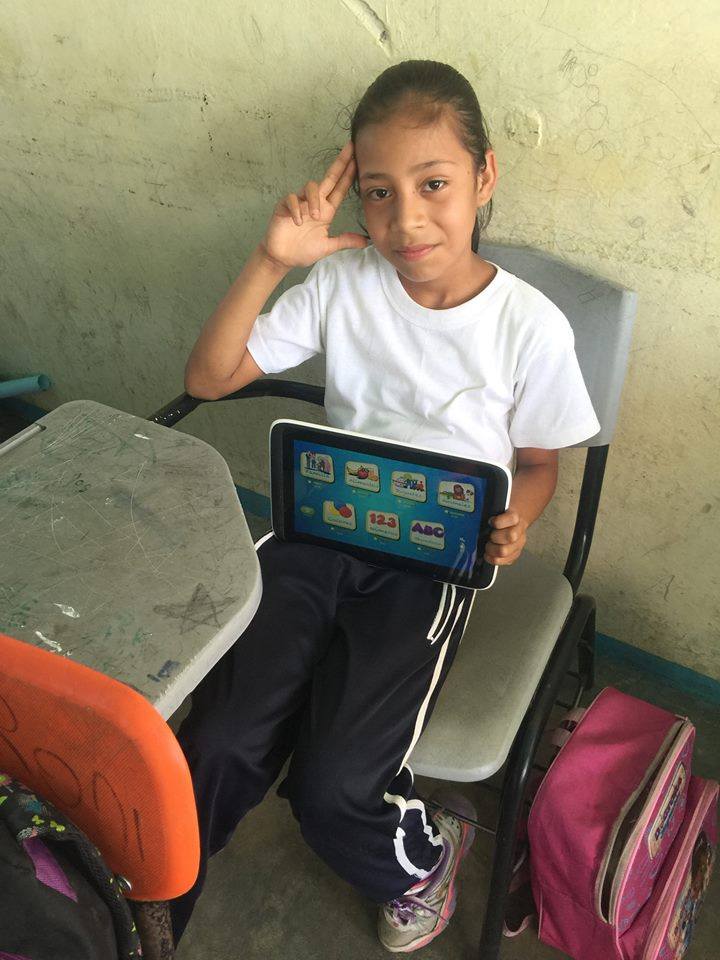 Within a week of its launch, the game placed third in Google Play’s top educational apps category for Mexico with no paid publicity.

“We didn’t want to be entrepreneurs,” says Garza. “We just wanted to do something to help.”

But what started as a side project quickly morphed into something much larger: To date, the app has already received over 91,000 downloads.

Although it was designed as a game for deaf children, anyone who wants to learn how to interact using Mexican Sign Language can play. In fact, Garza and Monsivais encourage it. According to them, one of the main problems in Mexico is that people don’t understand what it means to be deaf.

After such a successful launch, Garza and Monsivais were invited to participate in Unreasonable Mexico and Shark Tank Mexico, garnering even more positive exposure. Now, they are in the process of building a more viable business model, with long-term plans to expand across Latin America.

Children who are deaf should have the same opportunities as those who can hear. Tweet This Quote

In the meantime, the team is developing more signs and more products. Recently, they released an ongoing campaign of video tutorials on their website, Facebook, and YouTube. Dilo en Señas is also forming a partnership with a school that specializes in education for deaf children, so they can continue to research how children interact with their educational games in order to improve them.

“We want to become the Amazon for deaf people,” says Garza. “We don’t want to compete with what exists, but rather continue to offer more new resources that guarantee the rights of deaf people in Mexico to have the same learning opportunities.”

UX Design for Startups: Even Lemonade Stands Need a Strategy

UX Design for Startups: Even Lemonade Stands Need a Strategy