This post is part of a series of stories featuring the entrepreneurs who participated in Unreasonable Mexico’s 2015 program.

As Carlos Carreto was mowing his lawn one day, he noticed a soccer ball in his path. It distracted him, and suddenly, he felt a searing pain as his big toe got caught in the blades of the lawnmower. Suffering severe cuts, he contacted his godfather, who was an orthopedic doctor. Carreto needed to heal his injury fast because he was leaving soon for work in Chile.

His godfather did the best he could to mend his toe, gave him precise instructions on how to take care of the cuts, and told him to seek medical attention should things worsen.

Mexico has the lowest life expectancy of all 34 OECD countries. Tweet This Quote

Putting on his sock a few weeks later in Chile, Carreto noticed that his big toe was inflamed. Worried about infection, he went to the doctor as his godfather advised. The Chilean doctor wanted to know more about the injury, so he requested a Skype video call with Carreto’s godfather. Together, the two doctors determined the best course of action, and after heeding their recommendations, Carreto’s toe fully healed.

After this first-hand experience with telemedicine, Carreto later returned to Mexico determined to learn more. What he uncovered surprised him—no companies at the time were doing this in his country. He knew not everyone is so lucky to have doctors as family members or access to the kind of treatment he received, so Carreto decided to do something about it.

After reaching out to Paul Valera, a graphic designer, and Jorge Sánchez, a software engineer, in early 2014, Carreto and his two friends co-founded WeDoctors—a teleconsultation web platform and mobile app that connects patients to doctors in order to provide primary care consultations in Mexico. 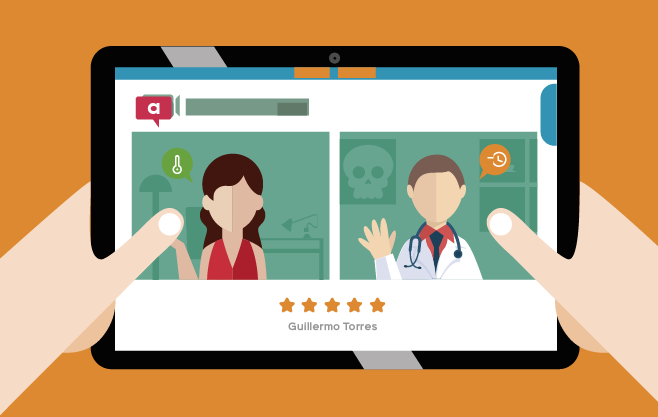 Graphic of the WeDoctors online platform

In 2012, Mexico achieved universal health care, and this was lauded as a big achievement for a developing country. However, access to affordable and high quality healthcare remains a pressing issue. Mexico has the lowest life expectancy of all 34 OECD countries. In 2013, Mexico spent 6.2% of its GDP on healthcare, well below the OECD average of 8.9%, ranking the country in the bottom three. Although the number of doctors per capita has risen in Mexico over the past decade, it still remains well below the OECD average.

“According to studies, for every 1,500 patients in Mexico, there are only two doctors,” said Sánchez, WeDoctors co-founder. “What motivates us is the desire to expand access to healthcare in Mexico. We really want to change the country in this area and bring quality healthcare services to all Mexicans.”

For every 1,500 patients in Mexico, there are only two doctors. Tweet This Quote

For many Mexicans, the nearest clinic could be an hour and a half away. If illness or injury strikes in the middle of the night, there is little these people can do quickly. Getting medical attention is not a convenient process.

“We’ve all gotten sick and had to wake up at 5 a.m. to go wait for an appointment,” said Sánchez. “And if they don’t get to you, you have to go back the next day. And if you do get an appointment, then you have to wait another three hours for a fifteen-minute consultation. This is worrying because you lose your whole day, and they don’t resolve your issue because there are twenty other people waiting before you, so you don’t get adequate medical attention. This is an urgent situation in Mexico.”

The WeDoctors team believes telemedicine is the best way to address this, and they have developed a simple service that is free for patients and doctors to sign up.

For many Mexicans, the nearest clinic can be an hour and a half away, making medical attention highly inconvenient. Tweet This Quote

A patient simply signs in with a name and email address and fills out a few questions about their medical history to serve as a benchmark. Then, the patient can search for doctors in a number of ways—including by location and specialization—and access their full profiles. The platform notes which doctors are online, in case of emergency.

Once the patient chooses a doctor relevant to their particular situation, a notification is sent to the doctor that they have been requested. If the doctor chooses to accept the request, the patient receives a request for payment upfront. Once the patient pays, WeDoctors allows the two parties to connect via a video call. The doctor can then access the patient’s medical records that were provided in the initial signup questionnaire. If needed, the doctor can write an electronic prescription and send it to the pharmacy closest to the patient. 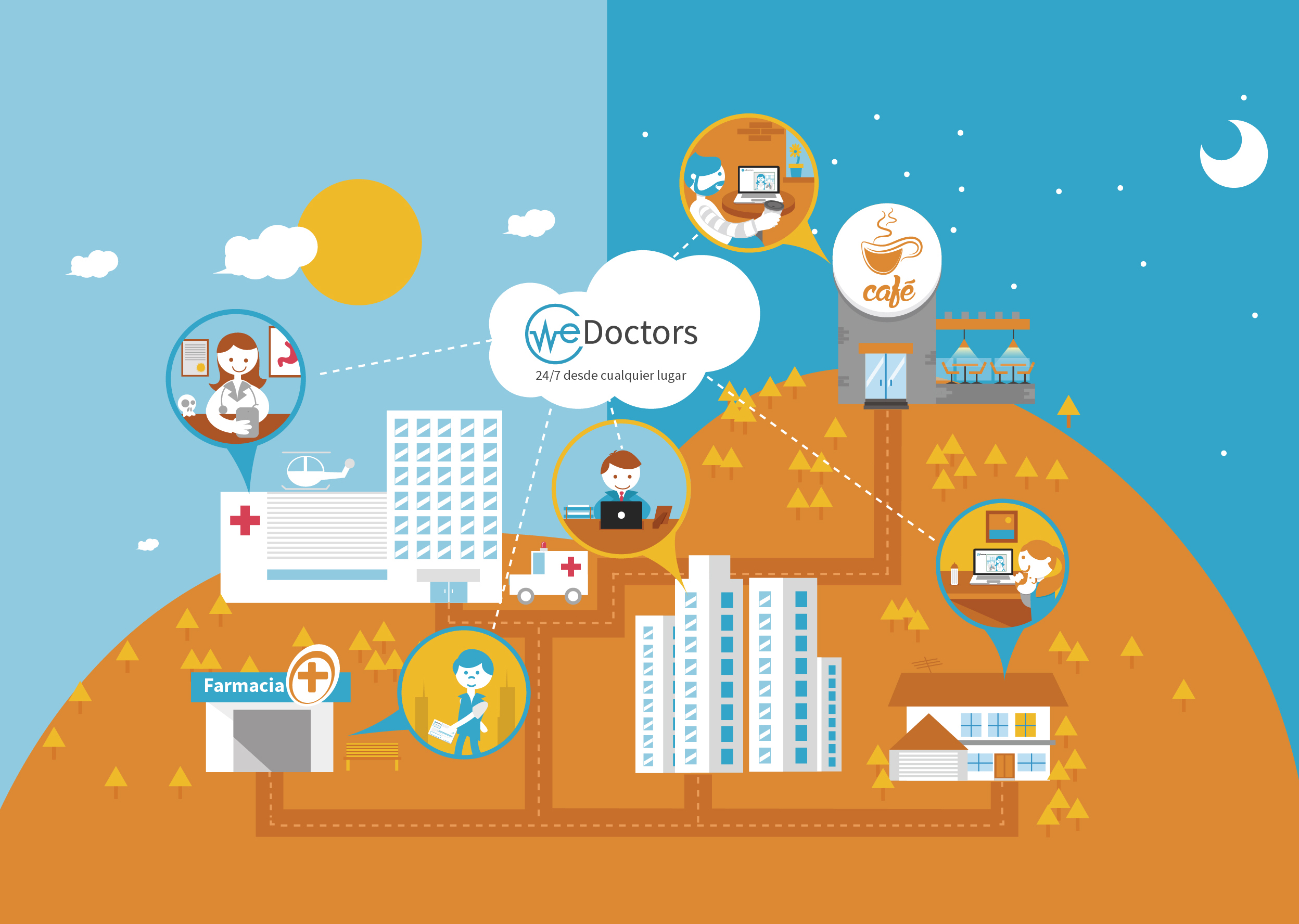 Graphic depicting the full WeDoctors ecosystem, from doctors to pharmacies to patients.

“More than anything, we want patients to know that WeDoctors finds trustworthy, quality doctors who will give them the best care,” said Sánchez. The team created a rating system for patients to fill out after each consult in order to monitor the performance of the doctors.

From start to finish, this process of signing up to finding a doctor to initiating a consultation can take as little as three minutes. Patients also have the option to schedule consultations at a day and time most convenient for them. Every time a patient has a consultation, it costs 150 pesos—approximately 9 USD. According to Sánchez, in Mexico a regular consultation can cost upwards of 1000 pesos, or just under 60 USD.

“In Mexico, you’re paying a lot of money for something that seems really simple, and then you have the wait times,” said Sánchez. “So this is a benefit we can bring to the patient—you don’t have to go anywhere; you have access to care 24 hours a day, no matter where you are.”

Telemedicine might be the best way to improve the quality of healthcare in Mexico. Tweet This Quote

The incentive for doctors to participate stems from the prospect of attracting new patients, generating a steady alternative income to their regular practice—but this time, they can do so from home or on their own time.

Currently, WeDoctors is about to launch the beta version of their platform to test the market and gather data on patient preferences. Over 100 patients have signed up as users, and they have 76 doctors ready to consult. The company is seeking to raise approximately 100,000 USD to cover costs as they carry out their pilot.

In addition to the three co-founders, WeDoctors includes Cornelio Sanchez in software development, Pablo Saenz in design and marketing, Fernanda Rossano in accounting and Anel Maldonado in design. The team is currently focusing on acquiring patients and doctors in cities with adequate Internet infrastructure, including Puebla, Queretaro, Guadalajara, Monterrey and Mexico City. But, they have big plans to expand across the entire country and become the number one platform for teleconsultation in Mexico.

“Our five-year vision is to have a million users and more than just an online presence,” said Sánchez. “We want to install kiosks throughout the country, especially in rural areas. We want to serve the whole country, offering everyone the healthcare services they deserve.”

Love What WeDoctors is Doing?

What the Democratization of Entrepreneurship Means for the World

What the Democratization of Entrepreneurship Means for the World