What the Colorado Floods Taught This Investor

Whether you are a first time entrepreneur or veteran startup mogul, it’s impossible to build something great alone.

The author of this post, Seth Levine, is a Boulder, CO based technology investor and managing director at Foundry Group.

I’ve been thinking a lot about the power of community over the last several weeks as a number of events have unfolded in and around my life that all served to reinforce the notion that no matter what we do, our work is supported and amplified in the context in which we do it. And that no matter how smart or successful we are, it’s impossible to build something great alone.

The recent floods were devastating to Colorado. They were both agonizingly slow in their build-up and incredibly fast in their destruction. I don’t know a person here who wasn’t affected. We saw entire towns literally washed away. And yet amid the devastation there was community. From neighbors helping each other tear out drywall in flooded basements, to friends helping barricade houses to protect them from water, to families opening up their homes to people whose houses were destroyed or inaccessible so they had a clean, dry place to stay, it was remarkable to see both how quickly and how generously the community reacted to help. It’s truly humbling to live amongst such generosity and spirit.

No matter how smart or successful we are, it’s impossible to build something great alone.

Another reminder of this was a gathering we had of over 100 executives from across the Foundry Group portfolio. This included most of the CEOs of the companies in which we’ve invested but also heads of product, marketing, sales, engineering, etc. The event was essentially crowd sourced by the attendees themselves (Foundry didn’t put this event on, it was proposed, designed and executed by executives from across the portfolio). The topics were varied – from the mundane (what’s the best way to open over seas operations) to the core (how can we grow faster) to the esoteric (what role does culture play in growing and building your organization). It was truly amazing to watch the interaction of this varied group of execs (who ranged in age from 20’s to 50’s and in experience from first time entrepreneurs to CEOs that had taken their companies public). The power of getting together with a group of peers with no expectation of outcome but with the belief that there was incredible learning to be gained by being open, by spending time together and by giving freely of advice and counsel was incredibly powerful. 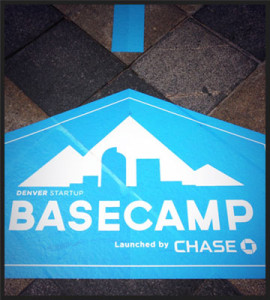 This gathering of Foundry execs took place amidst a larger event that was taking over Denver – Denver Startup Week. DSW was in many ways just a larger version of what we were doing with our portfolio executives. Thousands of people came together in Denver across a week of activities and events to help promote entrepreneurship in our town. A cornerstone of the week was “office hours” where over 50 mentors offered up their time – no strings attached – to help advise startups. Sitting in the Startup Base camp that had been set up for the week, participating in office hours and looking around the room at all these other people giving back to their community was really amazing. And a great reminder of the Democratization of Entrepreneurship – a theme I’ve been exploring both here on Unreasonable.is as well as my own blog. 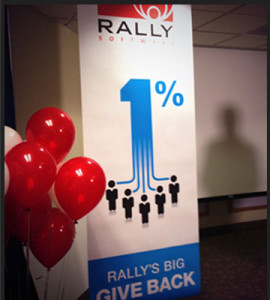 And finally was Rally Software’s “Big Give Back”. Rally was a founding member of an organization that I helped to start up called the Entrepreneurs Foundation of Colorado (part of the larger EF network) that encourages entrepreneurs and companies to give back to their communities through a gift of equity early on in their lives. Rally made this gift years ago and embraced the notion of social responsibility as part of their culture as the business grew. And when the company went public that early gift of equity turned into over $650,000 for local charities. The entire company gathered earlier this week to celebrate that gift as well as a similar sized gift that launched the Rally For Impact fund – an internal effort on Rally’s part to keep up their philanthropic efforts. I remember Ryan Martens starting what became Rally from our old offices above a restaurant in Superior. It’s amazing to think of both how far the business has come since then but also of the impact that they’ve had on their community – with their gift through EFCO and throughout the organization’s history. They embody everything that’s great about building a business responsibly.

These are obviously very disparate events, but they all center around the theme of community and serve as a recognition that whatever we do, we don’t do it in a vacuum. The more we recognize that, the more we give to those around us, the more we get back in return.

How 1 Website Is Disrupting Our Broken Social Services Programs

How 1 Website Is Disrupting Our Broken Social Services Programs

Seth is a Boulder, CO based technology investor and managing director at Foundry Group. His career spans venture capital investing as well as operational, transactional and advisory roles at both public and private companies.