What We Learned From Our Unreasonable Experiment in Global Scale

This post is a two-part series by Banks Benitez, Unreasonable Institute SVP of Global Expansion—first, reflecting on lessons learned from the launch of 5-day Labs around the world in 2015, and second, how this experiment in global scale looks moving forward.

The Unreasonable Institute team entered 2015 with some big questions to evaluate how we can scale and drive more impact as an organization. What would happen if we equipped and connected teams from every corner of the world that were dedicated to accelerating local, impact-driven entrepreneurs? How could we increase our rate of learning? How could we exponentially increase the number of entrepreneurs we accelerate every year? What was the best way to identify and select teams and locations for full-scale Unreasonable Institutes, like Unreasonable Mexico and Unreasonable East Africa?

When the year concluded, we didn’t necessarily have complete answers to these questions, but we did make progress by launching Unreasonable Labs—the experimental division of the Unreasonable Institute aimed at global scale. 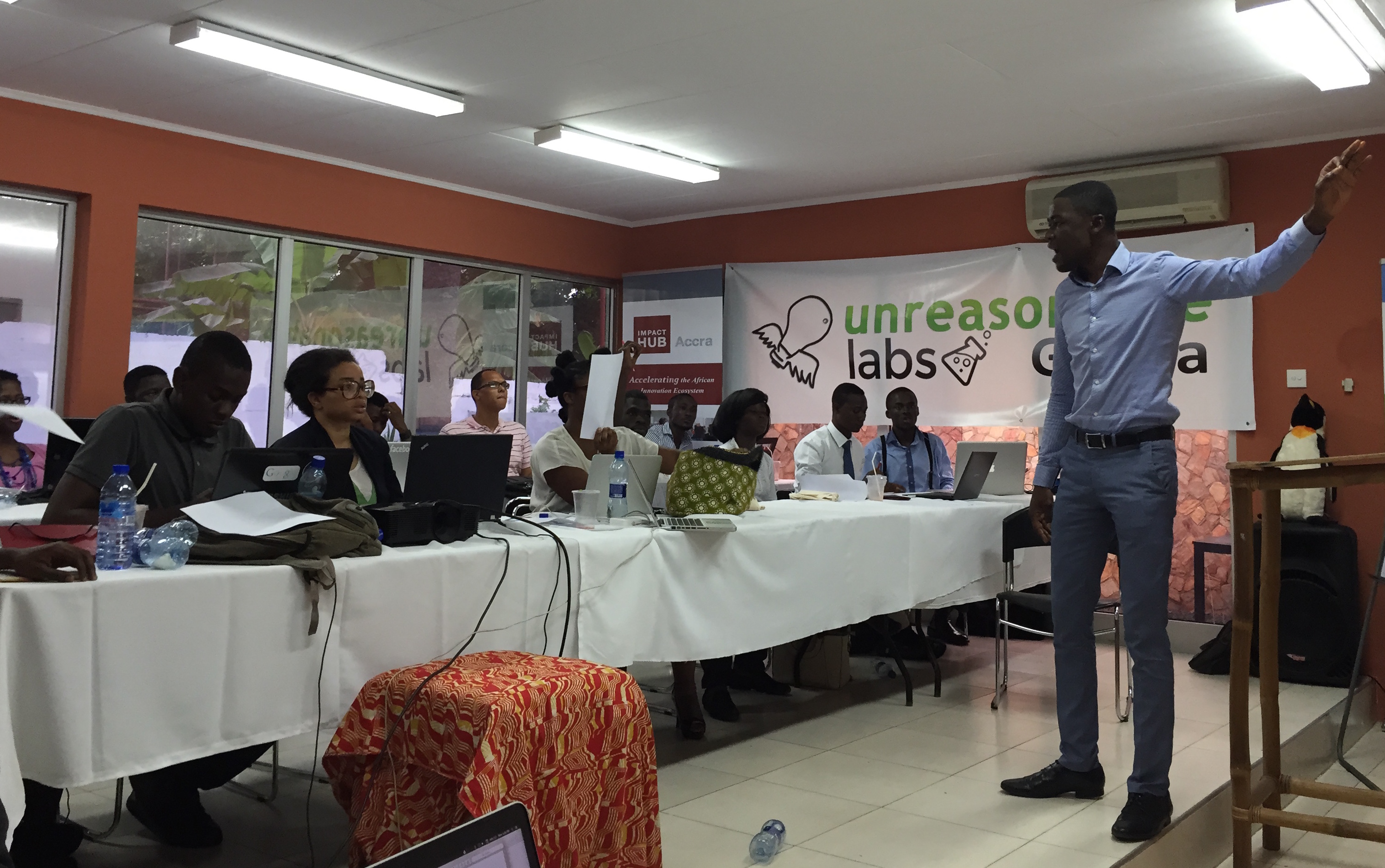 A session at Unreasonable Labs in Ghana.

In 2015, we selected 12 Labs in 10 countries, accelerating over 125 entrepreneurs in 7 languages. Tweet This Quote

In 2015 alone, the inaugural Unreasonable Labs received 150 applications from 60 countries; ran 12 Labs in 10 countries on 6 continents; accelerated over 125 entrepreneurs; and worked with over 120 Lab organizers and volunteers to pull it all off. Here are the four biggest lessons learned from our experiment in global scale.

Before any Labs ran in 2015, we worked hard to codify our curriculum so Lab Teams could access and use it. This curriculum was a useful starting point for all Lab Teams, but it was inspiring to see how they took our curriculum, adapted it, customized it, translated it, or even replaced parts of it—all with the goal to maximize its relevance and value for their entrepreneurs. In the process, our curriculum became 12 times better because it was more applicable within each local context.

In the past, we thought of ourselves at Unreasonable Institute HQ as the ones responsible for creating and disseminating curriculum. That seemed like something HQ should do. However, as Lab Teams adapted and customized curriculum, it quickly became apparent they were taking it to new heights. We discovered that letting go and allowing for the curriculum to be crowdsourced was a far more powerful (and faster) way to arrive at a product that was truly transformative for entrepreneurs.

2. Teams looked different, but were successful for similar reasons.

From Japan to Ghana, Boston to Morocco, and New Zealand to Ecuador, the teams that ran Labs looked surprisingly different. In Japan, for example, the team had a small core team of three (all with other full-time jobs) surrounded by 70 volunteers. In Morocco, the team was from the Moroccan Center for Innovation and Social Entrepreneurship, which opened their space and dedicated their staff’s time to run the Lab. In Boston, dozens of volunteers, united under the CityAwake organization, coalesced to run our first city-focused Unreasonable Lab. 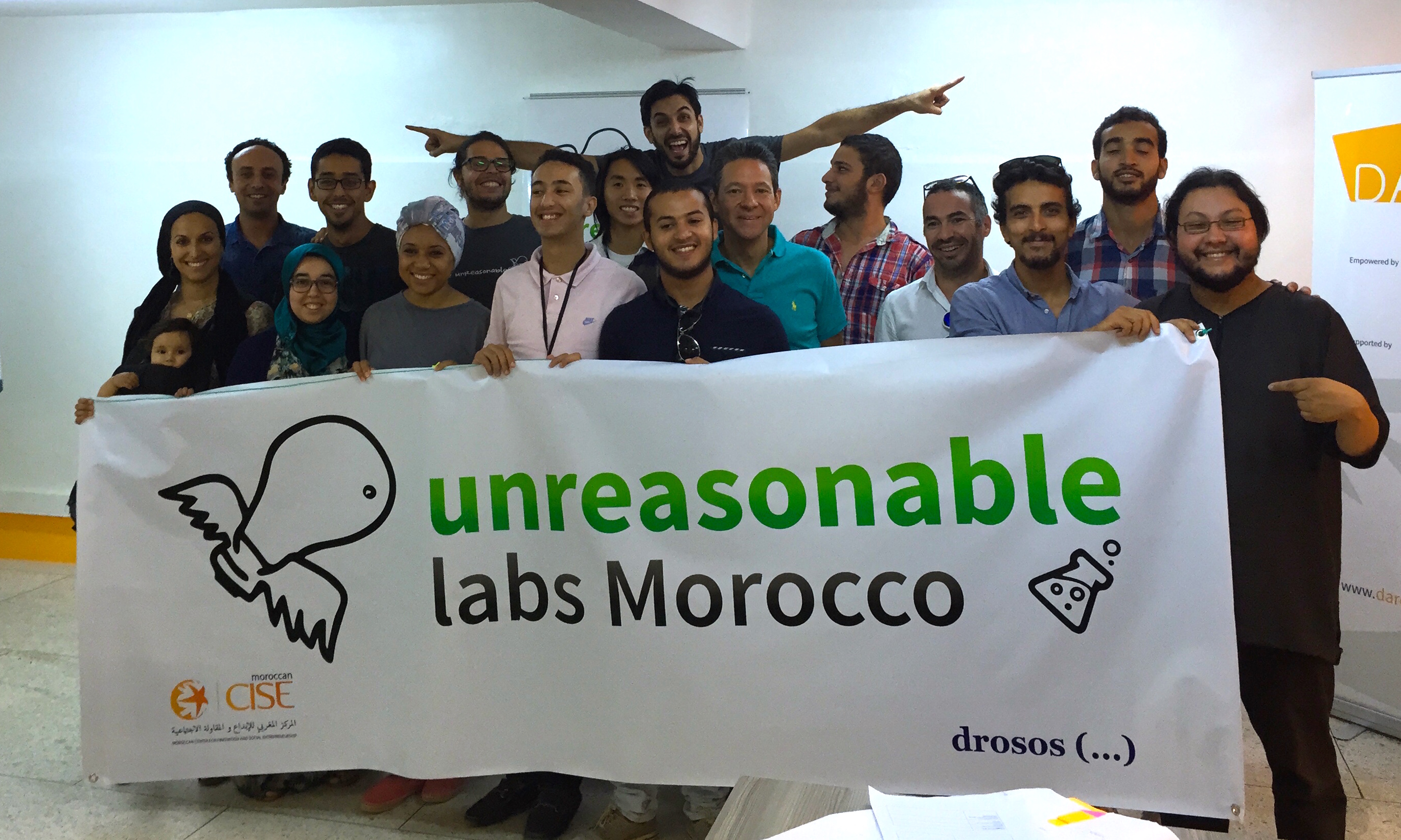 The team and participants from Unreasonable Labs Morocco.

Although the teams were different, they were successful for the same reasons. First, they made the Lab a priority, ensuring they had enough capacity to run the program and planning far enough in advance. Second, they had a high degree of operational and logistical excellence. Third, they were committed to ensuring entrepreneurs made significant progress over the course of the Lab. Finally, each team adapted the curriculum, added cultural flare, and made it their own. For example, in Morocco, the team delivered the Lab in three languages—Arabic, French, and English. In Ghana, the team added an additional orientation day before the Lab started, where entrepreneurs went on a team-building adventure outside of Accra.

We learned faster than we ever have before simply because we let go of control. Tweet This Quote

3. We are getting closer to product-market fit.

Unreasonable Labs is like a startup within the Unreasonable Institute. Like any startup, the first mission was to develop hypotheses around our target market and value proposition. After a year in-market working with customers (our Lab Teams), we’re now zeroing in on these two essential components. Our target market is an organization that works closely with impact-focused entrepreneurs in a given region, but does not have experience or expertise accelerating those entrepreneurs. A great example is a co-working space like an Impact Hub or a civil society organization that sees accelerating entrepreneurship as central to their mission of empowering a city or region. Our value proposition for this target customer is “an accelerator in a box,” where with our curriculum, expertise, and ongoing support, teams don’t have to reinvent the wheel. They can run a higher-quality program in less time. Plus, they are connected to a global community of Unreasonable startup organizers, entrepreneurs, mentors, and investors. A snapshot from Unreasonable New Zealand.

We also began to hone in on the type of HQ support most valuable for Lab Teams. In addition to use of the Unreasonable Institute brand and our tried-and-tested curriculum, they needed an end-to-end playbook, including everything from how to select entrepreneurs to how to fundraise. We provided systems like an application software, a Lab intranet where teams could connect with each other and serve as peer mentors, and use of the Unreasonable website to market their Lab. We offered constant and customized HQ support, from weekly calls to regular email updates to actually attending every Lab. In 2015, we were arguably too hands-off (because we were so busy) when it came to program managing the Lab cohort. We learned that having a Lab program manager is crucial to set up teams for success.

To make our curriculum better, we’re moving away from slide-decks and lectures. Tweet This Quote

4. We are uncovering what makes excellent curriculum.

We’re not there yet, but after so many iterations last year, we’re beginning to uncover what makes a curriculum truly valuable for entrepreneurs and their work. We’re moving away from slide-decks and anything that resembles a lecture. We’re adapting our curriculum to be 80% applied learning, with no more than 20% of any workshop being lecture. We’re also building more frameworks and tools that help entrepreneurs to self-mentor their way through a concept or exercise.

Overall, our inaugural Unreasonable Labs program was a successful, worthy experiment we will continue. With these four takeaways in mind, this year will see the second iteration of Unreasonable Labs. In my next post, I’ll announce our 2016 locations and talk about our strategy going forward. Stay tuned.

The Competitive Advantage of Giving a Damn

The Competitive Advantage of Giving a Damn

Banks is the Senior Vice President of Global Expansion at Uncharted (formerly the Unreasonable Institute), where he is charged with scaling Uncharted around the world. In his four years at the organization, he has played a variety of different roles: from entrepreneur recruiting and selection to managing the global mentor network to leading curriculum design. Now, he launches Labs, the experimental division of Uncharted, around the world. Banks is a Colorado native with a Bachelors in Economics from Vanderbilt University and a Masters of International Development from the University of Sydney in Australia.