You Gotta Get Out More

Spending hours on phone calls, emails, and meetings is a great start to solving the world’s big problems, but it is equally important to be humbled by nature because it will make you a better social innovator (and a better human).

Humans seem to think we’ve conquered nature (been there, done that).  Tweet This Quote

I was knocked out by the responses to my recent post on “Creating our Way to Well-Being,” particularly by the number of people who shared their relationships with nature. And, I was saddened by the stories of glorious times relegated to childhood, of the common realization that being in nature does calm and heal—yet the assumption that being in nature is rare, not real life, but a diversion from real life. One question, from Connor Driscoll, made me wonder with him again:

“Thanks for posting! I think this applies to everyone who desires to truly live and not just go through the motions each day…Cheryl, why is it that appreciation of nature is so overlooked?”

The short answer to that all-important question is, I don’t know. It makes no sense and is likely to be our fatal flaw as a species. The longer answer is, maybe because people haven’t experienced it, because modern life leaves no time for it, or maybe that something inside us knows but has forgotten, in the way that we’ve forgotten how to be empathetic and need to be taught again. Humans seem to think we’ve conquered nature (been there, done that), used it for our own needs and that it’s not as relevant today as keeping up with friends on facebook or twitter. 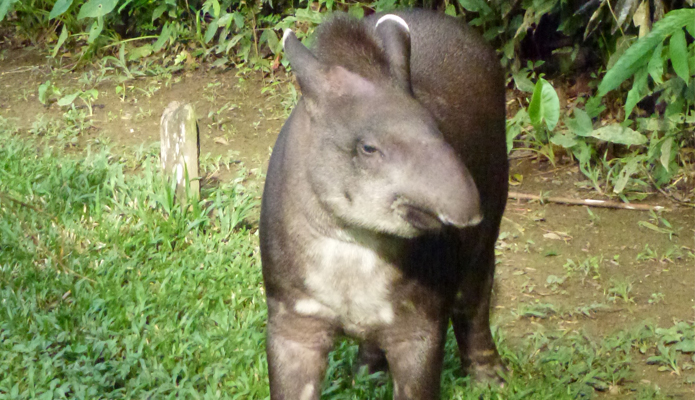 Sammy, the tapir, can be found eating bananas at the InkaTerra lodge in Maldovado, Peru. She is so beloved, she even has her own facebook page.

Thanks to Connor, and a trip I just took to the Andes mountains and the Amazon Jungle in Peru, I’m back with a request for you all to get involved.

Nature is amazing wherever you see it, from the dandelions that find purchase in the cracks of a city sidewalk, demonstrating a will to live and adaptability that inspires awe, to the trees on our streets that suffer the indignation of a thousand dogs lifting their legs on them, or the exotic flowering bushes from foreign lands that neighbors plant in their yards to make them special, without understanding that it’s native vegetation that supports our local ecosystems, not the stuff that comes from WalMart.

Nature found in national parks is breathtaking – so exciting, in fact, that we are usually forced to see it in the company of hoards of other tourists. It makes nature like a freak show – something so out of the ordinary that it’s a once-in-a-lifetime check off (Yes! I visited Yellowstone!! I have the tee shirt!!!). Stare at the buffalo from your car, don’t feed the bears, look at the strangeness and rarity of it all.

Then there is nature “in a box”, like at the California Academy of Sciences, where natural environments and their citizens are carefully recreated for millions of visitors to see. Wonderful as a learning opportunity and as an introduction, but heartbreaking if it substitutes for the real deal and is the only exposure to nature that visitors get. It’s nature controlled, tamed, put on exhibit as an amusement and diversion for city folks. It is my darkest fear that that will be the only wild nature left to us one day.

Most of what I suspect young Americans have seen is the nature that humans have manicured, restructured, contained.

Nature in Peru is life changing. The Andes mountains take your breath away (literally) with their beauty and altitude. The Amazon is the largest contiguous rain forest left on earth, called the lungs of the planet because it’s so important to our survival. Until you have stood in the jungle looking up at trees as tall as many urban buildings, filled with the sounds and sights of birds so colorful and rare they could be cartoon characters, with snakes and wild animals all around you watching with eyes you cannot see. Lagoons populated by electric eels, caimens (alligatorid crocodylians of course) and prehistoric stinky birds with claws on their wings. No app, no virtual reality, no game, no sci fi movie, nothing viewed on any screen that humans have or could ever invent comes close to the thrill of being among these creatures. It’s nature at a scale that will make everything else you worry about small.

We can’t serve a purpose greater than ourselves if we lack humility in the face of greatness.  Tweet This Quote

You should go and see them because they are disappearing, killed by human ignorance and greed. This is my request. Do not miss the trees on your walk to school. But do not mistake them for the majesty of which nature is capable. Get out. See it. (Be a responsible guest of nature when you’re there.) Fight with all your might to protect it. Answer Collin’s question for yourself. Start there.

We can’t change the world (except to harm it) when we don’t know it. And we can’t serve a purpose greater than ourselves if we lack humility in the face of greatness.

Here are some things to think about, to do and to read. They’re actually quite reasonable.

Our guide for the Peru trip was an extraordinary woman of Incan descent named Doris Valencia, founder of Habitats Peru. Get a group of friends together and call her to organize a tour.

It’s nature that will make everything else you worry about small.  Tweet This Quote

On Peru, a fact or two to put this amazing place in context. There have been remarkable civilizations in Peru from at least 3,000 BC—before the Egyptians were building pyramids. There were cities that flourished peacefully for more than 1,200 years (compare this to modern life where we can’t stop having wars for even a few years). The Incas peaked around 1,400 AD, a few hundred years before Shakespeare wrote his plays. These civilizations built cities, made art and left us extraordinary monuments to their accomplishments. Sure, we have cool stuff that they didn’t have but what did they know that we need to learn again?

Be good to Mama. Pachamama is a goddess revered by the indigenous people of the Andes. She is also known as the earth/time mother. She is also seen as nature itself. Thus, problems arise when people take too much from nature because they are taking too much from Pachamama.

Next time you need a reminder of how little we know about the world around us, read this.