Chasing A Dream: A Celebration of One Legend’s Life Work

Paul Polak and his “soul brothers” have a vision: bring radically affordable solar pumps to farmers in rural villages. Read this post to learn how this will transform livelihoods and radically reduce rural carbon emissions.

The author of this post, Paul Polak, has brought 20+ million farmers out of poverty. His work is dedicated to designing products for the 2.6 billion customers who live on less than $2/day.

A Note From Paul Polak:

This is the last paper my dear friend and soul brother, Jack Keller, wrote. He died recently at the age of 85 at an IDE social gathering, in the middle of an animated discussion on politics. He put down his wine glass, said he wasn’t feeling too well and collapsed in the arms of a fellow board member. He died doing what he loved, which is the way I hope to go when my time comes.

This article describes our dream of replacing millions of diesel pumps in the world with radically affordable solar pumps. In typical Jack Keller style, he included me, Bob Yoder, and Paul Soraci as co-authors, although he wrote every word of it.

His spirit will live on in my work.

Jack was a deeply spiritual, world class engineer who wasn’t afraid of getting his shoes dirty. Our collaboration on affordable solar pumping represents the way he lived all his life: dream big, make it happen and die trying. On the day he died, he flew to Denver from an IDE project in Honduras, ready to fly on after the Denver board meeting to pursue still another dream in Myanmar.

For me, this article represents a celebration of Jack’s life embedded in an expression of one of his dreams. His spirit will live on in my work. I hope you enjoy it and it allows you to capture some of Jack’s spirit for your own dreams as you read it.

If poor farmers in Ghana, India, or China want to water small plots of vegetables to sell in the local market, they break their backs hauling water in buckets or sprinkling cans from a nearby stream. It takes six hours a day, every other day, for three months to water 400 m2 (0.1 acre) of vegetables, which they hope to sell for $100 US. In India and Nepal, a treadle pump that costs less than $100 will irrigate as much as 0.2 ha (0.5 acre) with about six hours a day of work.

Farmers in Ghana, India, or China break their backs hauling water in buckets from a nearby stream.

A five-horsepower diesel pump can irrigate 1.0 ha (2.5 acres) of vegetables, but it costs $500, plus $450 a year for diesel fuel and another $150 a year for repairs, not counting the damage to the crop while the pump is waiting to be repaired.

What if the same farmers could use electric pumps, powered by solar photovoltaic panels, and drip irrigation to water 1 ha (2.5 acres) of vegetables? The fuel costs and operating costs would be pretty close to zero, but there’s a big catch. Currently, a solar PV-powered drip irrigation system of that size would cost about $10,000! The small farmers in Asia and Africa could never afford to buy one.

Who we are and what we do

We are a team of professionals dedicated to improving the income of the rural poor. We subscribe to zero-based design coupled with the relentless pursuit of affordability and a market-driven approach to accomplishing this. This development approach is outlined in a book that has just been released: The Business Solution to Poverty by Paul Polak and Mal Warwick. The basic premise of zero-based design is to begin from scratch and focus on searching out the most cost-effective solution for each component of the complete system.

Using the zero-based design approach, we decided that we could find a way to cut the retail cost of a solar-powered drip irrigation system to $4,000 for 1 ha (2.5 acres) of diversified off-season fruits, vegetables, and spices. That way, smallholder farmers could have food security for their families and clear at least $4,500, enough to make payments on a three-year loan or lease and put some real money in their pockets. By finding a way to achieve breakthrough affordability for PV-powered pumping and efficient irrigation, smallholder farmers all over the world could move out of poverty. At the same time, they could provide jobs for their neighbors in planting, weeding, harvesting, and marketing the crops they grow.

Today, in India alone, 19 million diesel engines are being used to pump irrigation water from shallow wells, spewing millions of tons of carbon into the atmosphere. If market forces could replace a quarter of them with radically affordable solar PV-powered pump systems and drip or mini-sprinkle irrigation, we could transform smallholder farmer livelihoods and radically reduce rural carbon emissions.

Farmers all over the world could move out of poverty.

Presently, we are in the process of developing cost-effective PV-based, low-pressure irrigation systems and establishing a commercial enterprise to promote their adoption by farmers in India and other Asian counties. Minimizing the energy requirements is essential for building a cost-effective PV-powered pumping system to irrigate crops. We are accomplishing this by applying a systems approach to optimize the energy and water flow components from the water supply to the irrigated crops. A small-plot drip irrigation system would be ideal.

How to Make Ends Meet

The best way to reach scale is to release market forces.

To afford a PV-powered pumping system supplying a low-cost drip system, and make a reasonable livelihood at the same time, smallholder farmers need to irrigate in the dry season, when vegetable prices are two or three times as high as they are during the rainy season, when everybody can grow vegetables. Savvy farmers plant four or five high-value crops because it’s impossible to predict what the market price for any one crop will be, and diversified cropping lowers both plant disease risks and market risks and increases the probability that at least one of the crops will generate a lucrative profit. Field tests in a variety of countries have demonstrated that typical farmers can earn a net income after expenses of $0.45 per square meter, or $4500 from 1 ha (2.5 acre) of diversified high-value cash crops, such as off-season vegetables in local urban markets. So it’s just as important to help farmers optimize their income as it is to lower the cost of pumping and improve the efficiency of conveying and applying water from its source to the crop.

The best way to reach scale is to release market forces, creating opportunities for every participant in the market to earn a reasonable profit. This includes the manufacturers of both the PV-powered pumping systems and the irrigation systems, the dealers who sell them, the technicians who install them, and the farmers who buy them to improve their livelihoods. 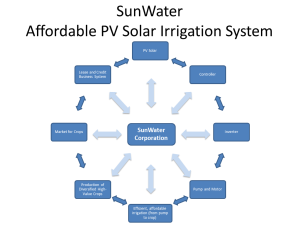 The first barrier to profitability is the capital cost of $4,000 for the total system. Even though it can earn attractive returns on investment, the upfront cost is too high for most smallholder farmers. For this reason, an important player in the system needs to be a business that offers solar PV-powered pumping and irrigation systems on a lease basis or on credit, with the lease/credit business also earning an attractive profit.

To energize this project and ultimately the market, a holding company called Paul Polak Enterprises has been formed. This company is partnering with volunteer engineers from Ball Aerospace, called the Design Revelation Employee Resource Group, headed by Paul Storaci. Ball Aerospace is providing workshop facilities, and staff engineers and technicians are donating their time and talents as a contribution to this initiative. These guys are good. Ball Aerospace built the instruments on the Hubble Space Telescope. Now they are charged with building the proof-of-concept prototype of the low-cost solar PV-powered pumping system.

Each dream starts with a first step.

Meanwhile, two of this feature’s co-authors—Jack Keller and Robert Yoder, world authorities on small-plot irrigation and development—are working on the design and beta testing of the total system, and the pilot commercial rollout in Gujarat, India. In India, we will be working with an Indian subsidiary of Paul Polak Enterprises that will play the local leadership role. From Gujarat, SunWater India will initiate a full-scale rollout of the affordable solar PV-powered pumping and irrigation system in India’s eastern states, where the majority of India’s 19 million diesel pumps are located. After we create a new market for solar PV-powered irrigation in India, our dream is to take it to other countries in Asia and throughout the world.

Each dream starts with a first step, and our first step was to raise $32,000 in an Indiegogo (crowd funding) campaign to fund the completion of the proof-of-concept prototype by the volunteer engineers at Ball Aerospace. That goal has been met. Stay tuned for the rest of the story.

Jack Keller’s article originally appeared in the November/December 2013 issue of Resource: Engineering and Technology for a Sustainable World, Vol. 20, No. 6, published by the American Society of Agricultural and Biological Engineers (ASABE) and copyright © 2013 by ASABE.

What A Truck Driver Knows About Saving the World

What A Truck Driver Knows About Saving the World