Democratizing Manufacturing by 3D Printing From Trash: Q&A with re:3D

Hundreds of millions of people still live in poverty without access to resources that would improve their livelihoods. Often, they have no choice but to rely on sporadic donations from aid agencies that may or may not actually address their needs.

What if every household could act as its own factory and personally manufacture exactly what it needed to thrive?

The world is not that far off from realizing this vision. Based in Austin, Texas, re:3D developed the world’s most affordable, large-scale 3D printer. Their flagship technology, the Gigabot, prints objects up to 30 times larger than competing desktop models for customers in over 50 countries around the world.

re:3D’s ultimate vision is to 3D print products from post-manufacturing trash, with the hopes of developing a more circular economy, stimulating new jobs, and unlocking new markets. Not only that, but for every 100 Gigabots delivered, re:3D donates a Gigabot to a group somewhere in the world that’s dedicated to improving their community.

Unreasonable sat down with re:3D co-founder, Samantha Snabes (who’s also a captain in the national guard and a former Social Entrepreneur in Residence at NASA) to discuss her vision that anyone, anywhere should have access to their own factory and be able to innovate on demand. 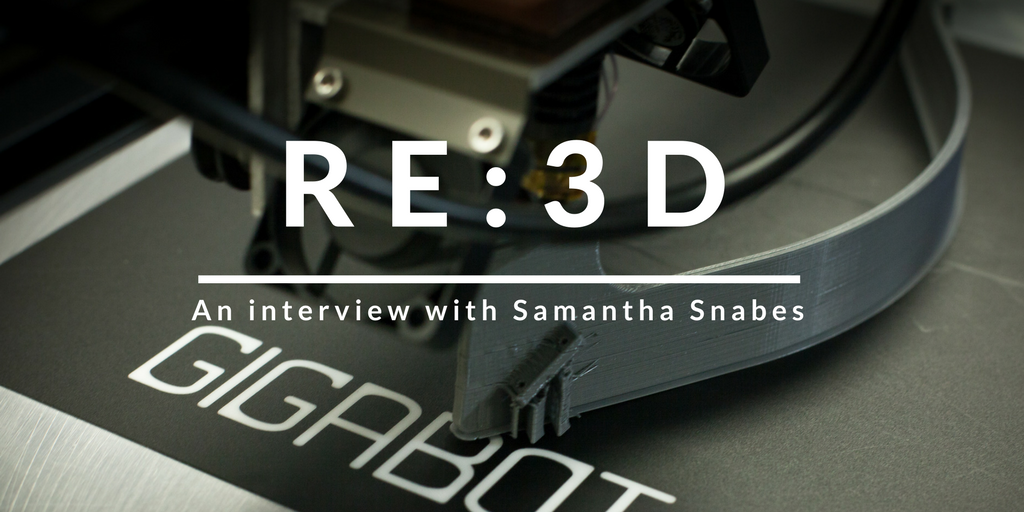 How did re:3D get started?

I was working with Engineers Without Borders, and we were traveling around Rwanda with some friends who were NASA scientists, engineers and astronauts. The first formative experience for what would later become re:3D was when we were visiting a hospital in Rwanda. We walked by this one part of the hospital, and there were mounds and mounds of electrical equipment and medical equipment sitting out in the sun in this huge pile. These were $100,000-200,000 machines, just sitting there.

The gentleman who was translating said, “Oh, it’s super common, we can’t use it.” And I asked why not. And he explained that because they are donations, often they’re the wrong voltage, they’re not a cultural fit, or they can’t be maintained. The list goes on. That was the first real development project I engaged in overseas. Then, in continuing efforts with Engineers Without Borders, with my role as a social entrepreneur in residence with NASA HQ, and also with my volunteering with Opportunity International, I realized I would see or hear about these instances again and again.

Then, over beer when we were still in Rwanda, Matthew [my eventual co-founder] and I started surmising about scenarios where people could just make their own stuff because what we were learning when we were traveling is that people are inherently creative. They want to explore, they want to solve their own problems, and they’re super motivated and capable.

So Matthew had been 3D printing at home on a little desktop printer because the maker movement was just kicking off with open source printers, and we both used them professionally at work. We started to talk about what it would look like if people could 3D print stuff, like it’s your own factory. My co-founder comes from a farm in Iowa, and I come from Detroit. We both really believe in opportunity and locally driven manufacturing, so that was probably a bias we carried.

Then, we started thinking about what people would fabricate for themselves, and the solutions we were seeing through the organizations we were involved with was that they were bigger than 6 inches. We looked across the landscape, and there literally wasn’t an affordable printer that was big.

So what were your first steps to get the idea off the ground?

We shared the idea online with a video, through a Jack Daniels competition of all things. We were finalists in that competition and had gotten a little bit of a following, so we took that idea and submitted it to Start-Up Chile. It was just kind of this idea we were sharing with our friends, who were about to become the team of re:3D.

When I got the letter from Start-Up Chile, I was shocked. In fact, my boss [at the time] found out about it before I did because he liked the Facebook status I was tagged in announcing our acceptance. Then, we had $40,000, and I was moving to Santiago. 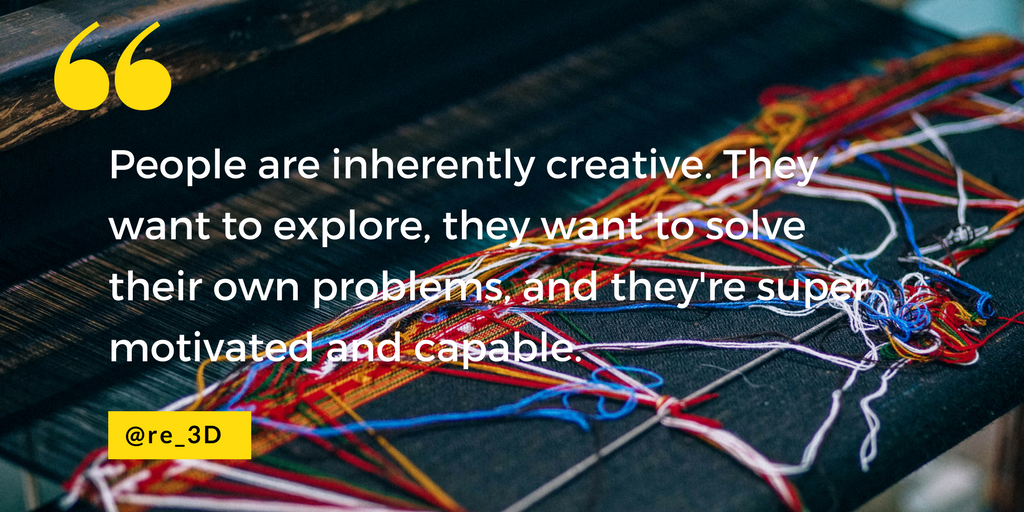 What was the first printer you created?

Matthew said he could do it in 8 weeks. So we ponied up some money, and I moved to Santiago under good faith that Matthew was going to get this done in 8 weeks. I arrived, and I said my co-founder was going to build the toilet-sized 3D printer and that it’s never been done before. I said we’re going to keep the price point under $10,000, and I’m going to put it on Kickstarter in 8 weeks.

I had also heard that Start-Up Chile had a booth at SXSW that year, and we were based in Texas. So in my second day at the program, when we were still giving our presentations, I went up to them and said, “I want my toilet-sized 3D printer at SXSW at your booth.” They said, “But it’s not done.” And I responded that it would be.

Matthew, who was still working at NASA and in a PhD program, started working on the nights and weekends and during any free time he had. Funny story is that we actually made the cutoff to get it to SXSW, but he built it in his house and realized it didn’t fit through the door, so he had to disassemble it, put it in his car, and reassemble it at SXSW. At that point, we still hadn’t picked the name for it, so the day it was going live we picked the one name we decided we didn’t want our competition to have. Luckily, we chose Gigabot because it’s a good one now. Right as the exhibit hall opened at SXSW, we went live on Kickstarter and somebody from TechCrunch walked by. Not even an hour or two later, they published an article, and we were on the cover. We met our funding goal in 27 hours.

So yes, Kickstarter was a huge part of how our product was commercialized, but Start-Up Chile literally drove us from idea to production.

What problem would you say you are trying to address?

There are people, whether they’re in a disadvantaged school in Detroit or in a hospital in Aleppo, who are either marginalized or just don’t have the money to buy stuff. Basically, they’re in a supply-constrained area. We think people should be able to innovate independently.

We sought to try and democratize manufacturing, and we think the easiest resource to power your own factory is trash. We also think it’s inherently right, and we think people shouldn’t have to have a dependency on other groups. They should be able to make their own vision.

That’s why we chose 3D printing and why we’re so passionate about it. It wasn’t until Kickstarter that we realized that this concept of a human-scale 3D printer had opportunity in a lot of different markets, like prosthetics. So it’s super exciting for us. 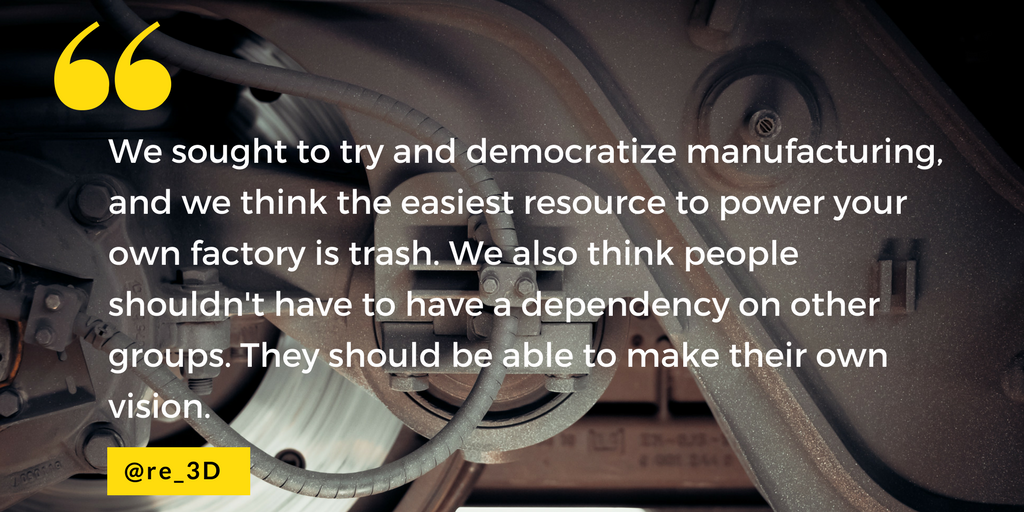 What do you get excited about for the future of re:3D?

I am very committed and passionate about at least trying to put some academic rigor and thought around what a 3D printer looks like in contested areas. So much so that I have volunteered, and will continue to do so, to see if either through defense or through U.S. aid or through re:3D there is an opportunity to explore that. And that’s an interesting conversation to have with your co-founder.

I’ve made it widely known in the defense community that I am their girl when they’re ready to have that conversation. It’s in line with re:3D’s mission, and it’s something that my team and I feel is an example of what we’re trying to accomplish, even if it’s extreme. But at re:3D, we believe our products and the way we do things should be as simple as possible. And if we can start to evolve our technology to be successful in that type of scenario, we know it will open up new opportunities for people worldwide.

So if anybody reading this knows of how we can partner with groups thinking about this, let us know. We think that there’s just a huge opportunity, whether it’s 3D printing landmines or IEDs for simulation and training and clearing, or making prosthetics and other medical resources for a clinic on site. If you really want to do this, you have to think beyond just one-offs and think about where 3D printing as a tool has a place.