“Mental health is everywhere. Recognized or not, it is there in every person, every community, every country.” It would be remiss of me to say that I have always believed in this. Mostly, it is because of my lived experience with mental illness. I think subverting conversations that are inherently unpopular is a travesty at best because it propagates fiction. Overwhelmingly, we don’t talk about the issues that demand open dialogue and mental health has found its way high up on that list.

My own troubles with mental illness began with Obsessive Compulsive Disorder (OCD), a debilitating disorder of the brain that causes severe anxiety. In its most basic form, there are obsessions and compulsions. Compulsions provide relief to the obsessions, which often invoke feelings of fear, danger, and anxiety. Compulsions are relieving, though ironically promulgate the severity and length of OCD by reinforcing an endless terror of a loop. The gold standard to recovery is to intentionally subject yourself to anxiety and then sit on your hands longer and longer without ritualizing. 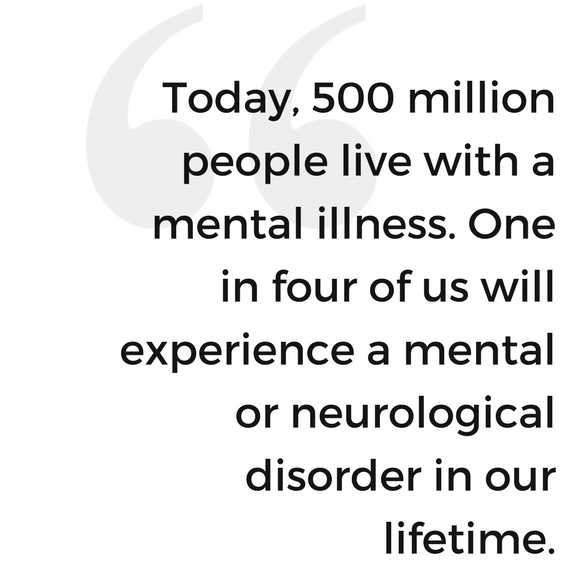 I have managed OCD since the age of 13, and I am not alone. Today, 500 million people live with a mental illness. One in four of us will experience a mental or neurological disorder in our lifetime. Mental, neurological, and substance use disorders now account for one in 10 years of lost health globally, while depression is the leading cause of disability worldwide. Thirty percent of people living in the U.S. do not receive adequate treatment. That number skyrockets to an astonishing 90 percent for low-income countries. People with severe mental disorders on average tend to live 10-25 years less when compared to their peers.

Almost half of the world’s population lives in countries where, on average, there is one psychotherapist for 200,000 or more people. Uganda, with a population of 35 million people, is home to just 30 psychiatrists. Ethiopia, a country of 85 million people, has just 16 psychiatrists. Clinical specialists converge towards major cities while those who live in rural centers are neglected.

It begs the question, what can be done to bridge this treatment gap?

One simple and wildly effective solution is task sharing: Use whoever is available in the community to offer services. Recruit and train local people to provide a range of healthcare interventions, while reallocating the few clinical specialists to act in a supervisory capacity and provide quality assurance. Why does it work? Because it goes against our conditioned brain lock of functional fixedness and more effectively mobilizes our seven billion strong.

Task sharing saw its start in the 1980s. In fact, Dr. Abhay and Rani Bang trained a group of local women in the basics of neonatal care (how to diagnose pneumonia – using an abacus to count breaths, how to resuscitate children and basic med administration). They then went where they were needed most, carrying but a small health pack. Infant mortality saw a fourfold decrease in two decades.

Sangath, an Indian-based organization, trains and empowers local community resources to provide appropriate healthcare services to many communities across India. Under the helm and leadership of global mental health guru, Vikram Patel, they are tireless advocates of mental health for all by involving all.

Last December, I attended their annual Leadership in Mental Health Course, and it transformed my life. In reference to working to bridge the treatment gap within global mental health, Patel shared, “We know the why, we know the what. We need more people engaging in the how.”

I took this call to arms literally and several weeks back excitedly launched mindfullwe, dedicated to providing people what they need to recover from common mental disorders via a step-by-step approach. Our pilot will take us to Uganda in the summer of 2017 to replicate the MANAS trial. Of those who seek care, 95 percent do so in primary health settings; the WHO promotes an integrated health-care delivery that prioritizes both mental and physical health. The root of the intervention is baked in empowering local people. We will collaborate with 2 primary health centers, recruit, train, and employ three lay health counsellors to assume non-drug responsibility, under the supervision and quality assurance of a clinical specialist.

I’m excited for the potential of task sharing in bridging the treatment gap but also its potential in reframing our relationship to other seemingly intractable problems. There are no bells or whistles – its magic lies in mobilizing a people that didn’t have a seat at the table. Task sharing subverts the need for expertise. As Patel says, by transitioning “from whining about what we do not have, to celebrating what we do, we move from being ‘under-resourced’ to being ‘richly-resourced.’”

Pavel is a social entrepreneur and founder of mindfullwe, a platform dedicated to treating those who struggle with mental illness by leveraging the power of community.