How Do We Ensure the SDGs Aren’t Just An Exercise?

or the last 35 years, I’ve been working with thousands of farmers around the world to help design and produce low-cost, income-generating products that have already moved more than 20 million people out of poverty. Through our work at iDE and D-Rev, we’ve come up with a number of affordable solutions, such as the $25 treadle pump and small $3 farm drip-irrigation systems.

Because of my work over the years, many people have asked for my opinion on the United Nations’ development goals. A major part of both the Millennium Development Goals (MDGs) and the newer Sustainable Development Goals (SDGs) has always been related to eliminating poverty. When the MDGs concluded in 2015, the global community celebrated that we succeeded in cutting poverty in half. However, the actual impact of the MDG movement on extreme poverty was close to nonexistent.

Not a Movement, but a Market

The main success in cutting extreme poverty came from China, when they moved toward a more market-based economy. According to the World Bank, about 72 percent of poverty reduction in the developing world in the past 30 years happened in China alone. Millions of people left rural areas and moved to the capital and coastal industrial cities, where amazing cutting-edge growth has developed. As a result, the country experienced tremendous economic growth. 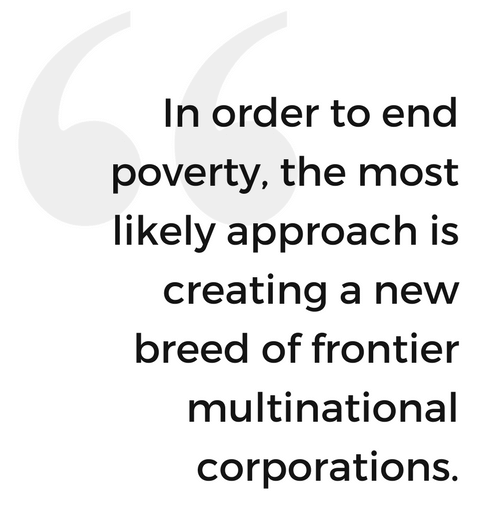 Long story short, a lot of people moved out of poverty in China as a result of this great market push, but they do not reflect what happened across the rest of the world. For example, even though the data shows that the percentage of the African population in extreme poverty fell, the number of impoverished people increased because of population growth.

Therefore, while it’s true that progress was made while the MDGs were in effect, I’m not convinced how much of it was directly influenced by the MDG movement. However, if you get everyone to agree that it’s important to end poverty, that’s a good thing.

In my opinion, this is the real question we should be asking: how do we as planet Earth devise ways to take people who are now in extreme poverty – anywhere from 800 million to over 2 billion people – and help them find ways to double their income? If the SDGs can do this as a movement, then I will be the first one to salute them.

A New Breed of Corporations

After messing around in this field for decades, what I’ve come away with is that the most practical, effective way to end poverty is to create new markets that are scalable and allow people who are poor to be the major players (buyers and sellers). It turns out that multinational corporations are the most skilled at creating new markets and have had the best results.

Take computers as an example. Before personal computers became popular, the only ones that were available filled half a room at a university. Now, we have a greater amount of power in the palm of our hand. The most transformative breakthroughs require a radical disruption in size and cost. We’re experiencing a movement toward miniaturization and affordability. That’s the revolution. But it’s far more than coming up with the technology. Once you have the technology, you have to set up supply chains, marketing programs, and more.

Thus, in order to end poverty, the most likely approach is creating a new breed of frontier multinational corporations. Listed below are the two key characteristics that I believe these companies need to embody:

Mobile phone providers have come closest to this new species of corporation. They have had a major impact on poverty, but it wasn’t their mission from the beginning. Many other companies have already started a similar restructuring. Take Toyota, for example. Their Prius has never made a dime for the company, but it’s created a brand identity for Toyota that’s priceless, and now we have electric cars.

Honestly, it’s unrealistic to think we can wipe poverty out, because there will continue to be more people whose needs can’t be met. But I do believe a shift in structure and function of multinational corporations is possible, and in fact, it’s the only way they can survive.

I’m devoting the rest of my life to creating three companies with the above characteristics – one focused on clean drinking water and two focused on clean energy. If they are successful, though, then that’s the biggest impact on poverty that I can possibly imagine because I hope it will stimulate 100 or 1,000 more similar companies.

Rallying around the SDGs is not a bad idea if it’s all about shooting for the moon to end poverty and achieve the other goals, too. However, without a clear vision that’s scalable and implementable – and that creates new markets that enable poor people to double their income – then it’s all an exercise.

The Startup That Will Change the Way China Feeds Its Cities

The Startup That Will Change the Way China Feeds Its Cities