Fundraising While Female: And the Realm of What’s Appropriate

A little over a month ago I went through an unusual breakup – it was kind, loving, and rooted in mutual admiration and respect – we just weren’t right for each other. While reflecting with a friend and getting used to being single again, I was surprised to hear myself say, “you know one thing I am excited about? I’m excited to have someone tell me I’m beautiful.”

Though an extraordinary human of many talents, verbosity was not a trait my recent ex possessed, and “you’re beautiful” were not words I was accustomed to hearing. They were also not words I had previously realized I wanted so badly to hear.

When I imagined being told I was beautiful, I hoped it would come from a crush or a lover who knew me well and was referring to a beauty that was rooted in more than physical appearance. Maybe this would take place over coffee at sunrise, during a spirited conversation over dinner, after a long run, during which we got hopelessly and blissfully lost in the hills, or halfway through an elaborate self-constructed obstacle course or scavenger hunt – but I mean whatever, I’m not picky…

Be Careful What You Wish For

What I didn’t expect was that the first time I would be called beautiful post-breakup would be at the beginning of a professional meeting with an older man who I was approaching for funding for my organization.

Companies with women in leadership outperform those that don’t, and yet only 3% of VC funding goes to women-led startups. Tweet This Quote

I founded Resonate when I was 26 and I have spent the last 3 years slowly building up my confidence in these types of funder meetings. It took me a while to get comfortable enough to truly spend the first part of a meeting connecting with, and getting to know the person I was sitting across from without nervously rehearsing my talking points in my head while stiffly engaging in awkward “nice weather today” small talk. I know now that it’s a much more enjoyable experience for everyone involved if there is time to connect as individuals. After all, whomever the funder is that I’m sitting across from has chosen to dedicate their profession, time, and often their own wealth to supporting causes that we both care about. Talking about Resonate’s work with someone else who cares as much as I do is one of my very favorite things. 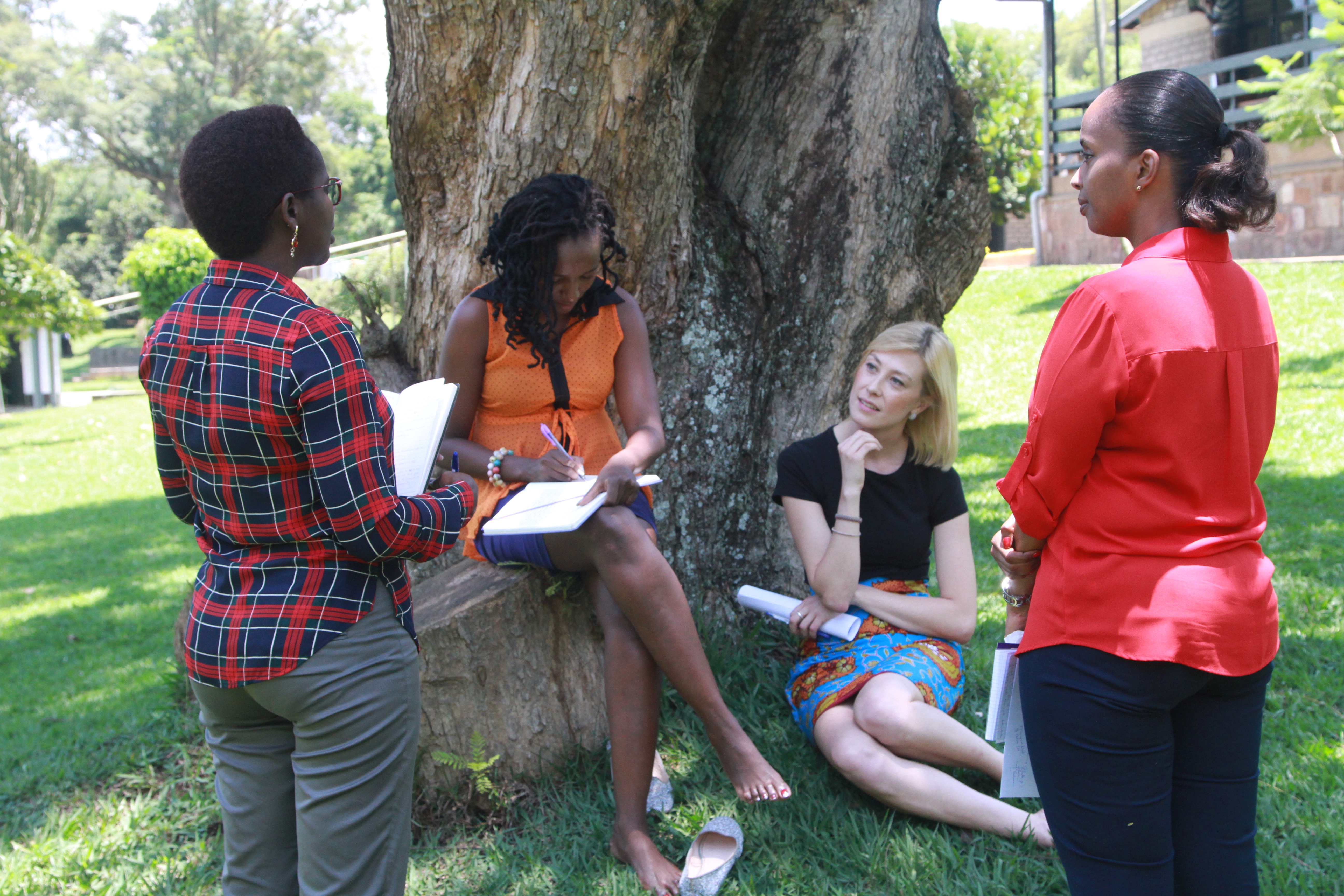 Resonate’s workshop teach storytelling and leadership to women and girls in Rwanda. // Photo from Resonate

But I’m not always totally at ease; these meetings are high stakes! I care deeply about the work that I do and spend every day thinking about what we can do better, how we increase our impact, and how I can support my amazing team that works tirelessly to build the capacity and leadership of vulnerable women and girls in East Africa. Sometimes – like right now – we have a budget gap we need to fill before the end of the year, and there is pressure to make the most of the short time I have with someone who has the power to provide Resonate with the resources we need to keep the lights on.

My expectation in building relationships with funders is that the connection is rooted in mutual professional respect for one another. But when a meeting starts with a remark on my physical appearance, it reinforces the power dynamics at play – especially the gender dynamics.

It’s lovely what they sometimes say about fundraising: the funder may have the money, but you as the

We need to carefully consider the experience of what it’s like to be a woman trying to raise money. Tweet This Quote

fundraiser are giving them the opportunity to invest in something they care about! While this may be true to an extent, it’s irresponsible to deny the power that comes from access to money and resources. This power dynamic is exacerbated by the fact that I am young and female.

I feel an incredible pressure to present myself as professional and mature, cram especially hard so that no one can call me on “not knowing my numbers,” and avoid the many undermining societally ingrained habits that can make women be perceived as less credible. I cringe every time I hear an undercutting, “I just,” or “I think,” slip out of my mouth. I make a mental note if I apologize for something for which I am not sorry, or detect upspeak or vocal fry at the end of my sentences. In many ways, when it comes to attracting either donation dollars or investment capital, the odds are stacked against women entrepreneurs.

And we haven’t even yet addressed the issue of sexualization.

In March of 2014, I was returning to the US for my first attempt at fundraising after launching Resonate’s pilot in Kigali, Rwanda. I called a few friends to ask for advice. One friend had recently had a conversation with a female founder about how she had approached fundraising and he passed along her advice: get yourself into the daughter box – quickly.

I cringe every time I hear an undercutting, “I just,” or “I think,” slip out of my mouth. Tweet This Quote

“What? What does that even mean?” I shot back.

“You know, make them think of you as their daughter so the funder dudes don’t like…hit on you,” he responded nonchalantly.

I paused. Call me naïve, but it honestly hadn’t occurred to me that in addition to figuring out how to run an organization, how to build a team, how to present my work credibly, and how to raise the money to sustain it, that I would also have to stave off the romantic advances of my supporters. 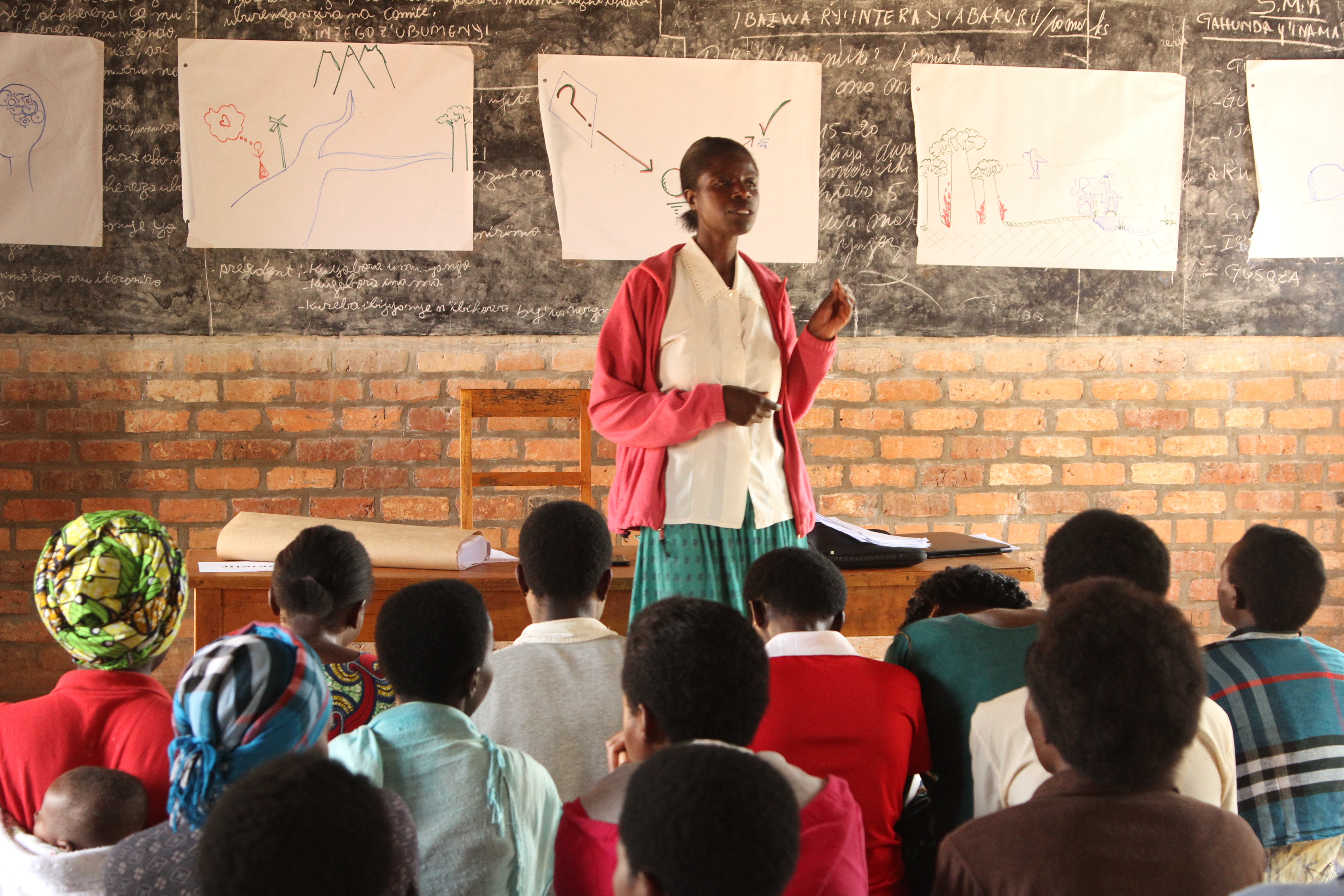 In addition to building and growing Resonate, Schlosser didn’t expect staving off romantic advances to be one of her responsibilities. // Photo from Resonate

But here’s the thing – I don’t want to be in “the daughter box,” because that undermines my experience and my credibility. So where does that leave me?

You guessed it: on a couch across from a man who represents a foundation from whom I am seeking funding who has just voiced his opinion about my physical appearance.

In the case of this particular man (and in the case of most of the others who have made similar comments,) I don’t think he had any intention of making advances on me. In fact, he probably thought he was being polite and complimentary. But it doesn’t matter. Because once he said those words he had unlocked in my brain a whole spiral of self-doubt that goes a little like this:

The only reason he is meeting with me is because he thinks I’m pretty.
Does he even care about our work?
If I make it clear I am upset or uninterested, will he be uncomfortable and withhold funding?
If he does remain interested and even gives us money, how can I trust that it is based on his belief in our work and not attraction?
If that’s the case, do I even want the money?
If I walk away from this meeting or this money, will I be able to find it somewhere else?

After conversations with many other female fundraisers and founders, I am quite confident that this is not a unique experience. Everyone I spoke with has her stories of inappropriate behavior ranging from a passing comment, to a lingering hug, to unwanted pursuit or sexual assault. But what I realized when I brought this up with male colleagues is that they were surprised to hear how often these types of interactions were happening, and even more so to get a window into what a negative impact these words and actions can have on the confidence and careers of the woman on the receiving end of what they think is merely a compliment.

Everyone I spoke with has her stories of inappropriate behavior ranging from a passing comment, to a lingering hug, to unwanted pursuit or sexual assault. Tweet This Quote

What Not to Say

There has been plenty of research about how companies with women in leadership outperform those without, and yet only 3 percent of VC funding goes to women-led startups. The business case for investing in women entrepreneurs makes sense – but we also need to look at the human case. We need to carefully consider the experience of what it’s like to be a woman trying to raise money.

Here are a few things not to mention when in a meeting with a female entrepreneur:

A few days after the meeting in question, I sat down for another conversation with a potential funder. We didn’t talk for too long, but the funder listened intently, asked me complex questions that pushed me in my thinking, and was enthusiastic about our aspirations for impact.

At the end of our conversation the funder looked me directly in the eye and said, “I’ve really enjoyed having the chance to talk with you. Thank you for your important work.”

Whether or not the meeting results in funding, that individual has already made a contribution to Resonate. I left, and practically skipped away feeling reassured, proud of my team and what we’ve achieved, and encouraged to continue with even more conviction. I left the meeting feeling respected, confident – and beautiful.

Ayla Schlosser is the Co-founder & CEO of Resonate, an organization that empowers women and girls through storytelling, working with them to build self-confidence and unlock leadership potential. She is a feminist, a storyteller, and an adamant purveyor of equality, empathy, and good vibes.