Radical affordability has always been a critical component of the “design for the other 90 percent” movement. But does affordability always come at the expense of efficiency?

The most direct path to radical affordability is improved efficiency. Tweet This Quote

Over many years, I’ve learned repeatedly that just the opposite is true—the most direct path to radical affordability is improved efficiency. We have been able to prove that in most cases, the assumption that affordability and efficiency are contradictory is wrong. In fact, efficiency dramatically improves affordability. After developing low-cost treadle pumps and solar irrigation systems for small farms with this mindset, lately we’ve been focusing on producing a competitor to coal—from biomass.

Paul Polak on a treadle pump.

The world consumes 6 billion tons of coal each year, accounting for 40% of global carbon emissions. At the same time, 4 billion tons of agricultural waste are produced annually, of which approximately 1 billion tons are likely available for conversion to a green biofuel substitute. With world energy consumption projected to increase by 56% over the next 30 years, a wide variety of utilities and thermal plants around the world have faced mounting pressure to cut carbon emissions or find coal substitutes.

However, even though we understand the problems associated with global carbon emissions, it’s not that easy to just say coal is bad and let’s replace it. For decades, coal has been a cheap and highly cost effective source of energy, especially for people running big utility plants. Thus, we have to find a replacement to coal that’s just as cost effective without the negative effects.

World energy consumption is projected to increase by 56% over the next 30 years. Tweet This Quote

To tackle this design challenge, we asked this question: if so much agricultural waste is produced every year, then how do you get this waste biomass and convert it to a blackened product with thermal density competitive with coal, but without the carbon emissions?

To start, we chased a bunch of sources of biomass, from water hyacinth to rice straw to cotton stalks. Water hyacinth was readily available, but its 95% water content meant it cost too much to dry it to 10% moisture content. World agriculture produces 800 million tons of agricultural waste per year, making it one of the largest sources of waste biomass, but farmers put a high price on it because it has competing uses (as animal feed such as bedding for animals and thatch for roofs). Cotton stalks were also readily available because farmers needed to get rid of them quickly to make room for their next planting cycle. But, they weren’t as thermally dense as we needed them to be, either.

We have to find a replacement to coal that’s just as cost effective without the negative effects. Tweet This Quote

By examining cotton stalks, though, we discovered a key expense we didn’t expect at all—the collection cost of the biomass. When biomass is in its bulkiest form, it’s often hauled from 200 kilometers (124 miles) to a centralized plant, contributing 40% to the cost of the plant. So, to make biomass more affordable, our design strategy was to shorten the collection radius—no more than 4 kilometers (2.5 miles).

So, not only did we have to find thermally dense biomass that would be an attractive substitute for coal, but we also had to start looking for plants you could harvest a hell of a lot of in a small space. Long story short, there are only a few agricultural waste materials that fit these critical density characteristics. 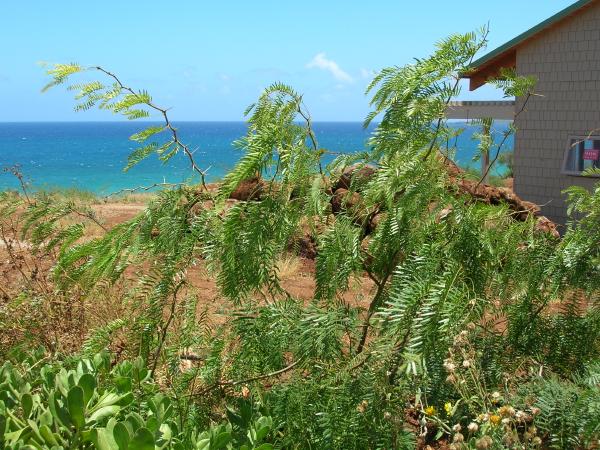 After this realization, we asked, what is nature’s most efficient biomass production system? The answer: invasive species.

When you look up the definition of “invasive species,” it often refers to the way they disrupt or damage the environment in an unwelcome way. However, these are welcome labels for a creative entrepreneur. Invasive species of plants succeed because they outcompete other plants in the same environmental context, often growing rapidly. Natural selection has helped these plants evolve to survive in extreme conditions.

Torrefaction turns what used to be a 300 million year process into 3 hours. Tweet This Quote

One thermally dense invasive species we found, mesquite, grows abundantly across dry areas of Texas. The root of a mesquite plant can grow to 165 feet long, reaching water sources much deeper than the average plant. It’s a nitrogen fixing plant, meaning it converts nitrogen from the air into ammonia, which helps fertilize otherwise poor soil. When it’s mature, it can produce 80 tons per hectare—much more than most other plants we have examined so far, making for a small collection radius and lower costs. 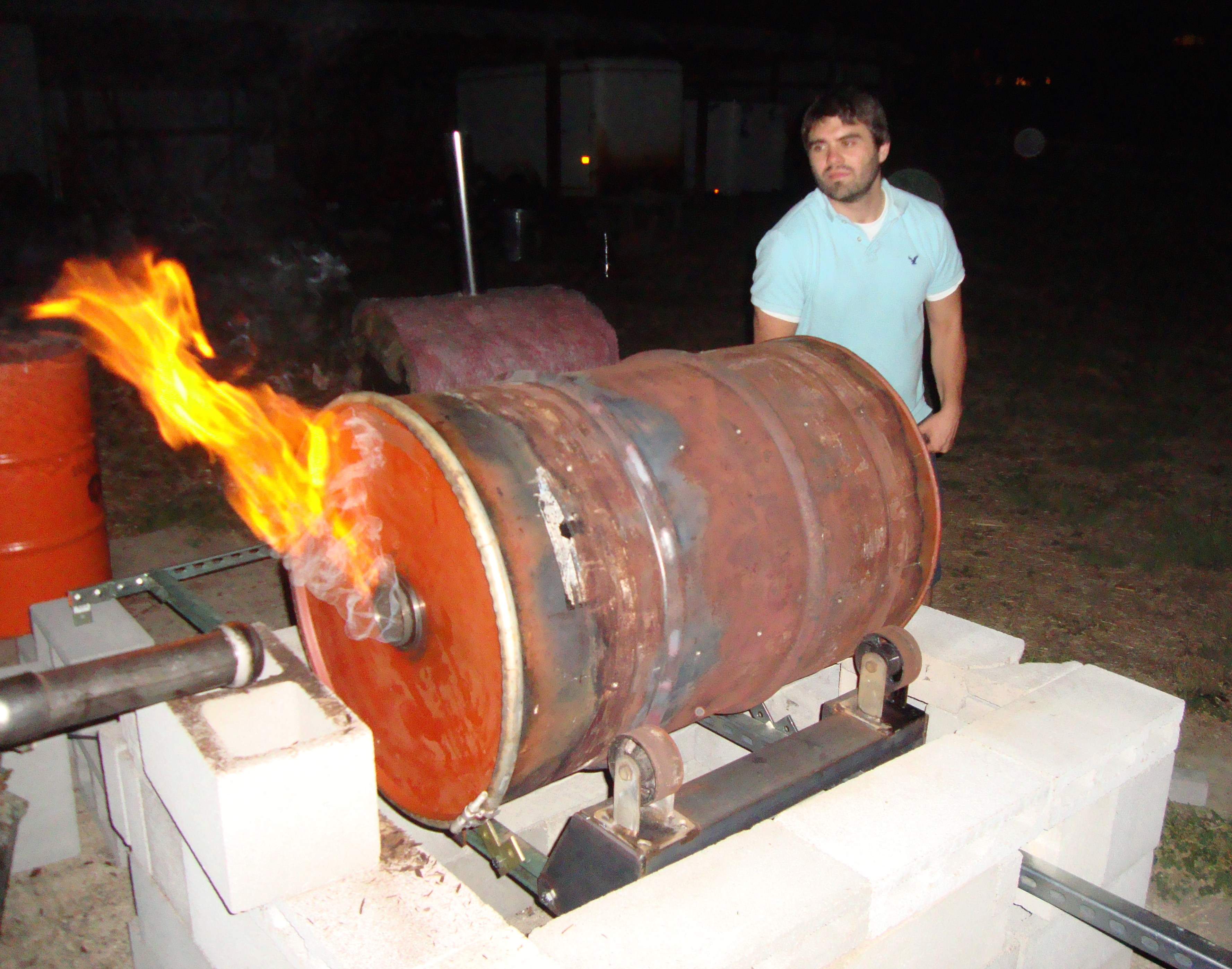 Gases flaring off from a prototype of the torrefaction kiln.

Now, with the right invasive species biomass, we can turn it into a thermally dense green energy through the process of torrefaction—a thermochemical treatment that heats biomass between 200 and 320 degrees C for three hours in an oxygen-free environment. It’s essentially the same process that roasts our coffee beans. Through torrefaction, the mesquite turns into a blackened material and loses 30% of its weight, but only 10% of its energy, increasing its energy density and making it easier to compress into briquettes. My team and I have been able to use torrefaction to transform this invasive species into a product competitive in energy to the coal widely used in India today.

We have to mimic Mother Nature and select the most efficient growing systems she produces. Tweet This Quote

As we continue to work on this technology, these briquettes will be able to burn just as much energy as coal. We could even mix them with coal at a utility plant, replacing up to 80% of its coal with a clean, competitive low-carbon emission substitute. Torrefaction turns what used to be a 300 million year process into 3 hours, and we keep more of the carbon from oil, coal and natural gas sequestered underground. The potential to replace coal is unlimited, and if we’re able to continue this process successfully, we can lower global carbon emissions by 20%. 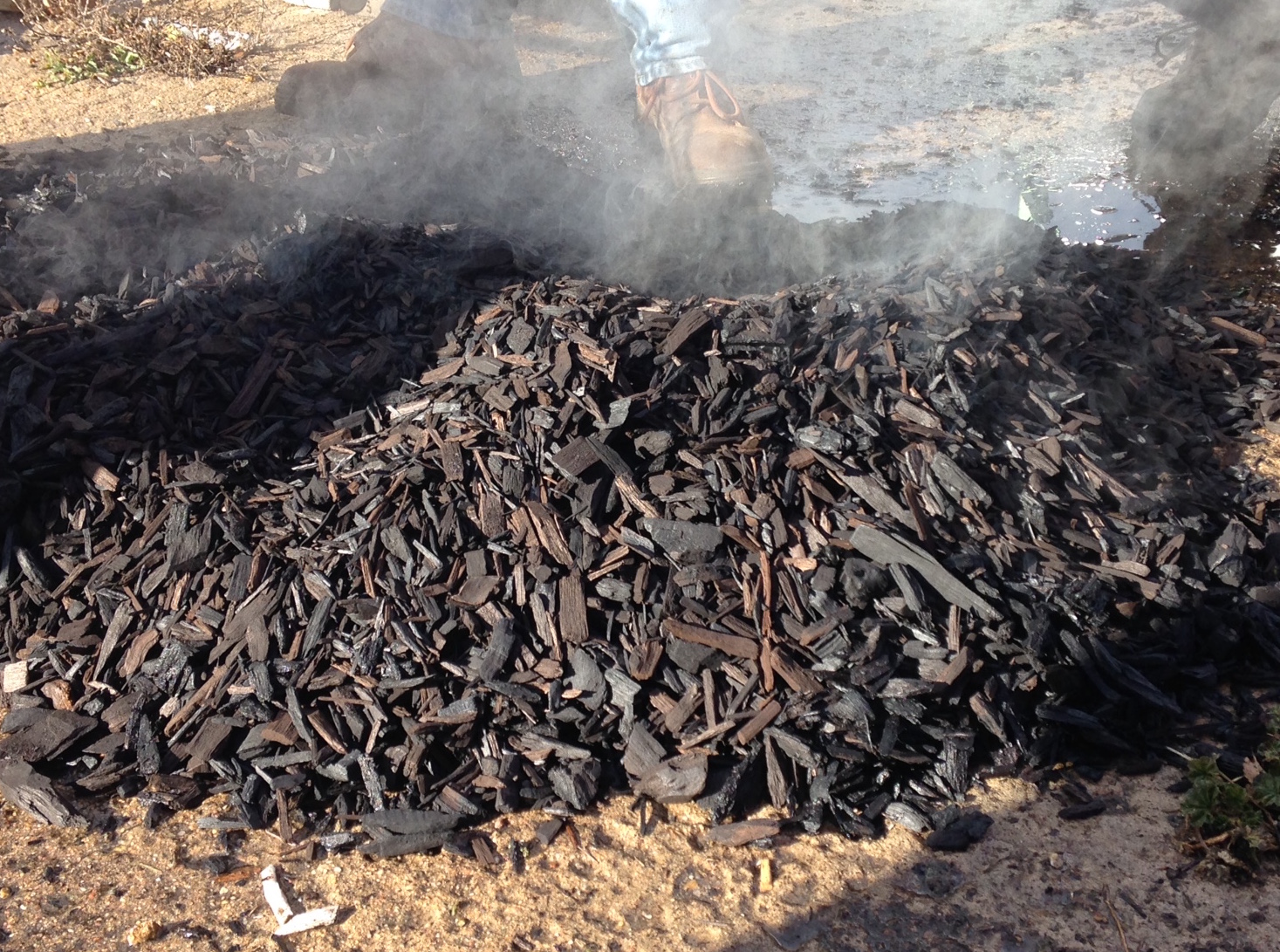 The product from the torrefaction process.

What’s particularly promising about this process, though, is how it could affect $2-a-day customers. If we can establish torrefaction plants in villages in India, in rural areas where mesquite already grows in abundance or where it could be easily introduced, each plant could create four jobs and produce 7 tons/day of briquettes from a 4-5 km radius. With prices competitive to coal, each village could bring in approximately 1,000 USD per day by selling these briquettes to local industries or households that currently use coal or wood for heating.

Multiply that by 365-days/year across 10,000 villages, and that’s a substantial addition to gross annual income in areas of the country that need it most. From a systems point of view, most of that money would recirculate locally, potentially transforming their economies.

Invasive species are the equivalent of radically affordable technologies. Tweet This Quote

Invasive species are the equivalent of radically affordable technologies. We have to mimic Mother Nature and select the most efficient growing systems she produces—it’s essential to the design process. If we can help people get over the natural reluctance to plant invasive species, they can inspire the next generation of frontier multinational companies, truly disrupting the way the world does business—in a welcome way.

What is the Point of Business?

What is the Point of Business?