Michael and his company, Tugende attended the 2012 Unreasonable Institute. If you want to read more and connect with him click here to see his Unreasonable Profile.

Michael Wilkerson: Michael is the co-founder and CEO of Tugende. His passion for Uganda began at age 19 with an internship at a local newspaper. After graduating from Stanford, Michael returned to Africa full-time as a Fulbright Scholar. Michael started Tugende in late 2010 after he realized that most motorcycle taxi (boda boda) drivers in Kampala, Uganda did not own their own motorcycle. Most rented their motorcycle from a landlord with no fixed lease, leading to job insecurity and making it hard to build savings and control their own futures. 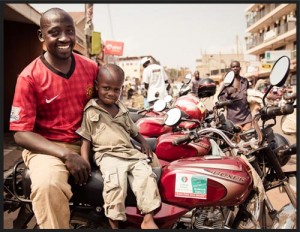 Tugende stepped in to help drivers own their own motorcycles via an affordable payment model, with weekly costs similar to renting, resulting in a huge financial and mental gain when ownership is earned after 18 months.

Michael Wilkerson came to the Unreasonable Institute in 2012, having already enabled 25 boda boda drivers to own their own motorcycles. With the extra income, these drivers had invested in their homes, sent their kids to school, and even started side businesses to generate further income.

Michael arrived at the Institute looking for guidance on how Tugende could do much more. With the help of a mentor team featuring advisors like Vamsi Sistla, Chris Yeh, and a new board member, Aaron Patillo, since then he has raised $210,000 in investment capital, $80,000 in grants and received $100,000 worth of professional services from Siegel and Gale, a brand innovation firm that partners with the Unreasonable Institute to support entrepreneurs like Michael.

As a result, Tugende went from 25 to 250 boda boda drivers in Kampala and the number of new, free-and-clear owners has increased more than 100% in just over a year. With the help of the Unreasonable Institute, Tugende continues to grow, as current customers keep driving toward ownership and new drivers take the first step towards financial independence.

The Unreasonable Institute arms entrepreneurs creating solutions to the world’s biggest social and environmental problems with the mentorship, capital, and networks they need to do so.