This Video Game is Updating Education for Millions of Mexican Youth

Mexico has an alarming school dropout problem. Despite having the largest population of 15-19 year-olds in Mexico’s history, only 53% are enrolled in education—one of the smallest proportions compared to other OECD countries. Only Colombia and China have lower enrollment rates. This translates into Mexico ranking nearly last in secondary education graduation rates in the OECD.

When Jochen Siess, originally from Germany, moved to Mexico to be with his wife, he was struck by the state of the country’s education system. Wanting to make sure his four-year-old son grew up with better opportunities, in 2012 he co-founded Ncite, a game development studio based in Mexico City.

Mexico ranks close to last in secondary education graduation rates in the OECD. Tweet This Quote

Ncite is on a mission to transform education in Mexico. The company creates fun, educational video games and apps designed to generate a lasting impact on the learner.

“Whenever I sit down with my son and tell him this is the way it is, we’re doing it like this, he doesn’t even pay attention to me,” said Siess. “But if I engage him in a playful approach to learning, he’s all over it. He completely surprises me with the results he creates. This is my professional trajectory, and it took me sitting down with my son to realize I’m on to something. This approach to teaching is the way I want my son to be educated in the future.”

After working for years to develop a variety of games for Fortune 500 companies like EA Sports, Coca-Cola and Telus, Siess and his co-founder Abraham Morales realized they didn’t want to continue selling games only to companies. Instead, they saw the potential of combining video games with e-learning.

Only 53% of Mexican youth aged 15-19 are enrolled in education. Tweet This Quote

“Now, interactive digital education is something that a lot of companies are tapping into,” said Siess. “But I feel we are at the vanguard of this by using games. Our games are really all about 21st century skills—relevant skills not in the curriculum right now, using a methodology to practice what you learn instead of memorizing. We feel it’s very powerful.”

Currently, the team is in the pre-production design stage for a video game called Local Heroes—a role-playing game for high school students aged 13-17 to help them discover their career path.

The idea came from sitting down with the company Gentera, the holding company for Banco Compartamos—the largest microfinance bank in Latin America. Gentera noticed how their clients’ children, especially those in rural areas, grew up with a limited outlook on the kinds of professions they could have. They only saw what their parents did. The company wanted to find a way to show youth they could aspire to more. The combination of widespread cell phones and popular games became the obvious answer to engage a youthful audience.

E-learning combined with video games has the potential to transform education. Tweet This Quote

Although Ncite ultimately decided not to work with Gentera, the team independently pursued the idea for Local Heroes and ran a successful crowdfunding campaign to start building it.

To play Local Heroes, youth select from a variety of different professions—including a doctor, engineer, musician, athlete and astronaut—to simulate their first internship. Then, they are matched with a virtual in-game mentor. Based on real and successful Mexicans, these mentors assign tasks relevant to the profession. 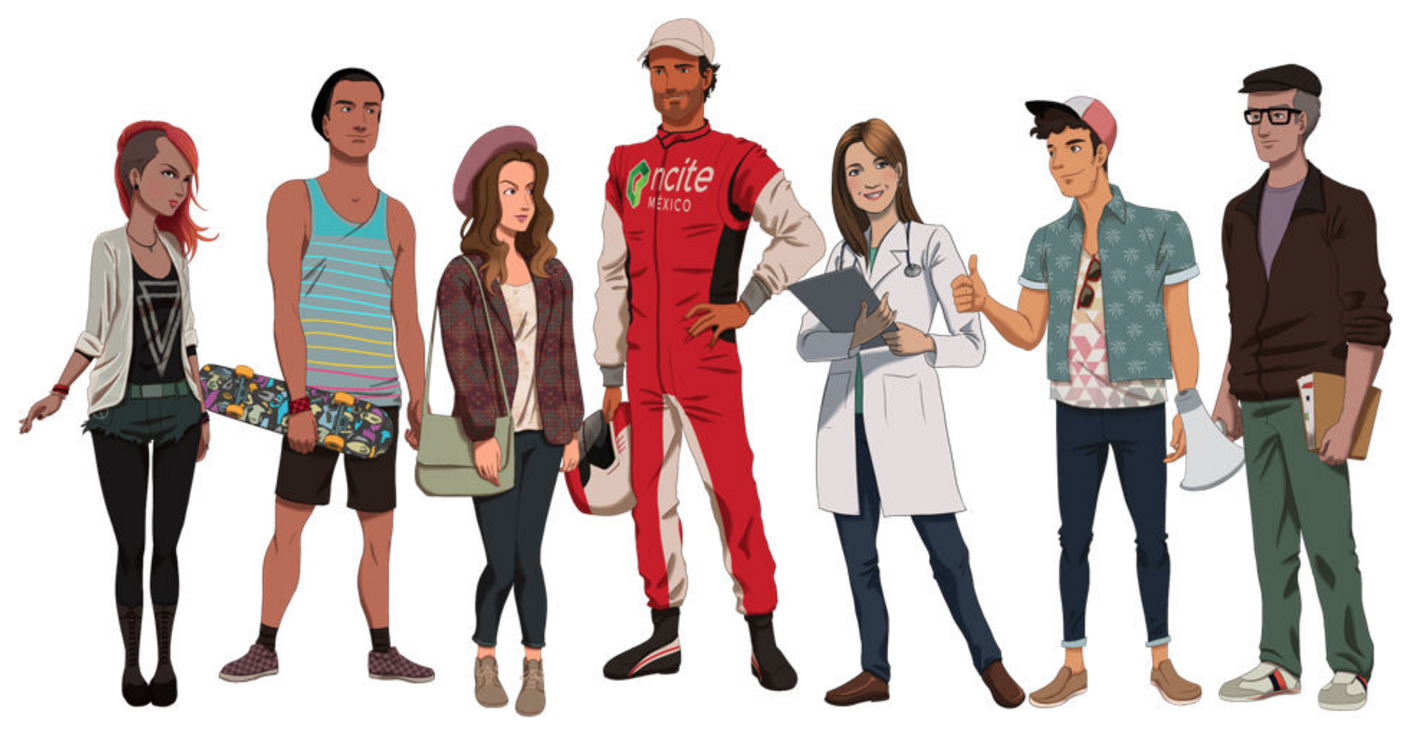 Players complete timed challenges, receiving points that unlock different levels and can be converted into virtual money to customize their avatar. They also share conversations with their mentor to learn about what obstacles they had to overcome in order to achieve success. The idea is to give the player insight into the day-to-day reality of their chosen profession, building skills and confidence to achieve more in real life.

We have to work together and get rid of old education paradigms. Tweet This Quote

“We have to work together and get rid of old education paradigms,” said Siess. “Who cares about memorization anymore? Everything is readily available on Google better than I could ever memorize it. Creativity is so much more important now.”

Despite the creative and educational component to Ncite’s video games, the gaming industry in general is still taboo in Mexico—proving to be an obstacle when it comes to convincing school principles to incorporate games into an often state-mandated curriculum.

“Normally, when you talk about video games, there’s a lot of violence and addiction,” said Siess. “But violence isn’t for us. We don’t like the term addiction because in relation to video games, what it means is the users are really engaged and want to continue. Rather than only using engagement for people playing something over and over that doesn’t really mean much, why not use that engagement for creating learning results?”

When everything is readily available online, creativity is more important than memorization. Tweet This Quote

In an effort to sidestep this stigma, Ncite is focusing on turning teachers into evangelists for their games. They do this with a proven data-driven approach fine-tuned through years of working with corporate clients.

Ncite built a platform called Sentio Play, which tracks things like how long a user plays the game, how many attempts they make at a certain challenge, and how often they return to keep playing. The platform compiles reports showing where the user began and how far they progressed.

Using this platform appeals to educators because they can generate assessments to better understand their students’ learning styles and competencies. 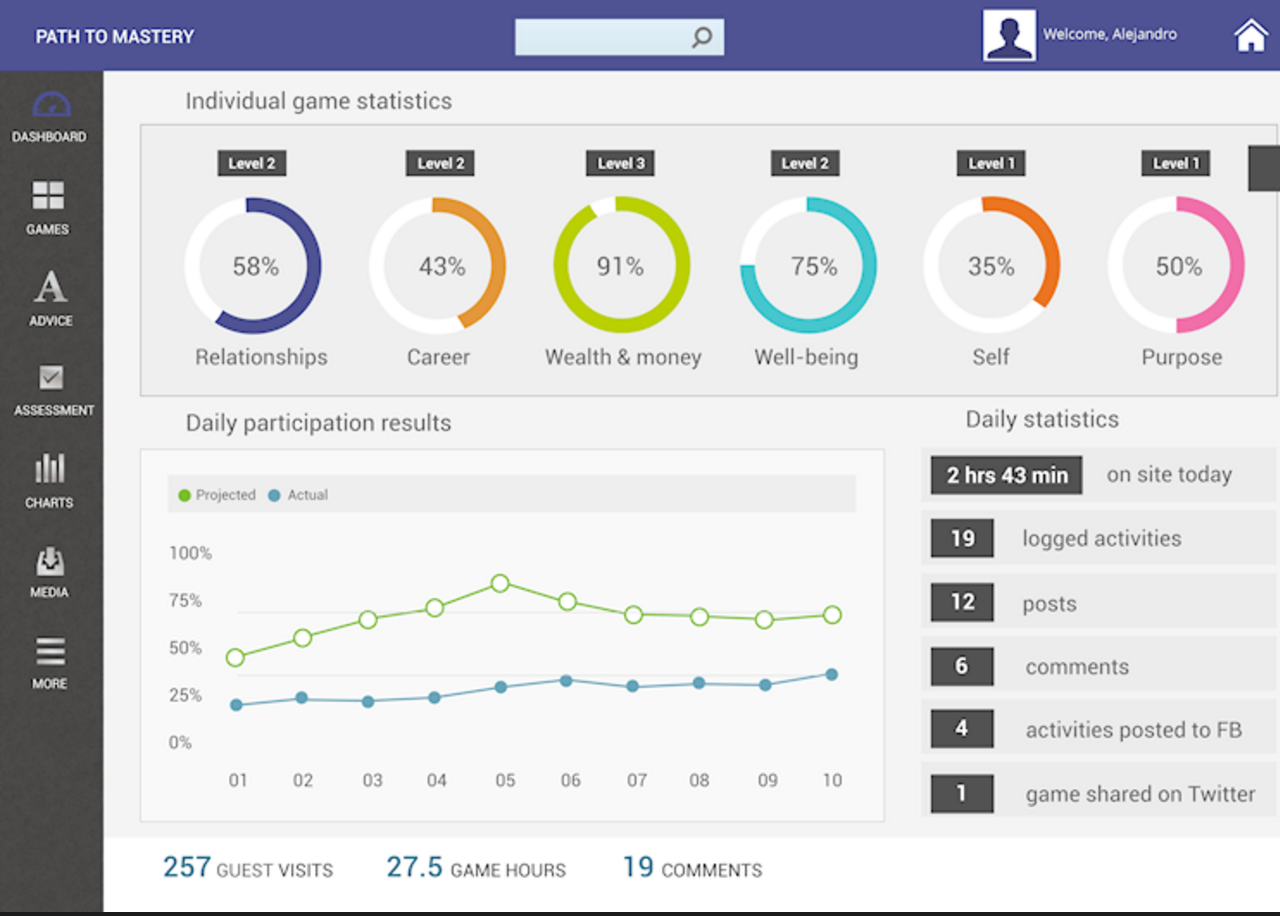 An example of the dashboard from Ncite’s data-tracking system, Sentio Play

“If we can play a little role in transforming education, refocusing what it’s all about, and doing it in an engaging way, then that’s very impactful,” said Siess. “It has the potential to scale. I would love to reach every learner on the planet.”

Now, Ncite is focused on securing the last 25% of their current funding stage. Recently, the team partnered with an online community in Mexico that gives them access to more than 140,000 teachers across the country. In the future, they have the ambitious goal of reaching more than 40 million people across the globe with their games.

For now, on the cusp of launching Local Heroes, the company is positioned to revolutionize the way Mexico educates its millions of children.