The average adult breathes 3,000 gallons of air every day. But in some areas of the world, this essential human function could prove to be lethal. According to the World Bank, air pollution now ranks as the deadliest form of pollution, and approximately 90 percent of the world lives in places that fall short of the World Health Organization’s air quality standards. Additionally, air pollution costs the global economy about US $225 billion annually.

According to the World Bank, air pollution now ranks as the deadliest form of pollution. Tweet This Quote

But luckily, there’s an app for that. Today, over 50 million people make informed decisions about when and where to go outside with accessible, hyper-local, and real-time air quality data – on their smartphone. By providing accurate air quality data similar to weather data, BreezoMeter’s mission is to help cities and businesses improve the health and quality of life for millions of peo-ple worldwide.

Unreasonable sat down with Ran Korber, co-founder and CEO of BreezoMeter, to discuss how the company got started, why he met former President Obama and several other world leaders, and what this data could mean for the health of the world. 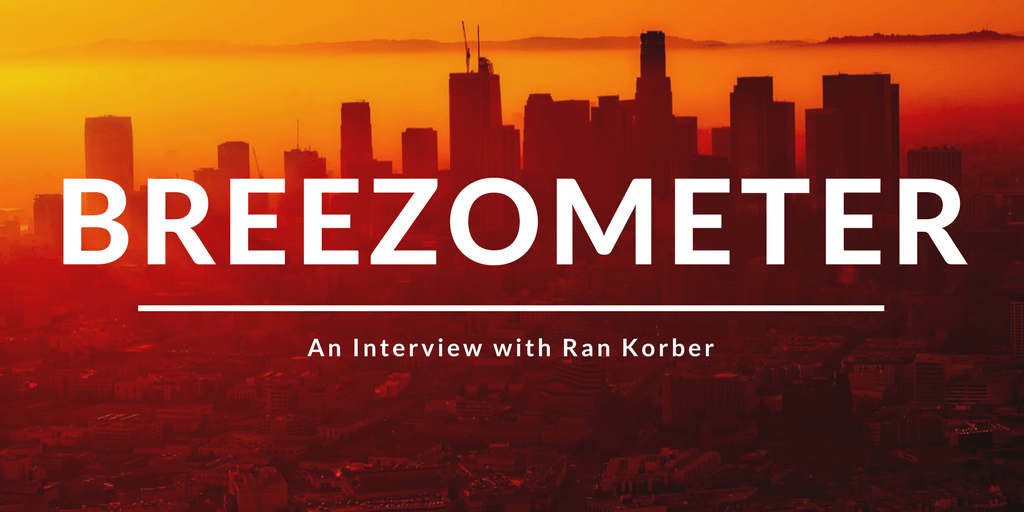 How did BreezoMeter get started?

In 2012, I was searching for a house to buy for my family, and my wife has asthma and she was pregnant with our first child, and as an environmental engineer I knew how short-term exposure to air pollution can have severe health effects on her and the child. Even a short term exposure of only one hour to air pollution can cause an asthma attack and increase the risk of premature birth. And I thought, how can I protect her?

Air pollution is the biggest environmental health crisis we have today. Tweet This Quote

So we decided to build this app to show you what you are breathing in real time, as well as his-torical air quality data so you can make an informed decision about where to buy a house or how to plan your day. We started working on that in the garage. I found the house to buy. And then afterwards all of my friends came to me with the same problem saying, ‘I also want to make sure that my children and our family is OK. Can you also share it with me?’ And I realized it’s not just our problem — it’s a problem for all of us. 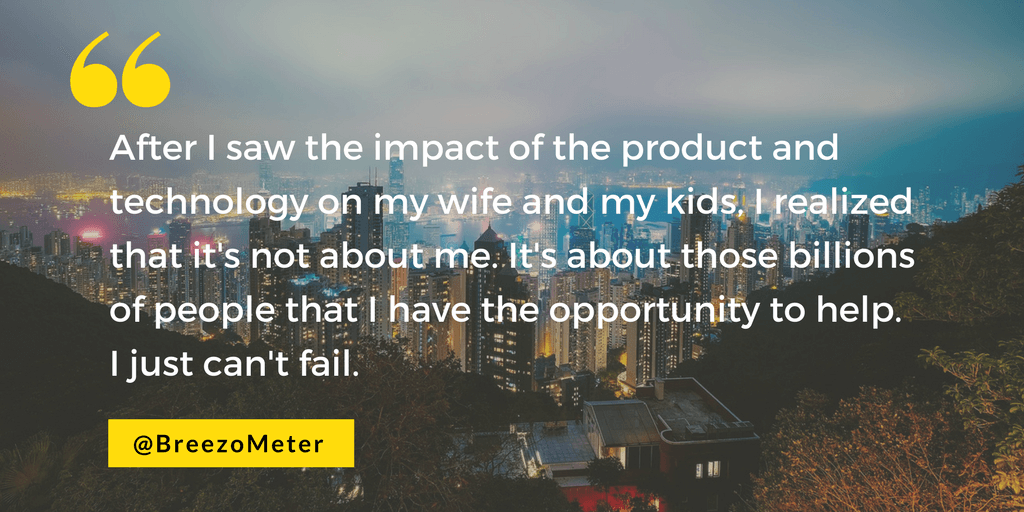 Why is the app appealing for users? How does it work?

So we have our consumer app, but most of our customers are companies that also have solutions to protect you from air pollution. So when you buy a Dyson air purifier, for example, you also get a free app that connects to the air purifier, and if you are exposed to low air quality, the air purifier will turn on automatically and you will get an alert with data on the air pollution that you are breathing in your house and the air pollution outside. It can help you to decide when it’s the right time to go do outdoor activities, to take your kids to the park or to the beach. And every time you’ll come back, if there is still low air quality outside, your house is protected.

How many users do you have?

More than 50 million people use our data every single day and this is thanks to our customers that are sharing our data with their users. We are privileged to work with amazing companies.

What regions are you most active in?

Our technology works in the way that we gather all the data that is available that we can use in order to focus the air quality. And because one of the data sets we use is satellite, we can operate worldwide. Currently, our customers have users in 29 countries. But they plan to launch their product in even more countries and of course then BreezoMeter will be available to those countries as well. We already decided in a very clear way that in 2017 we want to have world-wide air quality data available to everyone that wants to use it. 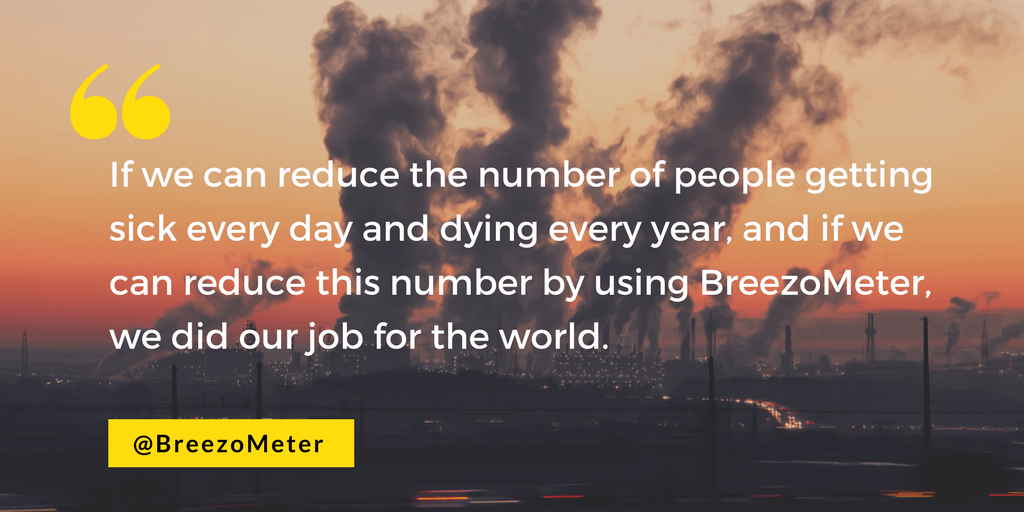 What is the greatest challenge you currently face?

Air pollution is one of the major challenges facing humanity, and it’s increasing the risk of asthma attacks, premature births, lung diseases, and cancers. On the other hand, it’s very simple to avoid air pollution if you can measure it. You don’t need to protest, you don’t need to move away from your city, you just need to make sure that you know the air pollution every day, every time, and make informed decisions, very simple decisions, such as whether to close the windows or turn on the air purifier. There is a big challenge of how to create this awareness.

Air pollution is one of the major challenges facing humanity, but it’s very simple to avoid if you can measure it. Tweet This Quote

The other challenge is that all of our customers are actually big companies, so how do we convert this knowledge in such a way that provides a return of investment to make it worthwhile for them to use our product.

We already have a knowledge of that and what we learn from some of our customers is that because air pollution changes often, they have more opportunities to engage more with their users, which helps them to increase sales and have better feedback from the users because the user knows that somebody’s really protecting their health.

What are some of your greatest triumphs so far?

The acknowledgement we’ve received on the technology in our mission is hugely motivating. In 2015 we were recognized for excellence from the United Nations and the White House. We had the privilege to meet President Barack Obama twice: once in the White House, and once he invited us to the historical first visit he had in Kenya as President. So I also met President Kenyatta, the President of Kenya. We also met a few other world leaders such as Prime Minister Netanyahu, the PM of Israel, the PM of France, and the President of Catalonia. And all of them are so supportive of our mission and really believe that it can have an impact on the world. We were also honored to be selected in 2015 as the most promising startup in the whole world by the Global Entrepreneurship Initiative. 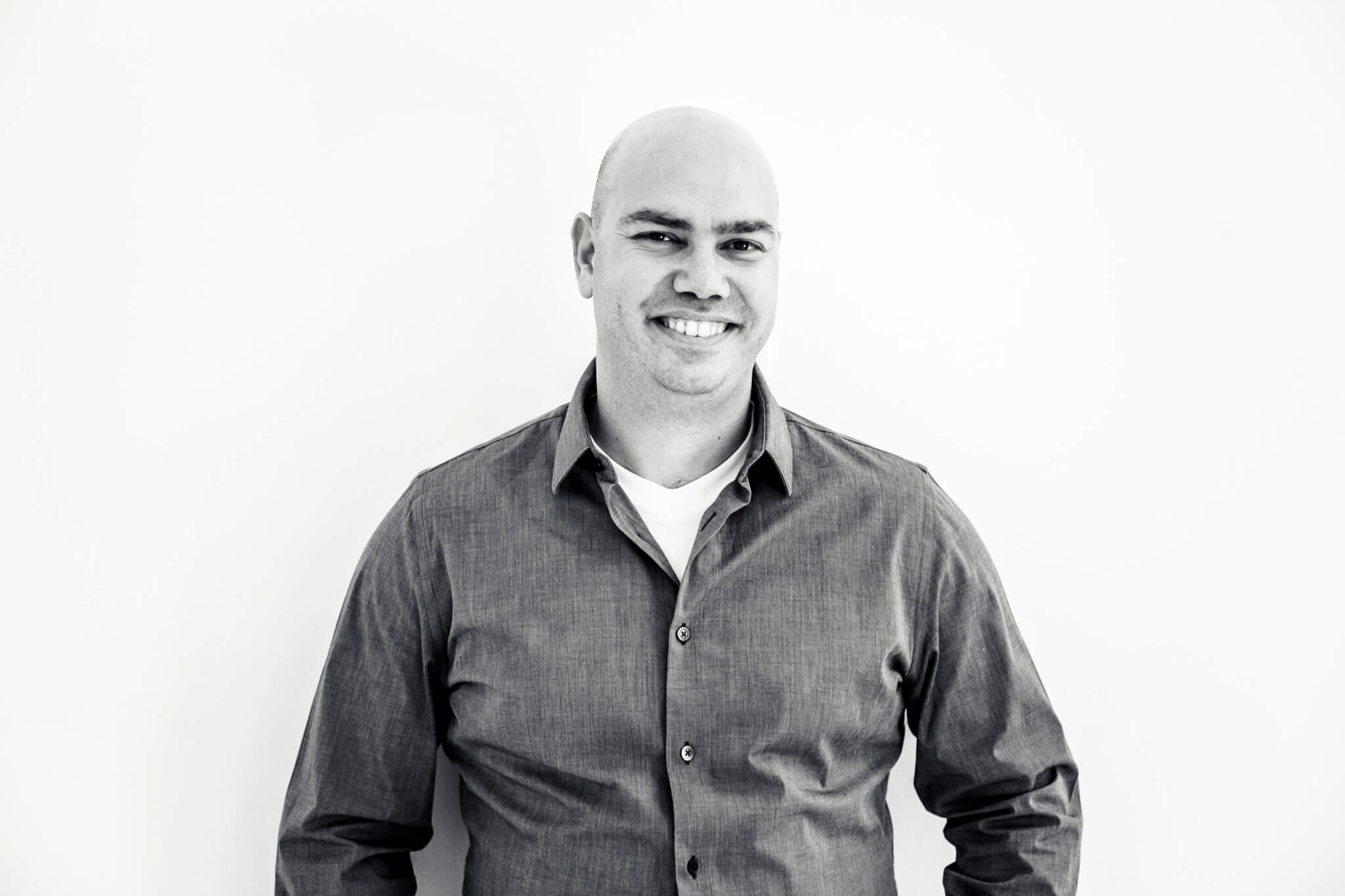 What sets you apart from your competitors?

BreezoMeter is the only platform that enables you to know what the air pollution is in your specific location. Most other companies or cities or municipalities that have some air quality data only receive it from sensors. And you cannot have one billion sensors in every city, so in most cities you have between two to 20, or none at all. Some countries only have one sensor for the whole country. So then you only know air pollution data at a single, specific location within the country.

BreezoMeter is the only platform that enables you to know what the air pollution is in your specific location. Tweet This Quote

But what if your house is 100 miles from the closest sensors? In Australia, for example, there are only 13 air monitoring stations for a population spread across eight million square kilometers.

So BreezoMeter takes this layer of data from the monitor station, but adds to it real-time traffic data, the weather forecast, and satellite data, and then uses air pollution dispersion algorithms and machine learning algorithms to calculate the air pollution street-by-street all over the world, even in places that are far, far away from any ground sensor.

What do you hope the world would look like as a result of everyone using BreezoMeter?

Of course, we want for there to be less pollution in the world. But until that happens, we really believe that if people would be more aware of the fact that there is a very easy solution that can protect them and protect their loved ones, then they will also bring more awareness to the fight against air pollution. We want to help people make those small, informed decisions that will allow them to live a better quality of life, and that children can stay healthier. If we can reduce the number of people getting sick every day and dying every year, and if we can reduce this number by using BreezoMeter, we did our job for the world. 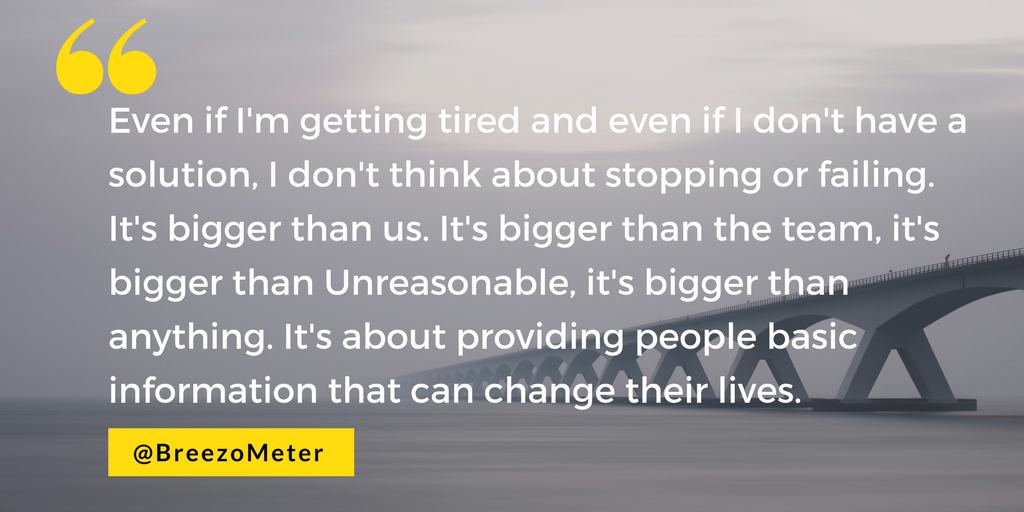 What gets you excited about the future of your company?

I love seeing use cases that rely on our data, so to see that for the first time in a Dyson air purifier, in an app for asthma patients, apps for weather, or apps for carbon in cars. In apps for real estate. That makes me excited.

The other thing that gets me excited is that as we grow, there is more and more awareness created around the issue, we can see that it’s getting more press coverage in the media and that people are speaking out about it. It’s amazing to see people using your product without knowing you.

What does success look like for you in BreezoMeter?

From Day 1 we decided that the only way to achieve our mission to improve the health and quality of life of billions of people is to become a big, sustainable company. And to do that you need a lot of people — talented people. So successful means that in the next few years, BreezoMeter will become a company with several hundred employees that can extend this impact to billions of people and we also will have the ability to really measure how many people improve their health and quality of life because of our product.

Also, success for me will be that we will grow in such a way that we will have the opportunity to solve problems other than air pollution, providing people with data on soil contamination or water quality.

Entrepreneurship is hard. What keeps you going?

After I saw the impact of the product and technology on my wife and my kids, I realized that it’s not about me. It’s about those billions of people that I have the opportunity to help. I just can’t fail. And even if I’m getting tired and even if I don’t have a solution, I don’t think about stopping or failing or how hard it feels, because it’s bigger than us. It’s bigger than the BreezoMeter team, it’s bigger than Unreasonable, it’s bigger than anything. It’s about providing people basic information that can change their lives. That keeps me moving. 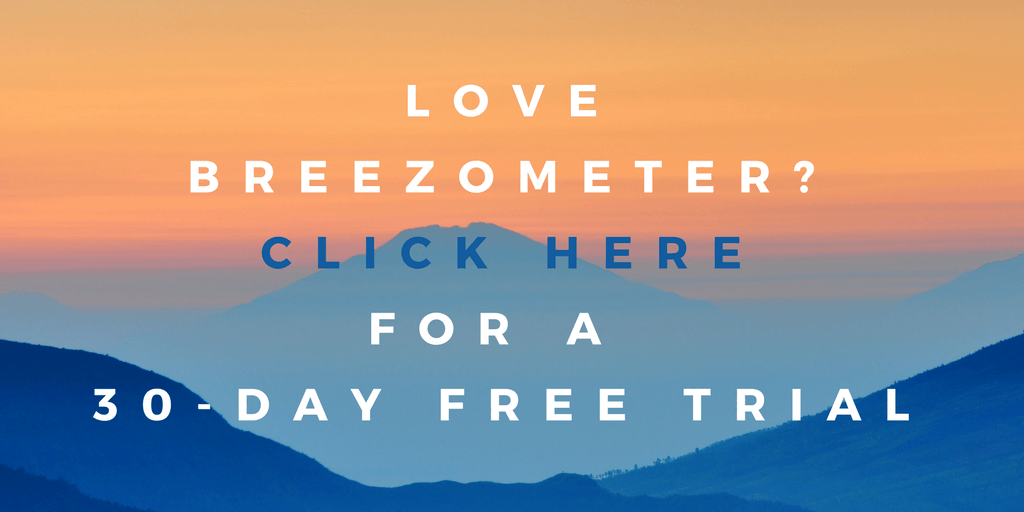