The following is the second installment in a three-part excerpt from One Person Acted and Everything Changed, a book that chronicles ten accounts of extraordinary people who risked everything to change the world.

n London, Rabindra began to understand for the first time that money being donated to the poor in Nepal came from individuals living in Western countries. Never realizing this before, it shifted his perception, as he had long believed people in the developed world to be individualistic and disinterested in helping others.

“After seeing how pervasive philanthropy was in London, I came to the conclusion that without these people in the West donating money, there would be no Action Aid functioning in Nepal; there would be no Care International functioning in Nepal; no Oxfam, no others if it were true that westerners were only individualistic and not generous. They are generous! It was a shocking revelation.”

This awakening expanded as Rabindra followed the news of Charles, Prince of Wales, when he traveled from London to Nepal to visit Maiti Nepal, a nonprofit that protects girls victimized by the sex trade from suffering further exploitation. Rabindra followed the story as Prince Charles returned to the U.K. and immediately created a fund to which he pledged proceeds from his future speeches to help Maiti Nepal. Ultimately, he raised 64,000 British pounds, the equivalent of close to $100,000 USD, which he donated in its entirety.

The prince’s large donation to help girls in Nepal had a profound impact on Rabindra. He reflected on the three times he had witnessed extreme generosity and benevolence that surprised and inspired him: the poor women in Pakistan who gave rupees to even poorer people; the individuals in London and elsewhere in the West who gave to organizations that helped the poor in Nepal; and finally, Prince Charles, who raised money to help girls in Nepal.

While appreciative and humbled by the goodness of strangers who supported the poor and victimized in his country, the largesse began to weigh heavily on him, causing him to face a new and troubling question. 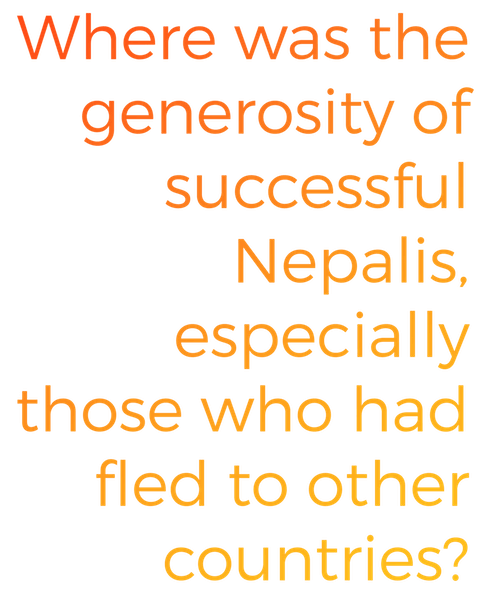 “Where was the generosity of successful Nepalis, especially those who had fled to other countries?”

Those individuals who had received a foreign education and made good incomes were staying abroad and ignoring the plight of their own people. He questioned why strangers were doing for Nepal what they themselves would not. Had Nepalis simply given up and abandoned their homeland? Had he?

“Slowly, I began to feel that is was not enough to be a journalist. I felt it was not enough just to talk about poverty, about service, ideals, and how to change the world. It wasn’t enough.”

Had Rabindra not left Nepal to study, and had he not ultimately found himself living a comfortable life with his wife and children in London, enjoying first rate schools, excellent health care, abundant cultural activities, and a prestigious job at the BBC, he would not have seen and felt the stark contrast when he returned to visit his family and friends in Nepal. He would not have remembered the impact of the first time he saw poor people begging in Kathmandu and Lahore when he was a young man. He would not have noticed how dramatically those scenes contrasted with the experiences and lessons of his youth.

In the end, it was not only abject poverty and starving Nepalis that beckoned him home. It was a horrific and extensive laundry list of problems: blatant and pervasive corruption, substandard health care, antiquated education, an unstable government, choking pollution, a lack of community, and an utter and complete absence of national pride.

It became increasingly obvious to Rabindra that the root cause of the maladies began when Nepal embraced the industrialized world, an event that instigated the loss of the infrangible human connection between them. While it was clear they couldn’t and shouldn’t try to turn back the clock and reverse progress in Nepal, he began to believe that the once deep connection between the Nepali people could be restored.

Of course they didn’t call it that, nor did they refer to it at all, because in past generations this was simply a way of life. Because their daily greeting — May you have enough to eat and give away — was so integral to their lives, they may have issued those words by rote. However, the actions that prayer-like phrase inspired became the threads that, when woven together, sustained society during his grandparents’ lives and for centuries before.

fter a period of intense contemplation and many discussions with his wife and other Nepalis in London and Nepal, Rabindra conceived of a plan to create a platform of Practical Philanthropy. He recognized that few people in the world could live like Mother Teresa or, in the case of Nepal, Anuradha Koirala, believing as he does that those rare individuals are imbued with exceptional, even divine, qualities. What he felt could be expected, however, is that every Nepali person could begin thinking about those individuals who desperately need help, those who are unable to help themselves. 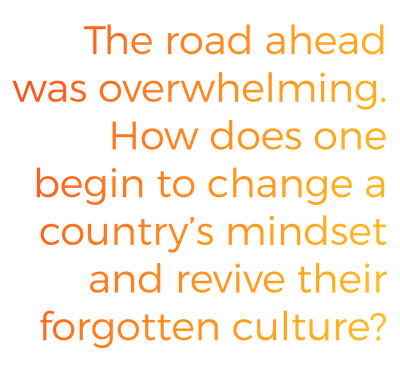 The road ahead was overwhelming. How does one begin to change a country’s mindset and revive their forgotten culture? He and his wife decided if they were going to return to Nepal to take on this challenge, they would need to do so before their eldest child turned ten.

He began by quitting his job in London – not easy when you do what you love, are known and respected, and you are well paid. However, he knew it was necessary. When he told his boss at the BBC he was leaving and moving back to Nepal, his boss responded by offering him an even better position in Nepal. The offer came as a welcome surprise, making him feel as if his decision was the right one. Soon after, they said good-bye to London and began a new life in Kathmandu.

began to think of the Nepali people around the world, in the U.K., the U.S., and elsewhere, who, when they visit with each other, tend to talk about Nepal, about politics specifically, because the government is so unstable. There is so much corruption that people don’t respect the leaders.

This is what they always talk about no matter how long they have been away — what has gone wrong in the country. They say they can’t go back and live in Nepal again because of all this corruption, poverty, and so on. But if someone asked them, ‘If you feel so passionately about the country’s problems, so passionately about the poverty and corruption there, as a Nepali person have you done anything to correct these problems?’ I would say all Nepalis living abroad care deeply about Nepal, and yet most of them would have no answer. They come back to visit every year, and hardly do anything.”

Rabindra began by founding the charity Help Nepal Network in 1999, built on the following premise: “Donate whatever you can. Just separate a little bit from what you earn. If you earn a little bit, separate a little bit. If you earn a bit more, separate a bit more, and so on, just as we used to do with food. This is practical philanthropy, and while it won’t impact your daily life very much at all, it will help other people immensely. Then perhaps our society can become more egalitarian — not financially egalitarian — conceptually egalitarian. As the English say, ‘You can’t have an island of prosperity in a sea of poverty.’”

He focused his fundraising efforts on Nepalis living around the world and on the wealthy within Nepal. He told them the money raised by the Help Nepal Network, or HENN, would go to building schools, health centers, libraries, children’s homes, and other life-sustaining infrastructure that the government simply wouldn’t or couldn’t do. They would also contribute to disaster relief.”

They began by asking those who love Nepal around the world to donate at least one dollar a month to the Help Nepal Network.

“We explained to those living outside that it is the educated people in the country, not the poor people in the villages, who are to be blamed for the corruption and the negative things happening in the country. Poor Nepalis are much more honest, and they are helping build the schools, and the health outposts, and the libraries. They are good people, honest, and hard working. We continued to prove that good things were happening with funds that were being donated, and slowly our support base increased.

They were asking exactly how the money would be used. We told them we would not spend one penny on anything but the work itself. From the beginning, we separated the administrative arm from the charitable arm. This is very different than most non-profits and charities that normally take 10-20 percent of their donations to fund the administration. We used our own money and we all worked as volunteers.”

As the donations began to grow, and they began constructing schools and medical outposts throughout the country, Rabindra could see they needed a small coordinating office in Kathmandu.

“Initially that was difficult to fund. So I searched to find 25 Nepalis who were willing to give $4,000 each to set up the Help Nepal Administrative Endowment fund of $100,000. It was difficult. I wrote and spoke with many, many individuals and eventually I was able to raise it. You can find the names of these people on the Help Nepal website, in addition to my wife and myself, who each gave $4,000.

“We were really persistent, and we proved that good things could happen in Nepal. And we showed them that there are good people left.

“Lots of people were cynical at the beginning about how the money would be spent. I told them, if we fail, you will lose a dollar. But if we don’t try, we will lose our whole nation. We told them, ‘We are young people trying to build something. If we misuse the money, we will lose our reputation, our image, and we’ll lose our future. And we are ready to take that risk.’”

By Western standards, a dollar a month can sound negligible – perhaps not worth bothering over. In Nepal, it’s a small fortune.

“You can’t imagine what one dollar can do in Nepal. One dollar makes a huge difference, a huge difference! There is one mother here who recently committed suicide with her daughter, because she couldn’t feed her. In the last hour, 1,000 people have died from hunger or hunger-related problems in the world. In Nepal, in the last hour, four children have died because they lack the most basic medical facility.”

This deplorable and unnecessary situation frustrates Rabindra deeply, and as he discusses it his voice reveals a mixture of anger and deep sadness.

With greater trust came more donations and HENN began constructing more health outposts,
building and expanding schools, and opening libraries in rural areas. Eventually they started to fill them with computers and books. Slowly, some Nepalis began to believe progress could actually be made. They began to believe what few had thought possible — that the cohesiveness of the Nepali culture and community may finally be returning.