You want to scale your business? An effective scaling strategy boils down to answering some fairly simple questions.  Read on to greatly improve your chance for success!

The author of this post, Paul Polak, has brought 19+ million farmers out of poverty. His work is dedicated to designing products for the Other 90% (the 2.6 billion customers who live on less than $2/day). Kathryn Flexner co-authored this post. Paul’s new book, The Business Solution to Poverty, is out this month.

Scale is the single biggest unmet challenge in development and impact investment today. IDE, the development organization I founded, has helped some 20 million people living on a $1/day move out of poverty, but this is a drop in the bucket compared to the 2.7 billion people still living on less than $2/day.  About the only big business to reach poor people at scale is mobile phones, and that happened pretty much by accident.  I think it’s entirely feasible to help 100 million poor people at a time move out of poverty with technologies they need to raise their incomes, with the right distribution systems, and with business incentives at all levels. Mal Warwick and I have described some of the basic steps to achieve scale in our new book, The Business Solution to Poverty, to be released September 9th. They are not overly complicated. 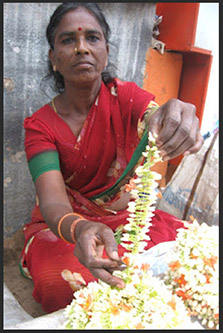 A flower seller sitting near a temple

It’s important to start with a problem that is scalable and to take advantage of market-based strategies.  For example, assuming that 10% market penetration is feasible, why not start by only addressing problems shared by at least a billion potential $2/day customers? There are plenty of such problems. There are at least a billion $2/day customers without access to safe drinking water, and another billion without access to decent affordable health services, electricity, education, sanitation, and many more. Selecting a scalable problem to begin with and building a scaling strategy into the business plan from the beginning are two key elements to a practical scaling strategy.

What about the organizational structure that is needed to achieve scale? If you need to sharpen ten pencils, it’s pretty obvious how you would go about it. But how would you efficiently sharpen a thousand pencils?  A million pencils?  A hundred million?  To sharpen a hundred million pencils a day, you would have to identify a number of processes that are practical to reach scale. You would go through the same process to figure that out for pencils as you would with a lot of different processes to reach scale in serving poor customers. To reach one hundred million customers with safe drinking water, we had to learn and operationalize every step it takes to deliver water to a block of 50 new villages in Orissa every month. With this defined, we will roll out services in multiples of 50 village blocks every month.

Scale is the single biggest unmet challenge in development and impact investment today.

I met Madhumita Puri, from New Delhi, India at the Unreasonable Institute meeting of social entrepreneurs in Boulder, where I’m a mentor. India has 108,000 Hindu temples, and flowers like marigolds are brought by the thousands to each temple every day.  In fact, each temple throws out about 50-60 kilos of wilted flowers every day. For Madhumita’s company Trash to Cash, disabled people in New Dehli, India collect flowers discarded by 60 of these temples so they can be ground to create a powdered dye for Holi, a Hindu  festival celebrating the harvest season and the good that comes from loving God.  During Holi, people gather in the streets, celebrate, and throw powdered colors over each other. The festival creates a huge market for dye that can be made by processing these flowers. 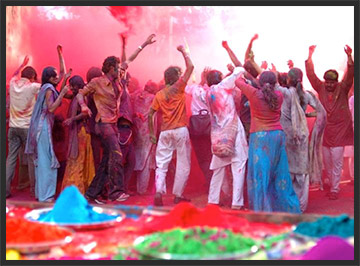 Currently Madhumita’s company has 118 employees, 84 of whom are handicapped. They now generate and sell $26,000/year of this colored powder. She believes the year-round market demand for Holi powder is in the tens of millions.  She told me there are four million disabled people in Delhi, and 70 million in India. Trash for Cash now provides jobs for just 84 of them, by collecting discarded flowers from 60 temples, but could provide so many more jobs. How could she bring her current business to scale?  It takes not being afraid of math and then it takes planning for scale. // Watch Madhumita’s 10 Minute Talk on The Future of Her Company //

There are an estimated 108,000 Hindu temples in India, and 3,000 or so in the Delhi region. Each temple discards 50-100 kilos of flowers per day, which amounts to about 150 tons of discarded flowers/day in the Delhi area alone. If she could convince a quarter of the temples in the Delhi region to provide her with their discarded flowers, she would need to expand from 60 temples to 750 temples. If she went national with 25% of the temples in India, she would need to expand her collection, processing and marketing operation to deal with the flowers from 27,000 temples, with a throughput of more than a thousand tons of discarded flowers per day. This thinking is not too unlike that required plan of how to sharpen a million pencils a day. The design of a last mile collection system, centralized vs. decentralized processing, packaging, branding and marketing, preparing a budget, and raising the funds are all critical in a step by step scaling process. 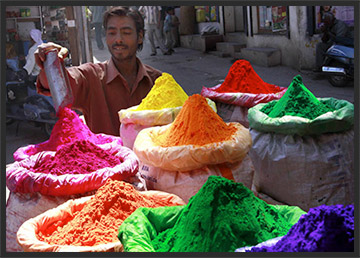 A merchant measures out dye for sale during the festival

In the end, an effective scaling strategy boils down to answering a large number of fairly simple questions.  But the devil is in the details, the more of which you consider, the greater your chance of success! The ultimate goal of scale is to have a real impact on those you are trying to help. Adjusting your strategy by how many people you are trying to reach!

Why Launching a Startup is Like Having a Baby

Why Launching a Startup is Like Having a Baby