What the Data Say About Women in Early Stage Entrepreneurship

At Unreasonable Group, we have a hypothesis that across markets, companies outperform other players in the market when they have more women in senior leadership and on their board of directors. And yet, these same companies seem to struggle in raising investment dollars relative to companies with more men on their teams. To this end, we have two questions: Do new ventures with women on their founding teams outperform their peers? And if a team has more women in roles of leadership, are they more or less likely to raise equity?

Earlier this year, we asked the Entrepreneurship Database program at Emory University if they had answers to these questions. Check out Program Director Sean Peter’s answer below.

We hear frequently that it is harder for female entrepreneurs to raise money. We also hear (from organizations like the Girl Effect Accelerator, 10,000 Women (Goldman Sachs), 5by20 (Coca-Cola), Value for Women, and WeConnect International) that mixed-gender or female-led teams are generally stronger and under-recognized versus the all-male teams that typically get funding.

Founding teams with women on them tend to have higher revenues than all-male teams. Tweet This Quote

So, is it true? Do the statistics back this up?

Over the past two years, we have been gathering information from entrepreneurs around the world who apply to dozens of accelerator programs we partner with. We then track the data from all of these ventures over time to try to answer these kinds of questions. Although we don’t have all of the answers yet, here’s what we’re seeing so far. 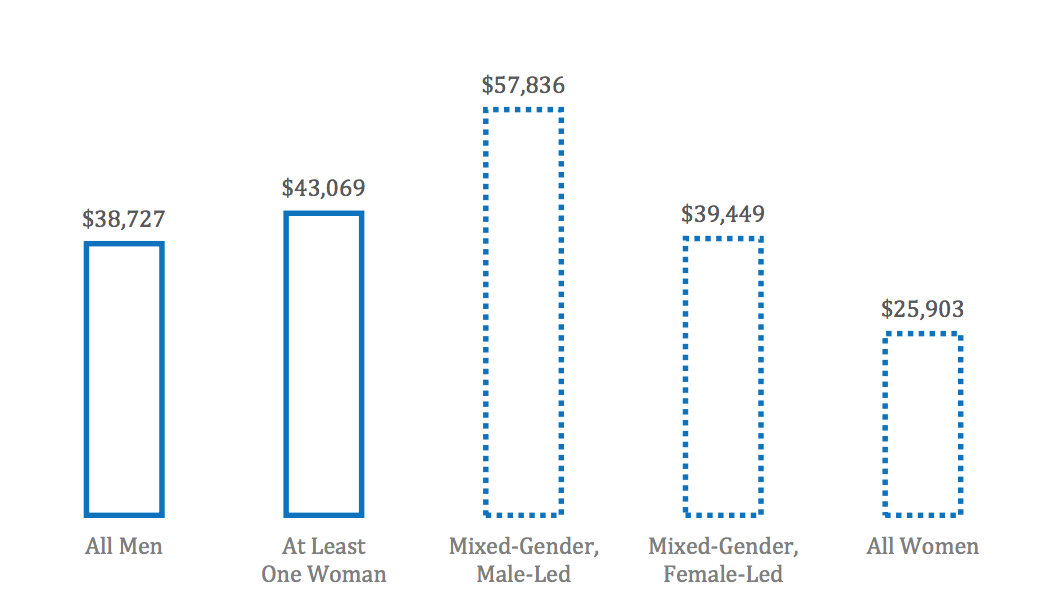 You might be thinking to yourself, “Woah, male-led mixed gender teams are doing great here. What’s up with that?”

We’re not totally sure—but one possibility is prior experience. Here’s the graph of number of prior start-ups founded by current founding team members: 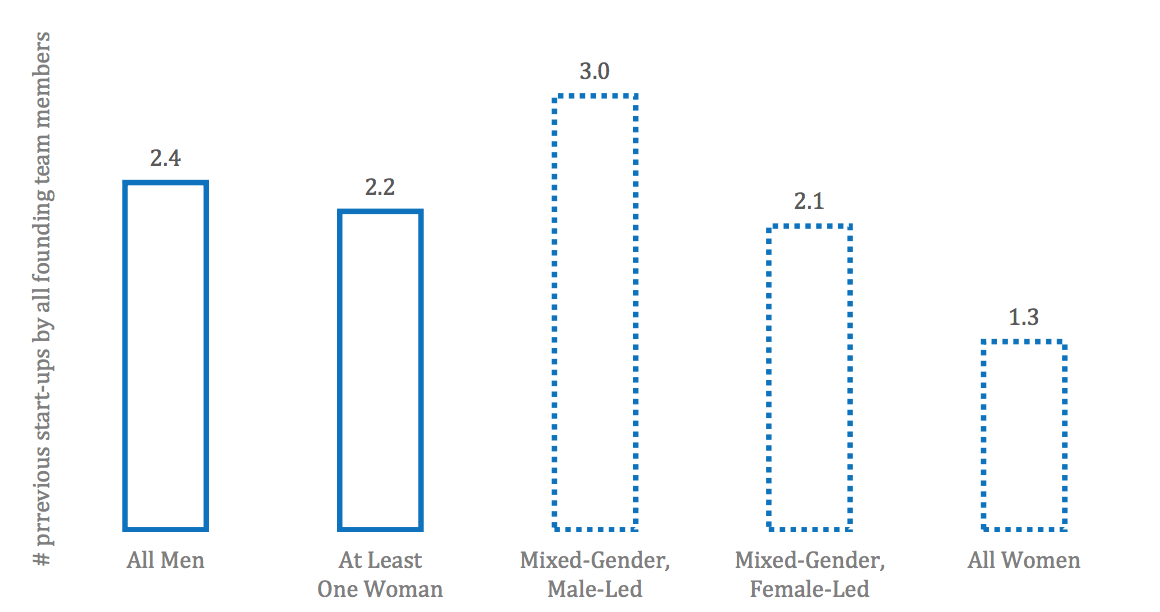 When we look at who is raising the most equity investment at this early stage, we find that all-male teams far outperform other teams. Otherwise, the patterns seen above holds. 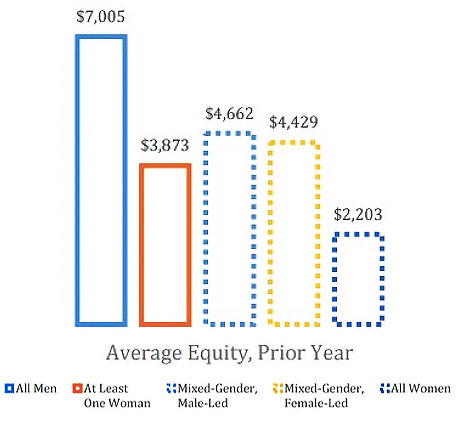 Something is going on with equity investment and gender, but it’s too soon to draw any conclusions.

Gender bias in equity investment is proportionally much larger in high-income countries. Tweet This Quote

Our data set gathers information globally, so you could make a guess that this gender bias in where equity investment goes could be explained by cultural or socioeconomic differences that exist within some emerging markets, making it more difficult for women to access financing. Interestingly, while ventures with at least one female founder have lower average equity investment in both high-income countries and in developing countries, the graph shows that the gender bias is proportionally much larger in high-income countries. 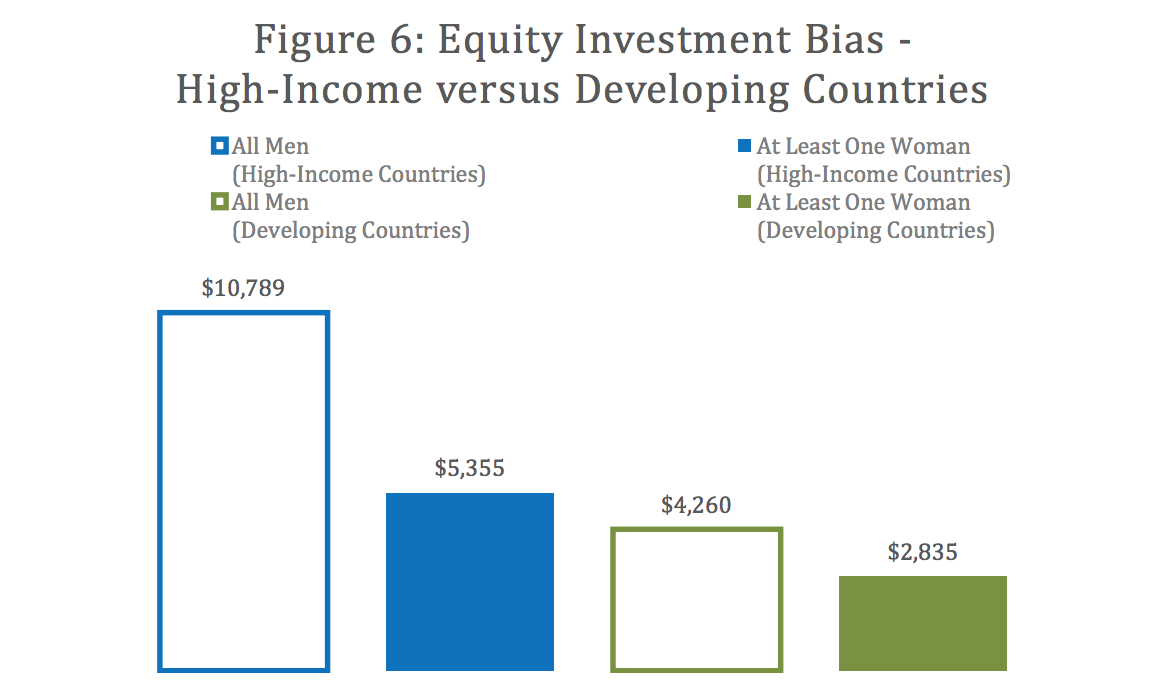 What does all of this mean?

In many ways, what we’re seeing so far supports the hypothesis laid out by the Unreasonable Group. Ventures with female entrepreneurs tend to do better in revenue and employees, but they raise less equity investment than all-male teams.

To the extent we believe there is promise in ventures with all-women founding teams, we must think about how to ensure this promise is realized. Tweet This Quote

The biggest problems are found among ventures with all-women founding teams. These ventures lag behind when it comes to revenue generation and attracting early-stage financing. They also tend to launch ventures with far less prior entrepreneurial experience and have a harder time getting accepted into accelerator programs. To the extent we believe there is promise in these ventures, we must think about how to ensure this promise is realized.

We should note, however, that this is early data and we’ll know much more over the next few years as we continue to track these (and many more) ventures. Programs like the Girl Effect might be what is needed to give female entrepreneurs—especially all-female teams or solo female entrepreneurs—the opportunity to start their first venture. Over time, these kinds of programs may change the landscape of entrepreneurship in the future. We will be here to update on what we’re learning in the years ahead.

Editor’s Note: See the full version of the brief here. More information on the Entrepreneurship Database can be found here.

Director of the Entrepreneurship Database program at Emory University. Previously, he was a founder and leader at the non-profit Global Agents for Change and founder of the Global Catalyst Initiative.