Why Some Startups Get Funded and Thousands of Others Don’t

he reality of funding is that very few startups receive any funding from Angel investors or venture capitalists. Each year, over 500,000 companies are started in the United States. Of these, venture capitalists invest in fewer than 1,000 per year, plus Angels and Angel Group in roughly another 30,000 startups.

What these numbers tell us is that, at most, only six percent of all startups receive any funding from these sources. The deeper reality is that the actual numbers are probably even lower.

Why lower? Most “venture-backed” startups have previously been funded by Angels, and most Angel-backed startups receive investments from multiple Angel groups, all of which causes some double-counting in these statistics. Thus, the true odds of any startup being funded by Angels or VCs is likely closer to three percent than six. 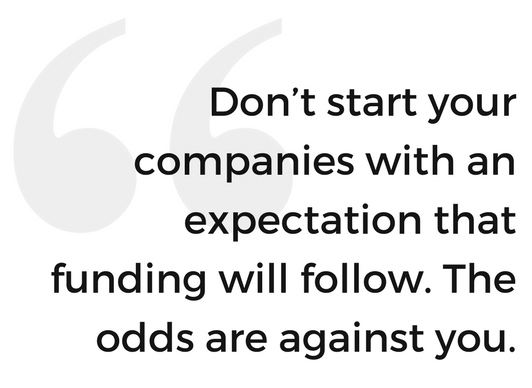 This is certainly not how it seems from reading the newspaper or startup blogs. Or from listening to the frenzy of entrepreneurs, who expect that funding is available for every entrepreneur who asks for it.

So don’t start your companies with an expectation that such funding will follow. The odds are against you.

Instead, go back to the first statistic, noting that the vast majority of the 500,000 startups manage to get up and running without any Angel or venture capital funding, using savings, friends and family, and little else in terms of funding.

That big number includes all the corner stores, landscaping companies, dry cleaners, supermarkets, etc., plus the myriad consultants, accountants, and other independent contractors who incorporate their businesses. Such companies allow the owner and employees to earn a living but usually do not make a fortune.

Those companies are the majority, not the exception. The exceptions are the startups that are funded by Angels and VCs. The exceptions turn $1 million into $100 million. That is the reason why companies that raise money are covered by the newspapers, magazines, and blogs. Those deals are rare and, thus, news!

So what is different about the 20,000-30,000 startups that are funded by Angels and venture capitalists? Why do they receive funding while hundreds of thousands of others do not?

The reality is that successful funding often comes down to networking. Interpersonal connections have more influence than the quality of the investment opportunity or terms of the deal.

For companies raising money from individual Angels, the connection between the entrepreneur and Angel most often comes from someone known to both people. For Angel Groups, the easiest way to get past the screening committee is to know either someone on that committee or someone elsewhere in the management of the Angel Group.

Ultimately, investors are trusting the entrepreneur with their money, and thus, underneath the whole process, a relationship needs to be created. Hence, existing relationships often take precedent over all other factors in a potential investment. Which then boils down to the old adage, who you know is more important than what you know.

This series has been curated from Luni’s book, “The Next Step: Guiding You From Idea to Startup.” For more on business planning, planning your marketing and sales efforts, creating a financial model, crafting a great pitch, raising capital, and splitting the pie with your team, check out the complete series.

Why The Future of Prosperous Nations Will Depend on Girls

Why The Future of Prosperous Nations Will Depend on Girls