Why Spend Money on Space Exploration When We Have So Many Problems Here on Earth?

Why should we spend money on space exploration when we have so many problems here on planet Earth? The answer to solving the world’s biggest problems is in the stars. Read what this astronaut has to say about it.

The author of this post, Ron Garan, is a Fighter Pilot, Test Pilot, Social Entrepreneur, Astronaut, and Aquanaut. And most unreasonably, through his social enterprise incubator the Manna Energy Foundation he has helped to bring drinking water to millions in Africa in a completely financially self sustaining way via his company, Manna Energy Ltd.

I’m asked all the time, “Why should we spend money on space exploration when we have so many problems here on planet Earth?”

During the past 50 years we frequently heard about the many amazing spinoffs from the human spaceflight program – everything from personal computers to solar energy. Now, we are also seeing direct tangible benefits from the research being conducted on the International Space Station (ISS).

The ISS provides a unique environment for scientific discovery that simply cannot be duplicated anywhere on Earth. Research on this orbiting laboratory is not only enabling humans to explore the solar system, it is leading to countless improvements for life on Earth. For example, space based science offers an environment to foster new materials, better medicines, improved methods to provide clean water, and better ways to grow enough food to feed our increasing global population. Studying astronauts living and working in space also enhances our understanding of the human body, resulting in innovative ways to protect all humans from many different ailments. The list of benefits is endless.

I like to point out that the space program technology transfer is two-way. Many NASA engineers give their expertise and spare time to apply space program technology to problems facing the developing world. In doing so, they learn valuable lessons that will allow us to push space exploration beyond low-earth orbit. The highly efficient engineering approaches that are required in the developing world – robust solutions that do not require a lot of maintenance, resupply or training – are the same approaches we need to employ if we are going to break out of the bounds of low-earth orbit.

Engineering for the developing world and engineering to break the bounds of low-earth orbit have much in common.  Tweet This Quote

Each year, NASA celebrates one invention out of many spinoff technologies as the NASA Commercial Invention of the Year. A solar powered refrigerator designed to support life on the Moon, but with huge application on Earth, earned the prestigious title for 2011. With approximately 2 billion of Earth’s inhabitants lacking access to electricity, this technology developed at NASA’s Johnson Space Center will help us explore space as well as significantly improve the lives of so many on Earth. 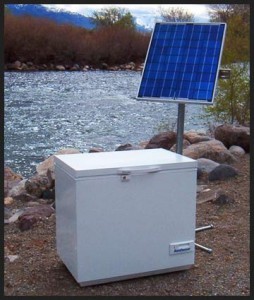 Co-developers, Mike Ewert and David Bergeron, worked on NASA’s Advanced Thermal Team to develop solar refrigeration technology to cool habitats in space. They also realized the need for a comparable solar refrigerator that could operate in conjunction with the simple solar lighting systems already in place on Earth. A modified lunar “solar photovoltaic heat pump” was developed to produce a refrigerator with a vapor compression, battery-free cooling system that converts electricity from solar panels into thermal energy stored internally, using low-cost phase-change materials that control temperature swings. This system eliminates reliance on an electric grid, requires no batteries, stores thermal energy for efficient use when sunlight is absent, and works anywhere in the world.

Such a scalable, energy-efficient resource can be an incredible asset in places people don’t have refrigeration, including remote medical centers and underdeveloped areas. Electricity is essential for storage of vaccines and medicine. This technology can greatly reduce the cost and increase the availability of vaccines delivered to the most impoverished regions of the world.

The solar powered refrigerator has been approved by the World Health Organization to provide cooling for vaccines in developing countries – a direct result of NASA’s two-way technology transfer.

According to Mike Ewert, this is just the beginning, “The NASA battery-free solar technology could be used to cool milk, produce or other consumer products in under-developed regions around the world, thus creating economic opportunities and improving lives on Earth.”

This technology is part of NASA’s Innovative Partnerships Program, which seeks to transfer technology into and out of NASA to benefit the space program and U.S. industry. NASA invites companies to inquire about the licensing possibilities for the Solar-Powered Refrigeration Technology (MSC-22970).

For information about this and other technology licensing opportunities, contact: NASA Johnson Space Center, Strategic Opportunities and Partnerships Development Office.